Modern music groups and concert programmers everywhere, take note: this is how to successfully integrate pop/rock and classical music in one show.

Of course, plenty have tried. In the final concert of their 2011 residency at (Le) Poisson Rouge in Manhattan’s Greenwich Village, Ensemble ACJW seamlessly wove arrangements of songs by Thelonious Monk, Radiohead, Pink Floyd, and jazz/pop singer Vienna Teng into a program alongside works by Bartók, Chopin, and the English madrigalist John Wilbye. The result was a truly complete show with an arc and a story, not a mish-mash of various pieces strung together in a recital. Each piece affected the sound of all the other pieces, and, as the cliché goes, the end result was greater than the sum of its parts.

This was most evident during the third and fourth pieces of the program: a one-two punch of Oscar Bettison’s Breaking and Entering (with Aggravated Assault) and the second movement from Bartók’s Fourth String Quartet. Bettison’s piece, scored for electric strings, heavily distorted trumpet, bass clarinet, and percussion, was like classical heavy metal. By far the loudest piece of the night, it is centered around a funky drum beat with frequent rhythmic tricks, using odd meters and occasionally breaking into jarringly syncopated rhythms. The piece betrayed a strong prog rock influence with a dash of math metal, especially apparent when the crazed tremolo bowing of the strings started to sound like a double bass drum. Brandon Ridenour’s trumpet took on an electrically modified percussive effect, adding to the chaos. At the core was a deceptively simple, rock riff that seemed to be inspired by the sound of a house alarm (hence the title), but with a dark and twisted sound produced by the electric trumpet and thick articulation of the bass clarinet. In short, ACJW absolutely slayed this piece, drawing a raucous applause from the crowd and helping to break the ice in a room that didn’t know how to react to this unique program. 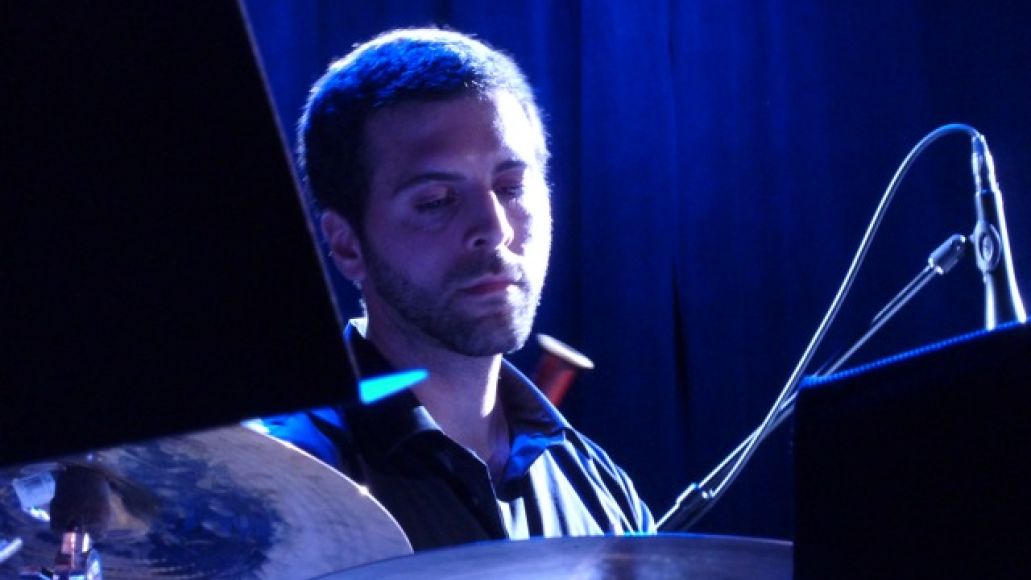 Following Bettison with Bartók was a stroke of genius, as the string quartet took the metal drive and passion of the former and applied it to the latter. This Bartók movement is basically a scherzo, a fast, whimsical, and mischievous piece. In the context of this concert, the players brought out a more energetic, hard-edged and intense Bartók. Basically, they rocked it out. Their pizzicato was strong and direct, with a forceful and percussive drive in the cello. Played almost entirely with mutes, the piece has an ethereal and eerie sound quality, complementing the electronically distorted Bettison.

The concert opened with an arrangement of Thelonious Monk’s “‘Round Midnight”, a jazz/blues standard that, in the hands of this classical ensemble, sounded surprisingly flowing and natural. Beginning with a lyrical, bluesy solo from cellist Hamilton Berry, the melody moved to Ridenour’s hushed and pensive muted trumpet. Michael Zell, holding down trap drum duties for the evening, set the mood of the show perfectly with a swinging shuffle beat. Being a modern chamber ensemble, the group worked in moments of dissonance and breakout bits of melody from various wind instruments, reminding us that this was not a jazz combo. 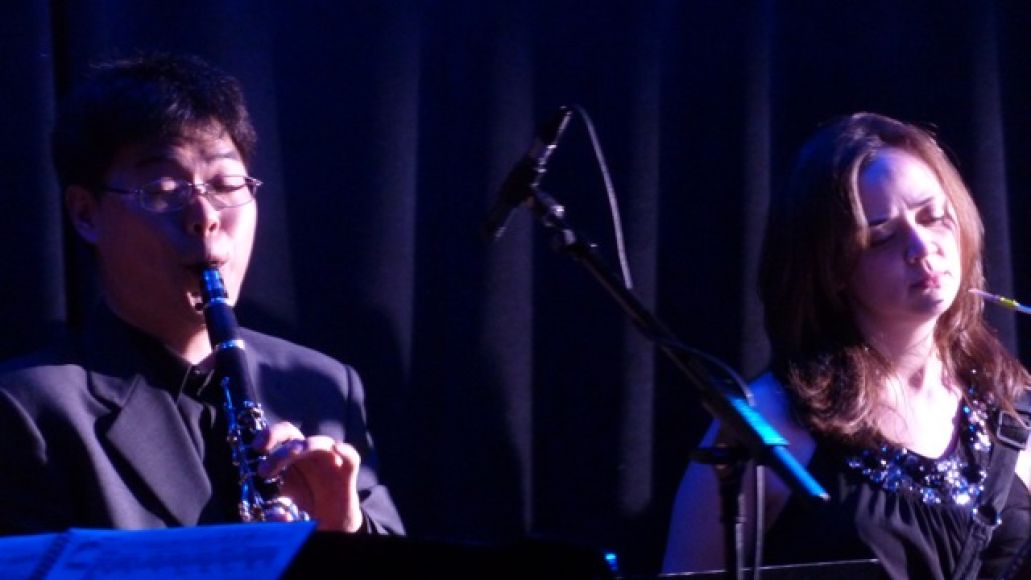 The final segment of the program was the real champion, and Ridenour, who arranged all these works for this large chamber ensemble, deserves much of the credit for its success. Stringing together four pieces with effortless segues, and juxtaposing music that seemed to beg to go together, Ridenour created a perfectly satisfying musical experience where individual songs lost their identity and became part of a larger, fluid meta-composition.

Strings began Radiohead’s “Melatonin”, an EP track from the OK Computer era, with a chorale-like texture, a sound that would return often throughout this final portion of the show. Trombonist Richard Harris handled Thom Yorke’s vocal melody with a warm echo effect that still maintained the signature edge of Yorke’s voice. The strings switched to a more ambient effect with muted glissandi for the final melody, which gave way so perfectly to the opening chords of Teng’s “Pontchartrain” that I didn’t realize one song had ended and the other had begun. 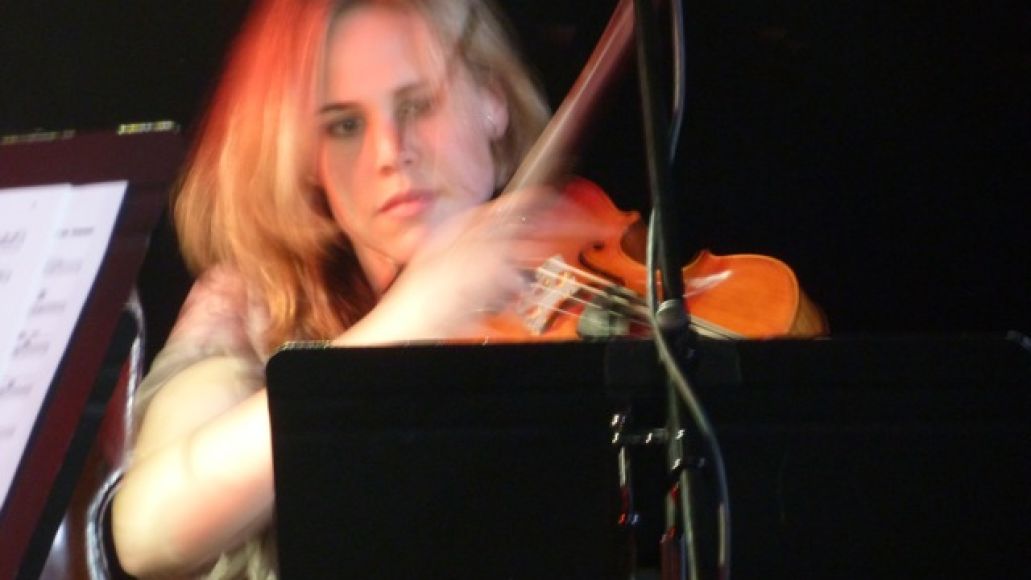 The texture of this vaguely impressionistic, jazzy song, with its melancholy melody and broken chord harmony, gradually filled out as the entire group ambled into the song, culminating with a gorgeously sublime, brass chorale. Using the unique combination of French horn, trombone, flugelhorn, oboe, and piano, this Baroque-ish chorale was a nice link to the opening sound of the Radiohead song, and also an intensely moving and emotional peak in the flow of the set. Bassoonist Shelley Monroe Huang, who ably handled her instrument, was not as successful when she sang the final line of the song. However, the final lyric “Listen: ever-so-faint slow tambourine is marching back through time,” provided a logical connection to the next song.

Going into this concert, I knew that ACJW would be performing a Pink Floyd arrangement, and I was hoping for one of the longer, classically inclined songs: “Atom Heart Mother”, “Echoes”, “Dogs”, or “Shine On You Crazy Diamond”. I was disappointed when I saw the program listed “Time” as the Pink Floyd selection. Really? With all the orchestral moments in Floyd’s career, why play one of their most conventional, radio-friendly hits? But ACJW lay my doubts to rest immediately, as the final chord of “Pontchartrain” revealed a light, steady eighth note beat on high pitched drums – the ticking of “Time”. ACJW played only the opening, pre-lyrics section, with two percussionists handling the intricate drum parts, and the entire group playing the dramatic chords, with the trombone giving the bottom end a particularly badass “Imperial March” sound. The ethereal bell-like synths of the original were played by a variety of wind instruments, which offered a rather minimalist take on the classic. 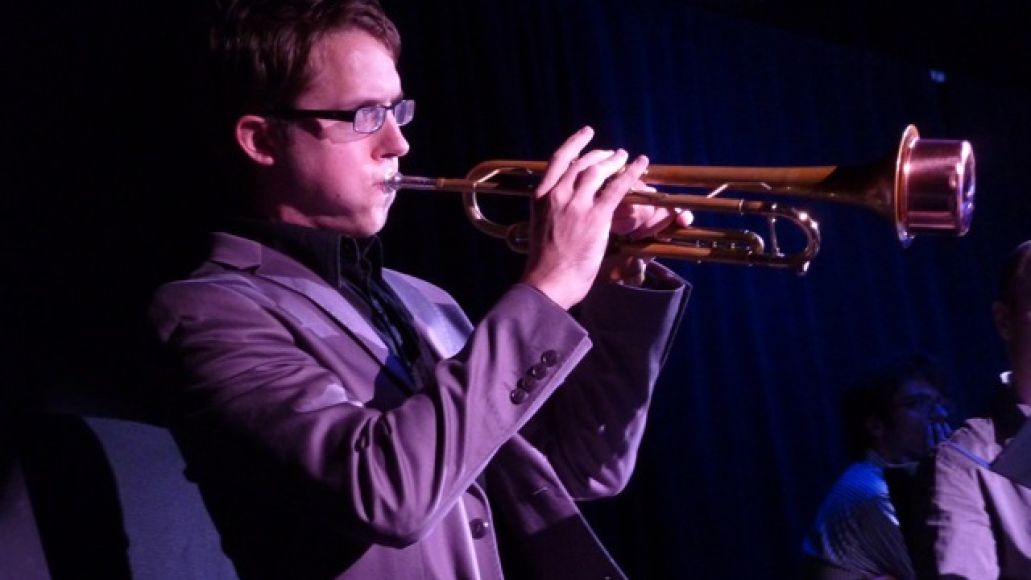 Right at the moment where the lyrics would begin, the group instead extended the final chord of “Time”, and out of that grew the opening melodies of John Wilbye’s masterful Draw On Sweet Night, a madrigal written in 1609. Called “perhaps the greatest of all English madrigals,” this polyphonic song, originally for six voices, felt right at home with the full sound of the chamber orchestra. Again, the chorale-like homophonic moments, so common to Baroque music, provided a thread to similar moments in “Pontchartrain” and “Melatonin”. Wilbye’s expressive and dramatic piece provided a celebratory denouement to the evening following the intense focus of “Time”.

The only piece that felt out of place and failed to really make an impact was Benjamin Britten’s Phantasy for oboe, violin, viola, and cello. It felt underrehearsed, as though the strings hadn’t played with the oboist enough. The piece used too much oboe in its lowest register, reducing it to a squawking timbre. Moreover, the folk-like British melodies and neo-Romantic harmonies of Britten didn’t work in this program of otherwise dark, brooding, or spiritual music. 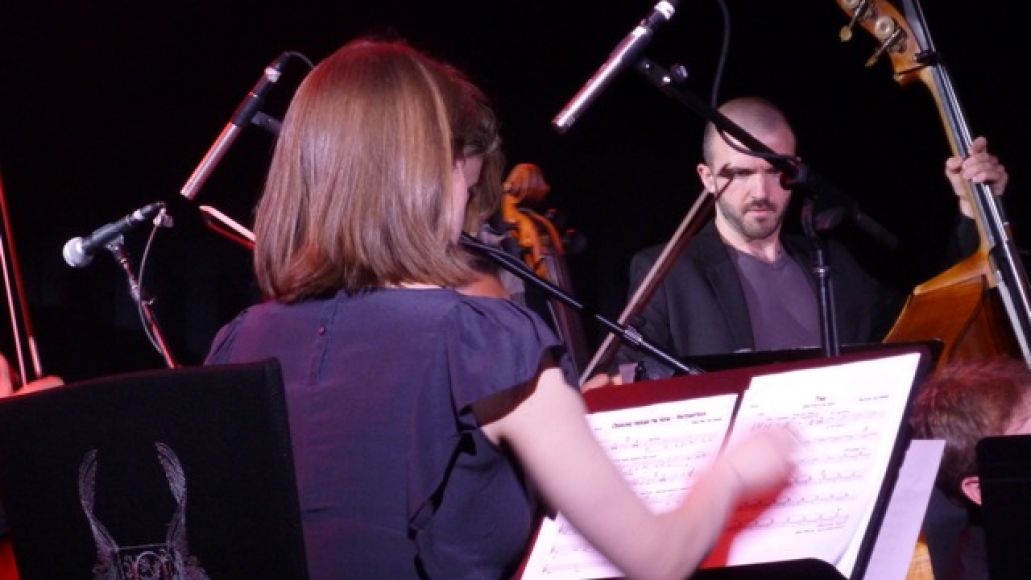 The group’s performance began with an announcement introducing the nocturnal, temporal, and phantasmagoric theme of the pieces, as well as the title of the event, “Was It All A Dream?”. It was a moment that made me wonder whether they were trying to be hipster ironic, or genuine. Either way, I would suggest they ditch any such voiceovers in the future. The music certainly spoke for itself, transporting the audience to another place and time without being told that it was supposed to. In some ways, the night was dreamlike, in that familiar musical ideas seemed to meld together in a half-familiar, half-strange way, half-remembered way.