Don’t call Florence Welch just another young female singer-songwriter. Don’t call her part of a trend, and certainly don’t call her material “chick music.” See her live, and then call her what she really is: a force of nature, a consummate performer, and someone we’re all going to be hearing about for a long time.

But before we could see Florence & the Machine, there first was Hanni El Khatib. He played an interesting but perhaps wrong-for-the-occasion set, which seemed to be less his fault and more the fault of the booking agent. The fuzzed-out acoustics didn’t do El Khatib any favors, and neither did the constant feedback issuing from his mic (although his deadpanning “That’s annoying, huh?” did win him some fans). His gritty, drum-driven rock (at moments bearing similarities to Jet and The Black Keys) was musically interesting, but it wasn’t exactly what the crowd came hungry for. It would be nice to see El Khatib again sometime in a more appropriate setting.

After the stage was cleared, a translucent veil dropped over the stage, behind which lights and movement could be seen as the crew finished setting up and musicians took their places. Every swish of the fabric induced screaming amongst the mostly female crowd. By the time the curtain finally fell, anything was possible. 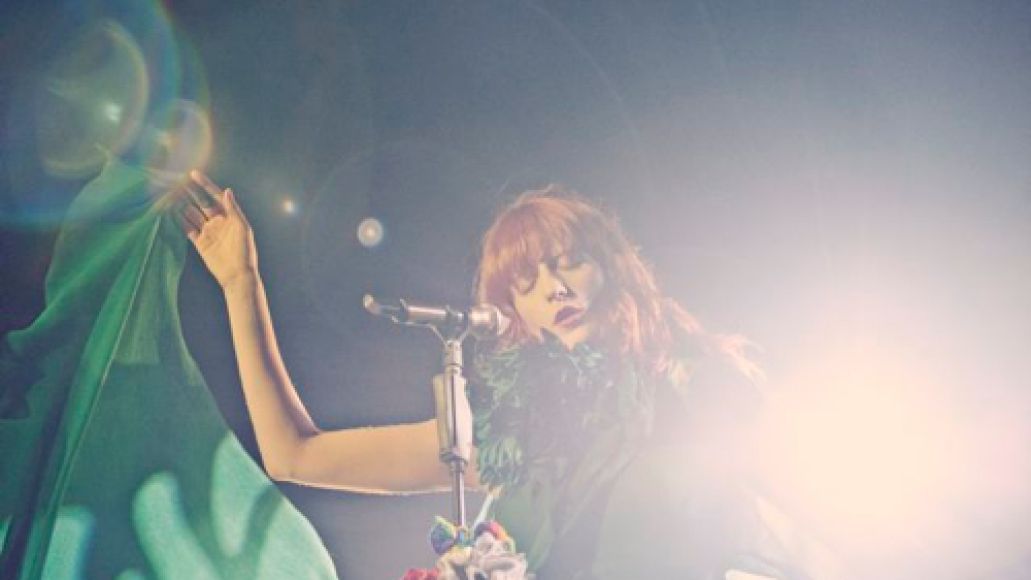 Welch stood front and center before her five-piece backing band, which included a harp. She tore right into “My Boy Builds Coffins”, much to the delight of the crowd. Immediately, it became clear that to see Florence & the Machine live is to have a different understanding of the band’s abilities. Welch was a vision in a floor-length emerald dress slit up to the thigh, exposing her bare legs as she ran barefoot across the stage and between band members, her loose red hair cascading behind her. Attached to the back of her dress was a diaphanous cape that Welch twirled about her face, cast into the air, and waved and swirled about the stage.

The visual effect of all this cannot be overstated. Welch, twisting and winding across the room, would stop, mic in hand, and reach for the Aragon’s starred ceiling, unleashing her bottomless, butter-rich voice that flowed into the farthest corners of the room. While the Aragon’s acoustics might’ve kept her commentary mysterious (“Wish I knew what the hell she was saying!” fans were heard to remark several times), no force could keep down that voice. A flick of her hair or an arm cast skyward often appeared to trigger the rest of the music, giving an impression of Welch as some kind of escaped Tolkiensian princess, the goddess of music run wild in the forest, magic flying from her fingertips at every turn. 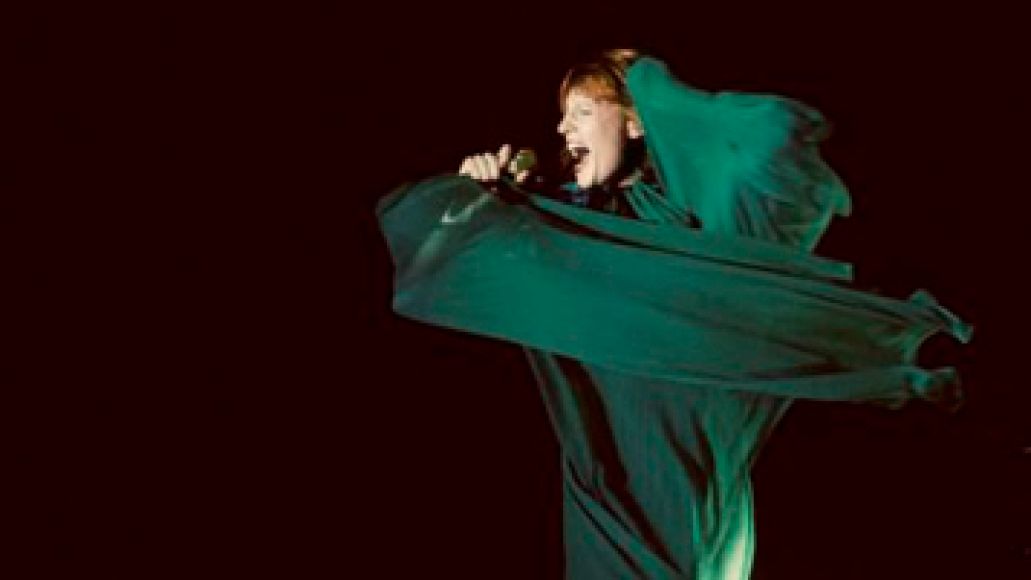 On “Drumming Song”, Welch beat dramatically on a stand-alone snare during the intro, a flare of red hair flying to accompany each beat. The chorus of that song (“sweeter than heaven/ hotter than hell”) is particularly flavored by the depth of her voice, and the recorded version simply does not compare. “Howl” similarly tore down the house, jewel-tone lights winking behind her as Welch’s voice flooded the room.

“I’m Not Calling You a Liar” was presented primarily with only Welch and the harpist playing, with a bit of guitar breaking in towards the end. The higher parts of the vocal line were so hauntingly high, so delicately delivered that they felt almost religious. Welch’s controlled, careful delivery gives the impression that she is singing at a funeral or some other incorruptible event, carefully, carefully laying line after line until her voice swoons into the whiskey-warm depths it can reach and belts out from the soles of her feet. To see her—to hear her live— is to love her, and the crowd surely loved her.

Welch closed out her set on fan favorites, playing “Rabbit Heart (Raise It Up)” before returning to an encore composed primarily of smash single “Dog Days Are Over”. But really, she could’ve played almost anything, and the enraptured crowd would’ve begged for more. Welch paused her hit song in the middle to thank her band individually and to also thank the crowd, and it’s a measure of her skill as a performer that the song lost no energy as a result. When it was all over, Welch bowed deeply, arms out behind her, and rose stately as a queen before her adoring audience. She turned and seemed to vanish into a swirl of stage-dressing smoke, leaving the air behind her sparking with the ache of her absence.