There’s an awfully narrow sect of pop/rock musicians who have PhD’s. I think Greg Graffin from Bad Religion has some PhD in Zoology. Well, John Maus is currently a doctorate candidate in political science at the University of Hawaii – Manoa, so know that the man is coming at you with some academia cred under his belt and not as some drug-addled burnout. On record, Maus ostensibly creates outsider music — bonkered-out new-wave with ostentatious synths coupled with his haunting Ian Curtis on a bad day howl in the background. It’s disconcerting, dense, and for many in my circle of comrades, rather polarizing.

His madcap performance belied the gothic introvert character found on his studio recordings. There’s no prerequisites for his live show, and any heady pretenses you may ascribe to Maus are right out. His unhinged stage presence is the stuff of effusive brags and “I was there”-isms. With just a microphone and a backing track, Maus, he — well, have you ever seen that YouTube vid, Nicholas Cage Losing His Shit? It was kind of like that, only not hilarious, and it incited the small crowd at The Empty Bottle to get moving. As he darted (with no real censor on his emotions) through songs from his latest LP We Must Become Pitiliess Censors Of Ourselves, Maus pumped up the crowd like a hype-man hyping his ultimate show before he just ends it all. He jumped up and down, screamed in and out of the mic, punched his chest, and beckoned the crowd not just to watch his songs but to be apart of them. 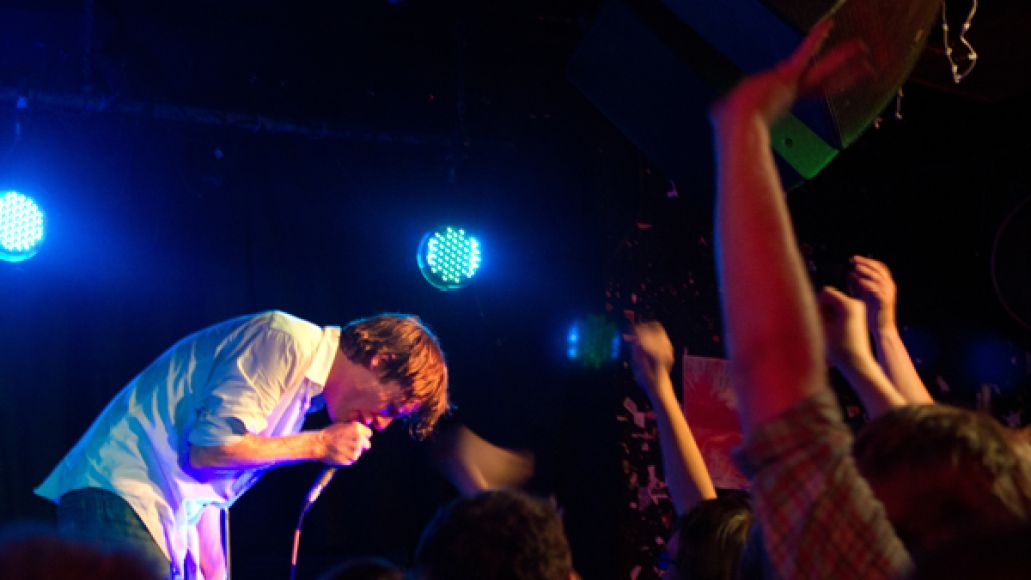 It was a micro-epic performance, with small group of Mauskateers singing along to every word. But with songs like “…And the Rain” and the closing anthem “Believer”, you didn’t need to know the songs to feel the power in the room. If you’re watching someone perform with the intensity like Maus, you can choose to surrender to his energy or ignore it. Most surrendered, hands in the air, mirroring Maus’ histrionics on stage. He turned what could have been a static, brooding, self-important music into veritable party — or as much of a party as you can really have while watching a doctorate candidate scream pitch black lyrics and tortured faces.

Puro Instinct, another girlo-fi group under the auspices of the Mexican Summer label, couldn’t have been less suited to headline this show. The hazy group led by sisters Piper and Skyler Kaplan, 16 and 23 respectively, had a ball of energy passed to them which they tossed aside in favor of a rude, almost childish demeanor that was neither hip nor fun. Additionally, there were several hitches in their getalong that interrupted the flow of the show, including breaking the kick-drum pedal, misplacing the fucking van keys (ughhh), and having no weed (ughhhhhhhhh). Look, I’ve been in all of these situations, and none of them warrant as much attention as big sister Kaplan gave it, especially to an eager crowd wondering if you were going to meet the energy that was just gifted to you in the form of a Maus show.

That being said, they sounded just fine. Like Maus, Puro Instinct has worked with Ariel Pink in the past, and their songs have that signature surf-meets-lounge feel to them that tugs at dormant memories of smokey basement hangouts and lazy beaches. It was just a whiplash bill, after seeing Maus, and the fantastic opener, the Chicago performance artist Geneva Jacuzzi (I mean, the girl was awesome). If Puro Instict played with bands that were cut from the same cloth as they were, say, No Joy or Best Coast, they could have slipped in under the radar  – but here, these high school dropouts stood out like slackers who didn’t really care about their art. Stay in school, girls. Shit, get PhDs.