In a city brimming with such storied and picturesque entertainment venues as Los Angeles, there are few privileges greater than headlining and selling out the city’s historic Pantages Theatre. Usually home to full-scale Broadway productions and the occasional hallmark performer (the last act to play there was Paul Simon), My Morning Jacket‘s place atop the marquee Tuesday night is certainly a mark of their burgeoning career. Their latest full-length, Circuital, debuted at number five on the Billboard 200, and they celebrated by taking the record on one of their most extensive tours yet, with headlining spots at this year’s Bonnaroo, Lollapalooza and Austin City Limits.

L.A.-based openers Everest brought their vaguely Southern-inflected brand of rawk to the show, favoring cuts off of last year’s On Approach. The hometown crowd graciously took in their riff-heavy tunes, many of which were strangely evocative of Stillwater, that ridiculously awesome yet regrettably fictional band from Cameron Crowe’s Almost Famous. Bo Koster, keysman in My Morning Jacket, added touches of piano on several tracks. The end of Everest’s seven song set came far too soon, concluding with a spirited take of an untitled song off their forthcoming record.

My Morning Jacket took to the stage right on time, to the fanfare of Circuital‘s larger-than-life opener, “Victory Dance”. Moving deftly between songs old and new, the five-piece displayed a stunning level of virtuosity as they performed a set that dipped deep into their fast-growing catalog (they played tracks off of five of their six albums, including “the Bear”, a deep cut off of 1999’s The Tennessee Fire). The band showed up in full force, especially in the case of Carl Broemel, who kept himself busy adding sax and lap steel touches and ripping solos, as on “I’m Amazed”. Patrick Hallahan filled the Pantages’ cavernous hall with his fills and crashes. 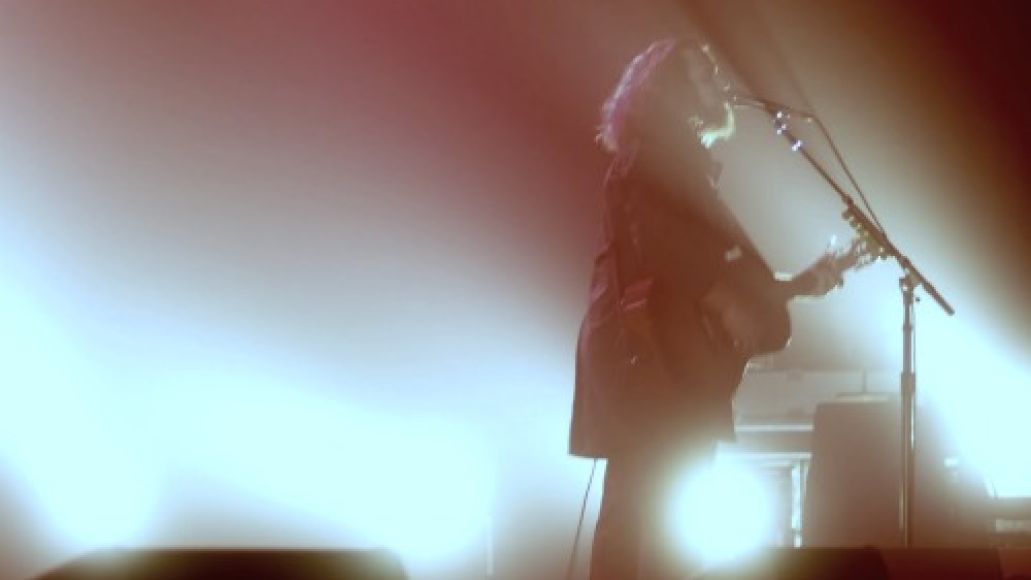 It’s easy to tell how strongly the guys feel about their latest record; they played all 10 of its songs Tuesday night, showcasing the extent of its versatility as they leapt from the bombastic “Victory Dance” to the arena-sized alt-country of “Circuital”. Seeing the band tie together the rather disparate corners of their career:  dub-flecked fan favorite “Off the Record” and the cathartic build of 2009’s Evil Urges‘ “Touch Me I’m Going To Scream, Pt. 2” led naturally into Circuital‘s “First Light” and “You Wanna Freak Out”. The album’s calmer moments reverberated flawlessly under the mile-high ceilings: the paced blues shuffle of “Outta My System” and reflective strums of “Wonderful (the Way I Feel)” sounded perfectly at home under the Pantages’ lavish chandeliers and plush assigned seating. Assigned seating and rules didn’t stop fans from rushing stage-side when “One Big Holiday”‘s memorable opening lick rang out, though. An all-too-brief encore was made up of  ”Steam Engine”, “Smokin’ From Shootin'”, the wild outro to “Run Thru” and 2003’s It Still Moves’ brilliant opener “Mahgeehtah”. As he thanked the full house for the last time, frontman Jim James commented on how immaculate the Pantages’ architecture is. It isn’t often that any band is lucky enough to grace its stage and My Morning Jacket were picture-perfect there Tuesday night.