Just in time for their 2011 Summer Tour, which began Memorial Day weekend on the former site of Woodstock, Phish released their best live show of 2010 in a DVD/CD combo box set on May 24th. Titled Phish – Live in Utica, the box set chronicles the complete live show from October 20, 2010, a performance that has since been named the unofficial best show of the year by a number of Phish phans. So if you’re a Phish Head, it’s a no brainer: you will purchase this box set, and it’s worth every penny. But what about the casual fan, the new, young fan, or the complete neophyte who wants to know what Phish is all about?

As a physical box set, there’s not much that would entice you into buying this. Live in Utica is packaged simply, not unlike any number of multi-disc television series DVDs. Blinding white lights flood the cover photograph, showing mostly the audience and the geometrically-intriguing roof (the Utica Memorial Auditorium was the model for Madison Square Garden). Inside, the contents are no more than two DVDs and two CDs, along with a paltry booklet listing the band and crew, and providing a couple of choice photographs, including the now-infamous “Guyutica” dude (more on that later).

In many ways, the relative austerity of this set reflects the realities of Phish’s enterprise in 2011. Touring with a complete HD video crew and filming every show for potential release, Phish can create a marketable DVD package like this whenever they like. They’ve already released one of the better shows from the summer of 2010 in this format. More importantly, Phish is (thankfully) an actively touring band, something that couldn’t be said for most of the 2000s. If Phish were still officially broken up, then releases such as this would take on the added onus of villing a void, and thus their packaging might amp up a bit to help fill that void. They might include a few pieces of replica memorabilia, an essay from a frequent Phish commentator, or a glossy photo book to help you remember the good times. In fact, this is precisely the model the Grateful Dead has used recently, offering their fans a truckload of special extras: replica ticket stubs, bonus CDs, essays, snazzy packaging, behind the scenes DVD featurettes, etc. 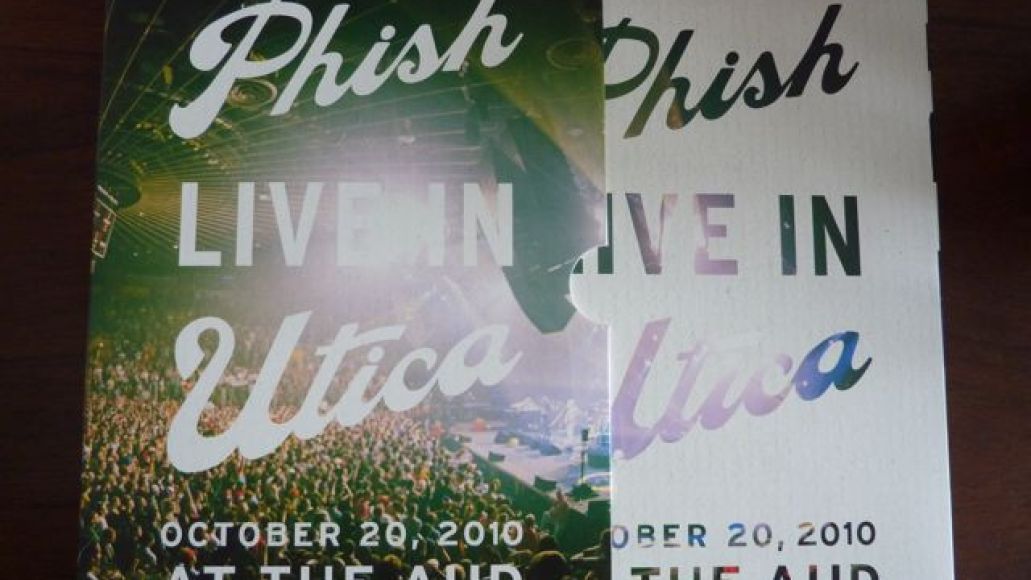 For Phish Heads, this DVD situation is a good thing. It reminds us that Phish is no longer defunct, and that we don’t need to live in a pre-packaged nostalgic past. This box set is a record of the show, nothing more. Luckily, both the video direction and, most importantly, the music from this show, are sublime.

Phish is known as a jam band; yet, for much of the time since their 2009 reunion, Phish has shied away from the types of hard core improvisational segments that equally made as many fans as it did haters. Honing their craft on their considerably difficult compositions, Phish has been cranking out quality shows with well-played songs and fun, typical blues-rock jams. Less frequent are the moments where Phish abandons form, structure, and familiarity, and leads their audience into uncharted musical territory. Utica is an example of the latter.

The show is peppered with intelligent, mystifying, dark and demented, psychedelic, and blissful jams from start to finish. The first set “Wolfman’s Brother” opens into a deep puddle of white-boy funk, segueing effortlessly into Phish’s slowed-down version of the Talking Heads’ “Cities”. “David Bowie” takes listeners on a journey through a proggy, contrapuntal composed section before depositing them in a dark modal jam that creeps upwards to a blinding, psychedelic release. The second set’s “Sand” finds guitarist Trey Anastasio gradually building a minor-key funk jam with soaring lead guitar lines. The set-closing segment of “Split Open and Melt” finds its way into mellow ambient space following the reggae lilt of “Have Mercy”, finally leading to a build through “Piper” back into the frenzied peak of “Split Open and Melt”. 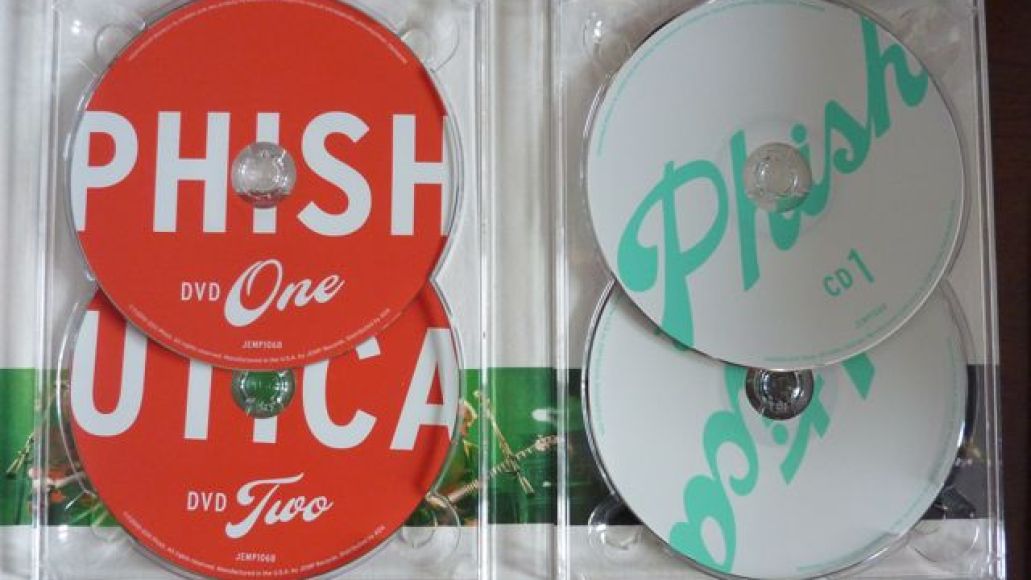 While the music stands on its own, the video captures the energy of the audience and the virtuosity of lighting designer Chris Kuroda like no other Phish DVD. Kuroda is often called a fifth member of the band, sometimes as active a member in the group improvisation as any band member, and Live in Utica ably demonstrates his jawdropping skills. Thanks to a new HD camera positioned at the front of the soundboard, the head-on view of an indoor light show appears for the first time on an officially released video. The lights take on a three-dimensionality that is seldom captured accurately on film, and the sequences of intricate movements dance across the screen gracefully. Watching Kuroda navigate the composed section of “David Bowie” on lights is as impressive as hearing the musicians play the tricky passages.

In the past, videos often relied on the footage shot by the venue’s cameras. Cuts were often mistimed or erroneous (e.g. showing the guitar player during a bass solo), and there was no opportunity for post-production editing. Not so with this release. Shot with eight cameras, and edited by someone clearly familiar with the band’s music, the shots are well-chosen and illuminating, with closeups of keyboardist Page McConnell’s hands on his grand piano, or Anastasio’s nimble fingerwork. Unlike the theatrical release of 2009’s Festival 8 in 3D, the cuts are never too quick, nor do they linger long enough to get boring. For a band with little stage theatrics themselves, this concert footage abounds with high-octane energy and dramatic excitement.

The two CDs seem to be included out of convenience, although for some fans who only listen to mp3s, the CDs will be an eye-opener. Worse, the CDs do not contain the complete show, with the less-exciting opening of the first set, as well as the second set’s botched “Tela”, omitted to make the show fit on two discs. 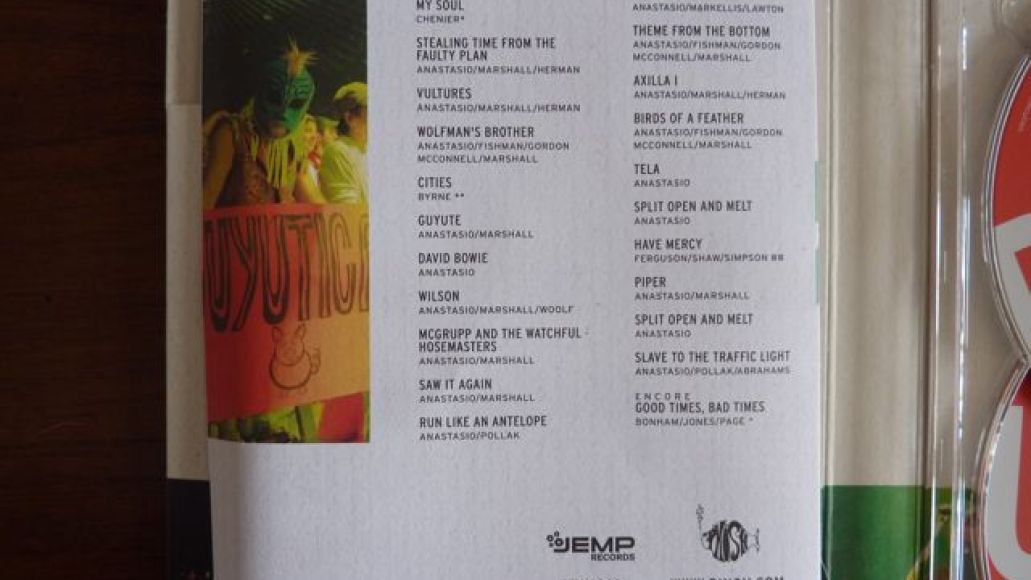 More than anything, a certain Phishy humor, whimsy, and playfulness runs through every part of this show, and that’s part of what makes it so good. Even for the uninitiated, the focus and energy sensed in this video and this music are a sign that something special happened in Utica last October. One creative fan merged the song “Guyute” (pronounced “guy-ooo-tee”) with the hometown, making a sign that requested “Guyutica” and standing in the front row…wearing a lucha libre mask. After honoring his request, the band wove the melody and even lyrics of “Guyute” into every remaining song of the first set, sometimes altering them to startling effect, and helping to create an atmosphere of silliness that many phans felt was missing from 21st century Phish. Ditto for the creative setlist manipulation to close the second set, sandwiching two songs within another one’s jam. It serves as a reminder that this dorky group of musicians from Vermont are still capable of magic in this decade.

Even if you’re not a seasoned Phish tour veteran, this box set offers something highly enjoyable: it is a particularly detailed account of what one of the most exciting live bands around is able to create on a good night. It captures the mindnumbing visuals of the Phish light show and offers viewers an introduction, or a re-introduction, to a band that values its fans enough to release low-priced box sets ($32.99) showcasing an exemplary performance. With a couple of stellar shows already under their belt in 2011, it might even persuade you to head down to your local amphitheater to see, and hear, the madness unfold.