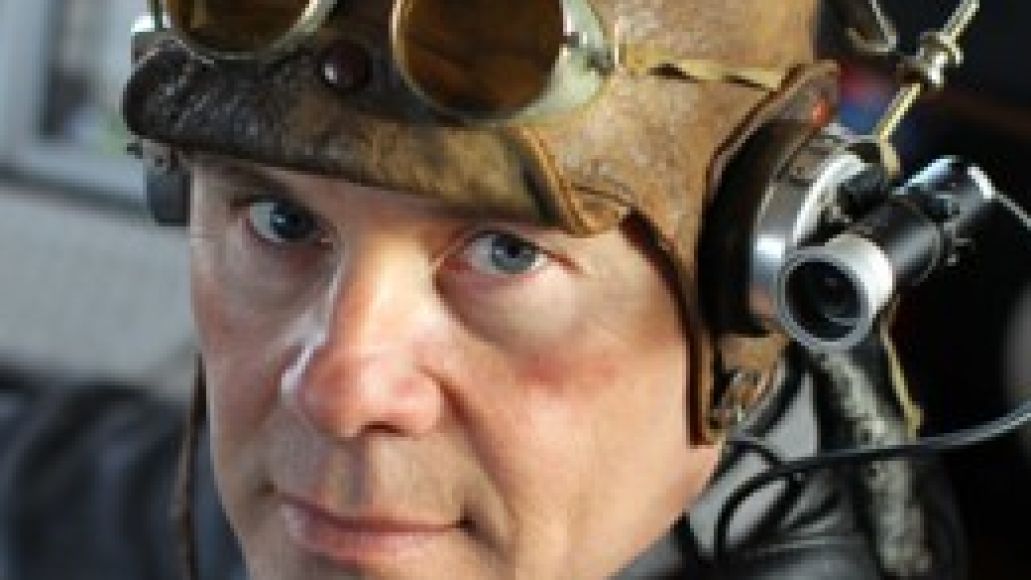 Thomas Dolby is a legend of synthesizer music. Most people know him for his mega-hit, “She Blinded Me With Science”, but the seasoned aficionado will know him as the wizard behind some of the most emotive, innovative electronic art pop of  the age, including not just his solo work, but his collaborations with Foreigner, Prefab Sprout, Ryuichi Sakamoto, and Trevor Horn, among others. Dolby left the music scene in the early ’90s to make it big in Silicon Valley by inventing the polyphonic ringtone, and returned in 2006 with a fantastic live show. Now, he’s on the verge of releasing his first studio album in 20 years. But this is no mere album release. No, this new album, A Map of the Floating City, is something of a concept album, preceded by an unprecedented experience: a community-based web game based on Dolby’s entire discography.

The game, also called A Map of the Floating City, is both a trading game and a roleplaying game, set in a post-apocalyptic 1940s, in which world-weary tribes attempt to sail the seas towards magnetic North, where the legendary Floating City resides. The game offers fans a chance to experience Dolby’s catalog in a new way, and gives new listeners a chance to be introduced to his incredible music, as well as a way to earn downloads of Dolby tracks. The grand prize is even more exciting: a private concert of the album in its entirety for the winning tribe. To pull off this incredible feat, Dolby enlisted the help of one of the leading minds behind alternate reality gaming, Andrea Phillips.

Consequence of Sound reporter and Nerdy Show host Cap Blackard, along with Nerdy Show‘s Sci-Tech correspondent Jon West, spoke to Dolby and Phillips about their visionary new project. Find out how it works, how it came to be, notes on a forthcoming world tour, early tales of D.I.Y. synthesizers, the exciting world of transmedia, and more, below.

To hear the interview, as well as our full chat with Phillips, head on over to the Nerdy Show, where it’s featured in the latest episode.

A Map of The Floating City will be your first studio album since 1992. The original plan was to do three EPs after the album’s release, each of them embodying different sounds from the album. But, much to everyone’s surprise, the third EP was folded into a much bigger project:  The Map of the Floating City game. What was the genesis for this project?

Thomas Dolby: Well, during the 20 years I wasn’t making any music, while I was in Silicon Valley running Beatnik, my company, I was amazed to see that, on the Internet, there were little news groups and forums that sprung up, where people would analyze my lyrics, and my songs, and, in some cases, take on roles and characters from the music, and even write, sort of, collaborative fiction, like fan fiction. I started to feel like one of those guys that died and just got bigger, and so I was determined to try to get my arms around this, when I made my new album.

I’ve been working for a couple of years on A Map of the Floating City, which has three continents to it. Each one has a distinct musical flavor. The first two came out as EPs. One was just for my fan club only, and then Oceanea in March was generally released. The plan had been to do a third EP, called Urbanoia, prior to the album, but I came up with the idea of folding it into, as you say, a much bigger project. I liked the way that all of the people, places, and ideas from the songs seemed to have a sort of continuum to them. So, I put everything into a big database, and then I met Andrea Phillips, a very well-known game designer, and we talked about it, and she said, “You know this has really got a good basis for a trading game.” So, she educated me about that, and I really set about working on the back-story, and figuring out how trading could be the basic day-to-day mechanics of the game, with a much more intriguing, mysterious back-story going on, which would encourage people to stick with the game and solve puzzles.

The game is set in a really unique, post-apocalyptic world. I was wondering what you could tell us about the cataclysm that reshaped the Earth in your vision. I’ve seen a couple of different versions online, and it’s not clearly presented to the average gamer of Map of the Floating City, but the information is out there. What’s your definitive version?

TD: I think there’s been a lot of speculation among the players, which of course Andrea and I love. What we tell people in the game, is that there was some sort of cataclysmic event, which altered everybody’s brain chemistry to the extent that people don’t really remember what happened before. It’s set in the 1940s, which I think was a really fascinating time for technology, and for people, in general. I live on the North Sea of the east-facing coast of England, which faces Germany. So, there’s the relics of two World Wars all over the beach, here. There’s huge concrete blocks designed to stop tanks, and the remains of experimental weapons, like poison cluster bombs, and even, theoretically, a way to set the sea on fire by pumping oil into it, and igniting it.

And, close by here, there were experimental RAF bases where they were working with things like death rays, where you could point things like sine waves at distant bomber pilots, and disorient them so they would crash into the sea. So, the scientists in the 1940s were under this intense pressure to come up with what would give them an advantage over the enemy, and yet the people around here were living in this constant fear of being invaded and occupied by Nazis at any time. So, it was really an extraordinary period of time that might so easily have turned out very differently.

I was wondering how you and Andrea met. What were the circumstances?

TD: Do you remember, Andrea?

Andrea Phillips: I remember…I think that a friend of mine just introduced me to a friend of yours, who introduced me to you. It was really kind of a funny thing. I mean, to be honest, I didn’t plant this seed of a game. Thomas was already thinking along those lines. He was already thinking, and he had this fantastic, gorgeous vision, even before I came along. It’s been my role in this to do the very boring thing, and turn it down to sets of rules and code, to make everything much, much more dull than it was in his head.

TD: Well, I think realism, actually, is what Andrea calls it.

TD: I’ve made software before, and I’ve made Web sites before, but I’ve never really, you know, designed a game.  So, I think the filtering that Andrea’s sensible mind has brought to the project was far from making it boring. Occasionally, we’d come to blows about what should or shouldn’t happen, and in her infinite experience in how you do and don’t treat the player, and to what extent you can depend on the gamers’ existing sensibilities based on their experience from other games, versus introducing completely new concepts to them, has been incredibly valuable. And, realistically, even when Andrea puts her foot down and says, “No, you can’t do that,” it sort of forces me to go back into myself, and think of a more ingenious way around it.

AP: Isn’t that always the way, with every creative limitation though?