A good buddy of mine never goes to shows. I always try to drag him with me, but it usually never works out. So when he expressed interest in attending this one, I couldn’t have been more happy/apprehensive. I told him about JEFF the Brotherhood — a pair of all-denim-everything good ol’ boys from Tennessee playing loud, chicken-fried CBGB’s stuff. And then I told him about Fucked Up — a six-piece Canadian hardcore outfit, vanguards of the genre, who just wrote an involuted rock opera that makes Zen Arcade seem like Bye Bye Birdie (the themes and nature of David Comes To Life are actually closer to Dream Theater’s Scene’s From A Memory, Pt 2 but I shudder to faithfully compare the two albums). This was a great show for him to see, but I was worried. For someone with more gum than soul on his shoe as far as rock concerts go, this was going to be a high-decibel, male-centric, slam-dancing, guitar-extravaganza that would surely drive this polite guy away from ever seeing a show again, right? 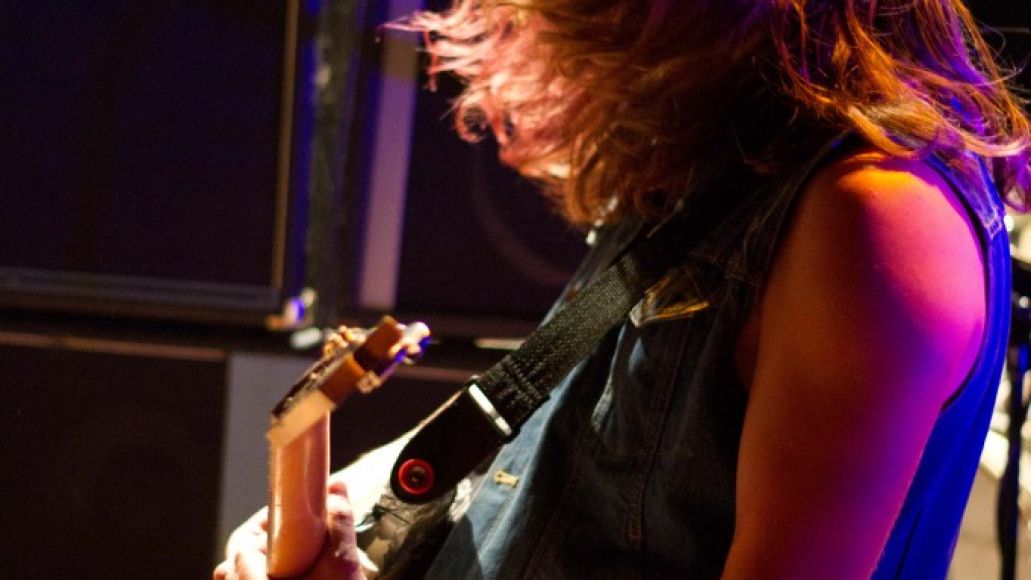 The two brothers — yes brothers — from JEFF the Brotherhood announced their presence to the room sans microphone, which created this sort of awed hush soon to be felled when Jake Orwall slung his guitar over his denim vest and Hooters tee and Jamin — yes Jamin — manned the drum kit. I’ve been told that these two guys destroy live, and yeah they kinda did. Hair and riffs were flying every which way without pretense and that raw proto-blues and punk sound made perfect sense why Jack White signed them to his own label Third Man Records. It was a mix of White Stripe-y blues, Death From Above 1979-y dance-punk, and all the stage theatrics of Led Zeppelin-y metal. Jake would lean one foot against the rail of the photo pit and solo, wander out into the crowd and solo, hop up on the bar in the house and solo, all while staying musically tethered to his bro on drums. It was a neat thing to watch the two really love playing and connecting with each other, especially on the uptempo highlight “Shredder”. And closing with “I’m A Freak” with Jonah Falco from Fucked Up doubling up on drums was a good final firework that finally had the crowd at the fervor the Brotherhood deserved.

When Fucked Up’s front-bear Damian Abraham took the stage, it was like a pop star walked in backed by his entourage. The other five members took their place on stage and Abraham was immediately down standing at the photo pit barricade. He’s such a gentle dude with this big shit-eating grin on his face until he starts barking like a dog from hell. His brow furrowed just as the wave of guitars from the opening number “Queen of Hearts” crashed out of the PA, and no sooner did he expel the first lyric was Abraham plunging the mic into the crowd offering it up to the exuberant fans.

Unlike JEFF the Brotherhood, Fucked Up relies on Abraham to detach from his cocksure band and exist in the crowd, which he did for the better part of the show. He snaked through hundreds of people painting every corner of the floor (and many people’s faces) with his sweaty, shirtless torso. At one point, crowd members even hopped on his back. But it wasn’t some cheap act — Abraham just wanted everyone in on what he loves so much, even if you’re like my buddy and had no idea what Fucked Up was about. It’s a throwback to an 80’s hardcore managed by a guy who doesn’t really want to fuck up the system anymore but would rather just have fun screaming about doing so. 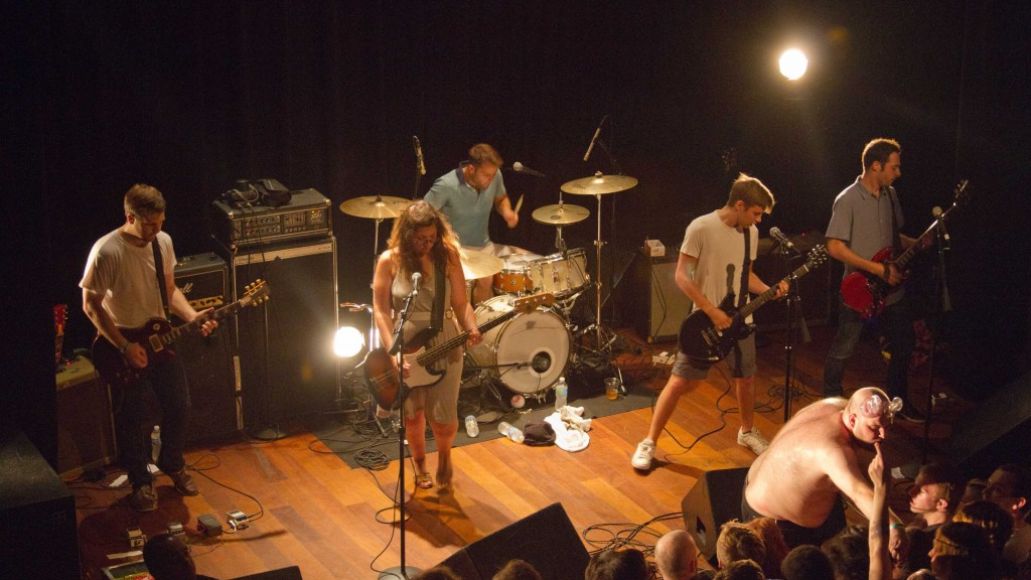 Abraham is the focus of the show, but without Mike Haliechuk, Jonah Falco, Sandy Miranda, Ben Cook, and Josh Zucker on stage recreating everything from the three-part guitar lines of newer tracks like “A Little Death” to the hardcore simplicity of “Police”, which spun the whole place into a frenzy, (including a dude who hopped up on the bar and dove into the mostly unprepared crowd) the whole thing would have fallen flat — like bar-diver dude. The energy and noise Fucked Up sustained for well over an hour had everyone rapt and ready, including my buddy. He liked it a lot, and though he wasn’t in the snarling pit or screaming lyrics into the microphone like much of the crowd, he did go up and give Abraham a big, wet bro hug. Can’t get that at home/many other shows, can you?

Live Review: Fucked Up and JEFF The Brotherhood at Chicago's Lincoln Hall (7/2)