After spending my formative years listening to The Big Come Up and seeing The Black Keys live for the first time during my freshman year in college, I felt like a proud parent watching them at the Roy Wilkins Auditorium in Saint Paul Sunday night. Listening to 7,000 concertgoers chanting, “Black! Keys!” while a blinking marquee ascended above the band—where, just moments before, a disco ball the size of the world’s largest ball of twine dangled—had some unexpected effects. Regardless of how many theoretical tears appeared in my eyes, the band put on the best show I’ve seen from them, and one of the best shows I’ve seen period.

Openers Cage the Elephant started with “2024” off of 2010’s Thank You Happy Birthday. “Ain’t No Rest For the Wicked” earned an approving roar from the audience, but “Sabertooth Tiger” really got everyone riled up. Frontman Matthew Schultz crowd surfed and actually managed to stand up on the audience’s hands. A stagehand held his microphone cord from the stage like a leash, good-humoredly bobbing his head the whole time; eventually, Schultz was returned to the stage. Cage the Elephant finished their precisely 30-minute set with more new material, thrashing and writhing about before Schultz’s band mates threw their instruments around on the stage and walked off with a cursory wave to the audience.

And then The Black Keys arrived, opened with “Thickfreakness”, off of 2003’s Thickfreakness, and more or less melted faces off for the remainder of the night. The Akron duo played songs all across their discography. On older material, lead vocalist and guitarist Dan Auerbach and drummer Patrick Carney held their own; however, for more recent work, specifically last year’s Brothers,  two additional touring members picked up bass and keyboard duties. 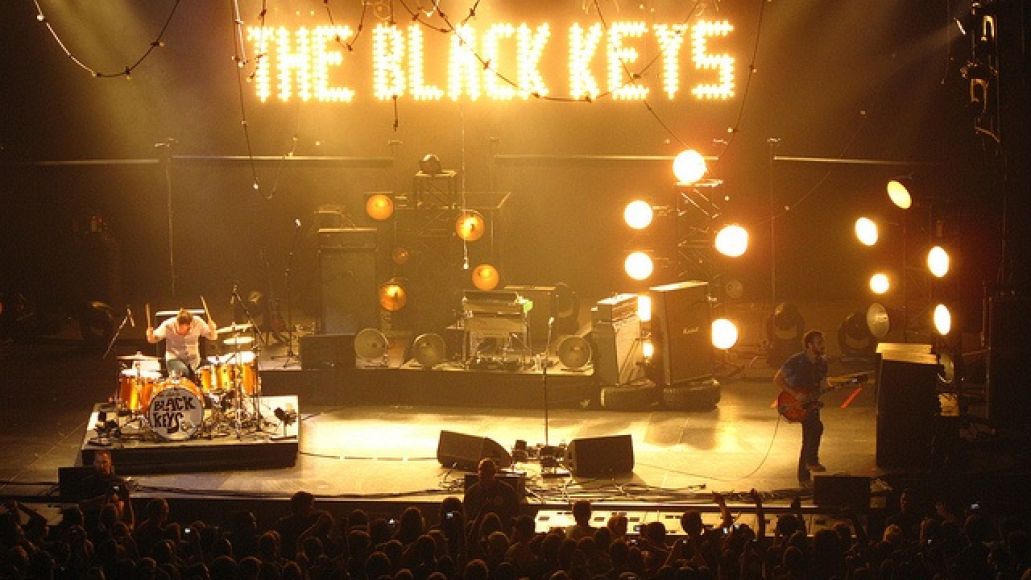 After ripping through barnstormer “Stack Shot Billy”, the two slowed it down for The Kinks cover “Act Nice and Gentle”. Following this, the opening bars of “Everlasting Light” called forth that aforementioned disco ball, which illuminated Auerbach’s already shiny falsetto. It was, to put it bluntly, “heavenly.”

Smoldering renditions of “Strange Times” and “I Got Mine”, off of 2008’s Attack and Release, ended the initial set, though a giant blinking “THE BLACK KEYS” marquee rose behind them. When they walked offstage, the words “BLACK” and “KEYS” alternated, and the audience responded accordingly. Naturally, the two returned. And with towels slung over their shoulders, Auerbach and Carney walked back onstage to play “Sinister Kid”. Speaking to the already rambunctious crowd, Auerbach asked, “Why don’t you just go a little crazy, all right?” The crowd erupted in a frenzy, all jumping together as one, as the band tore the curtains down with an explosive cut of “Your Touch”. When Carney threw his drumsticks into the audience, the chaos only evolved.

The Black Keys setlist:
Thickfreakness
Girl Is On My Mind
The Breaks
Stack Shot Billy
Busted
Act Nice And Gentle
Everlasting Light
Next Girl
Chop and Change
Howlin’
Tighten Up
She’s Long Gone
Ten Cent Pistol
I’ll Be Your Man
Strange Times
I Got Mine
Encore:
Sinister Kid
Your Touch