The first installment of SoundTown Music Festival in Somerset, WI, had a lot riding on the shoulders of 2,500 attendees. The new management of the former Float-Rite Park Amphitheater tried to revamp the arena’s image after years of Ozzfest-induced damage to the grounds and its reputation in the town of Somerset. And what better way to do it than to bring in beloved local bands with a Flaming Lips cherry on top? Granted, it’s not quite the same when a 40,000-person amphitheater is about five percent full, but who notices when you’re in the front row reaching for Wayne Coyne?

Only 30 miles from the Twin Cities, SoundTown presents a feasible music festival option for Midwesterners who are expensive plane tickets away from live music hotbeds like Oregon, California, Austin, TX (which is practically a state), and New York. Though attendance was so sparse the ticket-sellers slashed prices from $50 per day to $25 in the week before the event and at times I felt ashamed of my Minneapolis brethren for not coming (only 30 miles? For 25 dollars?) to see The New Pornographers and Okkervil River, I kind of enjoyed feeling like an intrepid festival tastemaker. 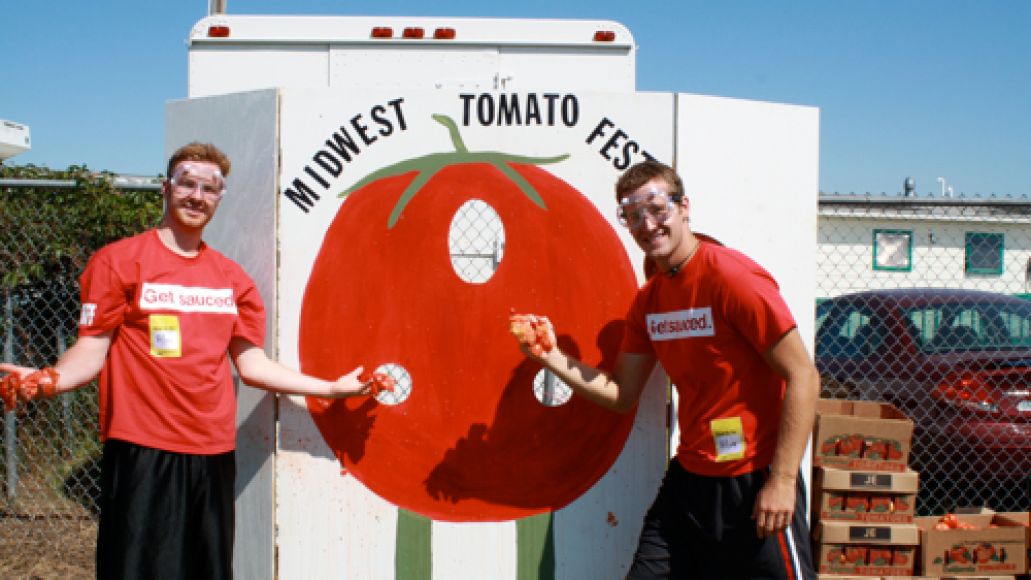 They’re already planning the lineup for SoundTown 2012. I’m hopeful but skeptical that listeners will suddenly realize that SoundTown is a bargain. As Matt Vasquez of Delta Spirit said, “We’re halfway between Minneapolis and Madison, two of our best rock and roll audiences on earth.” If the bands are already halfway there, surely Midwest music fans can do the same, especially when you can still tube down the Apple River and eat Foxy Falafel all in the same day! 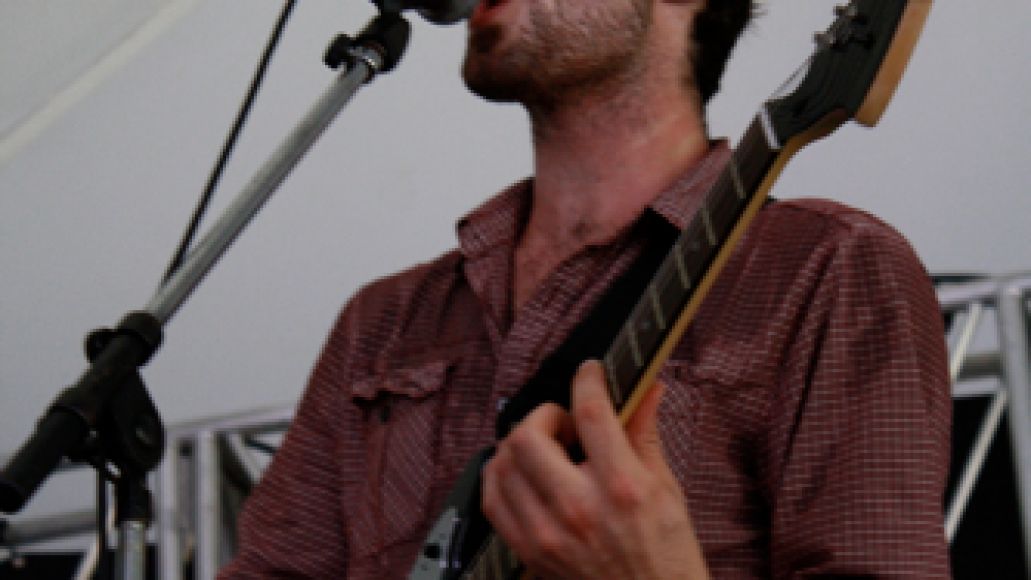 Rustpocket was one of two bands to win Metromix Twin Cities’ SoundTown Showdown, and even though I arrived late to a tent with almost no one in it, I was impressed. “We’re the first band ever to play SoundTown!” they proudly proclaimed before advertising “free CDs for sale.” I can’t say I see Rustpocket breaking into the tight-knit Minneapolis music scene, but with their expertly executed shredding and anthemic choruses, I have no doubt they’ll succeed. 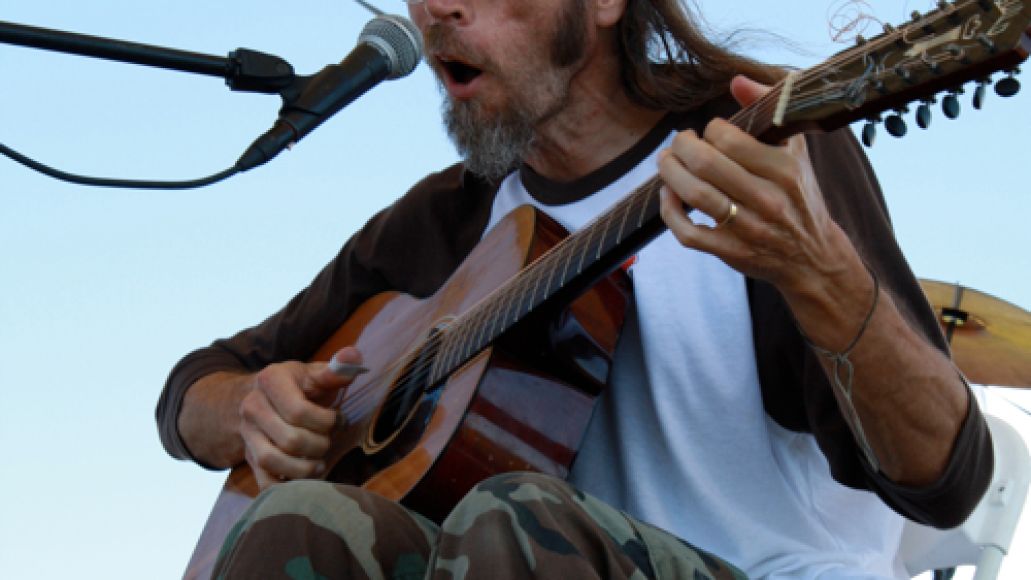 For a 12-string guitarist who plays with as much technical ability as guitar greats Leo Kottke and John Fahey, Charlie Parr had a remarkably diminutive stage presence. His between-song banter included a story about him and his son playing mini-golf after getting lost driving to SoundTown. He captivated the lawn-sitters and riled up the line dancers with old favorites like “Where You Gonna Be (When the Good Lord Calls You Home)”. 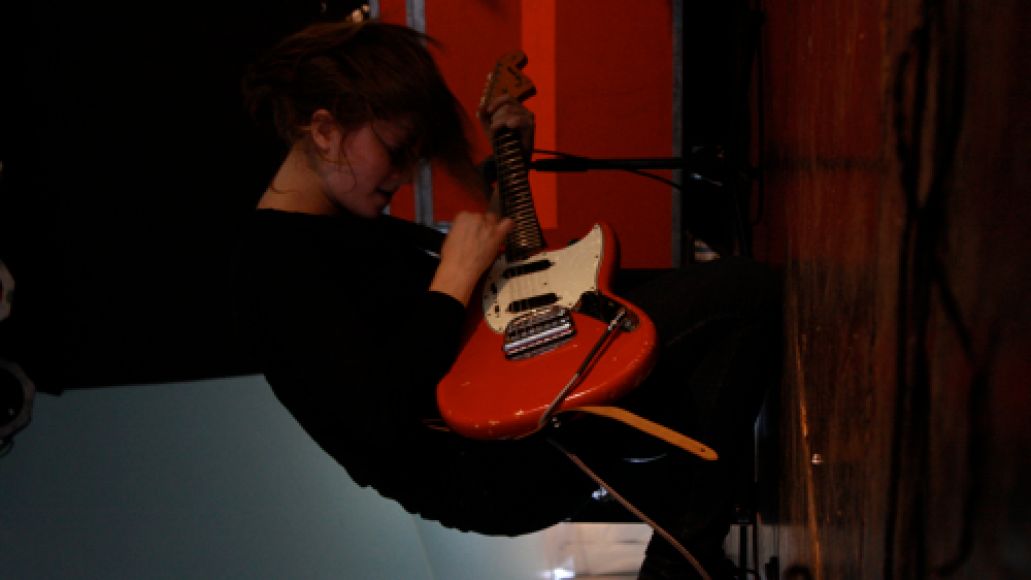 One of several logistical problems at SoundTown was that the Metromix and Summit stages were far too close together. In order for a musician on one stage to be heard, the artist on the other stage had to end their set early. After Parr finished, everyone headed over to see Zoo Animal. Terse, irreverent singer and guitarist Holly Newson introduced the band with “We’re getting a little antsy, so we’re going to start with new material,” which they did for the majority of their short set. The band eschews religious labels even though Newsom writes many, if not all, her songs about her relationship with God. As always, Newsom transfixed with her stage fervor, thrashing and tossing her hair, and abruptly ran offstage after their last song. 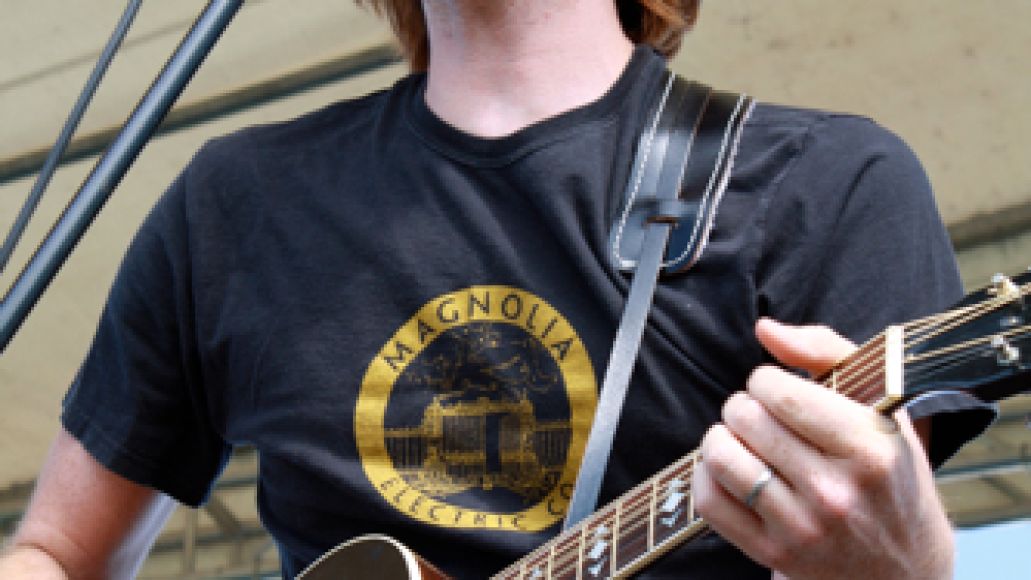 Once the thunderous applause for Zoo Animal died down, everyone trooped back over to the Metromix Stage to see six-piece Americana band Farewell Milwaukee (a seemingly popular local band name, with others like Farewell Continental and the Farewell Circuit). Their brand of country light, with low harmonies and plenty of acoustic guitar, didn’t particularly stand out from the other local acts; nonetheless, they played skillfully and the band’s set was perfect for a sunny afternoon on the grass before the rest of the action-packed day took off. 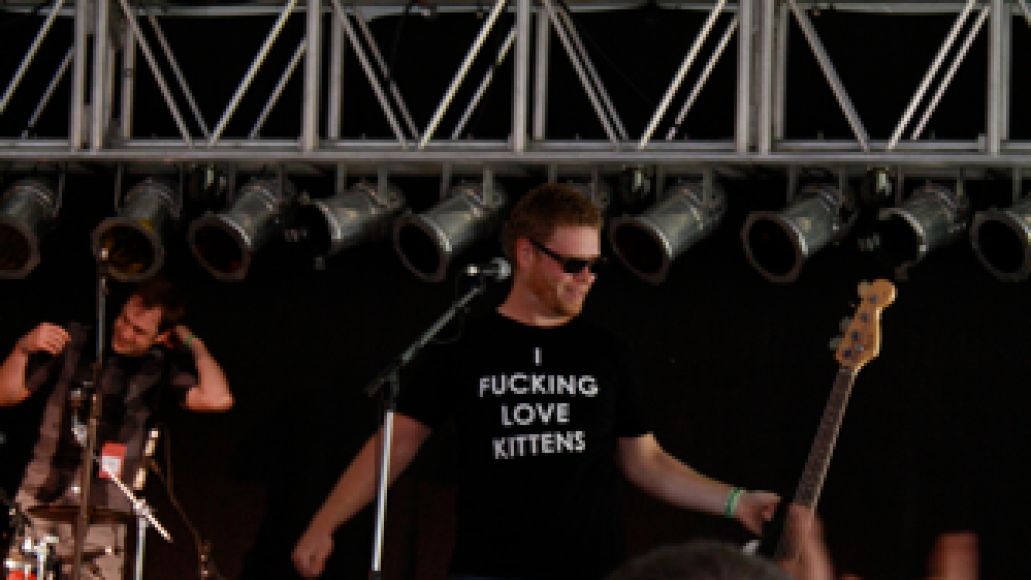 When I noticed that guy wearing the “I Fucking Love Kittens” t-shirt, I should have known he would be the frontman of ’80s hair metal dance band Apollo Cobra. Their outlandishly sexy set—which definitely sampled some riffs from “Heart of Glass”—sounded slightly out of place with the sun still up, but it entertained with funky bass lines and lyrics like “dance like a motherfucker.” And as the bassist sings, if “there’s a beat I like and a girl I like, let’s dance to this!” So I did. 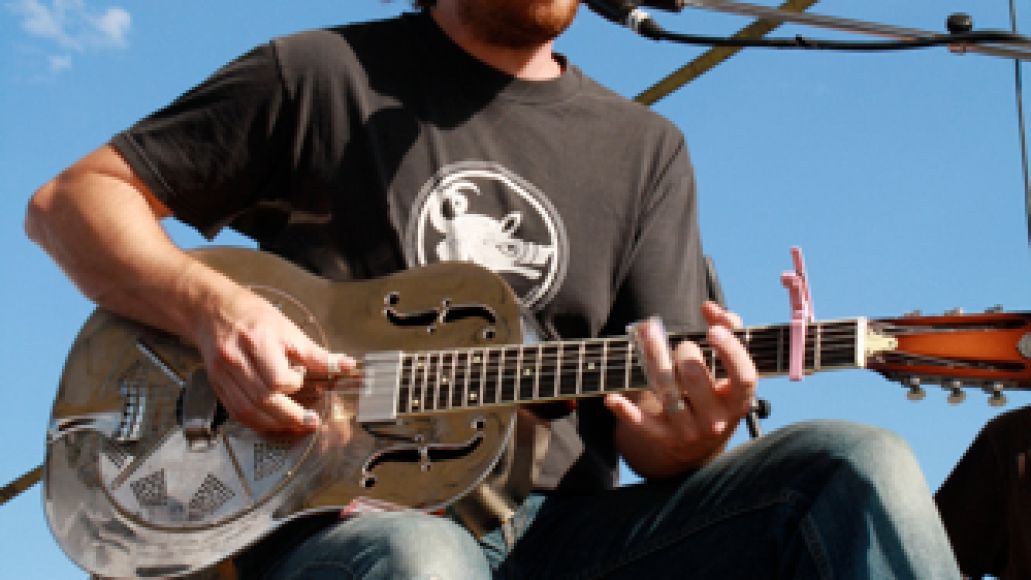 “I know these assholes, and they’re really good.” That’s how Minneapolis folk/blues/country band Jeff Ray and the Stakes were introduced. With a harmonica, an acoustic steel slide guitar, what looked like a bongo, not to mention more traditional guitar and bass, they were truly “really good.” If there’s one thing Minnesota does well—some might say surprisingly well—it’s old-school blues. Unfortunately, I saw hardly any of their set because I wanted to make it over to Cory Chisel on the Main Stage. 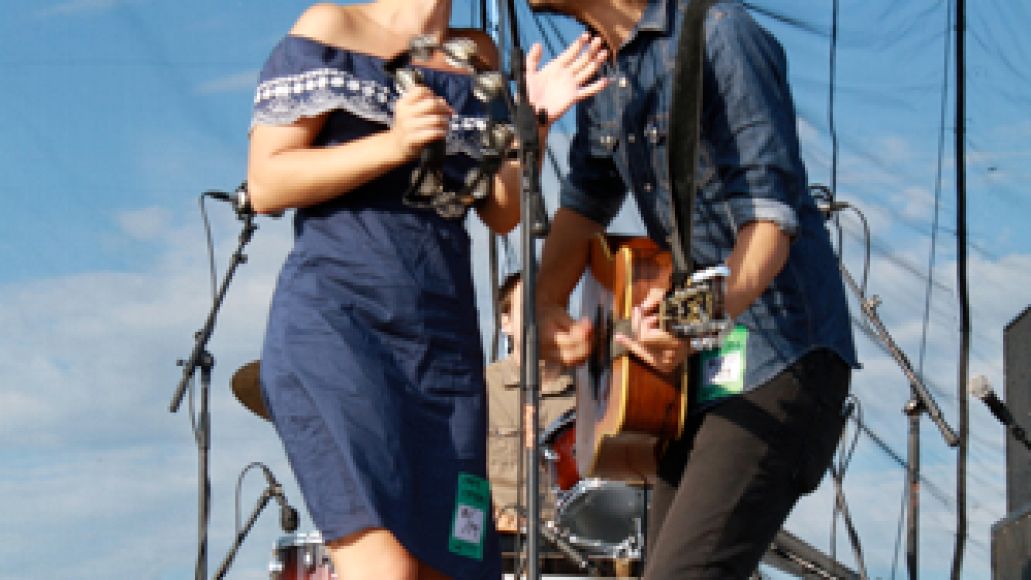 I didn’t have high hopes for alt-country golden boy Cory Chisel after seeing his latest album, Death Won’t Send a Letter, in the discard bin at my radio station. But the native Wisconsinite, who cited Charlie Parr as an influence and grew up in North Minneapolis, charmed me. The stage’s security guard must have felt the same, because he brought Chisel a beer during new song “Guiding Star”. Even before Chisel dedicated the song to the burly, trucker-moustachioed man, his husky voice and the Wandering Sons’ dexterous playing would have been enough (for the many vocal female fans surrounding me, it was). The five-piece sounded much more soulful live than recorded, especially their song “Born Again”. The audience persuaded Chisel to perform the acoustic, gospel-like “These Four Walls”, a pitch-perfect end to SoundTown’s first main act. 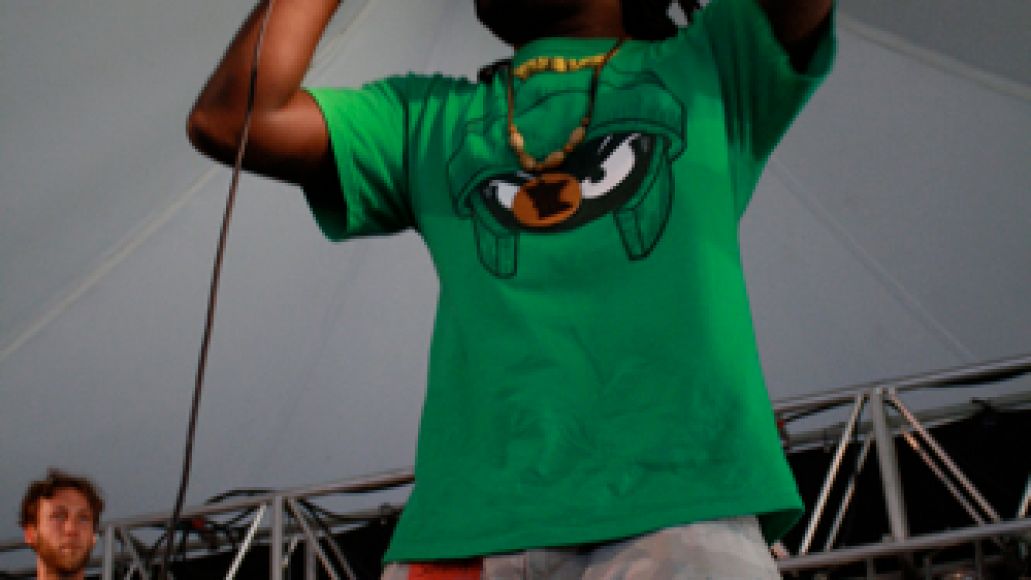 More Than Lights is another band I initially had (still do, really) a difficult time getting my ears around, even though their orchestral, spoken-word hip-hop is beloved in the Twin Cities. On their first song, the band sang, not sampled, the choruses of Sublime’s “What I Got” and “Best of My Love” by The Emotions. Though they were sung with heart, I didn’t buy it. Local guest vocalist Alicia Steele stole the show with her throaty warbling and sassy dance moves. While other Summit and Metromix artists curtailed their sets to give their neighboring stage a chance to be heard, More Than Lights played until the end, which meant I had to miss local folk collective Roe Family Singers to catch Delta Spirit. 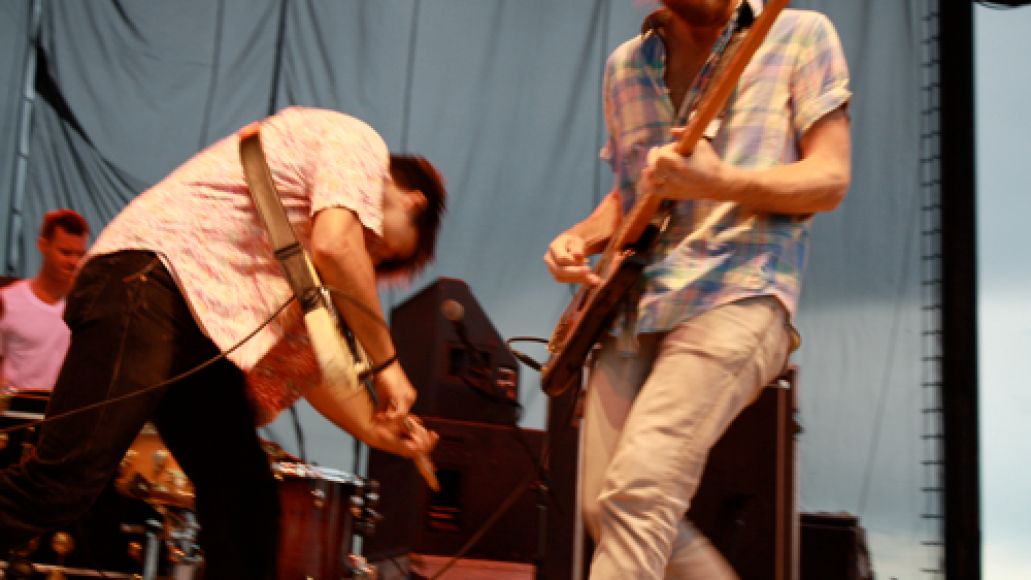 “Yeah! Somerset, Wisconsin!” Matt Vasquez yelled as he took the stage, good-naturedly mocking the sparse but enthusiastic audience. Without much further ado, Delta Spirit ripped through “Bushwick Blues” before Vasquez continued, “To be honest with you, I smoked pot today! It was great! God bless America!” The caliber of the performance and the band’s onstage banter reminded me why I’ve been wanting to see them for so long. Delta Spirit played a tight, raucous set, screaming and shredding like there was no tomorrow. Vasquez threw his guitar into the air after “Ransom Man”, letting it hit the stage on the third time; and guitarist Will (I know that because Vasquez coerced, and tuned, the audience into singing “Happy Birthday” to him) played a tambourine attached to a trash can lid for “Trashcan”. Delta Spirit played a new song, “Tear It Up”, and encored by covering country standard “Doin’ My Time” after singing the opening “Na, na na na na” salvo to classic football fight songs. 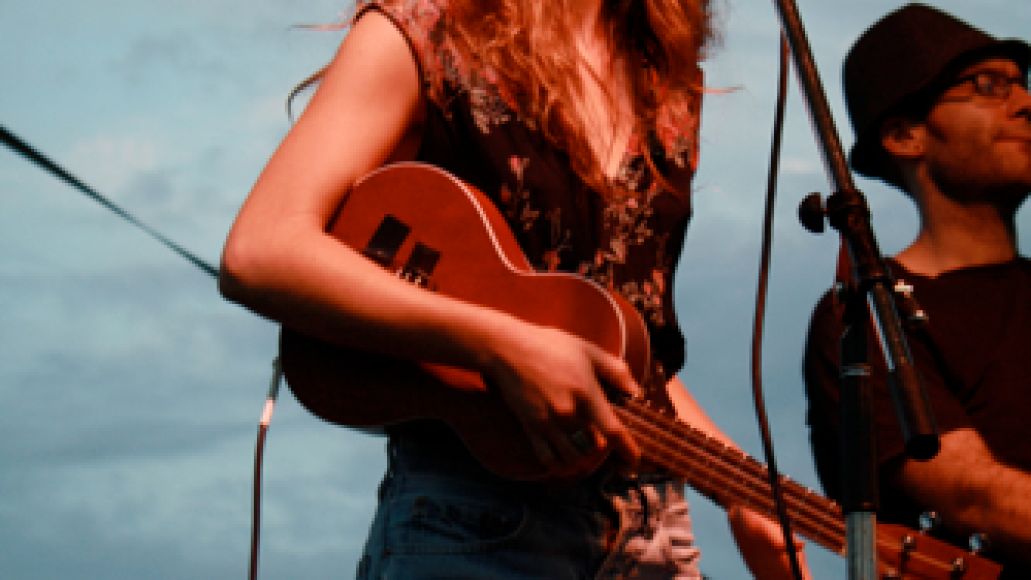 I only caught a hot minute of Jack Klatt and the Cat Swingers’ set before leaving to see Sims at the adjacent Summit Stage (which turned out to be moot, because he was 20 minutes late. I’m guessing it’s because he wanted to give the Cat Swingers a chance to be heard.) The local, mostly ragtime, occasionally baroque blues-folk group incorporate a washboard and ukelele for an old-timey listening experience. 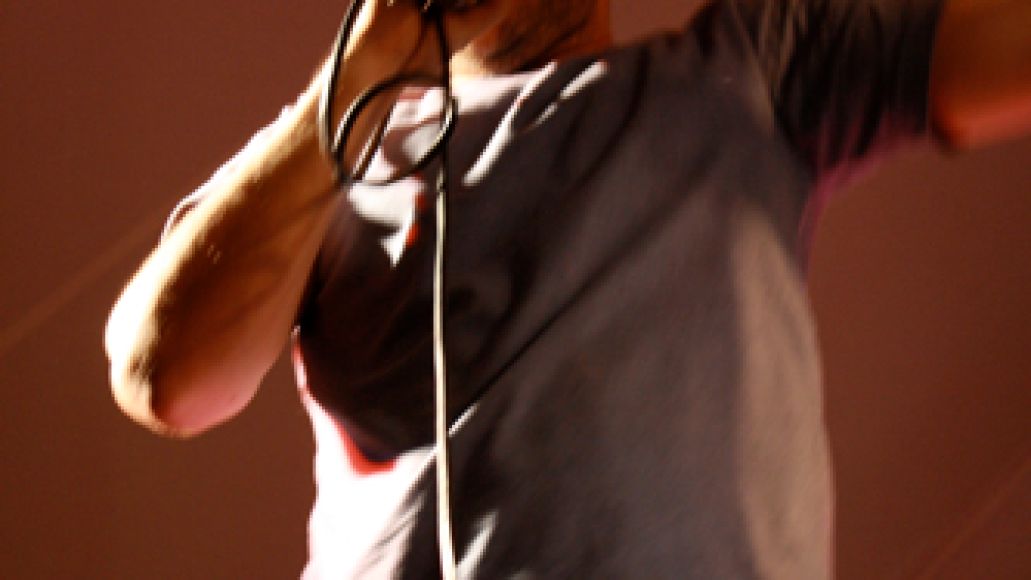 I was looking forward to seeing Minneapolis hip-hop collective Doomtree member Andrew Sims, aka Sims, as a solo act, since he released his latest record, Bad Time Zoo, to critical acclaim this past spring. Usually, he performs with the rest of the Doomtree crew, but this SoundTown performance served as a preview for his Good Time Zoo tour later this fall. With DJ and beatmaker Lazerbeak as his accompaniment, Sims started his set seemingly nervous, taking a while getting started and showing off his “dance moves.” He gained momentum as the set continued, playing newer songs “Bad Time Zoo” and “The Veldt” interspersed with older material. Unsurprisingly, the politically-minded rapper took a dig at Michele Bachmann, earning a unanimous roar of approval from the audience. 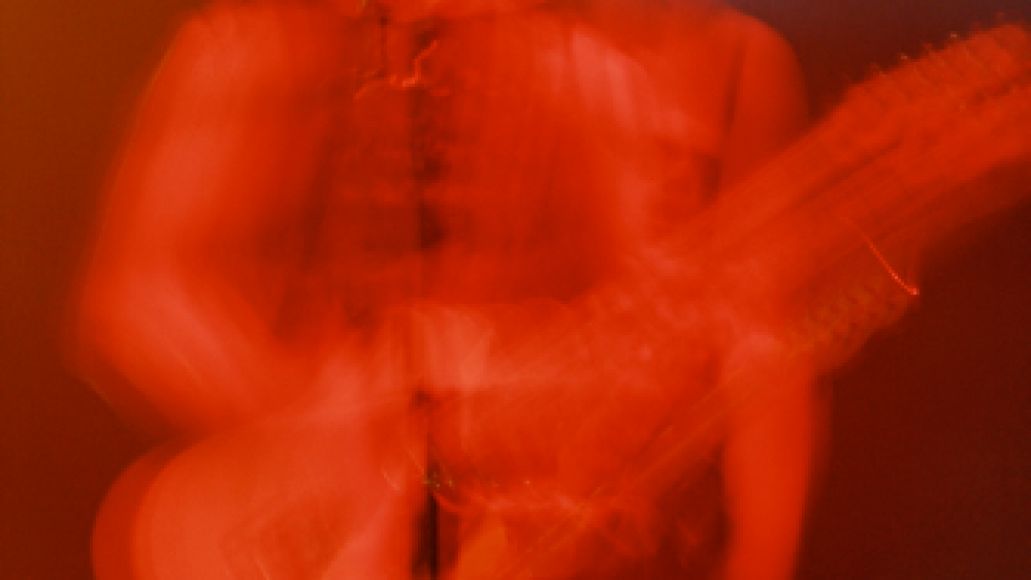 Ghostland Observatory was pretty much everything I thought it would be: earth-quaking bass and the best laser show I’ve ever seen (well, except for The Flaming Lips’ light show extravaganza, but we’ll get to that tomorrow). All their songs blended together into one long DJ set by Thomas Ross Turner, who donned a Count Dracula-like Chilean flag as a cape; but you could discern songs like “No Place for Me”, “Miracles”, and “Codename Rondo”. The lasers really peaked on the last song, starting and stopping, trance-like, with the spoken melody and the chorus’s repeated command to “listen.” Subtleties like the softer, funky ‘80s synth lines and Aaron Behrens’ vibrating falsetto were lost in migraine and/or seizure-inducing sonic and visual effects. Physically and mentally, I was forced to take a break before their set ended. 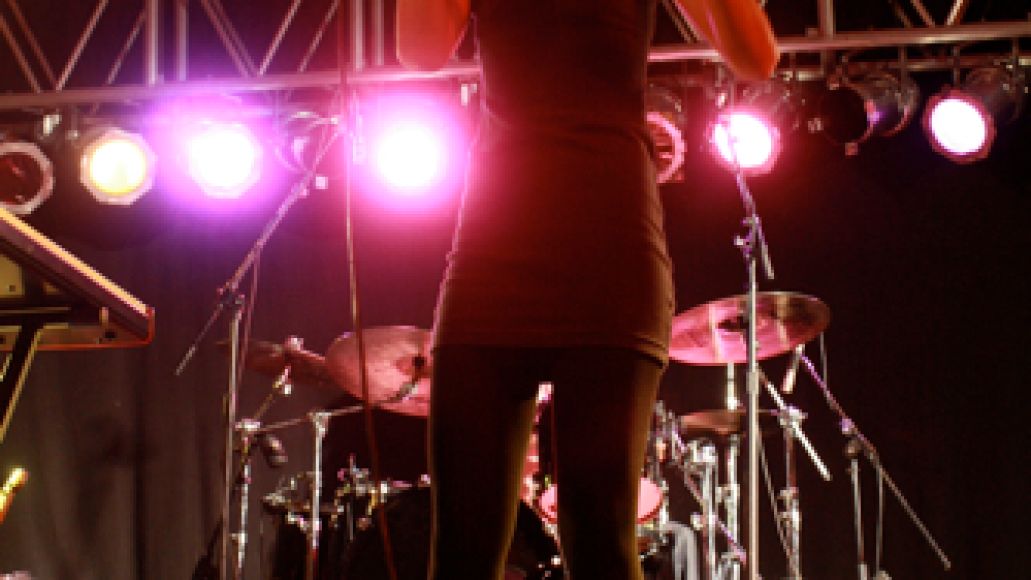 Right before local darlings Roma di Luna took the stage, I found out that this show would be the group’s last performance. As soon as lead vocalist Channy Casselle took the stage without her husband, Alex, with whom she fronted the band, it slowly dawned on me why they were breaking up. Roma di Luna was understandably melancholy, eschewing their new, more upbeat material for old songs like “Plenty” off their debut, Find Your Way Home. Even though they are disbanding, Roma di Luna did debut a new song they’re “working on” called “Too Real”. Before the New Pornographers’ opening song drowned out Roma di Luna—I felt slightly guilty leaving for the Main Stage after Casselle said, “Now you won’t be able to hear us anymore”—her arrestingly creamy, round voice reminded rapt Minneapolitans how much we’ll miss her. That is, until we hear her recently announced new project, Polica.

A.C. Newman’s curmudgeonly stage banter and a noticeably absent Neko Case detracted from the New Pornographers’ usually effervescent pop. Don’t get me wrong. Songs like “The Laws Have Changed” and “Your Hands Together” still put a grin on my face (including Case substitute Kathryn Calder’s whistling, which I later realized may have been lip-synching), and the songs still sounded practically giddy live. It just felt like the New Pornographers were simply going through the motions. Granted, it’s not like the audience made things easy. After being pelted with glow sticks, Newman asked the audience how much they cost and said, “Let’s consume. Consume and prosper!” And then he brought up Minnesota versus Wisconsin, which I’m willing to bet contributed to the early mass exodus. Too bad everyone missed “The Bleeding Heart Show”, a highlight not even wayward glow sticks or age-old rivalries could diminish.

Festival Review: CoS at SoundTown 2011