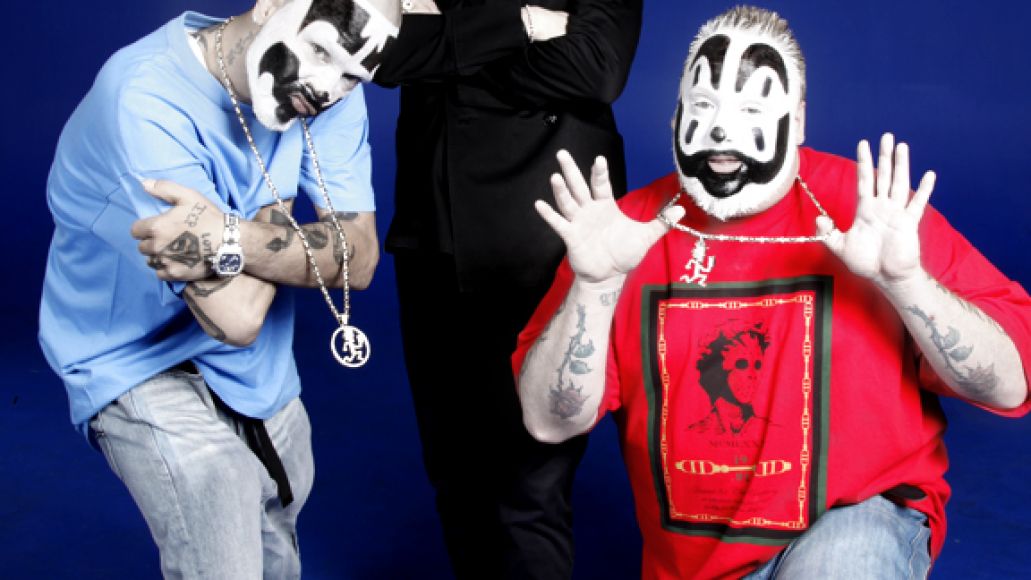 A couple years back, our own David Buchanan wrote about Insane Clown Posse (ICP), to which several – if not hundreds – of you expressed your deep hatred at the group, and how disgusted you were with the coverage. Suffice it to say, Mr. Jack White of Third Man Records was not one of those people. In a release that’s likely to make heads spin (literally, metaphorically, what have you), White has produced a track that not only features ICP, but also, and get this, Wolfgang Amadeus Mozart.

We’ll let the press release explain that one:

Back in ’82, ahem, 1782, Wolfgang Amadeus Mozart wrote a piece that’s been left out of the spotlight ever since. The title of the piece is “Leck Mich Im Arsch” or literally translated to English as “Lick me in the arse.” Understandably this piece has figuratively been swept under the rug. So who better to give this piece it’s due respect than the wildly successful, much misunderstood, and divisive Southwest Detroit rappers Insane Clown Posse?

To bring the track up-to-date, White tagged Nashville rock band JEFF the Brotherhood, who dusted off Mozart’s classic melody (complete with operatic German vocals), all for ICP’s taking. Basically, just get ready for your head to melt.

But, why stop there? In addition to “Leck Mich Im Arsch”, there will also be a B-side titled “Mountain Girls”, which “finds Violent J and Shaggy 2 Dope telling tall tales about a shotgun wedding, meth problems and moonshine…all pretty common-fare for a twangy country song birthed in Nashville.” So, how do you hear this madness?

The Mozart medley is streaming below now, but to hear the other song, you’ll have to wait until September 13th, when the entire single will be available as an iTunes digital download. However, in typical Third Man fashion, it’ll also be available as a 7” single, though limited to one hundred tri-color copies, available only at the Third Man Rolling Record Store at the MI Fest in Brooklyn, MI which goes down September 17th. Another 50 copies will be randomly inserted into mail orders via Third Man Records. Yeah, good luck.

Mark your calendars, folks. The world officially ends today. Not with a whimper, nor a bang, but with facepaint and some maniacal laughter. Kudos.

And here’s the amazing teaser trailer: