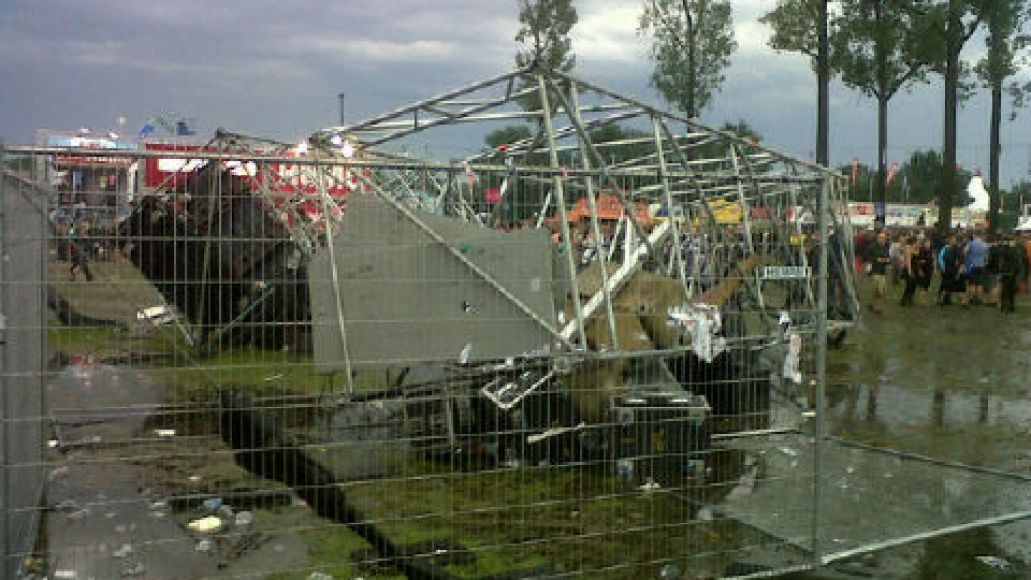 Update: Pukkelpop 2011 has been canceled.

A strong storm that swept through the grounds of the Pukkelpop festival in Hasselt, Belgium has killed four and injured 75. According to Billboard, the storm uprooting trees and caused festival tents to collapse. The festival’s Chateau stage was destroyed, while the Shelter stage was damaged.

Chicago-based indie-rock band Smith Westerns was playing on The Chateau stage at the time of its collapse. Frontman Cullen Omori has since issued the following statement:

We had just finished the first song of our set at Pukkelpop when the stage/tent started shaking and simply thought it was a storm passing through. I made a comment about Cheap Trick and we were about to play the next one when our tour manager yelled at me to run off the stage. Right  then the tress collapsed 1 foot in front of Max. At this point we thought only the stage broke, not the tent.  Amid the chaos it was hard to tell exactly what had happened, but after the rescue teams started coming in it became clear that there were severe injuries and we are now being told there are reports of multiple deaths. Our thoughts and prayers go out to the families who lost loved ones in today’s tragedy.

Below is video from Pukkelpop of a stage being battered by the storm. You can find a Belgian media report with more footage here.