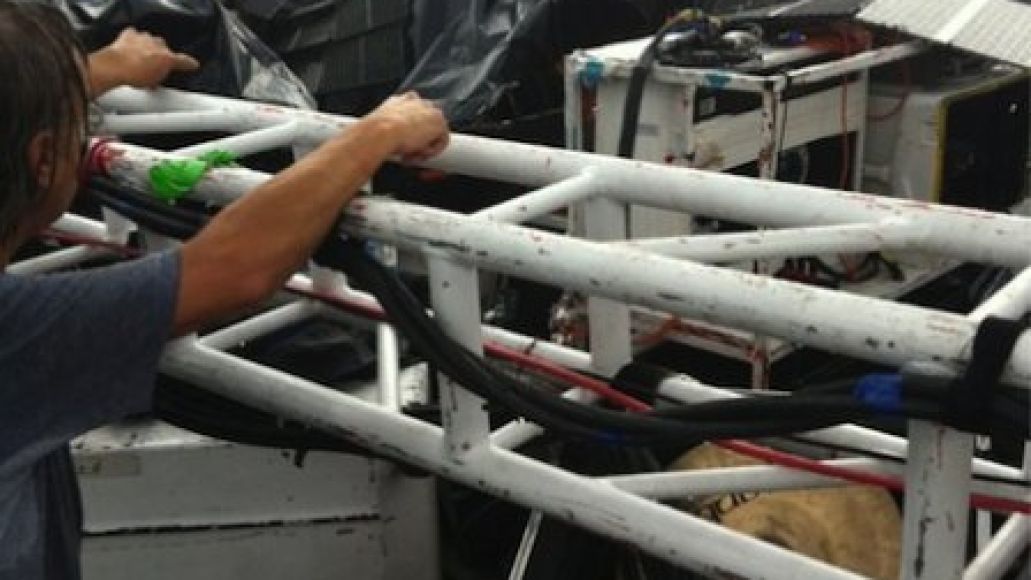 A few weeks after the stage at the Ottawa Bluesfest collapsed, a similar random act of nature struck The Flaming Lips’ August 7th set at Tulsa, OK’s Brady District Block Party. Prior to their show, wind and rain struck downtown Tulsa, collapsing the lighting rig and destroying or damaging some $800,000 worth of the Lips’ equipment (via Pitchfork).

According to reports from NewsOK.com, the stage was evacuated immediately before the collapse of the lighting rig, thus preventing any injuries to fans, band members, or road crew. After the incident, frontman Wayne Coyne frantically began to salvage as much equipment as possible, saying at the time, “The Oklahoma wind and rain was a little bit more unpredictable than we had hoped, and we had a bad gust. The whole thing is shambolic and a bit dangerous and we’re working to get as much off of the stage before we get hit with the second wave.”

Above, take a look at a shot of the stage Coyne posted on Twitter, and check out footage of the collapse in fan-shot video below. Organizers of the Brady District Block Party are working to reschedule the Lips’ show, with updates to be available here within the next two weeks. No word yet on how this will impact other upcoming Lips shows, so stay tuned to CoS for any updates as they’re announced.

Stage collapses prior to Flaming Lips show in Tulsa, OK