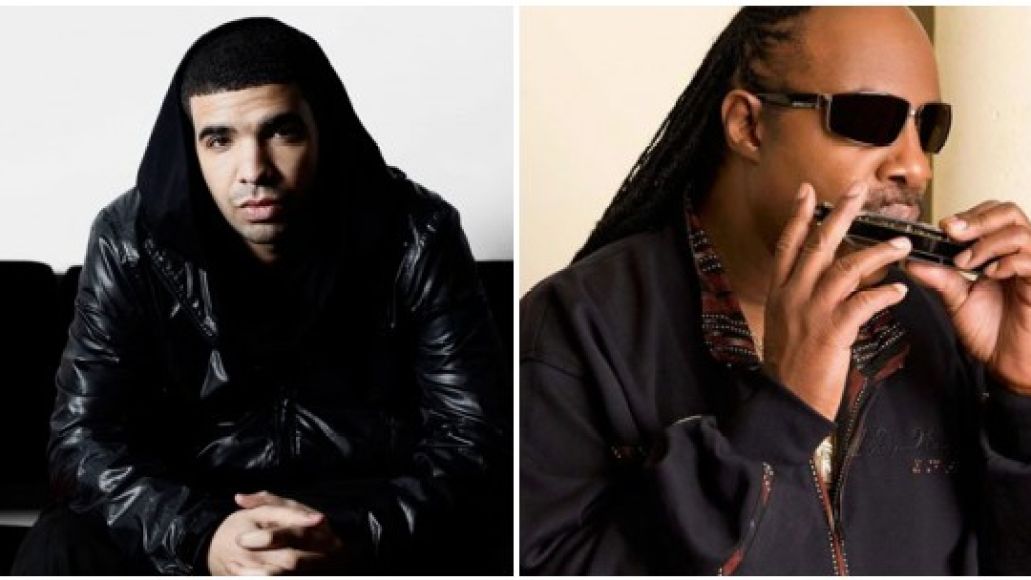 For a second night in a row, Drake made headlines (sorry, Confucius_says.) Fresh off the release of his new single, the rapper confirmed to MuchMusic.com that the legendary Stevie Wonder would be appearing on his forthcoming studio album Take Care.

“[Stevie Wonder] helped me out with a lot of the music, just came and sat with me, listened to my music, told me where I could add a couple things to make it more sonically appealing, and not only that but we actually are writing together, which is an incredible experience,” Drake told MuchMusic. He then added that Wonder was originally supposed to collaborate on two songs, but ended up doing six.

Last night at Drake’s OVO Festival in Toroto, the duo offered a taste of what’s to come when Wonder appeared at a surprise guest during the rapper’s set. According to the Toronto Sun, Drake and Wonder played a half-dozen or so of the latter’s hits, including “Sir Duke”, “I Wish”, “My Cheri Amour”, “Ribbons In The Sky”, “Signed, Sealed, Delivered”, and “Superstitious”. Check out some highlights in the video montage below; the festival also featured Drake and The Weeknd, along with special guests Lil Wayne and Nas.

Take Care is due for release on October 24th via Young Money Entertainment/Cash Money Records.

In case you missed it, here’s a stream of Drake’s new single, “Headlines”: