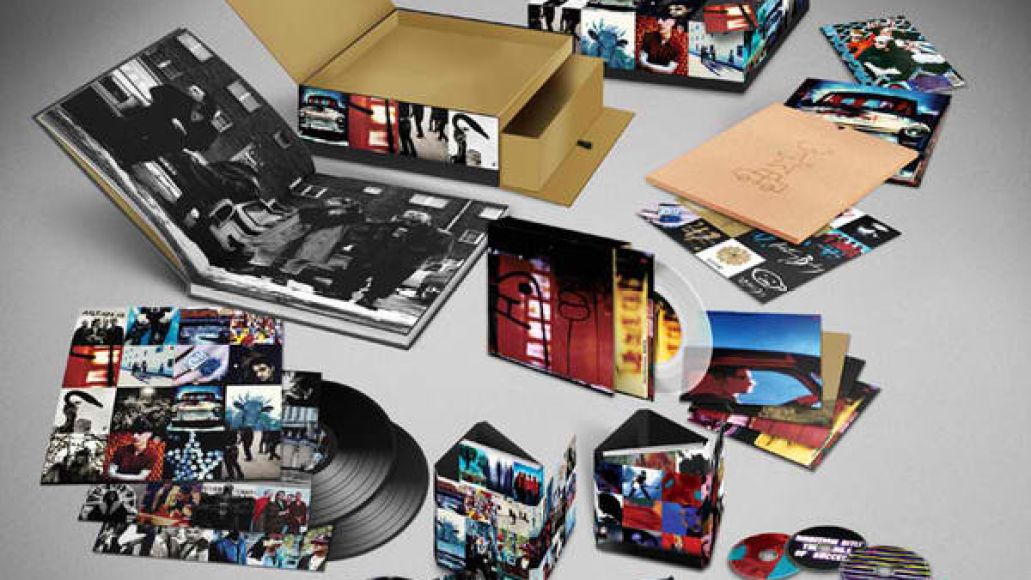 With $736 million in their pockets, U2 are now setting their sights on the 20th anniversary reissue of their album Achtung Baby. First announced earlier this year, 20 Years of Achtung Baby will be released on October 31st in five different configurations, including an Uber Deluxe Edition that supplies you with a pair of Bono’s’ sun glasses. Imagine wearing them while using your new tuning forks!

Along with the shades, the Uber Deluxe Edition is also comprised of six CDs including the original Achtung Baby album, the follow-up album, Zooropa, B-sides and re-workings of previously unheard material recorded during the Achtung Baby sessions. There’s also four DVDs featuring a new documentary called From The Sky Down, the concert film Zoo TV:Live From Sydney, all the videos from Achtung Baby plus bonus material. And since this thing will cost you £385.99 (or, $630), you’ll also get five clear 7″ vinyl singles in their original sleeves, 16 art prints taken from the original album sleeve, an 84-page hardback book, a copy of Propaganda magazine, four badges, and a sticker sheet. All of it will come packaged in a magnetic puzzle tiled box. There’s a picture of it all posted above.

The other three configurations include a vinyl box set containing four LPs, two of which are pressed on translucent blue vinyl containing remixes and B-side; a Deluxe Edition containing the reissue of the original album plus B-sides and rarities; and your standard single-disc reissue.

Pre-orders are now ongoing via Amazon.co.uk through the band’s website.