“So, welcome to Pearl Jam 20, Queens of the Stone Age 14, The Strokes 12, Liam Finn 14, Mudhoney 23, and John Doe 34,” a breathless, sweat-soaked Eddie Vedder regaled late Saturday night. Under a thick mop of hair, the acclaimed Pearl Jam frontman smiled humbly, staring at his thousands of die-hard fans, as he clenched his bottle of wine in celebration. From floating atop a surfboard in the Pacific Ocean to rolling through 30+ songs at Alpine Valley in East Troy, WI, Vedder has lived an envious dream – one that he’s not even sure is real. “It’s hard to imagine. It’s really against the odds.”

This year – in addition to Lollapalooza and Nirvana’s Nevermind – Pearl Jam turns 20. For some, that’s a sort of revelation. For others, like the Seattle quintet’s “battle worn” soldiers, who have scars and stories for each year since… well, not so much. Regardless, everyone arrived Saturday morning at a very muddy Alpine Valley to help Vedder, Mike McCready, Stone Gossard, Jeff Ament, and Matt Cameron blow out the proverbial candles. Rain or shine, these past, present, and future Ten Club members reveled in the festival’s nostalgia-ridden confines, which even included a Pearl Jam Museum showcasing various artifacts (e.g. gig posters, music video props, original artwork, etc.) from yesteryear.

Nobody heeded Jeremy Piven’s 1994 advice (“What’s this? You’re wearing the shirt of the band you’re going to see? Don’t be that guy.”) and instead were “that guy” and more. Grouped together, you would be hard-pressed to find a tour shirt that wasn’t present. But that only added to the fun. As hours passed, so did stories and anecdotes from countless fans, who shared everything from homemade t-shirts to unique tattoos to tales of near-folklore. Cameron Crowe can gather hours upon hours of footage from the band’s vault – which he has for the forthcoming documentary, Pearl Jam Twenty – but he’ll never be able to touch upon this unique (and incredibly telling) facet of the band’s history. 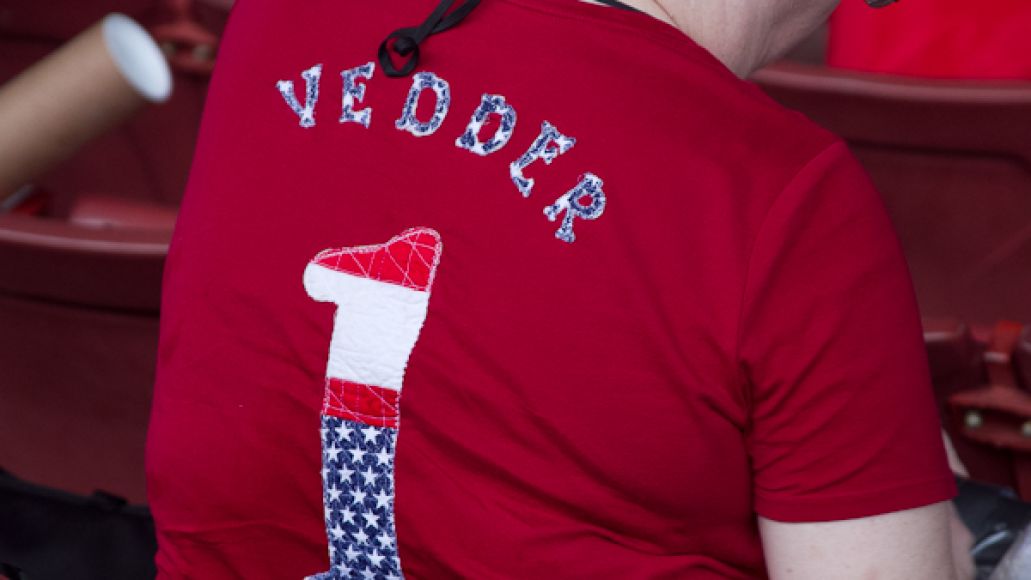 But it wasn’t just one big fanapalooza. This was a festival, after all. Each day’s activities began with promising sets by newcomers like Star Anna and The Young Evils and continued on with familiar faces Glen Hansard, Liam Finn, and Dhani Harrison’s thenewno2. These performances took place nearby on two alternate stages. They didn’t offer up anything unusual, or attract too much activity, though on Saturday, as gray skies and relentless rain made everything rather grungy (how fitting, right?), Hansard strummed out a fitting rendition of Hal David and Burt Bacharach’s ”Raindrops Keep Fallin’ on My Head”. Many poncho-wearing spectators joined along for that one. 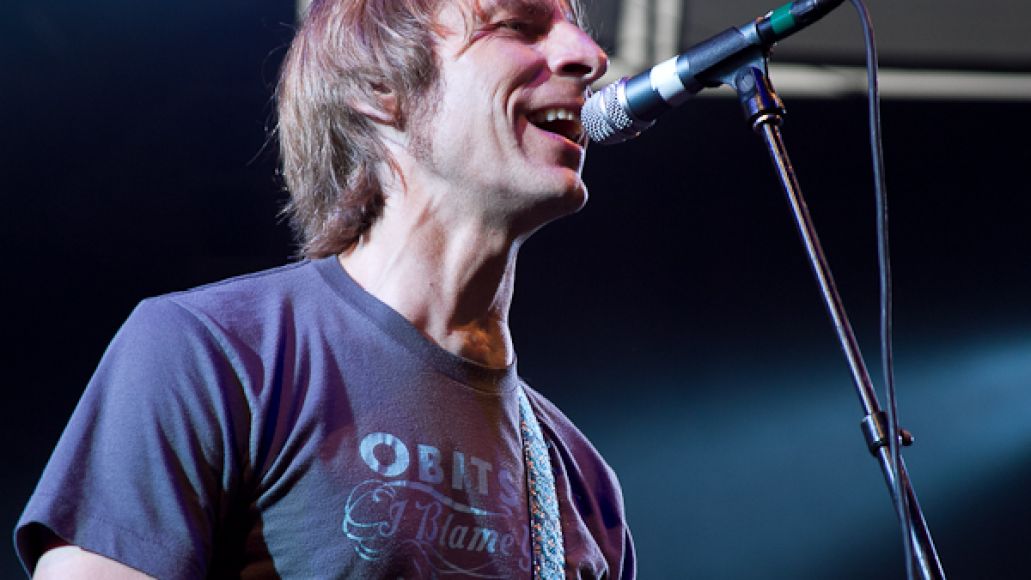 Admittedly, the real festivities started each day around six o’clock on the main stage. Mudhoney unlocked each evening with 45 minutes of straight up fuzz rock, spiraling through oldies like “You Got It”, “Suck You Dry”, and naturally, “Touch Me I’m Sick”. (No, Citizen Dick did not reunite.) Queens of the Stone Age and The Strokes made the best of their respective 45 minutes, too. “If we do this right, I know we can all get laid tonight,” Josh Homme exclaimed before diving deep into his catalogue. He dished out oldies like “I Think I Lost My Heachache” and “Mexicola”, a song despised by Pearl Jam’s Stone Gossard, who put out the group’s 1998 debut, as Homme explained. As for Julian Casablancas & Co., the boys appeared visibly excited. The only Strokes member with a voice, Casablancas admitted his love for Pearl Jam, stating that Vedder’s “got the best voice ever.” He attempted to prove that statement twice when the straggly frontman performed “Juicebox” with the band each set. 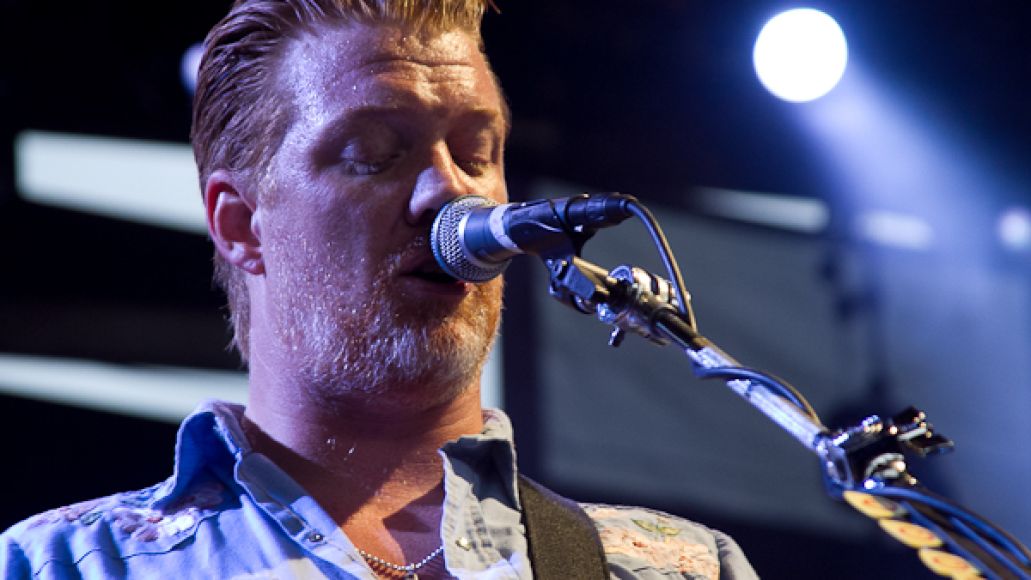 These little cameos were highly enjoyable – especially on the second night. In addition to a varied setlist, each band – Queens of the Stone and The Strokes, specifically – turned heads with their onstage collaborations. Casablancas guested on “Sick Sick Sick”, and Homme returned the favor on “New York City Cops”. Vedder decided to also pop out with Queens, adding the now iconic cowbell fills to “Little Sister” and spitting out some flavor on “Make It Wit Chu”. These moments kept everyone on their feet and staved off any mixed feelings of experiencing the same lineup twice. 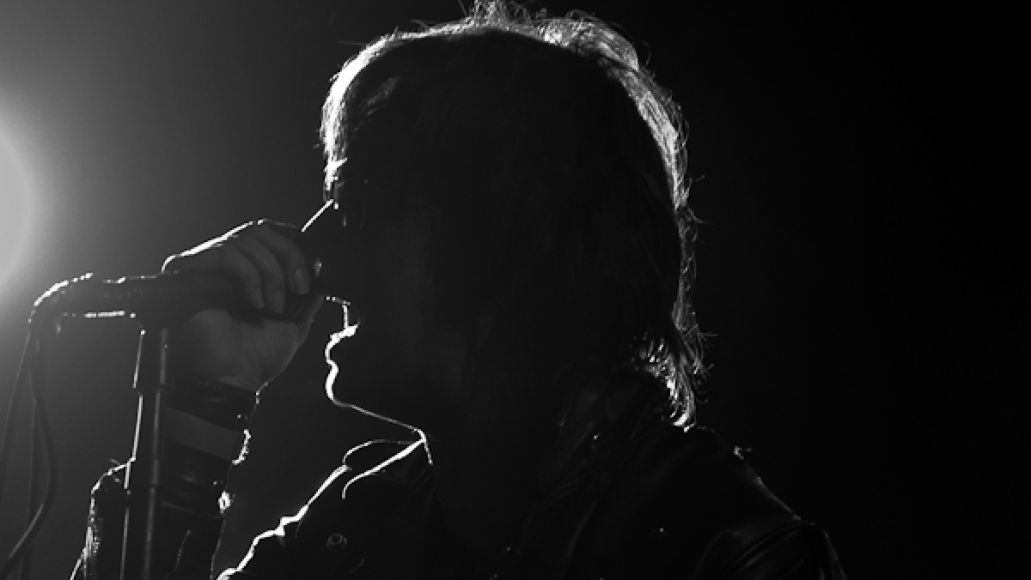 Then came the main event each night. To no one’s surprise, Pearl Jam delivered two incredibly unpredictable sets over the weekend. Saturday’s set proved most valuable, however. Lacking many of the band’s hits, which would arrive Sunday instead, the band opted for a rarities-filled gig, dusting off relics like Binaural outtakes “Education” and “In the Moonlight” (which featured Homme, no less), Into the Wild track “Setting Forth”, Riot Act‘s “Help Help”, and Yield‘s hardly performed “Push Me, Pull Me”. It was uncanny seeing thousands of fans singing along to these unlikely tracks. That explains why nobody complained when nary a hit from Ten was performed – well, save for “Once” and “Porch”. That being said, no one griped when “Better Man” or “Do the Evolution” rolled on by, either. 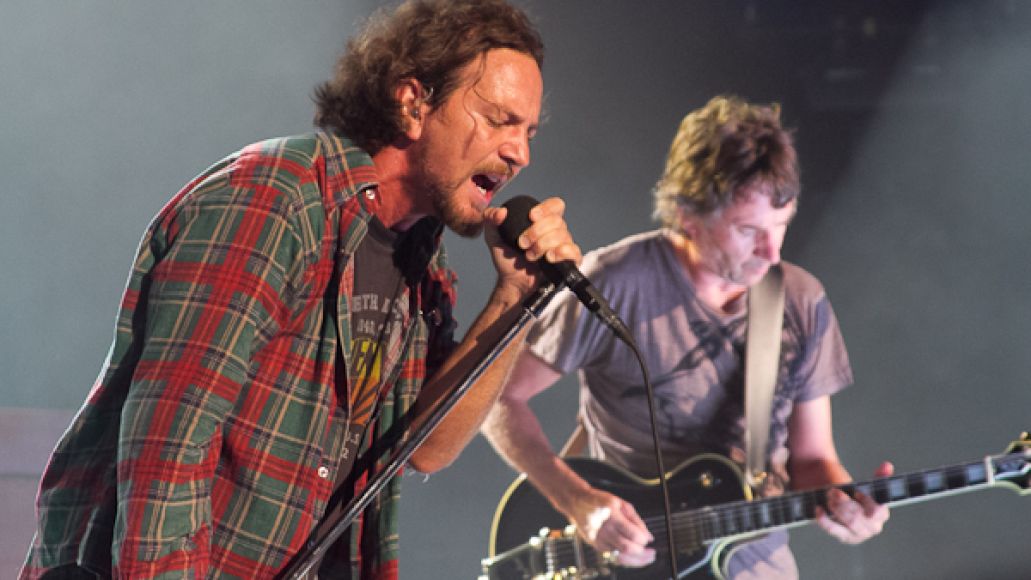 They also didn’t mind the eye-popping reunion of Temple of the Dog. Throughout the day, fans could be heard everywhere, whispering and chatting about the likelihood of Chris Cornell’s appearance. Given Cornell’s mischievous Friday tweet (“Just landed in Chicago. Now what?”) and that the first set of the weekend featured collaborations with everyone from Liam Finn to Dhani Harrison to Casablancas (who showed up mid-song to sing “Not For You”), it was sort of a given that Cornell would be there. Still, that didn’t stop the thousands of fans from tearing apart their seats (and nearby fans and newfound friends) in utter shock when Cornell strolled on out late Saturday night. Truth: a few even cried. Pretty hard not to, especially when Cornell led a tribute to the late Andrew Wood by performing Mother Love Bone’s “Stardog Champion” in addition to Temple hit “Say Hello 2 Heaven”. The dreamy, slightly surreal set continued with more Temple tracks, including the Soundgarden-esque “Reach Down”  and the ’90s rock radio duet “Hunger Strike”, which saw Vedder take center stage with Cornell – finally. This would happen again Sunday, only this time fans received other Temple favorites “Call Me a Dog” and “All Night Thing”. Unreal. 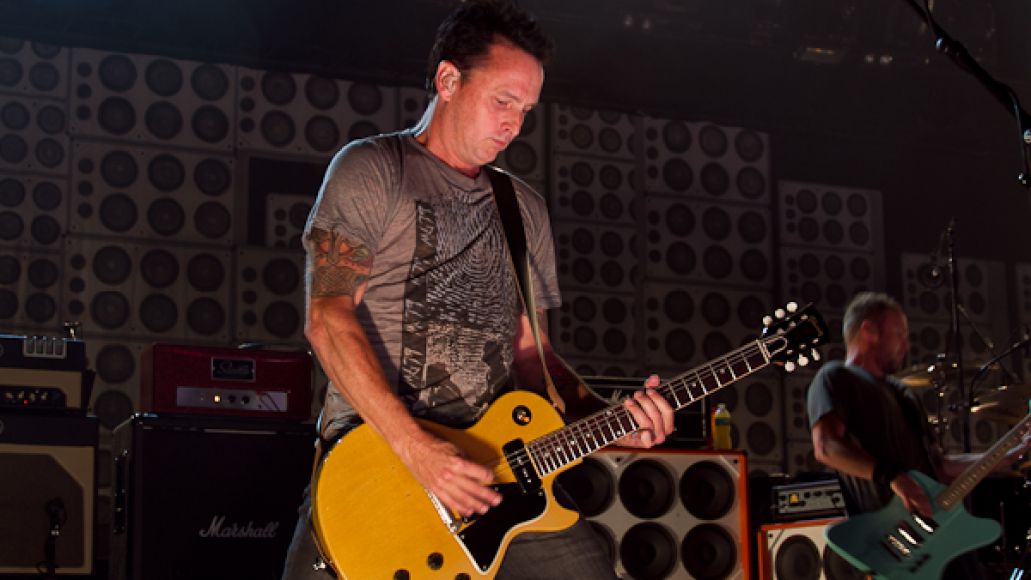 That’s why on Sunday, when rumors of Neil Young surfaced, some fans took it as truth. Can’t blame them. If there was a Temple set, then why not a short Mirrorball gig? What other place would be fitting for a reunion of the 1995 collaboration? Unfortunately, it never happened, though the band did kick out a cover of “Rockin’ in the Free World”, paying homage to the unofficial grandfather of grunge. It wasn’t the only cover of the weekend, either. Pearl Jam rolled out quite a few of these, honoring their past mentors – and yes, they’re scholars of many. On Saturday, they kicked things off early with Joe Strummer’s “Arms Aloft”, blistered the night skies with their 2007 take on The Who’s “Love, Reign O’er Me”, and ignited a punk rock fiesta with Mudhoney by swinging through MC5’s “Kick Out the Jams”. In hindsight, these sort of grounded a band that’s certainly become their own by now. They also just made for a better party. 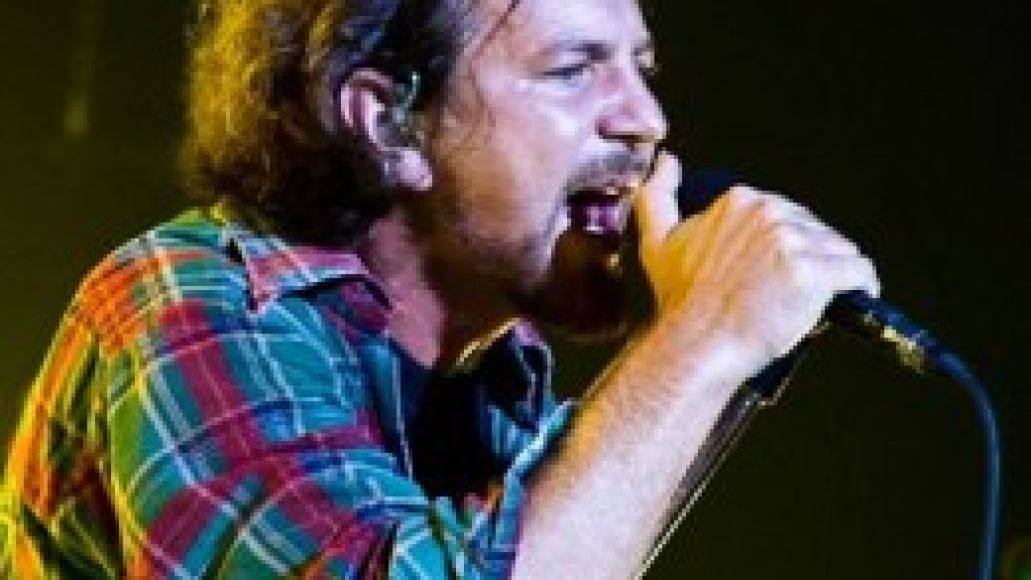 And that’s all Pearl Jam’s “Destination Weekend” was in a nutshell. But, given the band’s legacy to date, that’s pretty integral. Over 20 years, they’ve solidified themselves as a pertinent key figure in the touring industry, and no documentary, book, or album would ever suffice. That’s why the band’s six hours onstage this past weekend proved necessary. This was the essential commemoration. On stage… and with the thousands that put them there.

It was a unique experience, and although Alpine is essentially a large valley with a stage, it felt oddly intimate. Vedder recognized this, opening up mid-set with one little reflection about how putting your life into a band is a risky endeavor, one that in all likelihood doesn’t ever work out. But, for him, and for Pearl Jam, it did. It has worked wonders. Knowing this, Vedder thanked everyone again and again and again, but he also patted himself on the back, adding, “I want to thank that kid from back then for never giving up.” Heartfelt and poignant, the moment felt as organic as the band has all this time. And based on the rapturous applause that followed, rattling the beautiful wooden amphitheater for minutes on end, the band should be feeling the same way in 20 more years. We’ll see come 2031.

Photography by Jeremy D. Larson. For complete video coverage, check out our highlights from day one and day two.

Festival Review: CoS at Pearl Jam 20