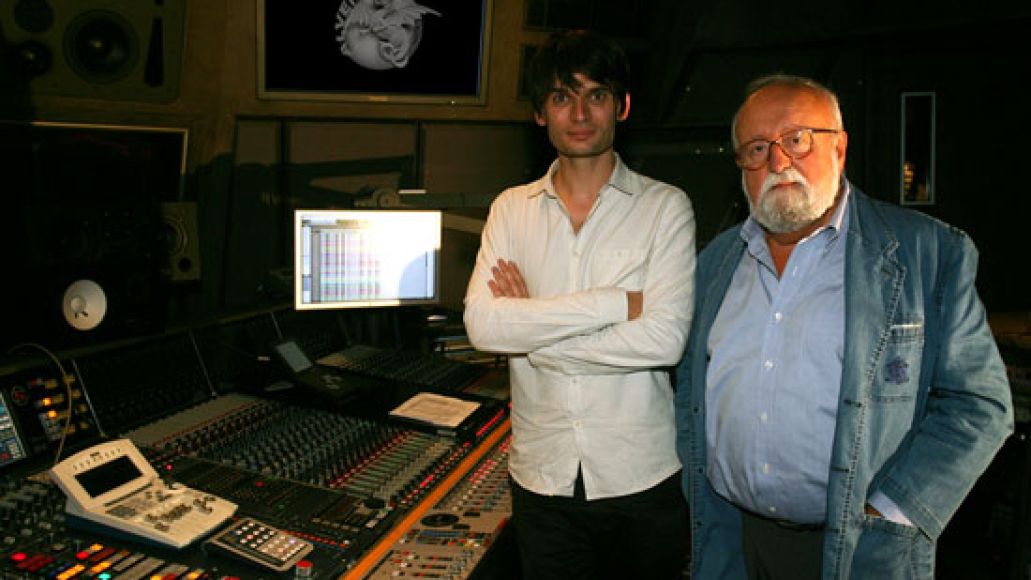 Last weekend, Radiohead guitarist Jonny Greenwood helped celebrate the legacy of avant-garde composer Krzysztof Penderecki by reworking classic Penderecki compositions on stage at Poland’s Sacrum Profanum music festival. Now, as The King of Limbs 2 points out, it appears Greenwood and Penderecki are uniting for an album of original compositions.

According to the website for Sacrum Profanum, Greenwood and Penderecki recorded together over the course of two days last week at Alvernia Studios in Krakow, Poland. Filip Berkowicz, the Artistic Director of Sacrum Profanum, is serving as producer, the National Audiovisual Institute is preparing the album, and Nonesuch Records will release the final product. The entire announcement is posted in full below.

We’ll keep you updated as more details become available. Also below, you’ll find video of Greenwood performing a piece inspired by Penderecki’s ”Polymorphia” during the aforementioned concert at Sacrum Profanum.

“It will be a fantastic event. Krzysztof Penderecki, one of the greatest composers, and Radiohead’s guitarist Jonny Greenwood, who performed Sunday at the inaugural concert of this year’s edition of the Sacrum Profanum Festival, are recording an album! It will be prepared by the National Audiovisual Institute and released by the legendary American label Nonesuch Records. The record will contain compositions by Penderecki and Greenwood that resounded at the concert crowning Wroc?aw’s European Culture Congress. The album’s tracks were recorded yesterday and today in Alvernia Studios, a studio based near Krakow. The producer of the album is Filip Berkowicz, the Artistic Director of the Sacrum Profanum Festival.”

Hat tip to Exclaim for the heads up.

Jonny Greenwood and Krzysztof Penderecki team up for album