Seemingly just another dull night in the dusty sprawl that is Los Angeles, Monday night was a complete journey for a handful of individuals at Big Black Delta’s debut record release party at The Satellite. If you’re an electronic music enthusiast, the name may sound vaguely familiar to you. L.A.’s own Big Black Delta (aka Jonathan Bates) was featured on Daft Punk’s Tron Legacy: R3C0NF1GUR3D on the standout remix “Fall”, technically listed as M83 v. Big Black Delta. That’s right, Big Black Delta come M83-approved, that fact only further bolstered by BBD’s appearance on M83’s recent “Midnight City” remix EP. And even if none of this is ringing any sort of bell for you, be sure that you remember the name Big Black Delta in the days going forward, as the only direction for the band is up.

Fellow L.A. band Letting Up Despite Great Faults (whose music was Top 10 Mp3’d by yours truly), were the major opener on the bill for Big Black Delta’s fourth and final performance of their month-long residency at The Satellite. Their set was slightly tainted by some sound issues that ultimately made the already slightly whispery vocals of Michael Lee somewhat difficult to hear. Despite this, the band played a tight, quick set that was mostly comprised of their latest EP, Paper Crush. The dreamy shoegaze of “Sophia in Gold” and “Teenage Tide” were right at home in the reds and blues of the stage lights and the adjacent dive-y bar. But the crowd became noticeably thicker and more solemn as Letting Up left the stage, and preparations for Big Black Delta were being made. 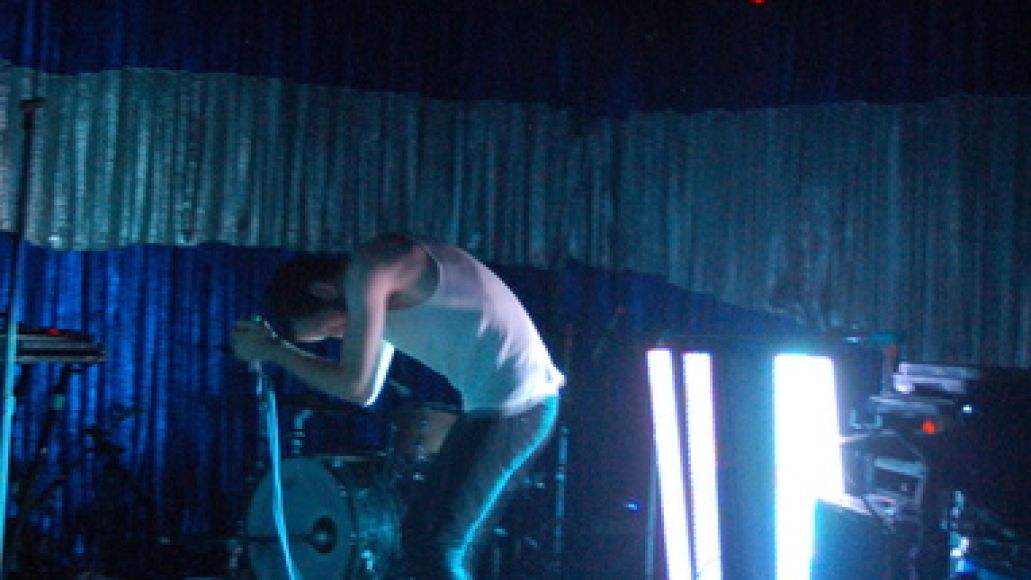 Chalk it up to their venue residency, or to the fact that they didn’t use any of the house lights, but the downtime between sets was minimal. As Big Black Delta quietly crept onstage, the mood shifted from that of a typical jovial dive bar to an all out frenzied attack of flashing lights and noise. Bates stood in front of his laptop and mixer, mic in hand, as the lightboard behind him began to flash in sync with the two female drummers sitting on opposite sides of the stage. The dark club was brought to life with the enormously loud sounds emerging over the PA as Bates danced erratically onstage. Usually, in a setting this small, stage presence comes in a Jeff Tweedy manner – that is to say, in an amiable, friendly frontman sort of way. This time, however, it came in the form of the Iggy Pop, “can’t take my eyes off that guy moving like a crazy person” aesthetic.

As the band ran through their harder, more dance-friendly jams (“The Zebrah”, “IFUCKINGLOVEYOU”), the set only became more entrancing. Between the light panel shimmering in the background, Bates sending his already fascinating vocals through an effects processor, and the synchronized female drumming (the only thing better than a chick drummer is two chick drummers), the bar became emptier and the dance floor came dangerously close to capacity. Bates gestured lazily toward the back of the venue and mentioned that the audience could get some garb there, or they could get it “on the internet for free.” While this may have been a jab at how everything’s free these days, more likely he was referring to the fact that his debut LP, BBDLP1, is available for the price of an email address on his official website for the next seven days.

It’s not often that one gets to witness a local band destroy a native venue just as they’re about to take off. And I believe that’s exactly what happened Monday night at The Satellite.

Echo & The Bunnymen's 40th Anniversary Tour Off to a Rough Start Due to Ian McCulloch Illness: Review and Setlist