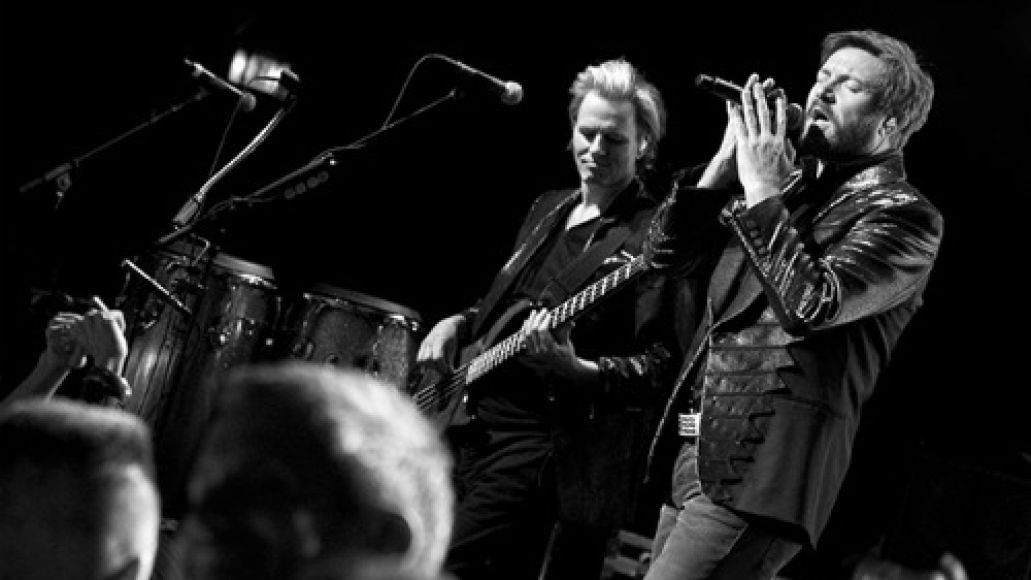 It used to be ironic to enjoy Duran Duran. But this year, they’ve been coasting under finer light: an appearance at Coachella, a David Lynch-directed webcast, and now there’s rumors of them penning the next James Bond anthem. Sonically, they’re still turning the right heads, as their latest effort – this year’s All You Need is Now – garnered plenty of positive reviews. Mind you, it’s the group’s 13th LP to date. As bassist John Taylor told The Chicago Theatre Friday night, “…nostalgia ain’t like it used to be.”

Here’s the thing, though. Frontman Simon Le Bon and his UK collective’s trademark flashy decadence hardly feels cheap today. It’s almost welcome. The over-sensational pizzaz of “Notorious” or the karaoke-destined “Hungry Like the Wolf” ideally fit shopping malls of yesteryear, but once on stage, they’re festival-ready closers. Thanks to an array of dizzying lights, Le Bon’s ageless vocals, and the fact that every member doesn’t appear bloated and/or washed up, Duran Duran comfortably slides into 2011. Hey, if Depeche Mode could headline Lolla… 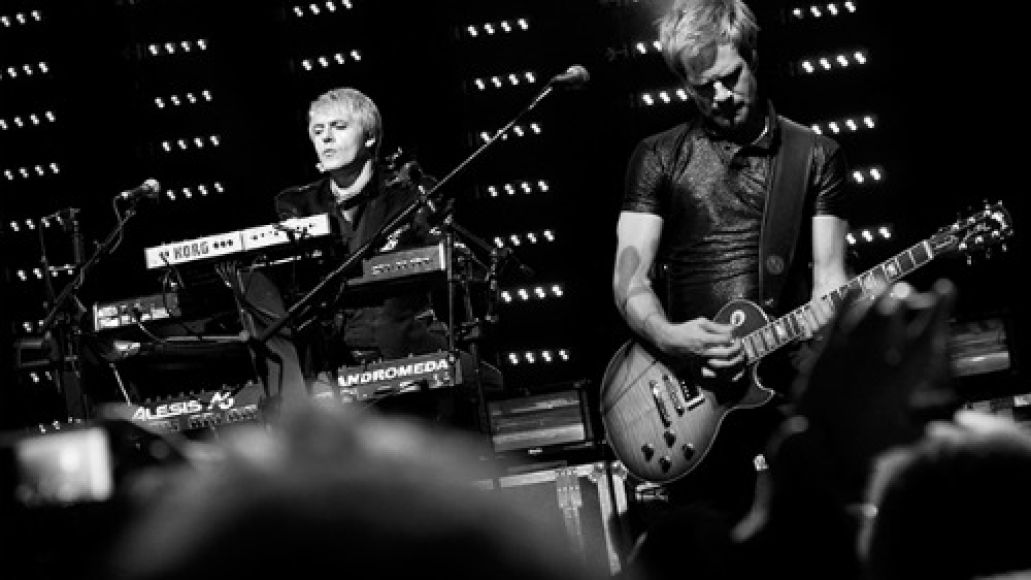 You forget how many hits they really do own. Early in the set, classics like “Planet Earth”, “A View to a Kill”, and 90’s relic “Come Undone”, featuring Anna Ross on background vocals, entertained aplenty. Interspersed throughout were select cuts off the new LP, including the title track that sports the all too contradictory hook: “You don’t need anybody, all you need is now.” Contradictory being that songs over 20 years old rolled out soon after, including boom-box sparklers like “The Reflex”, “Careless Memories”, and “Is There Something I Should Know?”. The latter of which featured a saxophone solo, thus lending more weight to the theory that 2011 truly is the “year of the sax” (see: Destroyer, M83, et al.).

Towards the end, Le Bon dedicated lite FM goldie “Ordinary World” to all the troops finally coming home from Iraq, adding, “It’s been an awful, long conflict.” Needless to say, that went over well. So did greater hits like “Notorious”, “Hungry Like the Wolf”, and an encore of “Wild Boys” into “Rio”. All in all, it was refreshing to hear what some might consider “source material.” So much of today’s buzzier music stems from the past (a topic recently discussed in Simon Reynold’s fantastic book, Retromania: Pop Culture’s Addiction to its Own Past) that seeing an act like Duran Duran live hardly feels like a sinful bath in nostalgia. In fact, come to think of it, it’s moreover a history lesson for today. Get studying.

Setlist:
Before the Rain
Planet Earth
A View to a Kill
All You Need Is Now
Blame the Machines
Come Undone
Safe
The Reflex
The Man Who Stole A Leopard
Girl Panic!
Is There Something I Should Know?
Tiger Tiger
Careless Memories
Leave A Light On
Ordinary World
Notorious
Hungry Like the Wolf
(Reach Up for the) Sunrise
Encore:
Wild Boys/Relax (Don’t Do It)
Rio
——