Classical music isn’t always that funny. In fact, one of the monikers frequently applied to this repertoire is “serious art” music. Laughing, needless to say, is strictly verboten, which is a shame, since one of the main elements uniting Saturday night’s concert by eighth blackbird at New York’s SONiC Festival was humor. Not just “smile a little” funny, but full-on LOL funny. The festival is a celebration of 21st century music written by composers under age 40, a truly amazing feat in these economically challenged times. These young composers have clearly eschewed much of the heavy baggage of 20th century contemporary music, because in their use of styles and syntax borrowed from classical, jazz, and pop, and their embracing of the absurd and silly, they actually want you to laugh.

Out of the seven pieces, five offered tricks, novelties, and moments of silliness. In all these cases, the members of eighth blackbird were not just interpreters of the music, but part of the musical joke themselves, becoming figures within the farcical drama of the piece. Sometimes this had to do with their physical proximity, as in the opening piece by Fabian Svensson, Two Sides, with the ensemble split across from the stage like a game of musical red rover, playing melodic fragments with herky-jerky rhythms, piano/cello/bass clarinet vs. piccolo/violin/vibraphone, bass vs. treble.

Andres used a similar technique for his Crashing Through Fences for piccolo and glockenspiel. Rather than a bracing timbre, Andres created a warm, delicate effect, punctuated by each instrumentalist pounding a bass drum with a foot pedal. The piccolo explored a vaguely Bolero-esque melody as the textures gradually grew in size and intensity. It still retained the whimsical nature of two instruments “facing off” against each other, but Andres’ music went to a more special place than Svensson’s. Like many of Andres’ pieces, one gets the feeling that there’s a complete final idea, and the piece unfolds as a gradual discovery and building up of the various melodic and rhythmic components, culminating in an unexpected four-on-the-floor techno section. 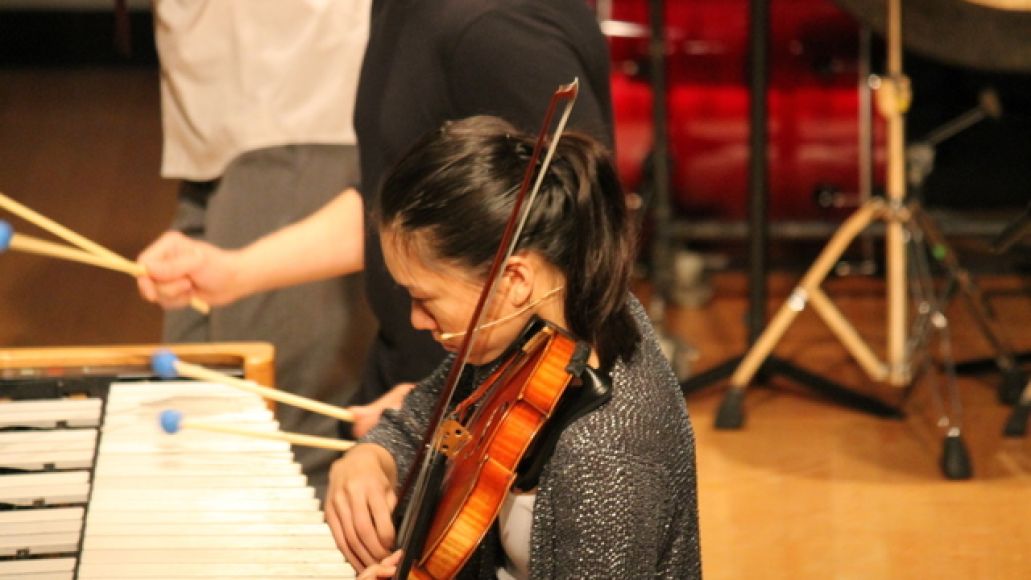 Some of the humor was more juvenile and just plain silly, like Mayke Nas’s DiGiT #2 for piano four hands. Pianist Lisa Kaplan and percussionist Matthew Duvall started the piece with alternating high and low tone clusters, yet when they began incorporating various leg slapping and clapping into their rhythms, it became obvious that this piece was really just a game of patty cake. While it was rhythmically exciting and the players clearly had a lot of fun with it (even laughing while performing), it seemed dangerously close to gimmicky.

Much more successful, and leaning towards the artsy side of funny, was Amy Beth Kirsten’s Pirouette for solo flute. Written for flutist Tim Munro, the performance was as much Munro’s acting as it was his notes. He assumed the role of Harlequin, the playful trickster of Commedia dell’Arte stock characters, devilishly avoiding playing any notes, and instead declaiming a riddle with exaggerated breathiness in a kind of heightened musical speech. He gradually turned these excesses of air into notes as his breath passed over the mouthpiece. Munro displayed a virtuosity of not only his instrument but also of dramatic engagement, fully transformed into the role Kirsten thrust upon him. Dan Visconti’s Fractured Jams was another moment of fun acting combined with virtuosic playing, as a quartet of clarinet, cello, violin, and piano became a garage band of teenagers, a drunken jug band jamboree, a feedback loop, and a kinetic, off-kilter 78rpm record from the 1930s. Visconti’s trick was to make these Ã¼ber-capable performers seem like inept amateurs, a characteristic they embraced with string screeching and clarinet squawking. 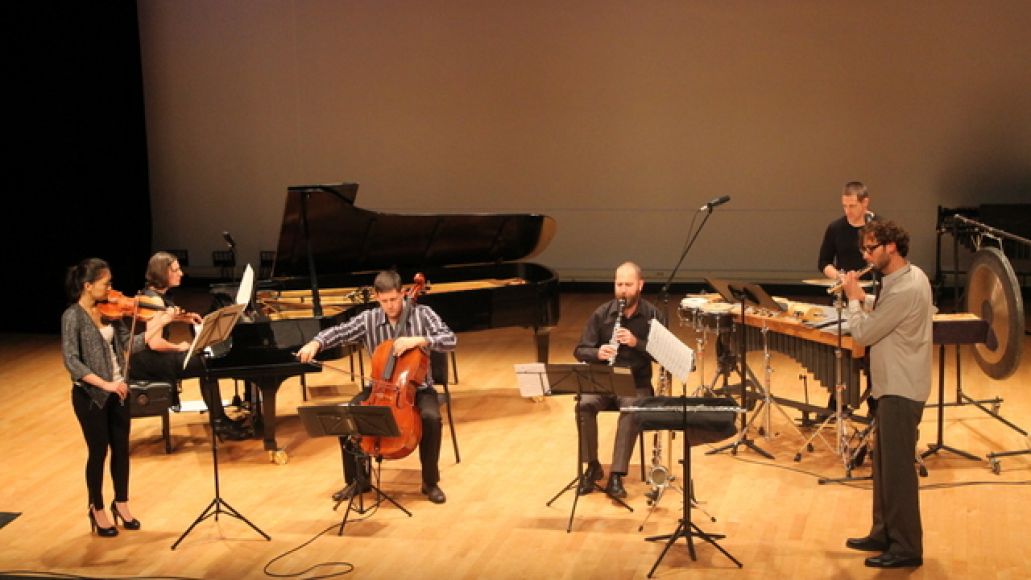 Perhaps lost in all the humor, trickery, games, and acting was just how good the members of eighth blackbird are. They consistently prove why they are one of the top new music groups in the country, not only killing it on their own instruments, but playing together as a group with an almost telepathic unity. Nowhere was this clearer than in the final piece, Bruno Mantovani’s Chamber Concerto No. 2. Without any humorous overtones, this demanding and spectacular piece showed off eighth blackbird’s ability to create a rich, shimmering group sound while still allowing for moments of solo virtuosity. Under a relatively static harmony that pulsated with microtones, the group explored textures, colors, and beautifully dissonant melodies, reminiscent of the spectral music of Grisey or Saariaho, but teeming with jazzy originality and innovative timbral combinations. “That piece was really hard,” Kaplan told me after the show. Given what this group usually plays, that’s really saying something.