For those of you who haven’t visited Echoplex before, it’s a smallish bar just below their sister venue, The Echo. It’s a platform nine and three quarters affair to find the Echoplex, however, as there is no direct public access to the lower floor in the building. Instead, one must cross the street, ford a dingy set of homeless-ridden steps down to the street below, cross the street again, walk to a back alley, and mutter an Elvish incantation in order to find yourself at The Echoplex. Okay, so you don’t really have to recite Elvish poetry, but I’m thoroughly surprised I made it out unscathed by a Balrog (that’s the last Lord of the Rings reference, I swear).

Truly, though, I can’t decide if the layout of the two venues is obnoxious or charming. Certainly it adds a dingy setting that helps bolster the mood for whatever act you’re about to see, but it’s always disheartening to get the secondhand treatment.

The sprightly opener Jonti played a decent portion of his debut album, Twirligig, during his very eclectic set. The man was beaming with youthful smiles and engaging one on one with some of the crowd members up front throughout the performance, which made his set all the more endearing as he ran through his very eccentric take on sampling, making way for the homemade prowess of Gold Panda. 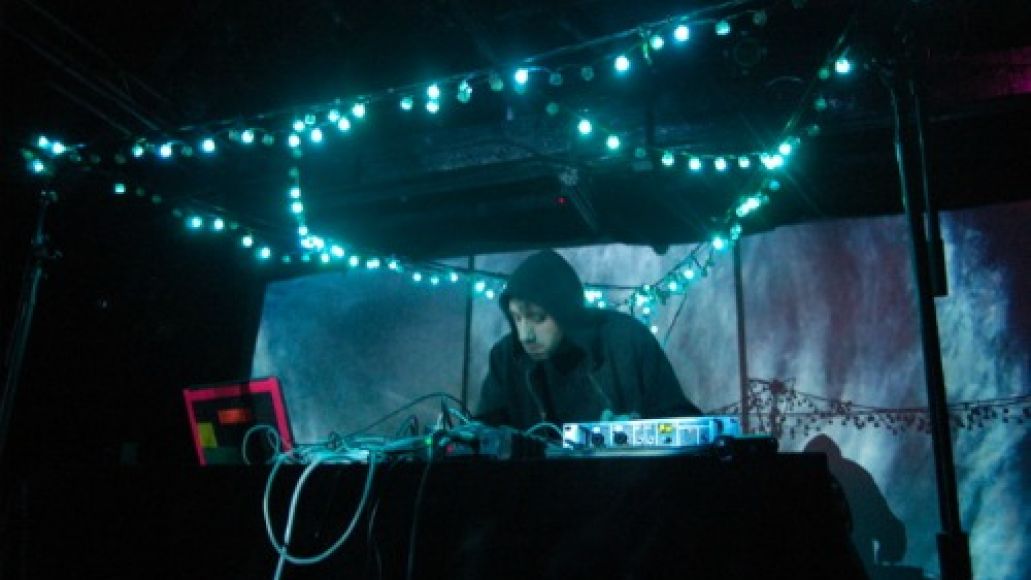 The Essex, UK born producer is no stranger to small time fame – he’s been at it since 2009 and hasn’t broken through in any major markets yet, but he’s fashioned a wonderful creation out of being unknown. Visually, he uses that smalltime fervor to create a stage that is as fun to watch as his melodic IDM is to listen to. Standing beneath a structure made of mic stands and color changing wire lights, Derwin Panda (aka Gold Panda), bobbed his head to the sounds of his own electronics for the entirety of his hour set.

The downside to being so completely DIY is a lack of engagement. The crowd appeared somewhat disinterested at points, in stark contrast to how focused Panda was. It could be that he played a lot of tweaked versions of his back catalogue, but a setlist would be impossible to put together from the audience standpoint. Most of his set was devoted to his most recent LP Lucky Shiner, and the standouts from that album were well received.

There was a moment of particular note, however. The venue underwent a tangible metamorphosis as soon as Gold Panda’s most popular song to date “You” dropped four songs into the set. Whatever mental barrier that kept the hipsters from cutting loose was momentarily smashed. Fedora-clad heads bobbed and (apparently re-hip) Doc Marten-ed toes tapped as Gold Panda played an almost violently loud version of the hit. It wasn’t long until the barrier was reinstated, but for those brief minutes, he completely captivated an entire audience to the point where self-awareness was non-existent, and that’s something truly special.