Yonder Mountain String Band has always been more than a bluegrass band. Their sound touches on everything from reggae to rock, and even the occasional Ozzy Osbourne or Frank Zappa cover. Their jam band improvisational style sets them apart from most of their compatriots. Rather than merely trading solos of blistering virtuosity (which they do plenty), YMSB likes to take things out there, exploring harmonic and melodic territory away from the song’s structure, weaving together songs with insane bursts of jamming, working through a completely different setlist every night.

Usually, all those elements combine to deliver a high octane, kick-you-in-the-face, genre-bending dance fest. For some reason, Yonder performed a slightly tamer than usual performance Saturday night in Manhattan.

That’s not to say that the show sucked, because it most certainly didn’t. Yonder Mountain was at their best during their fast, more traditional bluegrass numbers, such as the classic “Maid of the Canyon”, or the old time fiddling tune”Little Rabbit”. Mandolinist Jeff Austin looked like a man possessed, his eyes bulging as he annihilated the fretboard, barely able to control his own jamming. This was a stark contrast to the stoic stage presence of guitarist Adam Aijala, whose flatpicking solos are much more controlled and calculated, yet equally impressive. Dave Johnston’s banjo completes the soloing attack, yet he somehow couldn’t carry the weight or impact he typically does. 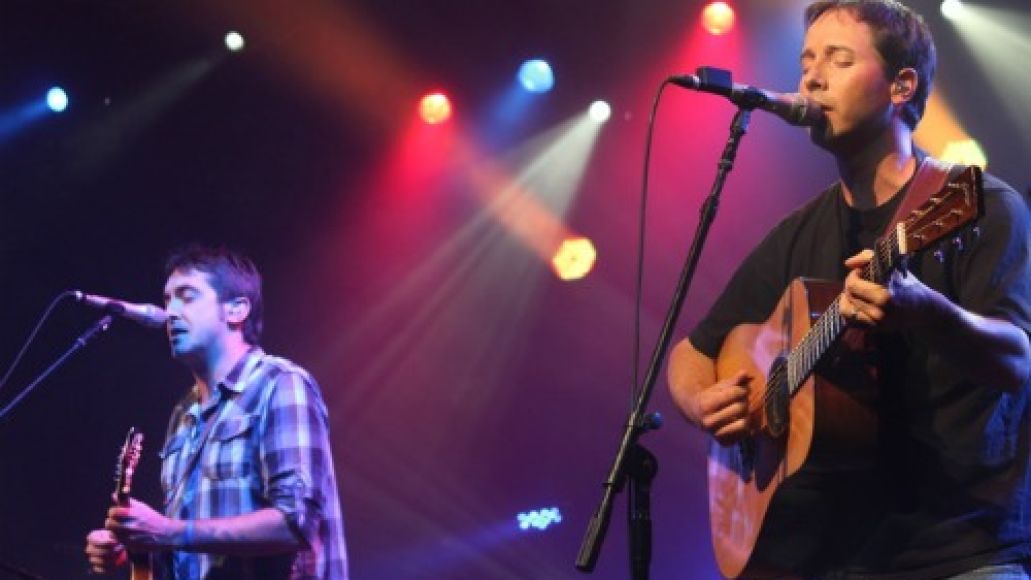 The group’s skill lies in more than just their instrumental prowess. It’s in their excellent songwriting and singing, as well. Interestingly, some of their best songs in this evening were covers. A second set highlight was the slow bluegrass shuffle of Split Lip Rayfield’s “Used to Call Me Baby”, with lush and passionate vocal harmonies on the chorus. A trio of covers of John Hartford, one of Yonder’s bluegrass heroes and a frequent source of cover material, made their way onto the setlist as well. The second set opened with the fun, fast drinking song “Way Down the River Road”, while the first set ended with the pot smoking song “Holdin'”, which didn’t seem quite as laid back and slow as the song’s lyrical content would suggest.

Many of the songs played were newer tunes that seem to be going in a different direction than the classic YMSB sound. Largely absent from the setlist were songs from the band’s first two albums, Elevation and Town by Town, albums that formed the backbone of many Yonder shows and initially built their reputation for live mind blowing. Newer tunes, like “Complicated” and “One More”, are in a more pop/rock oriented vein. These are good songs, well-written with good lyrics, but they felt flat onstage, much more restrained than the band’s usual offerings. Of the new tunes, the best was the funky show opener, “Shake Me Up”, which got the crowd moving early. 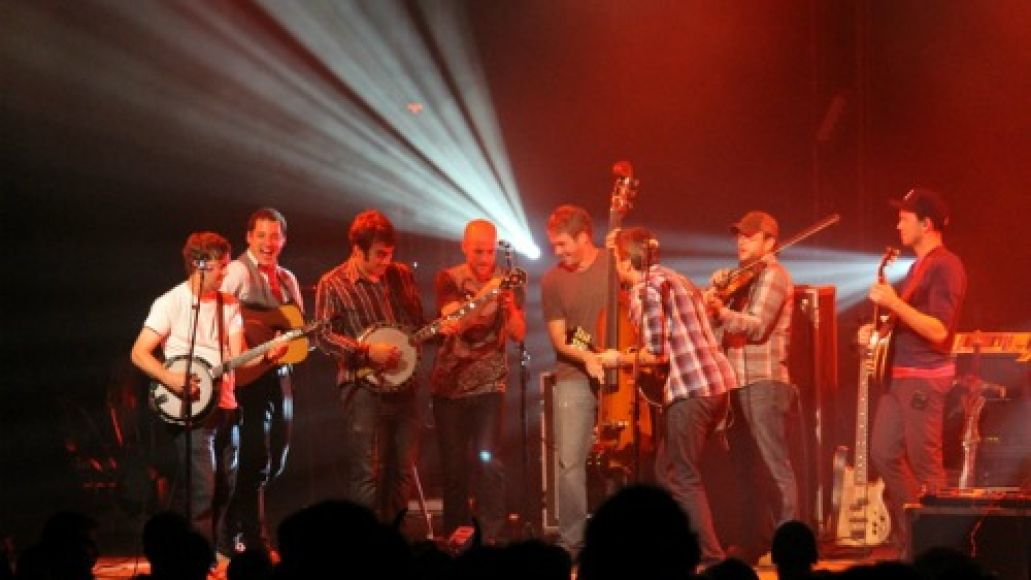 The show’s high point came at the very end, when opening band The Infamous Stringdusters and Noam Pikelny from the Punch Brothers joined Yonder onstage for two extremely energetic songs. Starting with the macabre “Pretty Daughter” and then closing the show with a rocking cover of Danny Barnes’ “Death Trip”, the ten musicians were a powerful and dynamic force that had everybody shaking, their impressive sound filling the room. Austin roamed the stage directing solos, his extroverted persona engaging with individual players as they traded licks, even playing on his back at one point. Bassist Ben Kaufmann and Stringdusters bassist Travis Book had to share a single upright bass, handing it back and forth, and then eventually playing the bass at the same time in a visual/musical showstopper.

Yonder might not be the same band they were in their early years, when they were carving out a sound and picking up fans as they criss-crossed the country. Like many bands, their sound has grown and matured, taken a direction towards a more pop oriented sound. When Kaufmann picked up a bass guitar for a few songs, it almost seemed blasphemous. But YMSB has never been a band to pigeonhole themselves, and that’s why they remain a strong player on both the jam band and bluegrass circuits.

Setlist #1:
Shake Me Up
All the Time
Must’ve Had Your Reasons
Maid of the Canyon
Part 1 (Lord Only Knows) ->
Finally Saw the Light ->
Lay It On the Line
Complicated
Just Like Old Times
Little Rabbit ->
Out of the Blue
Holdin’

Setlist #2:
Way Down the River Road
One More
Far From You
Used to Call Me Baby
Sometimes I’ve Won
Spanish Harlem ->
Keep On Going ->
Ooh La La ->
Keep On Going
Pretty Daughter*
Death Trip*
Encore:
Up on the Hill*

*with the Infamous Stringdusters, and Noam Pikelny from the Punch Brothers