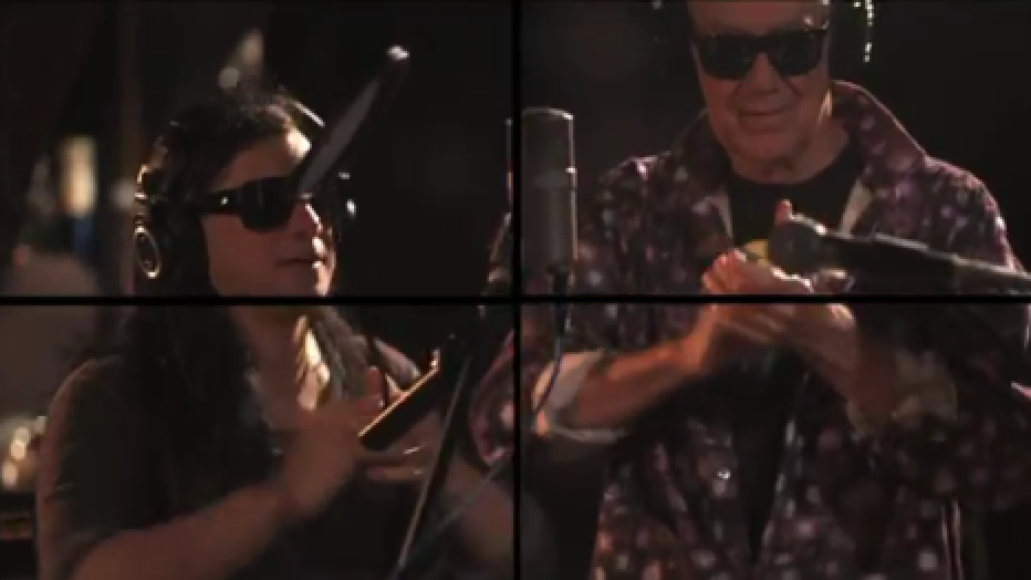 Skrillex is a dubstep producer, often called the Justin Bieber of his genre (in that he’s hugely popular and has the body of a 17-year-old boy). The Doors are a legendary rock group from the ’60s that made rock music dark and sexy. These two acts have absolutely no reason to ever be mentioned together in the same sentence, yet alone collaborate on music. But that’s just what director Amir Bar Lev (The Pat Tillman Story, My Child Can Paint That) did for his new film, RE:GENERATION.

The film features five popular DJs/producers working with artists from five different genres to create music and muse on crossing sonic borders and the true universality of being a musician. Other acts featured include Pretty Lights working with Leann Rimes and Ralph Stanley, Nas and the Berklee School of Music Orchestra hitting the booth with DJ Premier, The Crystal Method recording with Martha Reeves, and Mark Ronson, and Erykah Badu and members of the Dap Kings and Trombone Shorty collaborating on a jazz number.

As for Skrillex teaming up with the surviving members of The Doors, keyboardist Ray Manzarek was gushing over his work with the former From First to Last frontman. “[Sonny] plays his beat, all he had to do was play the one thing. I listened to it and I said, ‘Holy shit, that’s strong,’” Manzarek told Rolling Stone. “Basically, it’s a variation on ‘Milestones,’ by Miles Davis, and if I do say so myself, sounds fucking great, hot as hell. I like to say this is the first new Doors track of the 21st century.” For a taste of what that means (other than causing Morrison to spin in his grave), check out the RE:GENERATION trailer below.

The film is scheduled to debut in early 2012 as part of Grammy Week. Stay tuned for more news and announcements as they’re made.

Remaining members of The Doors recording with Skrillex