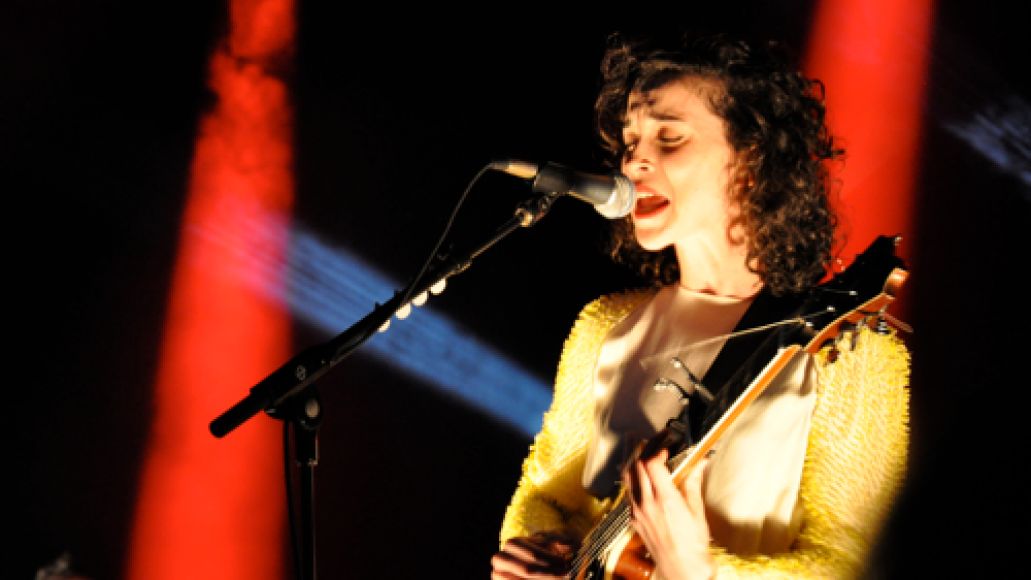 Since the September release of her third LP, Strange Mercy, Annie Clark, aka St. Vincent, has seen a whirlwind of activity, from touring the States to hitting the late night circuit to popping up at festivals. This past weekend at Asheville, NC’s Moogfest, Consequence of Sound’s Research Editor and host of Audiography, Len Comaratta, got a chance to sit down with Clark and her tour manager, Tom Carlson, as they were ironing out some last-minute details for her upcoming European tour.

If you’re a fan of Len’s Audiography series, look out for a forthcoming episode with Ms. Clark herself.

Annie Clark (AC): Trying to coordinate a European tour with a two-day turnaround.

When do you head to Europe?

AC: Right after [Jimmy] Fallon, so the 7th [of November].

TC: The morning of the eighth, ‘cause Fallon is the seventh.

AC: It is. No, I fly that evening to Germany to do some German TV show.

Talk about being busy. And last night you said you had a late gig. Where were you playing last night?

AC: It was really fun. I like those club… I mean… it’s funny…

When you say “Club Gig,” what do you mean, like the 9:30 Club kind of thing versus an arena?

TC: Way too small for them to be playing.

AC: With our gear and our light rig, it was kinda Spinal Tap… or reverse Spinal Tap.

Do you like the intimacy, though, of the smaller shows?

AC: Yeah, I do, I do. It’s fun. A lot of these shows on this tour have been theaters. It’s sort of like very pristine, and we have an intense light show. It comes off well. It’s like a theatrical performance kinda thing, but it’s fun to just get nitty-gritty in a rock club, too. All the shows have been going well to be honest. It’s been a really fun tour.

Well this album is getting huge amounts of praise. It seems like it’s been out longer than just a month or a month and a half.

AC: Yeah, I think there was a lot of lead in to it, so the press people did their job.

Your producer, John Congleton, did a whole social media with Twitter. If you tweet so much, then a single will be released. How did you feel that that played out?

AC: I thought that that worked out well. I’m not a marketing person. I didn’t come up with that idea or anything; it was the in-house people at the label, but I thought it worked out really well. At some point, after maybe six days had gone by and people kept tweeting… it’s on my twitter feed, and I can see what people are saying. And I started to feel like, “You guys, is this kinda mean? People are really freaking out. They’re really ready for this single. Should we just give it to them?” And they were like, “No, no wait, this is the point.” So, it was a little bit of a game, I guess, but it worked out well. It got people excited… or angry.

One of questions I was told that I have to ask by one of our editors, who is in love with this album, is “What was the driving force behind what you were writing for Strange Mercy?” He sensed some kind of retro feminism in some of the songs, but he didn’t understand what your direction was. I didn’t really sense that, the way he was describing it, but he wanted to get your take on what was going on in your mind when you were writing the album. ‘Cause like with Actor, you said it was during a downtime. You were decompressing and watching a lot of films and that inspired you to what you were doing. Everyone keeps saying Strange Mercy is a departure, so what was going on when you were setting down to write that album?

AC: Well, a lot of the influence, at least superficially, on the record is still these little bits of pop culture that I can weave into my own experience. Like the hook for “Surgeon” is “best finest surgeon, come cut me open,” which is…

AC: …yeah, what Marilyn Monroe wrote in her diary. I really fell in love with that particular sentiment. 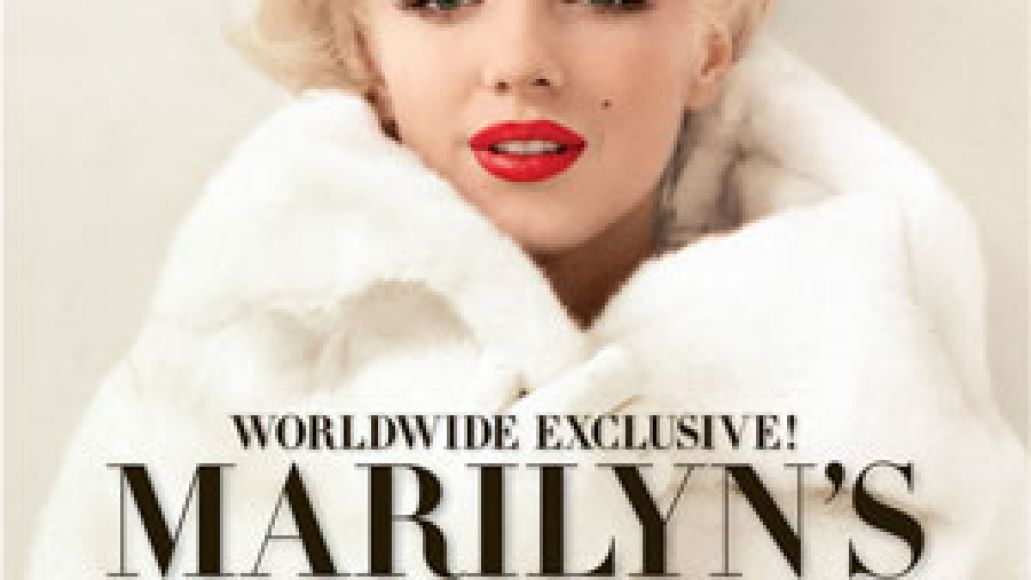 Were you reading up on Marilyn Monroe? How did you stumble on that?

AC: You know what? I read it in a Vanity Fair article. I was in Seattle writing the record, and I was getting very frustrated with what I was coming up with. Lots of highs and lows in a writing process. You know, either you think it’s all good or you think it’s terrible, and there’s not a lot of in-between. And I was in a low patch, and I just thought, “forget it.” I’m just gonna check out of the studio early, just go have a glass of wine, and read a book because nothing is coming out. And I just picked up a Vanity Fair and got really engrossed in that article and her, and I think I probably still have my little journal I was carrying around. In giant quotes, underlined, circled, exclamation point, “Use this”. The next day I went back, and I wrote “Surgeon”.

You seem to be informed by a lot of pop culture. People always comment how even Marry Me was taken from an “Arrested Development” line…

Is that intentional, or do you find that as you’re writing it just comes out of you?

AC: Yeah, that’s the thing. It probably sounds pretty redundant, but everything is inspiration for a song. Everything’s fodder for writing. On the last record, I just straight-up ripped a Hemingway quote out of The Sun Also Rises… it’s in “Just the Same, But Brand New”… verbatim. Hopefully, I can’t get sued for that sort of thing. I like re-appropriated it or collaged it together. But everything is kind of fodder for writing.

When did you start writing?

AC: I started writing songs when I was… probably before probably… we had a piano, and I would tinker around with that and write little bits of songs, and then when I got a guitar when I was 12, the first thing I did was learn a Neil Young song and then write one of my own songs.

Neil Young was the first person you learned on guitar?

AC: Probably. I think it was “Keep on Rockin’ in the Free World”. I really liked that Neil Young and Crazy Horse record at that point in life. But, actually, it’s funny. I don’t know if I’ve mentioned this, but the song “Year of the Tiger” on Strange Mercy, that riff [hums out the musical part] , that’s something my mom used to play on the piano… but I mean, it was sweet, it was sweetly played. Kinda plucky. I gave her writing credit. We co-wrote “Year of the Tiger” together, but that riff was always in my consciousness from a really young age.

Was Glenn Branca the first group you worked with? The 100 Guitar Orchestra.

AC: To say I worked with Glenn Branca is sort of like saying, as if I had walked through a recording studio and been like, “Yeah, I produced that record.” There was an open call for guitar players in New York. “Come for a pack of sandwiches and a coffee. Come and play. Bring your own amp and your own guitar out to Queens and play in this recording session.” I was a fan of Glenn Branca obviously, and everybody in the room was a massive fan of Glenn Branca, and I was just one of a hundred. It feels a little bit… to say I worked with him… Glenn Branca was not asking me for my input.

It was more like, “Here, play this part. Thank you.”

AC: Exactly. We were organized into maybe four different guitar sectors. All of our strings were tuned to the same, different octaves of the same note. When it was our time to go, it was crazy eighth notes and stop and crazy eighth notes, and it was thrilling to be in a room with that many guitars and that many amplifiers.

It must be just ridiculously loud…

AC: It was so loud. I had such a great time.

So, it was only for that one recording that you did that?