When recording this year’s Wasting Light, Dave Grohl and his fellow Foos retreated to his garage in an attempt to capture the rawness of their 1995 self-titled debut. They failed. What they did do, however, was emerge with a near-perfect collection of polished radio anthems that were big on hooks, emotion, and, most importantly, the three-axe attack of Grohl, Chris Shiflett, and Pat Smear. Oh, those guitars. Those guitars! Now, say it in a throat-shredding Dave Grohl snarl. Come on, try it. You can’t, can you? Not many can.

Looking back, the unexpected results make total sense. Foo Fighters was a record essentially created by one man, while Wasting Light was a true collaborative effort, a dynamic on full display in this year’s retrospective documentary, Back and Forth. And although both albums were cut on analog tape, the latter was still digitally manipulated during post-mastering. Foo Fighters was written and recorded by Grohl at Seattle’s Robert Lang Studios. Wasting Light was recorded in a garage that had pretty much been renovated into a professional studio, complete with Nevermind producer Butch Vig and appearances from former Nirvana bassist Krist Novoselic and HÃ¼sker DÃ¼ grouch Bob Mould. You get the idea. Getting back to the group’s raw, and let’s face it, solo roots may have had noble intent, but the boys forgot that somewhere along the way they had become an actual band, a filthy rich one at that, and in a completely different fashion than Nirvana. And that’s okay. Simply put: Foo Fighters craft unabashed arena rock, and they do it well. 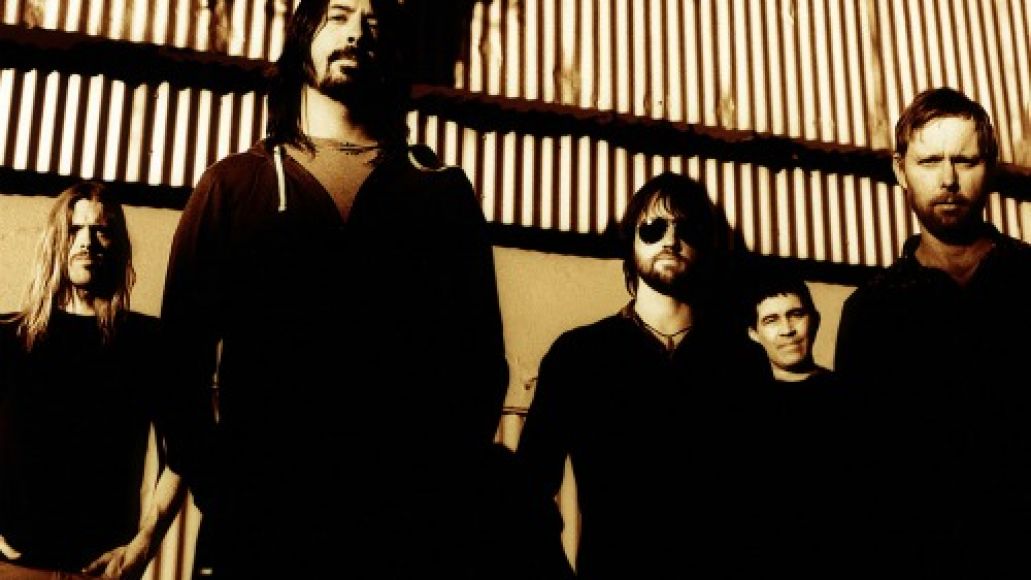 And how many bands can do that? Truly do it without a sense of irony, camp, or sheer boneheadedness. It’s a type of beast that roamed stages in hordes during the ’60s and ’70s (e.g. Led Zeppelin, the Stones, Thin Lizzy, the list goes on) but has since threatened to go the way of the buffalo. Popular rock behemoths like Nickelback go through the motions with imitative stadium swagger, and longstanding outfits such as the Red Hot Chili Peppers chug along on little to no gas. Arcade Fire, U2, and Springsteen (last of a dying breed) all know how to fill a cavernous space with a stellar live show, but their politics often become heavy-handed. Grohl & Co. just know how to rock, and this couldn’t have been more apparent in 2011.

A headlining slot at Lollapalooza performed during pouring rain and crackling lightning made their music all the more thunderous, as did secret shows at intimate venues like Los Angeles’ Spaceland (now The Satellite), Austin’s Stubbs, and Chicago’s Metro. Throughout all of April, the group continued their penchant for executing blistering jams on small stages with the Garage Tour, treating eight lucky fans to highly intimate concerts in their very own homes, or more appropriately, their very own carports. In the same month, the covers-only album, Medium Rare, was released on Record Store Day, featuring new covers (Thin Lizzy’s “Bad Reputation”, The Zombie’s “This Will Be Our Year) alongside older renditions (Pink Floyd’s “Have a Cigar”, Gary Numan’s “Down in the Park”). Leaving no white spaces in their schedule, they also knocked out late-night performances with legends like Joan Jett and Roger Waters. They rock. They roll. And then some.

To be fair, they don’t outright ignore politics. (Does anyone remember Grohl’s frustration with President Bush’s use of “Times Like These”? No?) This year was no exception. Though, even when the band does dive into the political forum (which is rare), they do so with energetic abandon and a smart-alecky smirk. In September, they lashed out against anti-gay protesters from the infamous Westboro Baptist Church in typical Foo fashion, donning exaggerated trucker garb and chugging through their jokey country (and pro-gay) ditty “Keep It Clean (Hot Buns)” from the back of a moving pickup truck. (It should be noted that the entire reason for the protest was the group’s promotional tour video, which featured them wearing (and not wearing) the same clothes in a truck stop packed with slow-motion shower nudity.)

This seriocomic juxtaposition is quite common for the group, though. It’s a part of their brand; they’re funny guys. Ever since their early video for “Big Me”, they’ve exhibited this knack for providing gut-blistering gimmicks. Nothing has changed. In fact, they’re funnier. Look at the two new additions to their impressive videography: “White Limo” and “Walk”. The former showcases a kitschy late-’80s aesthetic and, most notably, a muggy performance from MotÃ¶rhead legend Lemmy Kilmister. While the latter hilariously spoofs Michael Douglas’ cult classic film, Falling Down, and ends up being one of this year’s best videos – but, more importantly, one of the group’s best.

Here’s why: A bespectacled Grohl strolls through all the linchpin scenes of the ’90s film, growing frustrated with a congested Los Angeles and taking out his white-collar anger on an assortment of poorly costumed characters (all played by his bandmates). Only when the song kick-starts into the breakneck throttle of the climax does Grohl arrive at a rehearsal warehouse, strap on a guitar, and launch into his true role as frontman for the greatest mainstream rock outfit in the world. It’s a moment that’s both hilarious and inspiring and a nod to fans well-versed in the group’s dueling displays of catharsis and buffoonery. Just when the viewer reaches an emotional apex, the police show up to arrest Grohl for his acts of assault throughout the day. It’s the perfect cap to the song and a comment on the band’s career. They’re willing to get serious, but not too serious. They’ll always be silly, but not too silly. And that’s why we (and the rest of the world) love ‘em. Keep rocking, boys. Our trucker hats go off to you.

Band of the Year: Foo Fighters