The average layman probably can’t recognize 2% of the bands that play at South by Southwest (I’d lay my life on only getting about 10%), but it is categorically no longer an indie festival. In 2011, SXSW, including the Film, Tech, and Trade shows, was directly and indirectly responsible for collecting $168 million for the Austin economy. In comparison, Glastonbury contributes over £100 million to the local economy, Lollapalooza’s gross revenue was $21 million, and Bonnaroo is said to have a$20 million economic impact on its Coffee County. The fiscal and cultural impact of those 10 days in Austin, TX, grew exponentially this year, so much so that the very brand SXSW Music has cultivated over the past 25 years reached critical mass. It was a precarious mixture of schmoozy industry events and chill day parties coupled with an unhinged Spring Break revelry and DJ Sets lasting until sunup. The unprecedented tier-1 performances, run-and-tell-that breakout performances, innovative marketing campaigns, chorizo for like all three meals of the day, and a keynote appearance by the mounted police at a DFA 1979 show all helped in making SXSW our number one festival* of the year.

Truth: SXSW is one massive hustle —  or grift, depending on your luck — for bands and crowd alike. It’s fueled by a conglomerate of corporate sponsors and industry moguls for reasons that were clearer back at its inception in the 80’s. In an idyllic model, a band would play a showcase at SXSW and garner all kinds of press, get “signed” or “noticed,” and then, presumably, profit. Twenty-three-year veteran of SXSW L. Kent Wolgamott said, “Early on, all of SXSW could fit in a downtown hotel and seven or eight clubs, with a couple hundred bands at most playing over three nights.” In 2011, 2,098 bands officially played (of which 596 were international acts from 57 foreign countries), the event lasted a solid five days, and getting a room downtown meant you had the golden pickup line for the week.

Like the prime hotel real estate, exclusivity is one of the main draw(back)s to SXSW. There’s a certain or perhaps more pronounced infatuation with status at SXSW than with other festivals, but truly it is a multi-tiered community, from locals to tourists, lowly bloggers with “antique” cameras to media mavens with “antique” pen and notepad. Each member of the caste system is afforded a whole year’s worth of music, literally the glut of what people listened to in 2011, in a matter of days. The quantity and quality of the music, by the numbers alone, is what made those beautiful days in Austin stand head and shoulders above other festivals. No where else could you get the bricolage of genres, performance spaces, and atmospheres found at SXSW.

For those without the pricey badge or the reasonable wristband, there were endless parties, official or otherwise, peppering Austin’s streets. You could grab a tallboy and sit at the bleacher’s at Emo’s (soon to RIP) and watch breakout act Cults or check out the buzzed-about Braids in the corner of a bar and see the lead singer cry tears of nervous joy. You didn’t need a badge or anything other than a buzz compass to see Odd Future’s breakout show at The Scoot Inn, where Hodgy Beats jumped 15 feet from the roof of the stage into the crowd.

While we’re on the wild stuff you didn’t even need to pay for, how about Jack White showing up in Austin, selling records from his mobile vinyl store, and playing “Dead Leaves on the Dirty Ground” on his acoustic guitar? Or The Strokes (or Bright Eyes!) performing a free show at Auditorium Shores with 20,000 people in attendance and fireworks launching off in the background. Or Liturgy playing in a room about 30 sizes too small and not being able to hear for the better part of the day. Or the entirely free and stacked lineup of Fader Fort. Or, shucks, our lil’ party.

For the mid-tier folks, like myself, with a modestly priced wristband, there were showcases featuring James Blake’s second ever US show, Andrew W.K. performing a bizarre set with Nardwuar and Cole from Beach Fossils, The Antlers premiering Burst Apart front to back, the new soul man Charles Bradley taking his first bow into the spotlight, Shabazz Palaces making one of their first performances, TV on the Radio with their first performance in a minute, Okkervil River’s homecoming show, which was met with awkward cheer, and whole days and nights filled with teeth-cutting bands and DJs and MCs.

Finally, the somewhat VIP treatment (which is honestly based on credentials, who you know, and being in the right place at the right time. It’s not really VIP at all, just dumb luck) offered truly unique performances for those who got in to see Kanye West and his G.O.O.D. Music crew trotting out tracks from My Beautiful Dark Twisted Fantasy for the first time in a former power station, Foo Fighters performing all of Wasting Light front to back at Stubb’s BBQ’s backyard, Queens of the Stone Age performing their debut album front to back, and hundreds of secret shows, parties, after-parties, hotel lobbies, not to mention the riotous disobedience that took place at Death from Above 1979’s first show in five years, which you can take a look at here. 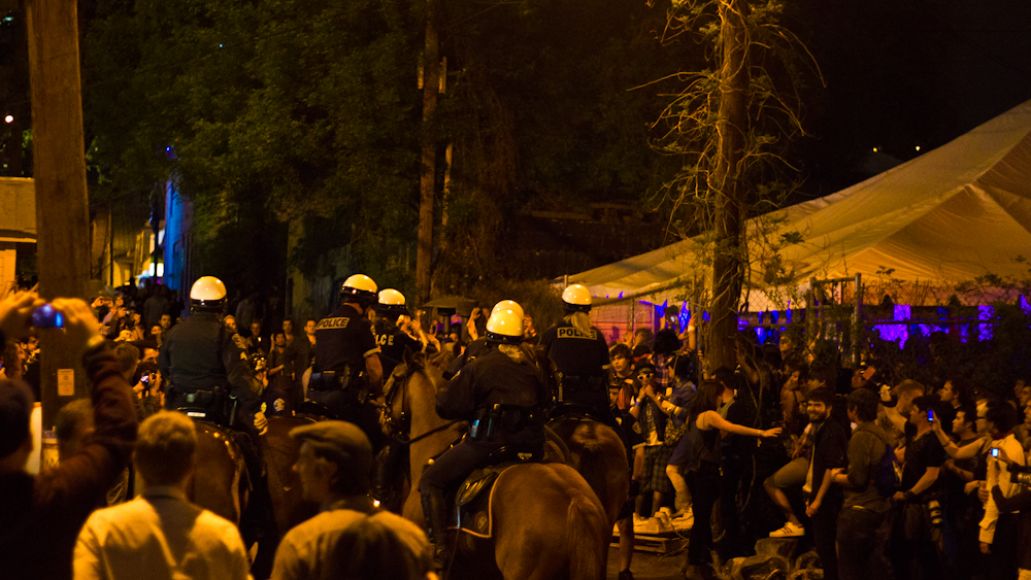 The incident at DFA 1979 was both the apex and the nadir of the festival and probably was to SXSW what the fires were to Woodstock ’99. It didn’t ruin the festival, but it signified a shift — that it wasn’t what it used to be. It’s still Austin, and the din of the streets until 4:00 a.m. will never change, but SXSW this year was at capacity in every sense of the word, pregnant with great food, local commerce, endless music, and the predictable complete douche-boxes. So many times did this nonplussed sense of awe overcome me as the words “overcrowded” and “untenable” and “unsustainable” floated into my head. It must be the goal of SXSW 2012 to continue being the pioneers of innovation and remain the #1 spawning ground for music legend, the stuff that nurtures nostalgia for the years ahead. SXSW 2011 created the most indelible and impressionable memories for us this year. That’s why we go to these things, don’t we?

*We’re aware that SXSW could be considered a “conference,” but the overrun of festival-like production and execution pretty much throws it into the pack with the rest them. For further arguments regarding onomastic semantics, please refer to The Gathering of Juggalos, Capitol Hill Block Party, and the Electric Daisy Carnival.

Festival of the Year: South by Southwest