Two years shy of its 40th anniversary, Pink Floyd‘s The Dark Side of the Moon‘s cultural longevity and continued sales worldwide are a testament to its iconic status. Few albums are as widely regarded for having such a deep listening experience and no amount of cynicism towards the album’s popularity can overturn the global verdict: It’s one of the greatest albums of all time. In a music market where every noteworthy album is getting a box set, it’s high time that the third-best-selling album ever got the luxury treatment as well (and we mean luxury). If you like your box sets posh and are truly ready to dive off the deep end into Dark Side, the Immersion Box Set is a must-have addition to your record collection.

Dark Side has already seen a fair number of remasters, and what little was left to do to bolster the album’s already stellar audio has now been done. This time, seasoned Pink Floyd producer James Guthrie has applied an analog remastering process preferred by many sound-geeks over the digital. This mix is available in standard CD format as both the “Discovery” and two-disc “Experience” editions of the album. However, only with the Immersion Box Set will you receive the ultimate experience: DVD and Blu-ray discs featuring the 2003 5.1 mix (the band’s preferred edition), the 1973 LCPM stereo mix, and for the first time since 1973, Alan Parson’s quadrophonic mix. Provided you’ve got the equipment to make it worthwhile, these discs are the core selling point for audiophiles. (You’ll never hear the album better than the uncompressed 5.1 mix on Blu-ray.) With the Immersion Box Set you can listen to all versions of Dark Side of the Moon at the highest quality modern technology can manage, all in one place. 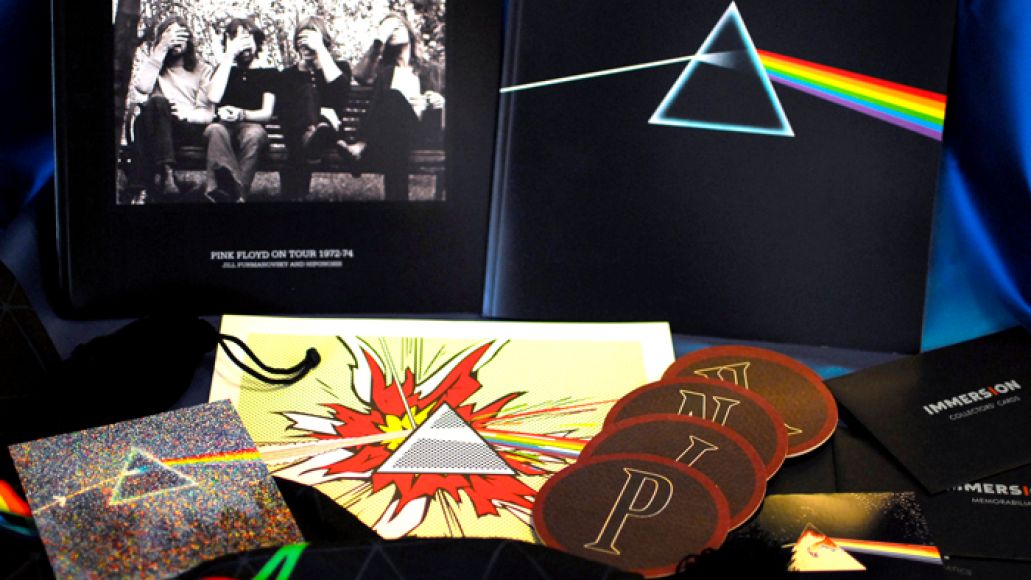 Of course, there’s a lot more. The Blu-ray and an additional DVD provide some top-notch visual accompaniment, the most exciting of which is Floyd’s concert screen films from when they toured with the album between ’74 and ’75. Three programs are available: The British Tour, The French Tour, and The North American Tour. Though many of them share elements, each is unique and features different track listings and sometimes drastically different sequences. These films don’t provide visual programming for the entire album, just up to the points when the the music would fade out and the band would take center stage. The DVD/Blu-ray also includes a 2003 documentary on the making of the album and the 5.1 remix process, featuring interviews with all members of the band, as well as two live clips from a ’72 performance in Brighton. It’s not enough that these clips were dug out of the archives, all of the visual and audio components on these have also been remastered to the highest quality possible.

One of the most surprising things about the visual discs are the menus. Put in the Immersion DVD, and you’ll be treated to a series of intense remixes, sampling from the album’s classic elements and re-envisioning them from a fresh perspective. There’s a different one on every menu page. Though short, they’re pretty amazing and not included on any of the bonus discs. We asked Andy Jackson, longtime Floyd collaborator, who had a hand in much of the set’s remastering about them. “Where’d these remixes come from? Is this part of a larger project? What’s… uh… the deal?”

“It’s just from seeing a lot of music DVDs where no real effort had been made, and the menu loops were just a bit of one of the songs. It’s really rubbish. We liked the idea of abstractions from the songs. You also have to bear in mind that if you leave the disc running on a menu, it’ll loop round endlessly and can be Chinese water torture!

It’s something we started doing 3 DVDs ago (David Gilmour’s Meltdown). We had a Pro Tools transfer of the Dark Side multi-track and just got our remix heads on. The previous projects, we got into ‘mix and match’ mixes, elements from different songs that would combine (for example, as they are in the same key). This one was less appropriate, plus we didn’t need so many loops, so we could get enough from the basic songs without getting too complex. There is no bigger project. I wish there was. I love some of this stuff.”

Curious to hear these mixes? Have a listen:

Also hidden in these menus is a fascinating treat: the full 18-minute interview recording with road manager Roger “The Hat” Manifold, whose voice and distinctive laugh make up some of Dark Side‘s most memorable clips. His is the only remaining full interview tape, recently discovered and presented in Easter Egg form, fully restored, complete with a lewd poem about a kitten he once had. Listen to it here.

Included with the Immersion set, as well as the Experience edition, is a previously unreleased and newly mixed 1974 live performance of the album from The Empire Pool, Wembley. You couldn’t ask for a more perfect live recording. The mixing, done by Jackson and Damon Iddins, is crisp and well-layered, and the performance is fantastic. “Great Gig in the Sky” and “Any Colour You Like” are appropriately jammed out beyond their album length, with “Colour” coming in a full five minutes longer. Classics like “Time” and “Money” are performed with a raw wildness that could’ve only come from that moment in time. 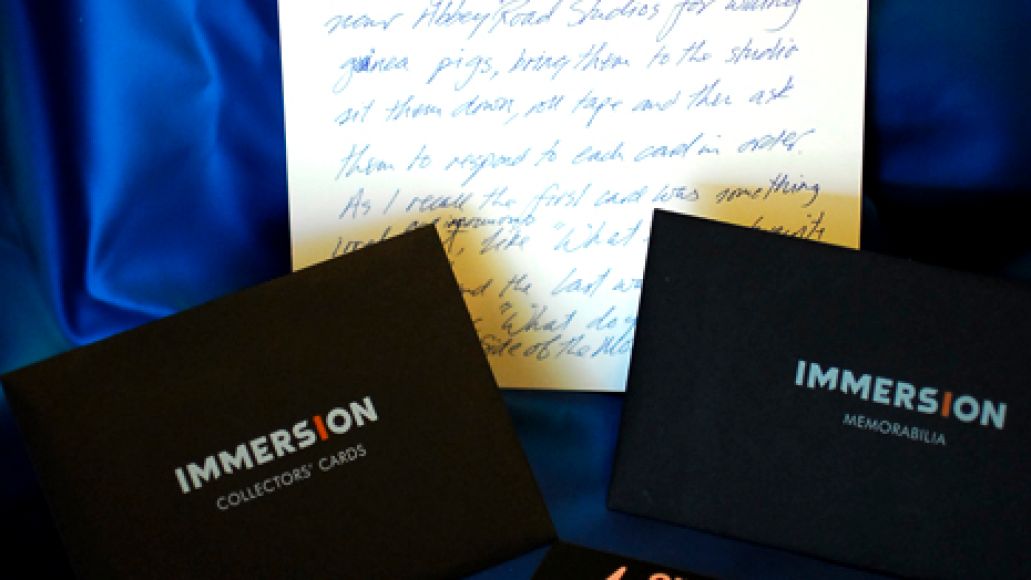 The disc’s-worth of bonus audio content exclusive to the Immersion set is a Pink Floyd archivist’s wet dream. The disc chronicles the gestation of the album through two home demos (Richard Wright’s “Us and Them” instrumental and Roger Waters’ shed recording of “Money” which he elaborates on in the included documentary), followed by three live tracks from July ’72. The latter find the band developing the album on tracks such as “The Travel Sequence”, “The Mortality Sequence”, and an early “Any Colour You Like”. The disc’s focal point is an early mix of the entire album from December ’72. As a working draft it offers a unique perspective into the nuances of Dark Side‘s development. Notably, most tracks don’t blend as they do on the final album: On “Us and Them”, the vocal echos aren’t as present, and “Great Gig in the Sky” features dialogue from Apollo 17 astronaut Gene Cernan, recorded within the month of this mix’s completion as he returned from the last manned trip to the moon.

It’s a lot to take in: six discs overflowing with legendary content. But that’s not the end of it. At $120, this box set isn’t just a tome of music, it’s chock-full of “goodies.” All the packaging is designed or overseen by Floyd’s visual go-to guy, Storm Thorgerson. The set includes both a lyrics/art book and a photo book which are both soft cover and exceptionally laid out. However, the photo book lacks annotations or essays to give the images more context. There’s also an art print of a Lichtenstein-style take on the album’s iconic cover. Then there are some stranger but still interesting items: a replica Dark Side tour ticket stub and an adhesive backstage pass, four trading cards featuring rare Floyd/ Thorgerson images (different ones come in future sets), and a reprint of a handwritten note explaining in retrospect how the Dark Side interviews were conducted. Heading towards ridiculous: This set, and all other Pink Floyd Immersion sets, come with three “collectible” marbles, nine “collectible” coasters featuring Thorgerson sketches, and a Dark Side print scarf. Yes, every box set will have its own versions of marbles, drink coasters, and a scarf. 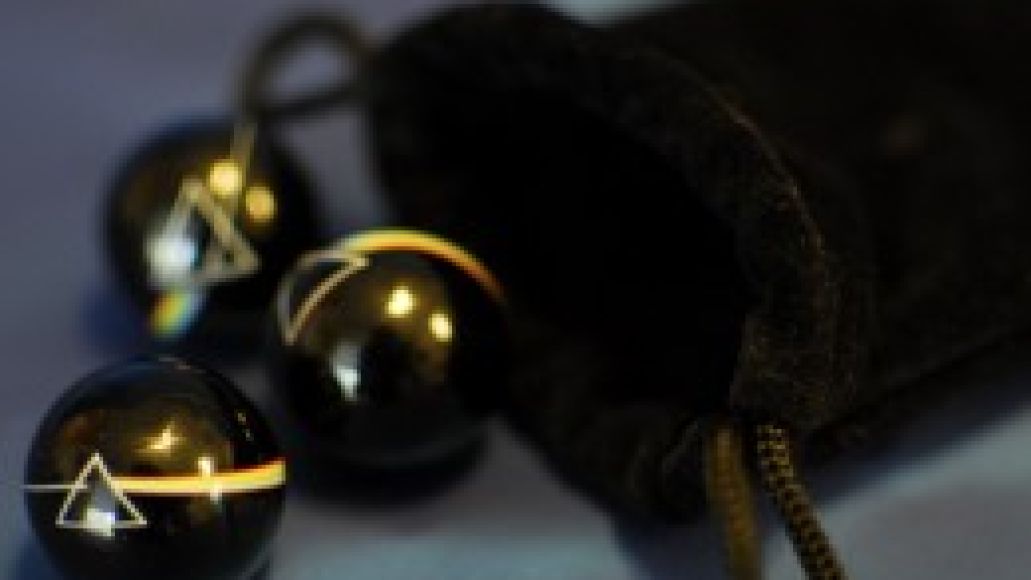 It’s easy to see these extra items as needless clutter by comparison to the music and visuals. Something that emphasizes this is the nonsensical packaging. Four of the discs are pegged onto nubs at the bottom of the box, making it difficult to access them with all the accessories sitting on top. Not only is this an odd placement, but inefficient as well in many cases you’ll open a new box to find the discs loose and blemished. However, the Blu-ray and the bonus disc are conveniently in unique sleeves elsewhere in the box.

While the price tag is well worth it for Dark Side, with a surplus of incredible audio and bonus tracks, the question is: Will the other Immersion sets be able to live up to this one? Sure, they’ll all have new 5.1 surround mixes, and that alone is worth quite a bit. However, with each of them bogged down by variations on the same collectible glut, the bonus content will have to be earth-shattering to make continued $100+ purchases worthwhile. The Wish You Were Here set was recently released, and The Wall comes out in February with additional Immersion releases expected later in 2012. After throwing down for Dark Side, will the two-disc Experience sets seem more appealing? Only one way to find out! We’ll keep digging deep into these sets and reporting our findings until we’ve lost all our collectible and collective marbles.

What's in the Box!?: Pink Floyd - The Dark Side of the Moon Immersion Box Set