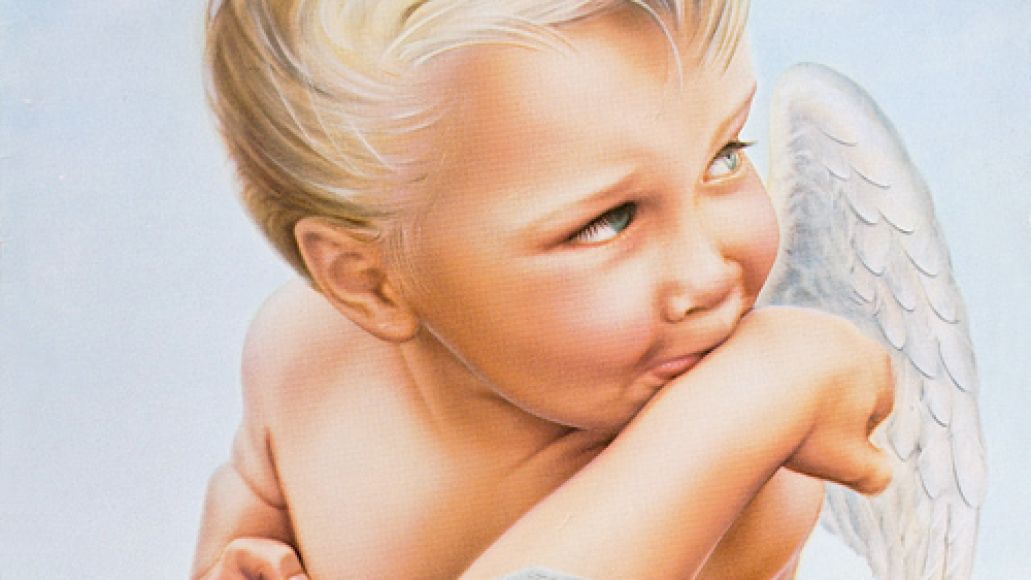 Internal tensions within a band can often result in some amazing creative output; Cream’s entire existence, Fleetwood Mac’s Rumours, and the latter half of the Beatles’ catalog prove that. Van Halen’s 1984 is another example. However, where the Mac’s fire was fueled through romantic entanglements amongst band members and a romantic relationship has been implicated in the Fab Four’s eventual dissolution, Van Halen’s drive, much like Cream’s, was the combination of enormous talent clashing with extreme ego – the ever-expanding artistry of Eddie Van Halen and the living embodiment of rock and roll excess that was (and still arguably is) David Lee Roth.

Released the first week of January 1984, the sixth and final “Van Halen” album (Yes, the band with Sammy Hagar was a good band and produced some good music but anyone who claims Van Halen without Roth is the same band is like saying Queen with Paul Rodgers is still Queen), 1984, was Van Halen’s creative, commercial, and critical peak.

The songs on 1984 represent the best (and maybe some of the worst) elements of eight years together as a band, fusing the party rock sounds of VHI & II, the maturing nature found on Women and Children First and Fair Warning, and the band’s flirtation with the mainstream/pop world through the cover heavy Diver Down. In hindsight, it’s appropriate that this album would also be the band’s swan song.

Combining the new wave/synth pop sounds of keyboards and the over-the-top guitarisms of hair metal on the opening single “Jump”, Van Halen managed to blend two of the most popular sounds associated with the early ‘80s allowing the band to crossover to an audience that they had briefly approached with “Dance the Night Away”, “You Really Got Me”, and half of Diver Down. One of the first songs written in Eddie Van Halen’s newly built personal recording studio, 5150, elements of “Jump” (including a synth line taken from Hall and Oates “Kiss On My List”) had their origin as far back as 1980 during the Women and Children First sessions. The song originally came together when Eddie, his brother Alex, and band engineer Don Landee met together in the middle of the night for some quasi-secretive sessions during the studio’s construction. According to band producer Ted Templeman, upon completing what would become “Jump”, the brothers called him up full of excitement over what they had just written.

Eddie Van Halen remembers it differently, saying in 1995, “The first thing I did up here was ‘Jump’ and they [David Lee Roth and Ted Templeman] didn’t like it.” He went on to insinuate their dislike for the material was rooted in them being upset at Van Halen building their own studio away from Roth’s and Templeman’s influence. Roth’s hesitation, however, appears more the result of a clash of artistic visions. Roth sought to maintain the band’s focus on traditional hard rock, avoiding the overt and obvious usage of synthesizers and to have his guitarist concentrate on the guitar. Despite Van Halen’s new studio, the stylistic conflict between Roth/Templeman and Van Halen can be seen as early as the band’s Fair Warning sessions, when Van Halen’s complex songwriting was counter to Roth’s pop flamboyance. There singer and producer gave in to guitarist, resulting in a commercial disappointment with moderate sales and no chart hits, despite live favorite “Unchained”. When the horns locked again during the making of 1984, once again singer and producer acquiesced, only this time the result was the biggest hit of the band’s career. Released a few weeks before the album, “Jump” became the first Van Halen song to hit #1 (where it stayed for five weeks) and the primary reason for the album’s commercial success.  With its rolling synth line, “Jump” is easily the most recognized song in Van Halen’s catalog.

Despite 1984 having the label as a keyboard/synth rock album, it really isn’t (other albums used keys just more subtly). The only other song to feature synthesizers is “I’ll Wait”, the second single released from 1984 (not including the one-minute intro titular track “1984”, given that it’s used more as an intro to “Jump” and elements of which were actually performed as an intro to Michael Anthony’s bass solo on the Diver Down tour). Co-written by Doobie Brother Michael McDonald, where “Jump” had the obvious circular synth loop playing upfront in a very “happy” tone, the keyboard intro to “I’ll Wait” is actually a bit dark, yet still retaining a heavy nature to it. If Roth felt that the use of synths on “Jump” would distract and dilute the band’s sound, he probably shit a brick when he first heard “I’ll Wait”.  The song features keys almost exclusively, including a synthesized bass line and drummer Alex Van Halen’s heavy use of a Rototom drum kit. Rototom’s had been used by rock greats like Nick Mason and Roger Taylor, but their extensive use on Duran Duran’s self titled debut probably drove Roth nuts. Both he and Templeman sought to have the song removed from the album; however, thankfully for the benefit of the album and the listener, they once again lost to Van Halen and Landee.

Both “Jump” and “I’ll Wait” serve to prove that despite the inclusion of keys a band could still retain its hard rock edge without sounding prog or campy. But if any other proof was needed that Van Halen could still sonically destroy arenas it is the remainder of the album. The obvious go-to’s are the album’s third and fourth singles, “Panama” and “Hot For Teacher”, both of which feature Eddie Van Halen’s blistering fingerwork and his brother Alex’s earth shattering drumming. They’re also prime examples of Roth’s seedy sense of humor, heard lyrically and seen through the band’s videos.

A great example of Van Halen’s party rock antics combined with the monstrous sound a la “Unchained”, the dual assault by the brothers Van Halen as “Panama” opens should immediately put to rest any concerns that the band had gone soft with their first single. And if it doesn’t, wait an additional 10 seconds for Anthony’s bass to smack your head. Roth’s lyrics combine his trademark wails and his seductive slow-burn resulting in a classic case of misdirection. Later, Roth would tell Howard Stern the source of the song came from watching an auto race featuring a car named “Panama Express”, however, Panama is also the name Roth gave his 1969 Kadett Caravan. The song was written as a response to critics claiming that all Roth ever wrote about was partying, sex and cars, when in fact he had never written any “car songs”. Despite its suggestive lyrics, reading them knowing the song’s true impetus, everything fits and makes sense.

Suggestive or not, “Hot For Teacher” is about sex. Specifically the pubescent school-boy desires that fill young teenage boys’ minds. Beginning with Alex’s steady drumming akin to a revving engine, once he settles into a rhythmic pattern the stage is set for Eddie to slide in with his classic virtuoso noodling on the fretboard.  Despite “Hot For Teacher” being one of the hardest rocking songs on the album (as well as one of the most humorous with its tongue in cheek background dialogue), it would have never received all the attention without its accompanying video. Following through on its theme, the video can be boiled down to a class room becoming a stripper’s runway as the teacher provocatively dances in a bikini over fawning teenage boys. Of course, the video caught the ire of Tipper Gore’s Parent Music Resource Center, which protested its sexually explicit nature, however, such complaints simply fueled sales, extending 1984’s success as well as becoming one of the most successful and influential videos for a young MTV.

The remaining four tracks are all serious rockers and all do so in their own way. “Top Jimmy” begins with a soft, slow noodling on Van Halen’s guitar that breaks out into a frantically driven number, that tributes James Paul Koncek of Top Jimmy and the Rhythm Pigs, a resident band at the influential Cathay de Grande nightclub in Hollywood and would sometimes feature guest performances by Roth. “Drop Dead Legs” also begins with a slow, methodically laid out intro but unlike the softness of “Top Jimmy’s” beginning, “Drop Dead Legs” is a bit sludgy and fuzzed out more, and in hindsight as the song opens up, the guitar lines are very informative as to the future of Van Halen’s guitar sound with Hagar on vocals. After the intro and once Alex’ drums blow the doors down, “Girl Gone Bad” can easily claim the title of the hardest, most rocking song on 1984. The extreme power delivered here makes it almost impossible to believe that Van Halen wrote it in a hotel closet to avoid waking his then wife, actress Valerie Bertinelli. Lastly, “Girl Gone Bad” is everything that Van Halen ever set out to be in one complete, tight package.

Considering that 1984 went on to be the final VH album with Roth it is only appropriate that the band chose to close the album with “House of Pain”, not so much for the lyrical content but rather its historic nature. In Van Halen’s early days prior to being discovered by Ted Templeman at the Starwood in Hollywood, the band had recorded a demo tape with an alternative version of what became “House of Pain”. The band passed the demo to Gene Simmons’ of KISS, only to have his management say that the band had no chance of ever making it.

Despite the critical and commercial success of 1984, it wasn’t enough to prevent the band from fracturing. Whether he quit or was fired, the stylistic and personality differences between the band’s two major forces eventually forced Roth and the remaining three band members to separate. Roth carried his traditional hard rock leanings to 1985’s Crazy From the Heat EP, and a year later on his debut solo LP, Eat ‘Em and Smile. However, he never managed to achieve any success akin to that which he enjoyed with Van Halen. The band on the other hand, as history has shown, carried on with a new singer, a new direction, a larger audience, more creative freedom and more money (though, as of 2011, it’s now arguable that the Roth Era has finally outsold the Hagar Era). Of course, conflicts eventually arose between Hagar and Van Halen and history would repeat itself, but rather than have a monumental game changer like 1984 come from the conflict, this time the end result was to add Extreme’s Gary Cherone. They chose poorly.