The grand master of bedroom angst was in London Wednesday night to preview Old Ideas, his first album in seven years, to a group of uncommonly awestruck journalists and industry. From the reverential way Leonard Cohen was greeted it seemed the evening would be as celebratory as revealing. At 77, he shows scant signs of slowing down. Maybe this is because Cohen could scarcely decelerate much more, such is his languid pace and ready panache.

“The lazy bastard living in a suit,” to quote opening track “Going Home”, appeared dapper in dark grey with trilby pulled down over his brow, occasionally lifted to reveal a carpet of closely cropped grey hair. His trim frame and still handsome profile belies his years, similarly remaining mentally sharp. With Cohen taking a front seat by guest interviewer, Pulp’s Jarvis Cocker, the 10 songs from Old Ideas were replayed to a screen backdrop of song lyrics alongside a collage of Cohen’s scribbled notebooks and drawings. The inside cover of Old Ideas, housing his sketch of a naked woman and skull, suggests that his enduring concerns with sex, mortality and redemption remain. On screen, the words crystallized; words, almost always poetic yet allusive as ever, while the music just ebbed and flowed around them.

Albums deserve more than a single listen for impressions to form fully but the attention and applause engendered spoke volumes. In the dialogue that followed, Cocker bravely attempted to tease secrets of the songwriter’s art from Cohen, who largely was having none of it. The sparring was nonetheless fascinating with Cocker doggedly dangling the bait and Cohen constantly eluding the line. I mean where do you go when the response to “How is it for you to listen to your own records?” was “I wasn’t listening.” Though he added postscripts to questions, the skill Cohen used to deflect some all too earnest inquiries was a delight. It’s his version of Hamlet’s antic disposition you could say; his method in madness. Asked about his deepening vocal timbre, he perversely put it down to giving up cigarettes. “I thought it would destroy my whole position and my voice would rise to a soprano.” He vowed to take up the habit again on reaching 80, just so he could smoke on the road! 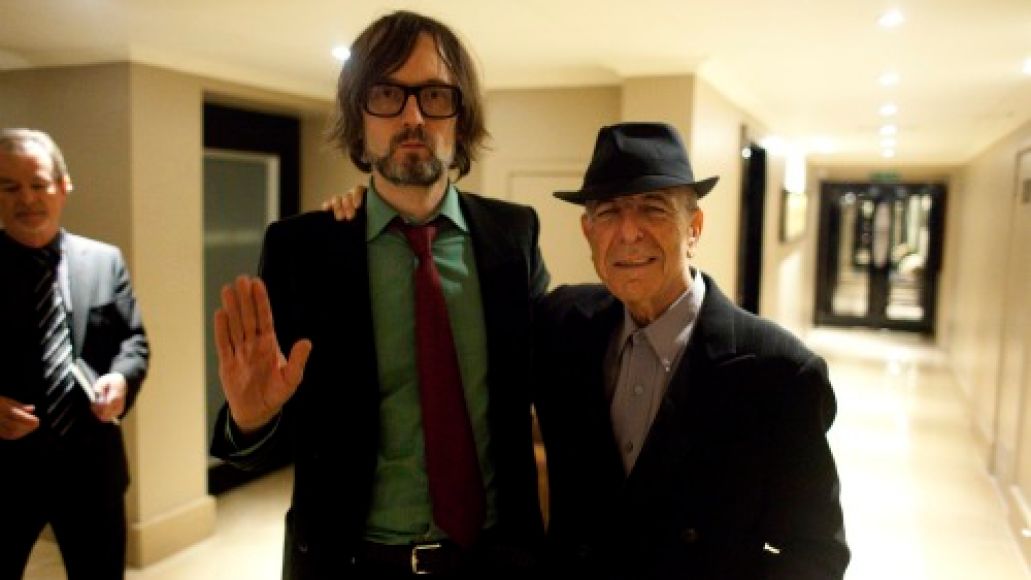 The wit in Cohen’s responses had a dose of realism too; whereas fame as a songwriter once carried much credence with the opposite sex “now it doesn’t really matter one way or the other.” Cohen declared a love of poetry early on, especially that of Yeats whom he said “had a willingness to put his personal life on the line,” and the Spanish writer, Federico Garcia Lorca, after whom he named his daughter. Judging by the notebooks on screen during the album playback, you might expect Cohen to be a prolific ideas generator. Yet he claimed the opposite in that “you just work with what you got… I always felt I was scraping the bottom of the barrel just trying to get a song together. I never had the sense I was standing in front of a buffet table with a multitude of choices.”

Cohen wouldn’t be drawn on hidden meanings. “Let’s not examine the nature of images that seem to have their own validity. If you look too deeply into things you get into a state of paralysis.” Throughout, Cohen appeared reluctant to dissect his work in front of a bunch of critics and fell back on logic as well as humor to deflect things, putting a metaphorical arm around Cocker, his fellow songwriter. “We’ve got to be very careful analysing these sacred mechanics because somebody will throw a monkey wrench into the thing and we’ll never write a line again.” He added that “now and then something invites you to animate it, which you try and do with grace and illumination.”

Cocker asked about the album title, Old Ideas, and the gestation of the record. “You know, I don’t have that many ideas,” Cohen batted back. The sacred and the carnal may be bedfellows in Cohen’s work but the songwriter would not say whether it was God or man who should be the penitent one. He added: “I never figured that one out.” Cohen was more prosaic when acknowledging the PEN New England award for literary excellence in song lyrics. “The thing I liked about this award was that I’m sharing it with Chuck Berry. Roll over Beethoven and tell Tchaikovsky the news. I’d have loved to have written that line.” 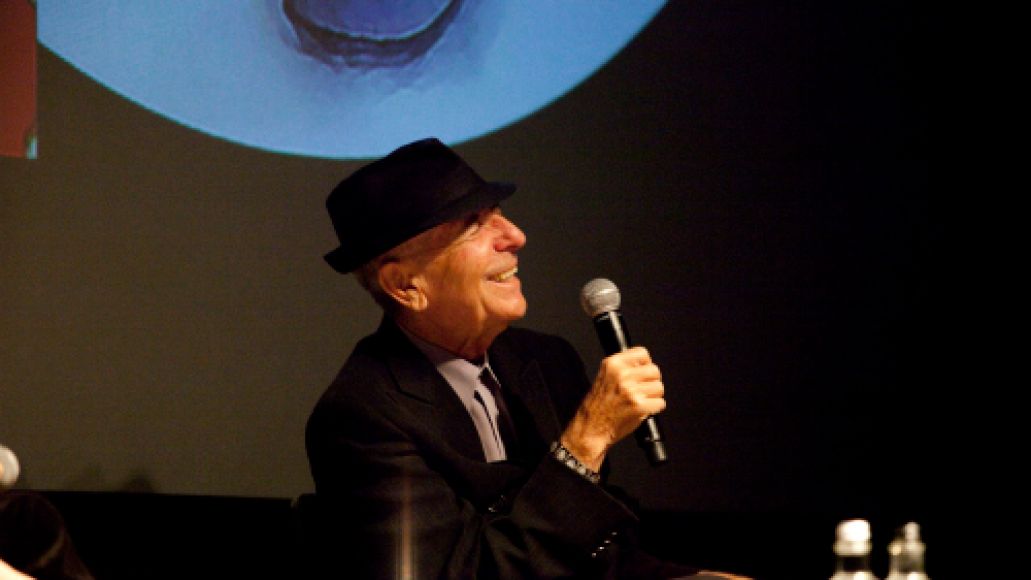 Questions from the floor followed. Recalling his last tour, a 247-date marathon over two years following a 15 year break, the artist claimed the experience invigorated and illuminated him. Wryly he compared himself to a latter days Ronald Reagan: “he remembered he’d had a good role. He’d played the president in a movie and I felt somewhat that I had been a singer.” Being back on the road though redeemed this self put-down. He coyly played down the possibility of a duet with Rufus Wainwright (father of a Cohen grandchild): “he can keep a tune and that puts me at a disadvantage.”

Perhaps the most precious moment arrived when Cohen was asked where the light came into “The Darkness”, quoting that enigmatic line from 1992 song, “Anthem”: “there is a crack in everything/that’s how the light gets in.” “You got me stumped there” was Cohen’s droll retort. Cocker stepped in and prompted Cohen to open up. “It’s just the song that allows the light to come in. It’s the position of the man standing up in the face of something that is irrevocable and unyielding and singing about it. It’s the sort of position Zorba the Greek took; that when things get really bad, you just raise your glass and stamp your feet and do a little jig and that’s about all you can do.”

Maybe it really is that simple and there’s no need to break into discussion groups to pull apart lyrics once Old Ideas hits the streets.

Leonard Cohen, Jarvis Cocker, and an Audience at London's May Fair Hotel