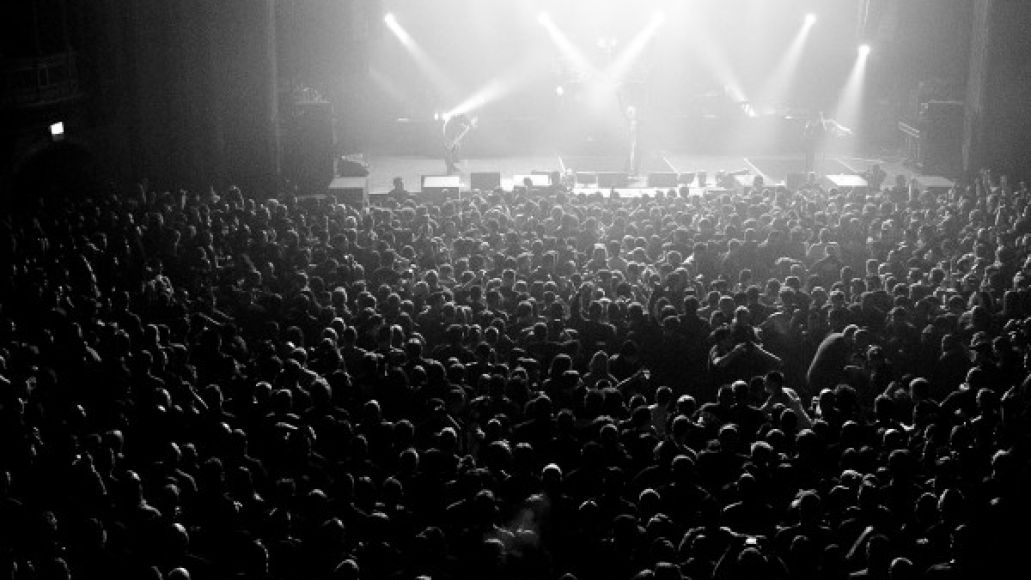 I bet I was one of the few people at this show who felt genuinely let down. The prerequisites to feeling as though Jonathan Davis, Fieldy, Munky and Ray Luzier let you down are storied and kind of depressing. But why am I here in the first place?

Attendees at a Korn show (often stylized as KoRn when you can’t find a backwards R lying around) in 2012 are a balance of Korn-for-lifers and new recruits. It’s not quite like a New York Dolls/Poison show, full of that “Oh, honey, we should totally go– that will be so fun!” sentiment. Taking in large cross-sections of the crowd, the theater consisted of Korn absolutists and apologists, fan club members (Lil’ Kernals, as I imagine the collective to be named), Skrillex recruits whose favorite lyric of 2011 was easily, “Shut the fuck up, get up!”, nostalgia-divers still listening to nu-metal who all know a guy that does tattoos, and people who knew and genuinely enjoyed about three and a half songs by them.

I fell into the last group, and I wanted to hear “Got The Life”, “Blind”, “Get Up!”, and like half of “Freak On A Leash” and just roll with the thousands of people and ride those dark, hateful vibes. Mind, this is the Congress Theater, where fidelity is a distant second to getting blitzed with some bros and raging at a show. I’m there, I’m totally with you — I’m not here to overanalyze things. The only thing Korn had to do to make me leave happy was to just show up with some energy and not do or say anything offensive to make me change my mind about the three and half songs that I really liked. 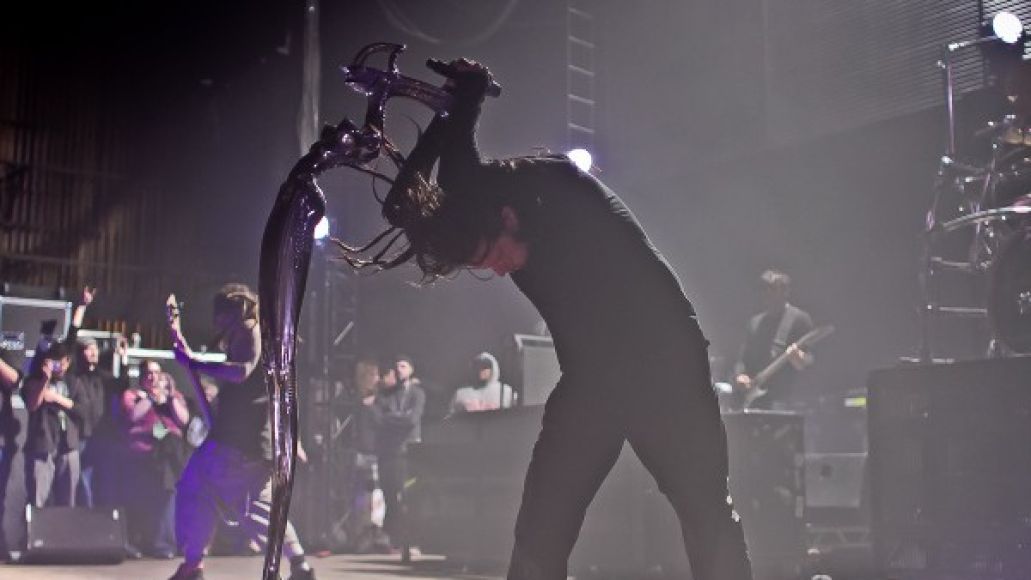 The show was billed as Korn, Kill The Noise, and J-Devil. Korn I totally understood– they were the headliners! Kill The Noise, the wubstepper DJ who worked with Korn on their 2011 album Path of Totality totally made sense, but who was J-Devil? Some new band getting the sick cosign from Korn? J-Devil…J.D. Oh, no. Was this a Jonathon Davis DJ set? Alas, it was indeed Jonathon Davis playing “original” cuts on a laptop while hype-manning the crowd. It was exactly like this, only worse because it opened with this exact clip that, through some bunk-ass logic, attempts to explain how Barack Obama is Hebrew for Satan. Politics aside, really, J-Devil? You’re gonna kick off your dubstep inspired dark-house 130bpm #pressplay set with some pre-recorded political propaganda?

I moved past that but quick, because getting hung up on whatever the fuck Jonathan Davis’ politics are about will only work against my dream of enjoying three and a half Korn songs live. But the “alter-ego” DJ started this bad trend with J.D.: He acted like this was the first time he’s ever heard a dubstep beat. When that obligatory triplet happened, J.D. would start to play air-drums to it. This macho posturing and pantomime that was so ingratiating on the Kill The Noise set  transferred over to the Korn set during the “New Korn” segment that featured all that metal dubstep found on Path to Totality. Can you imagine James Hetfield of Metallica (who were the toast of the evening, memorialized by a little performance of “One” in Korn’s set and not one but two dubstep remixes during Kill The Noise’s set) miming Lars Ulrich’s drum fills all the time? 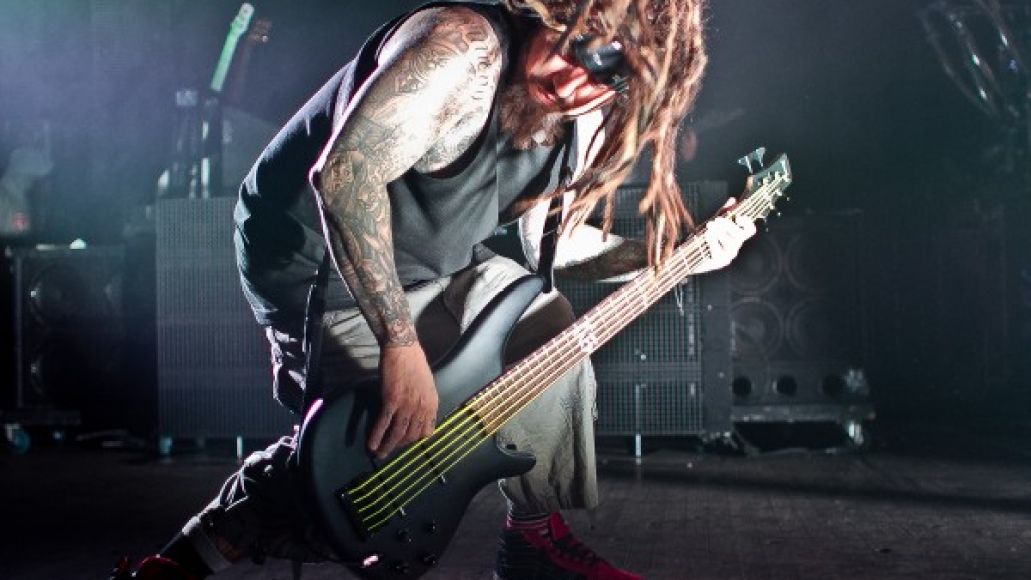 But Korn did have some things going for them. They sound great as a live band, due in no small part to the two additional touring band members backing the four-piece up. J.D.’s voice sounded great — his aggressive singing on songs like “Falling Away From Me” didn’t age a bit, and he’s still got that thrash-metal scream down pat. It turns out, however , that J.D.’s real singing voice — the one he presumably used at karaoke when he was younger — sounds nothing like the one he uses on “Freak on a Leash”, for example. This became clear when J.D. would amp up the crowd with ye olde epithets of crowd amping and he sounded like a normal dude instead of a Marilyn Manson copy. I’m not sure how I never put together that he was affecting his voice to sound mall-rock creepy and tortured, but the whole allure of Korn, which was dubious and precarious at the onset, was all but shattered right then and there.

And that kind of colored the rest of the show for me, as he continued to lead the party-hard crowd in getting hands up and two separate times tried to get everyone to sway their arms back and forth. One of these times was during a cover of all three parts of that Pink Floyd rarity “Another Brick In The Wall” plus “Goodbye Cruel World”. Korn doesn’t seem like a band anymore but rather a hose of primary-color emotions and music that a lot of people looked like they were absorbing for super powers.  Where J.D. was once a voice worth following, he’s now more of a pied piper, an image all to easy to drum up when he brought out bagpipes for the introduction to “Shoots and Ladders”. 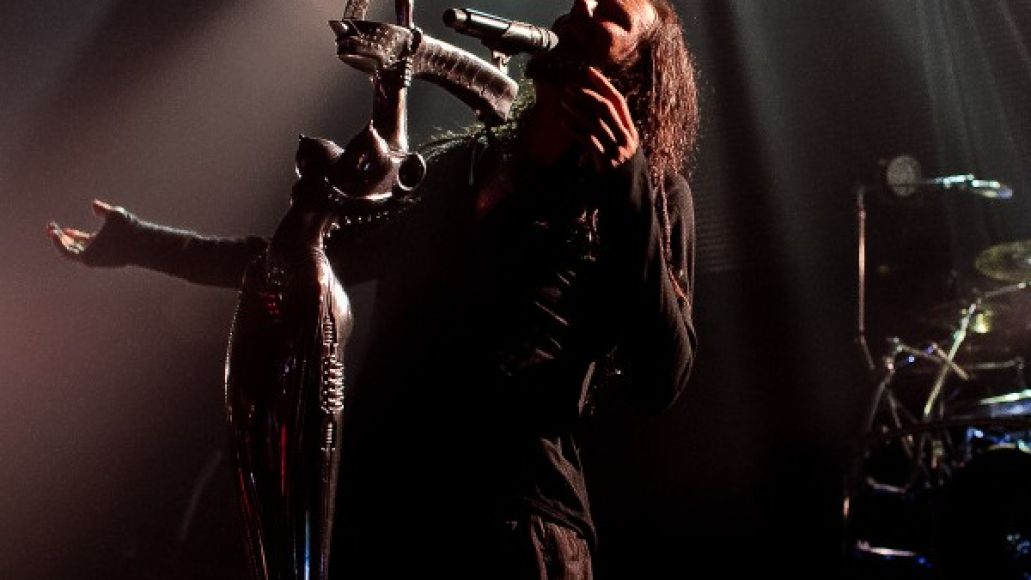 I’m positive most of the crowd did not feel how I felt, however, and that was a really great thing about the show. When J.D. finally sang “Are you ready?!” in the encore, watching the entire floor of The Congress lose its business was great. Each half-full cup of beer flung into the air was a singular moment of further commitment to the concert from a fan. A real Korn flag flew in the audience, and eager fans waited longer that I’d wait for anything to get post-show autographs and setlists. They were the real die-hard fans, to whom Korn still means everything. It was kind of depressing to be officially outside of that group, unable to just “shut the fuck up, get up!’, but after this all-too-staged Korn retrospective of past and present material, they officially mean just about nothing to me now. Corn: as plain it comes.

Setlist:
Predictable
Lies
No Place to Hide
Helmet in the Bush
Narcissistic Cannibal
Chaos Lives in Everything
My Wall
Get Up!
Way Too Far
Here to Stay
Freak on a Leash
Falling Away From Me
Another Brick in the Wall Pts. 1, 2, 3 (Pink Floyd cover)
Goodbye Cruel World (Pink Floyd cover)
Encore:
Shoots and Ladders / One (Metallica cover)
Got the Life
Blind