Welcome to our report on on South by Southwest from Austin, TX, where sleep is nominal and foot pain is exponential. We’re giving you the run on bands we really enjoyed every day this week, so check out our blurbs and pictures below for coverage of Tuesday and Wednesday at SXSW including pictures from our CoSigns Party and our official showcase. 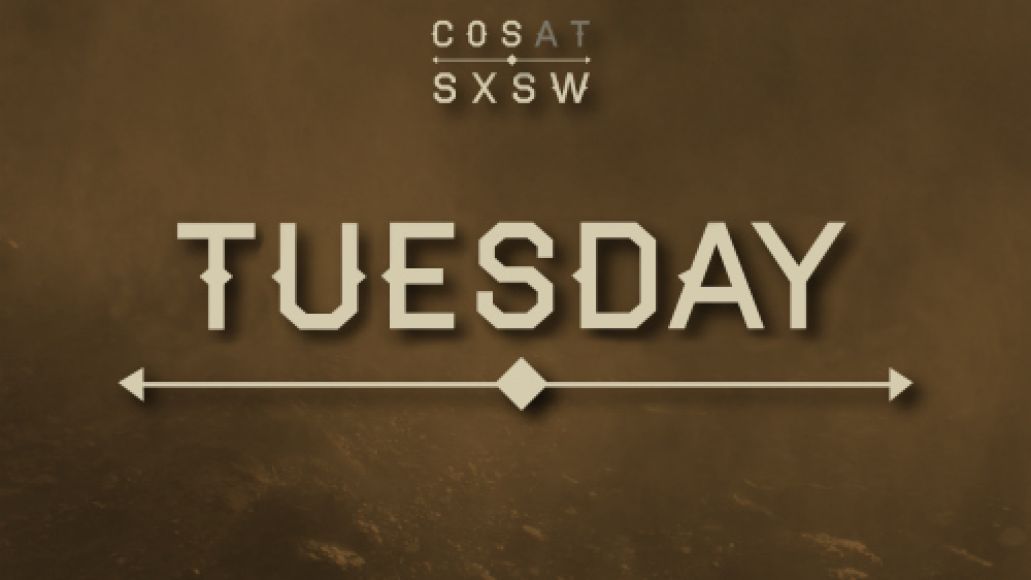 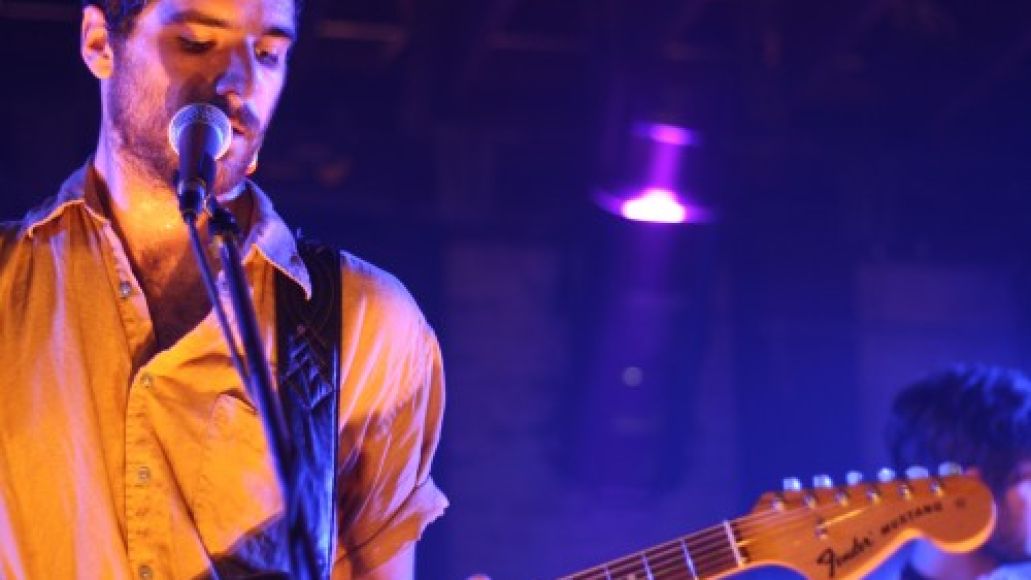 A little nepotism led me to Incan Abraham, who was also playing at Hype Hotel on Tuesday night, when I learned we had a mutual friend. After actually listening to last year’s hypnotic Ancient Vacation, I wanted to see their laissez-faire Local Natives vibe in action. The foursome played with refreshing enthusiasm, layering synthesizers with more organic drums, nesting Teddy Cafaro’s voice—which at times uncannily but also unsurprisingly mimicked Yeasayer’s Chris Keating—in humid polyrhythms. Smoke and low orange and purple lighting added to the totality of the experience, making Incan Abraham an act I would get lost in again. – Harley Brown 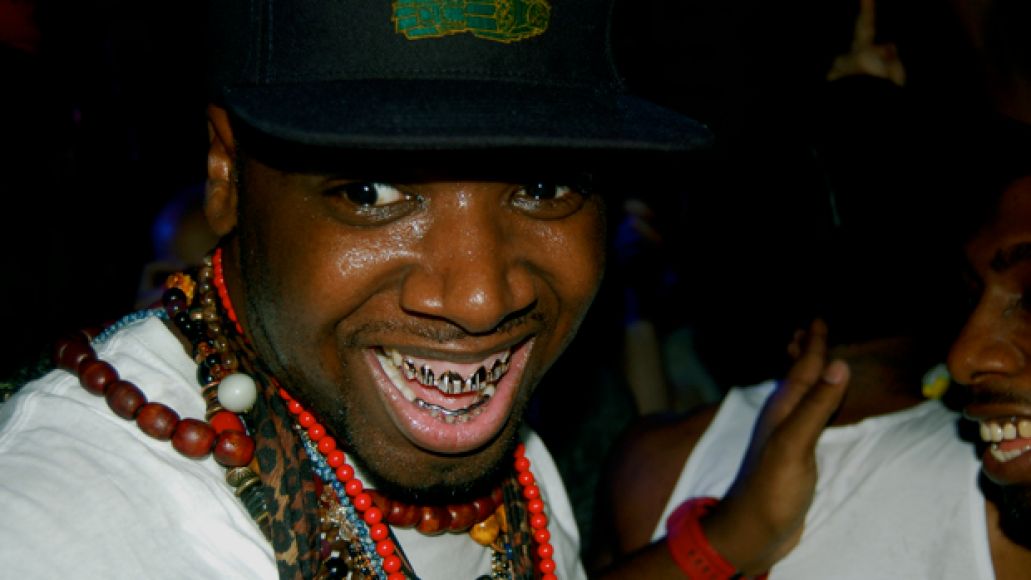 Spittin’ rhymes is one thing, but bringing a party is another beast altogether. Brooklyn’s Mr. Muthafuckin’ eXquire brought both to Pitchfork’s Tuesday showcase at the Mohawk – and then some. After moody electronic sets from Teengirl Fantasy and Schlomo, patrons flocking about the close-pocketed venue sprang to life during the Brooklyn rapper’s set. His crew sprayed bottle after bottle of water, invited more members on-stage, seemingly laughed together at inside jokes, and jumped to and from the stage, all while attendees held up their hands and screamed along to random verses, mostly from tracks off last year’s Lost in Translation mixtape.”What’s yo’ favorite part of the pussy,” he asked a dazed white spectator, caught in the madness. He didn’t wait too long for answer, screaming back: “It’s all good!” When he dove into the crowd towards the end, his crew joined along, and, well, it felt less hip-hop and far more punk rock. -Michael Roffman 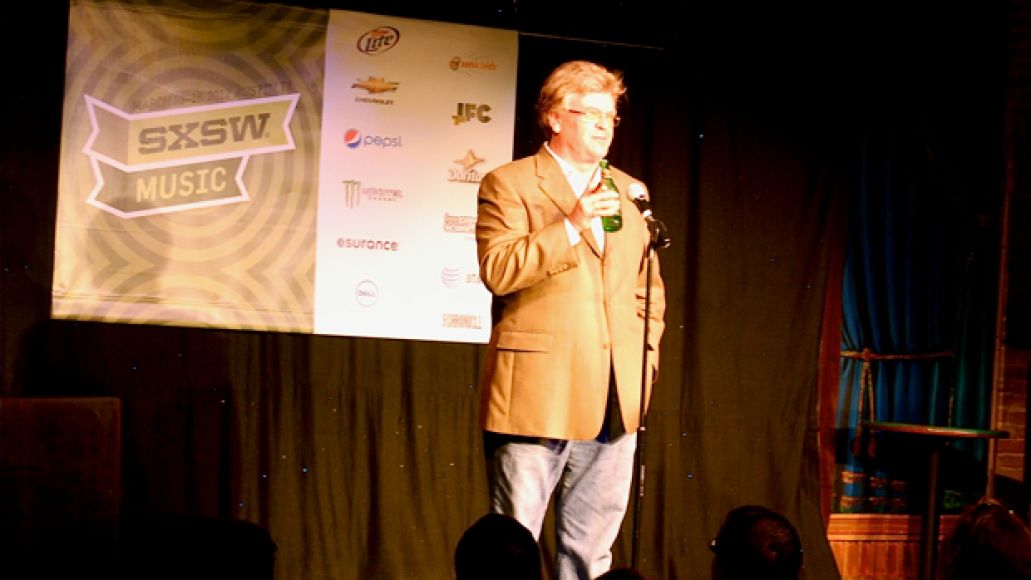 Tucked away in the cubby that is Esther’s Follies, Upright Citizens Brigade hosted one hell of a lineup for well over two hours, featuring Chris Gethard, Eliza Skinner, Gabe Liedman, Kyle Kinane, Jenny Slate, Joe Wengert, Ron White, and Pete Holmes. From top to bottom it was a stellar night, though some highlights included: Gethard’s quirky brand of hyper-literate, pseudo-stonerish afterthoughts, which involved a digression on his mother being raped by Willem Dafoe (“I am the Green Goblin hate baby!”) and the choice of commercials during Biography’s I Survived series; Skinner’s manic yet whimsical analysis of cat ladies vs. dog guys; Kinane’s Carlin-like brand of crude humor, specifically his thoughts on being 35 and finally living by himself; and Pete Holmes, who told the best off-hand joke involving BBQ that Austin, TX will ever receive.

White’s appearance was a surprise, and that was sort of the delight of it all, though his cutting lines are always witty in the moment. Slate’s shocker-fueled routine, alongside Liedman, was commendable, though she belongs on film rather than the stage. (She also is Gilda Radner resurrected.) Holmes, however, essentially shanked everyone’s sides with his stream-of-consciousness-styled comedy. In addition to his thoughts on Austin’s eateries, Holmes skipped to and from several topics, all of which included his thoughts on wanting to fuck/be Ryan Gosling, wearing a boot for six months, his rogue’s gallery of celebrity doppelgÃ¤ngers (e.g. David Duchovny, fat Val Kilmer), and a random old joke about Ruby Tuesday. “I’m like the ol’ crotchety neighbor of this entire festival,” he stated. Hardly. He’s just the funniest. -Michael Roffman 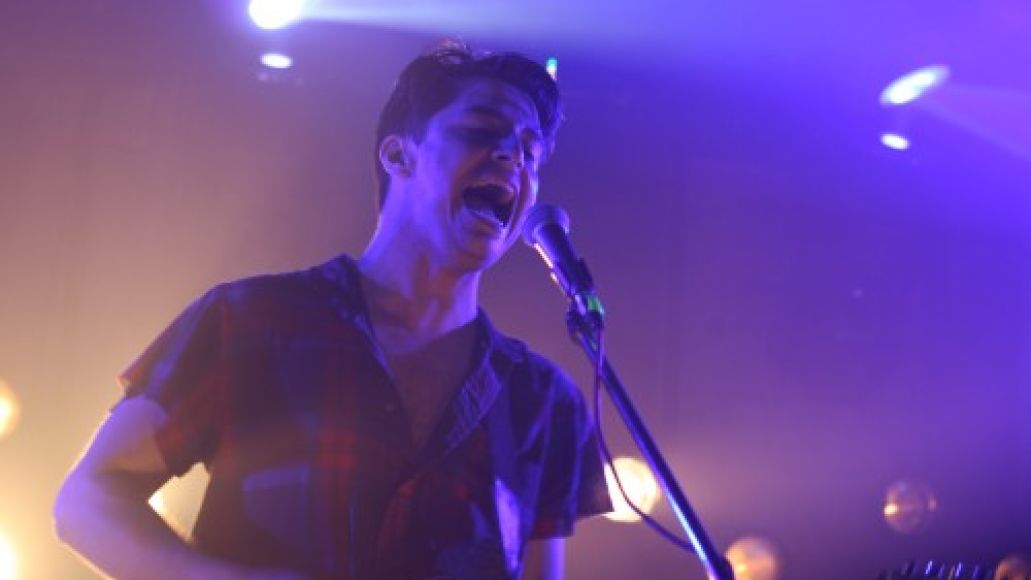 When I noticed that the “Special Guest” headlining The Syndicate’s Conflict of Interest-curated Hype Hotel was from Long Beach, CA, I knew it was Delta Spirit. Even though I’ve seen them before and I will definitely see them again, I wanted to be among the first audiences to see them perform Delta Spirit at SXSW. As usual, they didn’t disappoint: Matt Vasquez and co. blasted through “Bushwick Blues” at warp speed, and new songs like “Empty House” and “Money Saves”, backed by a wall of hot, flashing lightbulbs. Vasquez throws his back and neck veins into every performance, but being back onstage seemed to be a homecoming of sorts. He got visibly choked up at several points and doubled over with emotion (or exhaustion) after encoring with “California”, eschewing the audience’s request for one more song. – Harley Brown