Do you remember rock ‘n’ roll? The kind of rock, mostly the ostentatious stuff from the ‘70s and ‘80s, that celebrated the best of youthful vigor? If you believe Paul Sprangers, lead singer and lyricist of Philadelphia rock quartet Free Energy and its feel-good rock, it’s the kind of stuff that makes you feel alive.

In an interview with Consequence of Sound’s Paul de Revere, Sprangers talked about how Free Energy’s brand of rock is out of place in today’s “post-Nirvana” rock landscape, he called it– one focused mostly on angst, navel gazing and tired music formulas– but that in itself also makes it totally essential.

“When [Free Energy guitarist] Scott [Wells] and I collaborate on music, that’s what comes out,” Sprangers said, “that triumphant energy and sound. I think both of us on our own create music that’s melodic. But for some reason, when we make music, it’s drawn toward this anthemic, righteous area… We’re able to go deeper and deeper into the canon of rock and embrace things that are [now considered] cheesy.”

He lists off a litany of cornball influences: Steve Winwood, Billy Ocean and Shania Twain and her ex-husband, producer Robert John “Mutt” Lange (who produced many a fist-pumping, butt-rock single in his day) among them.

“A lot of this stuff conventionally is considered cheesy only because it was so big and shoved down everyone’s throats,” Sprangers said, “that you kind of get this [unfavorable] reaction culturally… But I think given enough time, you look back and go, ‘Holy shit, this stuff has a lot of truth in it.’”

So maybe it makes sense that Love Sign, the band’s forthcoming follow up to its 2010 debut full length Stuck on Nothing, hasn’t yet found a proper label for release. Sprangers said Free Energy parted ways amicably with its previous label, DFA Records, and that the band was looking for a new direction. He wouldn’t speak to ongoing label talks, but Sprangers doesn’t seem deterred creatively or ethically from the same idea present on Stuck on Nothing: earnest, simple rock ‘n’ roll. 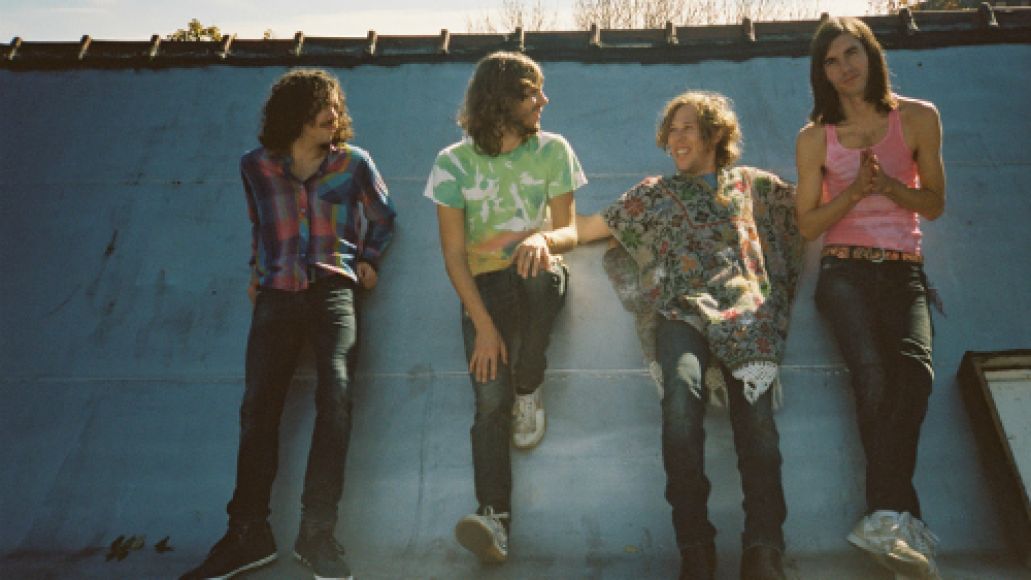 What I liked about Stuck on Nothing was that if it weren’t for the modern production sound and DFA putting it out, you’d have no idea it wasn’t a genuine article from the ’70s. It was that true of a tribute to that rock sound. With Love Sign, did you expand your boundaries out a bit more musically?

Yeah, generally. I look at it more as a continuous refining of ideas. Any aesthetic growth is more like a refining of our process and being able to more clearly articulate ideas, lyrically or in a guitar riff. [On Love Sign], the drums are much more clearly articulated even than the last record. That comes with confidence and experience, I think. Certainly, the dance songs we’ve done on this record are dancier than anything we’ve ever done. There’s a song that sounds like a Go-Gos pop song. Everything is much more clear and amplified. The rock songs are dumber and bigger. Like, fuck it, we have nothing to lose. If it’s going to be big and dumb, it should be the biggest and dumbest it ever could be.

Actually, that was an early working title for the record, Dumb as Fuck.

I don’t think they are. It’s still kind of up in the air.

Are there any labels you’re looking at?

I don’t know how much I should say. We’re talking to a few. I’m not positive [our style] made sense on DFA. I mean it did, because the guys there really care about it. But for the world, it wasn’t a perfect fit. Maybe we need to be on a label that has more of a foot in the rock world.

One of the things I noticed in Love Sign’s single “Electric Fever” that was different from the songs on Stuck on Nothing is that it seems like you’re pulling from ’70s funk and disco as much as you are from ’70s rock ‘n’ roll.

Yeah, with the chicken-scratch guitar. We’ve been listening to ‘80s stuff like Graceland or Peter Gabriel, guys that are referencing world music but drawing it through pop. A lot of that has been inspiring to us. It’s all very dirty and woven-in. Also, like mid-career [Rolling] Stones off Some Girls, where it’s really funky. 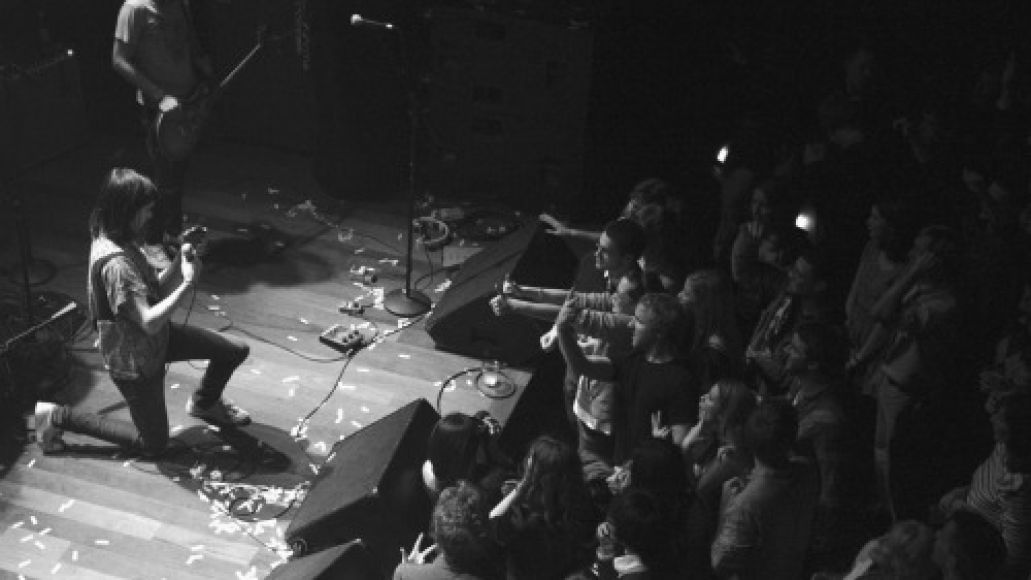 That’s interesting because most of the music you named up until world music and The Stones were American influences, and I think you guys are a distinctly American-sounding rock band, really positive and bright with an independent spirit.

Don’t you think it’s weird that there isn’t more music like that? [Tom] Petty is a huge influence on this record, too. He wrote some of the catchiest songs in the canon of American rock. I wonder why more people don’t try to emulate it or use it as a starting point, at the very least. I tend to agree with a lot of people who say “Rock is dead,” because it is, you know?

It occurred to me listening to your music that the last band to take a full inventory of American rock like you guys have was The Hold Steady. I think a lot of what you guys do is like that band but looking more on the bright side of things.

I know those guys and I love them. But a lot of Hold Steady is like, as [singer/guitarist] Craig [Finn] has said, admittedly, “bar rock.” A lot of times it’s too generic for me. They do take inventory of American rock but in this way that’s slightly less inspired than what I want to hear. I’m fine with saying that [with our band] the riffs are derivative and that it sounds like stuff that’s come before it. But the difference is that there’s so much love and care put into it. It doesn’t matter what the music is, I think when you have that passion, you’re going to have some degree of success in what you’re making.

I kinda like the idea that rock is dead because I can prove the point that when you put love and care into something– even if it’s a dead, shitty form where fuckin’ Nickelback or whatever is considered rock– it can be resurrected.