When I first heard Andrew W.K.’s debut album, I Get Wet, back in 2001, I was completely skeptical and turned off by what I perceived to be a schlocky rock record. I disregarded all my friends that were pumping their fists in enjoyment. It wasn’t until I actually gave it a serious listen a few years later that I understood what was going on. Andrew W.K. wasn’t here to change the face of music. He wasn’t here to write intricate songs that critics would praise for their complex structure. He was here to make you forget about your troubles and the things that weighed you down in your day-to-day life. He was preaching from a pulpit of enjoying the life you have and the wonderful things you’re given.

I saw him live the first time when he toured for his sophomore album, 2006’s The Wolf, which focused more on his message and less on his parties. At that show, I witnessed a man who cared deeply for his fans and took every opportunity he could to show that he too enjoyed his life and the gifts his fans gave him. My opinion of Andrew W.K. and his music was forever changed by that show, and ever since I have been a worshiper at the Church of W.K..

In recent years, Andrew W.K. hasn’t released much new material (due to contract issues) and has instead spent his time doing fun TV shows for kids, appearing on news programs, releasing a somewhat experimental piano album, and being a motivational speaker. Now he’s back on the road with his old band to perform the entirety of his debut album for fans across the country. On Sunday night, he stopped in at Chicago’s Riviera Theatre to once again unleash his feel-good music. 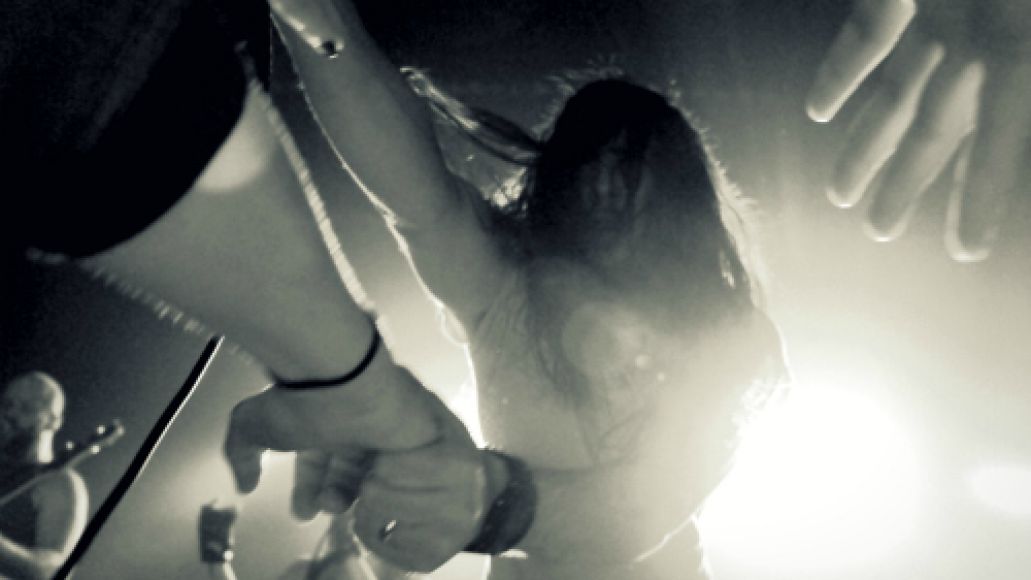 After a quick, energetic set of frantic rock from opener Math: the Band, a large cutout of the now iconic album cover of I Get Wet was lowered into place at the back of the stage. An announcer came over the loud speaker and asked the crowd, “Are you ready to party?!,” which was met with a booming scream from the nearly sold-out crowd. The band—which consisted of four guitar players, a bassist, and a drummer with a three-bass drum kit—came onstage and began the opening guitar line of I Get Wet opener “It’s Time to Party”. Andrew W.K. then came bounding out with his beautiful wife Cherie Lily to give an enthusiastic, “Hello Chicago!” before blasting into the song.

All the songs from I Get Wet sounded tight and fresh, though at times a tad slower. W.K. still had a strong energy and enthusiasm throughout the show. He’s a showman and in between each song played some kind of improvised song on his keyboard that was accompanied by what really amounts to a piece of performance art. He would dance, do odd facial expressions, pantomime things, or perform some sort of chant with the crowd. At times it slowed things down a bit too much, but mostly it was highly entertaining.

In between a few songs, he also noted that his wife grew up in the Chicagoland area, so this was a kind of hometown show for them. W.K. would point out her family sitting in the balcony boxes and say how happy they were to be “back home.” He changed the lyrics to “I Love NYC” to “I Love Illinois” much to the enjoyment of the rowdy crowd. 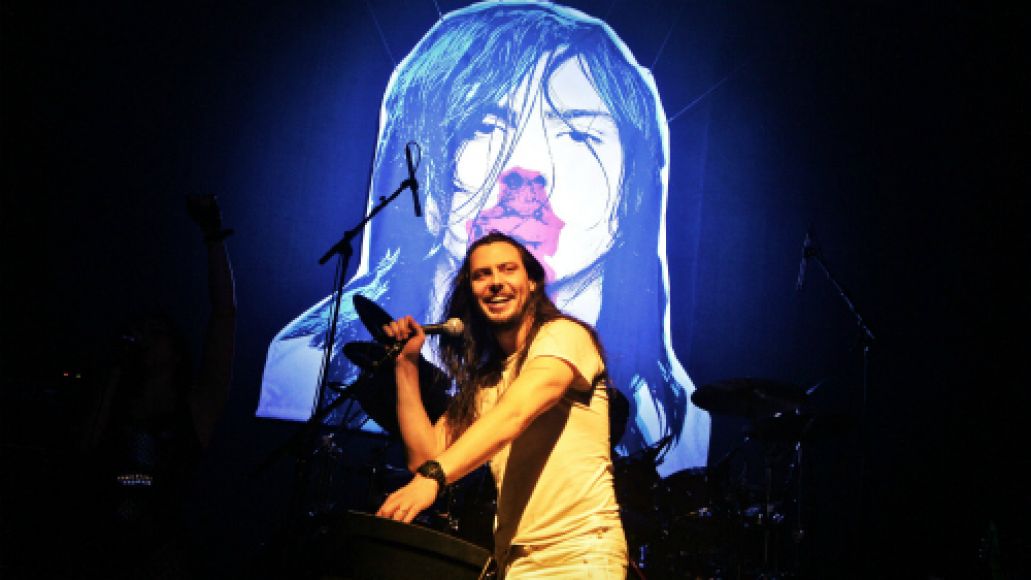 After the band finished the songs on the album, they came out to do an encore of songs from The Wolf and his recent American release, Close Calls with Brick Walls. This is when the vibe of the show switched to something more akin to his motivational speeches. Before playing The Wolf opener “Victory Strikes Again”, he spoke to the crowd about “cherishing the joy” they we were feeling right then and carrying it with them always. He wanted all of us to “appreciate the power of music” and let it take away all the things that burdened us. We all listened and abided.

The peak of the speeches came when they were coupled with Wolf tracks “Never Let Down” and “Totally Stupid”, the latter of which contains some of W.K.’s most profound, philosophical lyrics. The crowd was filled with pumping fists, shouting voices, crowd surfers, hugs, and smiles. We were all now worshiping at the altar of Andrew W.K.. He wasn’t just a guy singing about partying until you puked. He was a guy who didn’t want you to wallow in self-pity and sadness, or stress yourself out over insignificant problems. At the end of it all, he was a guy with a completely optimistic and infectious attitude who cared for and believed in us and wanted us to do the same. That’s as reassuring a feeling as you can get from a rock show—one that will stick with all of us the morning after.

Setlist:
It’s Time to Party
Party Hard
Girls Own Love
Ready to Die
Take It Off
I Love NYC
She Is Beautiful
Party til You Puke
Fun Night
Got to Do It
I Get Wet
Don’t Stop Living in the Red
Encore:
Victory Strikes Again
Long Live the Party
Never Let Down
Totally Stupid
The Moving Room
Headband
Encore 2:
We Want Fun
—