At last year’s Ecstatic Music Festival, Dan Deacon created a bit of a stir when, for 10 minutes, the audience listened to the sound of soda draining from microphoned two-liter bottles. Things got uncomfortable. Grievances were audibly uttered. Deacon likes to stretch things out, to see how far they’ll go, to make people a little uncomfortable. But his aim is true: He does it for fun, and he hopes you’ll see the humor and absurdity of his twisted ideas and find some joy in them.

Deacon was back for more humor and absurdity but much less draining soda at this year’s Ecstatic Music Festival, writing a nearly hour-long piece for a more standard chamber ensemble than last year’s all-percussion soiree with So Percussion. Using the combined forces of the eclectic NOW Ensemble (piano, electric guitar, clarinets, flutes, and double bass), the Calder String Quartet, and himself on electronics and live processing, Deacon presented the world premiere of his latest effort in the world of classical music, An Opal Toad with Obsidian Eyes.

Deacon revealed a few of his tricks in a pre-performance chat with WNYC’s John Schaefer, such as the use of Auto-Tune as a pitch-quantizing device, and the use of a click track as a pulse in the second part of the work (he invoked both Steve Reich and Terry Riley as possible influences in this regard). At times, the sound of those two great minimalists was noticeable, especially in the second section, “Fleece Needs”, which used a quintessentially Reichian timbre. With the echoing, wood block sound of the click track grounding the music in even rhythms, guitar, and piano, the string quartet provided a rhythmic backdrop, while bass, flute, and clarinet played long tones unfolding in waves of intensity over the chugging background. It brought to mind my favorite moments of Music for 18 Musicians or the Double Sextet. 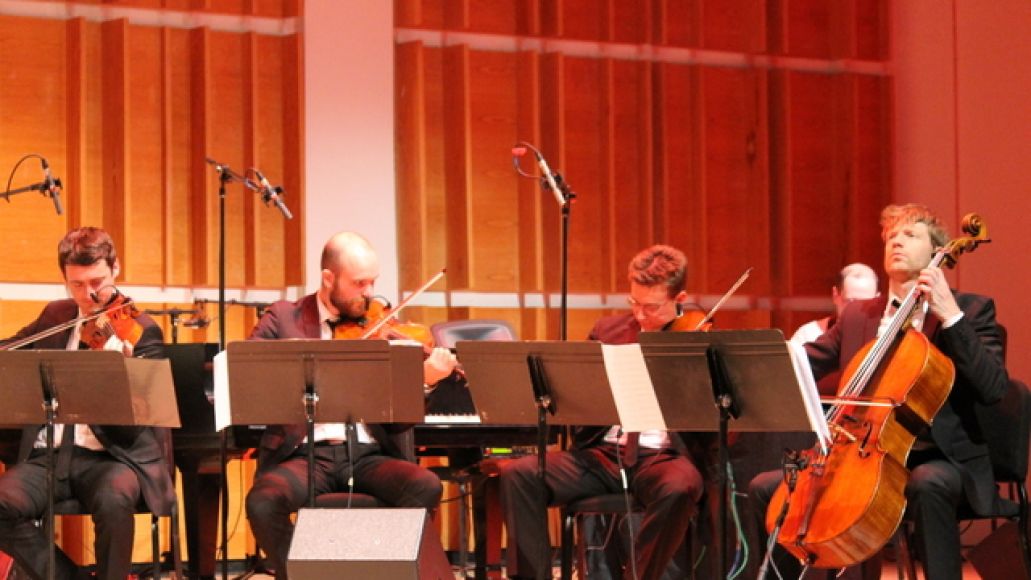 In fact, Deacon’s piece was, in many ways, much more conventional than his drum-heavy foray into classical composition last year, Ghostbuster Cook: Origin of the Riddler. Using more standard modern instrumentation, and borrowing heavily from minimalism, Deacon seems happy to explore this very 20th century sound world using his own 21st century electronic timbres and harmonic language. The opening movement, “Mirkwood Dance”, was the most successful, based entirely on layering sine wave drones. These waves and the sounds of the instruments were processed through Auto-Tune devices to create a lush, consonant wash of rock-friendly harmonies. The “dance” unfolded as one huge crescendo of dynamics, texture, and pitch, as the unmetered, amorphous blob of sound grew and grew.

The third section, “Caddyshack Batman”, utilized a player piano device that allowed Deacon to turn a grand piano into a nearly electronic instrument. Recalling the mathematically precise and impossible-for-humans player piano works of Conlon Nancarrow, Deacon’s piano erupted in frenetic bursts, playing rapid notes on at least 30-40 keys, creating a shimmering and absurd sound that his fans will instantly recognize from albums like Spiderman of the Rings and Bromst. 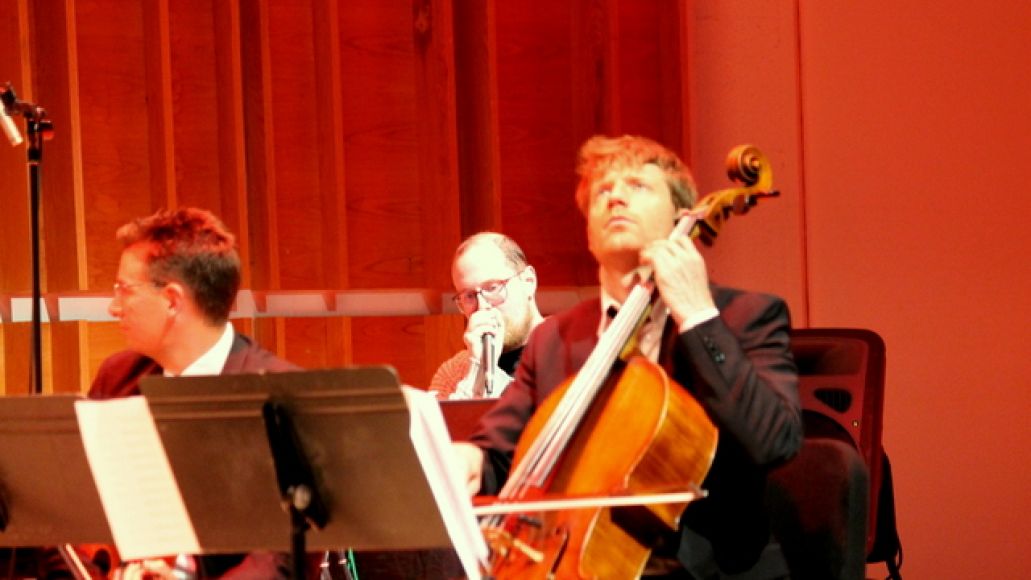 What Deacon perhaps needs to add to his classical compositions is the act of self-editing or restraint. Without a sweaty mass of dancers feeding off his repeating music, the piece seemed to remain stuck in a single, static harmonic and rhythmic block for too long. There were some small changes within these meditative moments, but for a musician as dynamic as Deacon, some additional variety would have been appreciated.

In contrast, the evening began with two works better attuned to a sense of proportion, complementing each other perfectly. The NOW Ensemble played their own guitarist Mark Dancigers’ Cloudbank, which he described as an exploration of the group’s extremely heterogeneous and disjointed timbres. The piece began with light, airy, staccato notes from the players, creating a composite melody that repeated many times. Just as it seemed this section was becoming stubbornly unchanging, the piece switched gears into an expansive flute melody with long, legato tones from the entire group. Flutist Nathalie Joachim soared, her playing building like a mind-blowing guitar solo, passionately bringing the piece to a climax before falling back into the opening sound. 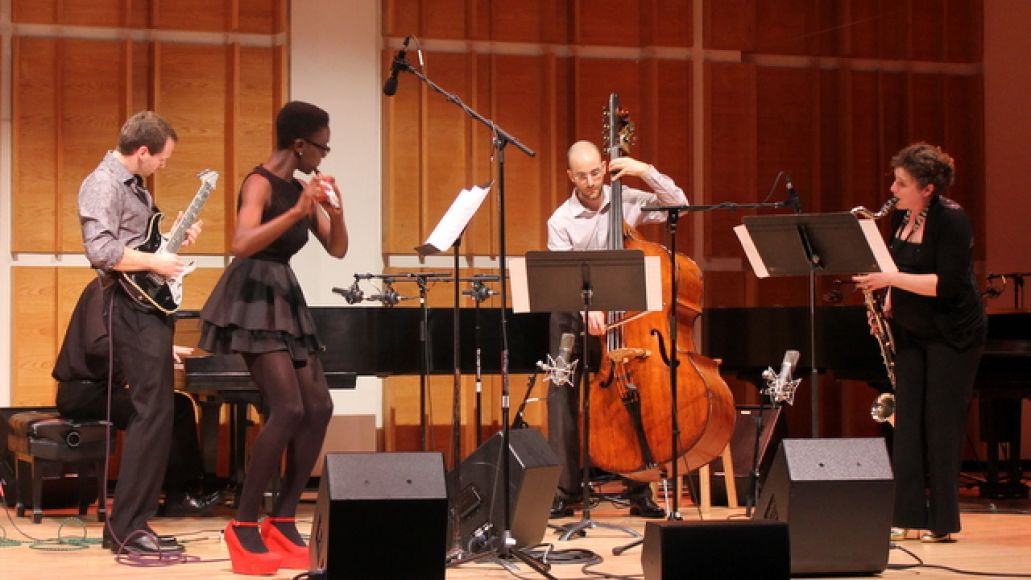 Just as Cloudbank was hopeful, impressionistic, and playful, Daniel Wohl’s Glitch for string quartet and electronics was dark, sinister, and heavy. The four movements explored the concept of a mistake as musical manifestations, and in each movement, there seemed to be some kind of “glitch.” The first movement prepared the audience for Wohl’s sound world: Electronic string-like drones laid a basis for violinist Benjamin Jacobson’s glitch – nervous, twitching melodies and trills. Cellist Eric Byers used a variety of extended techniques, hitting his instrument for percussion and occasionally making glitch-y sounds by scratching his strings.

The entire piece featured many dissonant glissandos, dark tremolos, and heavy-handed bowing that brought out a certain weightiness and severity in the sound. The Calders, who commissioned the work, were outstanding not only in their sound but in their communication and the ease with which they moved between romantic, melodic fragments, minimalist rhythmic pulsating, and Ligeti-esque modern string effects. The final movement was perhaps the most fascinating, as the full sound of pentatonic rock harmonies gave way to muted scratching and finally to a major key apotheosis of consonant arpeggios, building slowly from the depths of each instrument. It had an almost Wagnerian scope, a sense of awe and grandeur that provided a hint of light at the close of such a dark piece.

Listen to the whole performance now via NPR.