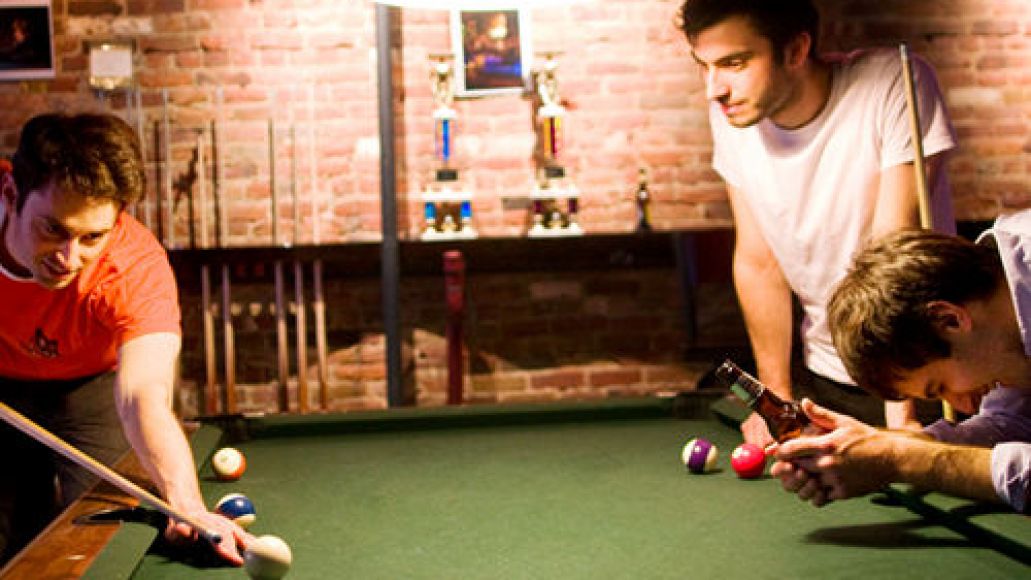 “Somewhere along the drive from Boise to Salt Lake City, we came across a rest stop that had what appeared to be a combination Quiznos-hospital. Our guess is either the Quiznos was attached snack bar-like to the emergency waiting room, or (more likely) the hospital has a fleet of talented surgeons who can bring sandwiches back to life. Here is a list of songs we’ve enjoyed on the road” –Matt Morello, Adam Moerder, and Nick Sylvester of Mr. Dream.

The free-associative liner notes below are mandatory reading. Grab the playlist on Spotify, and stay tuned for some great shots of the band from our SXSW party at CoSigns 2012.

David Bowie – “I’m Afraid of Americans”
This is the song Bowie did with Trent Reznor a few years ago. It gets queued up whenever we cross back into the US from Canada, usually seconds after the border patrol agent hands back our passports, takes off his sunglasses, and says, “Welcome home, boys.”

Brian Eno – “No One Receiving”
Early into our tour, Matt raised the possibility that maybe Brian Eno was full of shit. It seemed possible. We put on those early solo albums and nearly convinced him otherwise, then Eno did one of his nursery rhyme folk type tunes, and we lost Matt forever.

Cloud Nothings – “No Sentiment”
We’re out with these guys right now. You may wonder why we’d listen to this song in the van after hearing it live every night, but the recorded version is the only one where Dylan sounds like he’s singing, “WE STARTED A BLOG!!”

Kathy Diamond – “The Moment”
A lot of our tour van listening is revisiting semi-recent albums, seeing how they hold up, etc. Felix da Housecat’s Devin Dazzle album holds up. This Kathy Diamond record holds up. That one DFA radio mix from 2005 holds up, and also M.I.A.’s Piracy Funds Terrorism. Everything else does not hold up.

Exploding Hearts – “Throwaway Style”
After our show in San Francisco, we had to drive to Portland on the same stretch of I-5 that the Exploding Hearts did when they flipped their van nine years ago. The highway winds up and through a mountain range, and you often can’t see more than 10 feet in front of you because of the fog. We stopped that night in Eugene, thinking we were in the clear, only to learn the next morning that the Hearts had tapped out on the portion from Eugene to Portland–100 or so miles of straight, wide road and sadly one of the easiest legs of the journey. This song holds up.

Rage Against the Machine – “Down Rodeo”
We had to pick up record sleeves from our booking agent in Beverly Hills, whose shop is a block away from Rodeo Drive. It’s been a lifelong dream to roll down Rodeo blasting “Down Rodeo” out the windows, hitting passersby with the shotgun truth of politically conscious rap-rock. Mission accomplished. We also played “Down Rodeo” on Wilshire Blvd, Burnside Ave, and Larimer St in Denver.

Television – “Marquee Moon”
In Vancouver, we had the idea for a concept album called Mark E. Moon. The instrumentals stay the same, but Tom Verlaine is replaced with Mark E. Smith on vocals, and the album now requires an additional 45-minute track at the end to accommodate how far Mark E. Smith falls behind the band. Like, the band is already at the second guitar solo of “Marquee Moon” and Smith’s still seeing no evil-uh.

No Age – “Miner”
We tried to listen to this, but it blended in with the road noise too much.

Atlas Sound – “Shelia”
Late one night, we had the idea for a TGIF-style sitcom in which Bradford Cox is mysteriously turned into a Basset hound named Breadford. “Shelia” would be the theme song. It’s a blend of Freaky Friday and the movie Beethoven, in which an enormous St. Bernard wreaks havoc around his family’s house. Breadford the Dog would have Bradford’s voice and punk attitude, which means every episode he’s eating off the kitchen table and shitting wherever he wants to. The family’s father is played by the lead dude from The National, and he’s not happy about any of this.

Pearl Jam – “Mankind”
This song came on Sirius radio, probably the Pearl Jam station. It’s like The Men but catchy.

Nine Inch Nails – “Only”
We forgot to put this in the Atlas Sound blurb: One major plot arc in “Breadford” is the father (The National dude) slowly being disabused of his bigotry. We see this coming to a tearful head near the middle of season four, when the father catches Breadford reading Jean Genet and screams at Breadford, “Why don’t you like to play fetch and go hunting like the other dogs?”

Gang of Four – “What We All Want”
The token black character in “Breadford” is played by DMX, who is actually a dog that’s been turned into a man but with one hitch: DMX can only bark. Also the lyrics to “Shelia” would be modified to read, “Brea-uhd-ford/ Brea-uh-ah-uh-ah-uh-ah-uh-ah-uhd-ford/ He was a guy but now he’s a dog.”