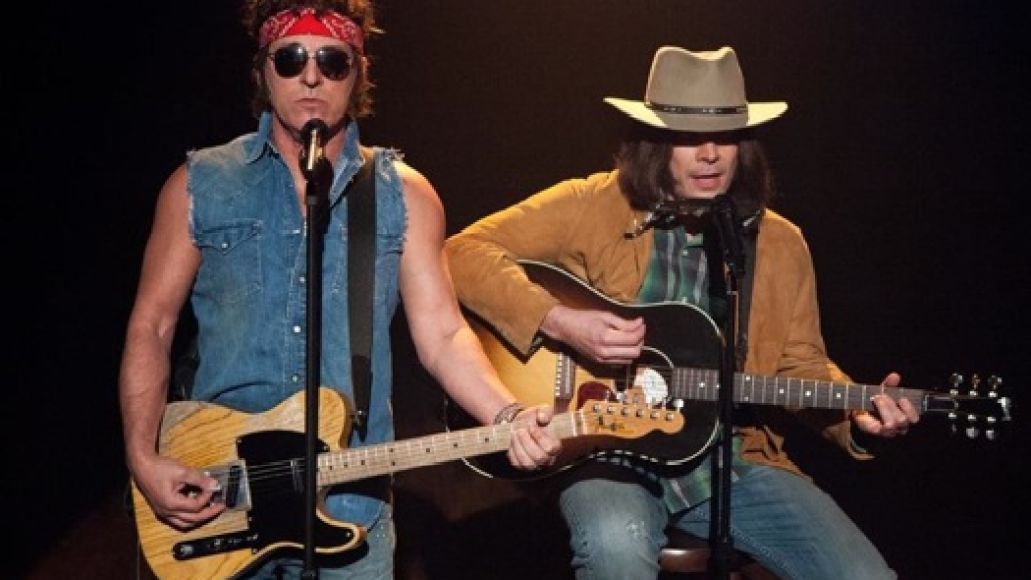 Jimmy Fallon has a pretty remarkable life already, but Friday night had to be extra special. Not only did the episode mark the third anniversary of his late night program, but it was also the final installment in his week–long tribute to Bruce Springsteen, and he got to celebrate with The Boss himself.

Unlike Monday, where he served as only the musical guest, Springsteen was the sole focus of Friday’s episode. Fallon made the most of the opportunity from the onset, kicking off the show with a reprisal of their internet-famous duet as Neil Young and classic Springsteen, this time covering LMFAO’s “Sexy And I Know It”. Springsteen then sat down for a two-segment long interview, which covered topics like the evolution of his clothing style, the one time he got kicked out of Disneyland, and the one time he and the E Strand Band literally destroyed a stadium.

The final 20 minutes were dedicated to a three-song set, including two songs from his new LP Wrecking Ball, “Death to My Hometown” and “Jack of All Trades”, both of which featured a guest appearance from Tom Morello and served as the introduction for the E Street Band’s new saxophonist, Jake Clemons. To close things out, Springsteen and co. played an oldie but goodie, “The E Street Shuffle”, which Fallon prefaced by declaring as “the best musical performance to be televised ever.” It might be the Friday night gin talking, but it’s hard to disagree with him. The seven-minute long performance saw the E Street Band joined by The Roots, Morello, Fallon (who handled cow bell), and a group of 50 or so people taking part in what was likely the first-ever late night pit.

Jimmy Fallon, you just had the best night of your life. Happy birthday.

Via The Audio Perv, replay the whole thing below:

“Death To My Hometown”:

“Jack Of All Trades”: