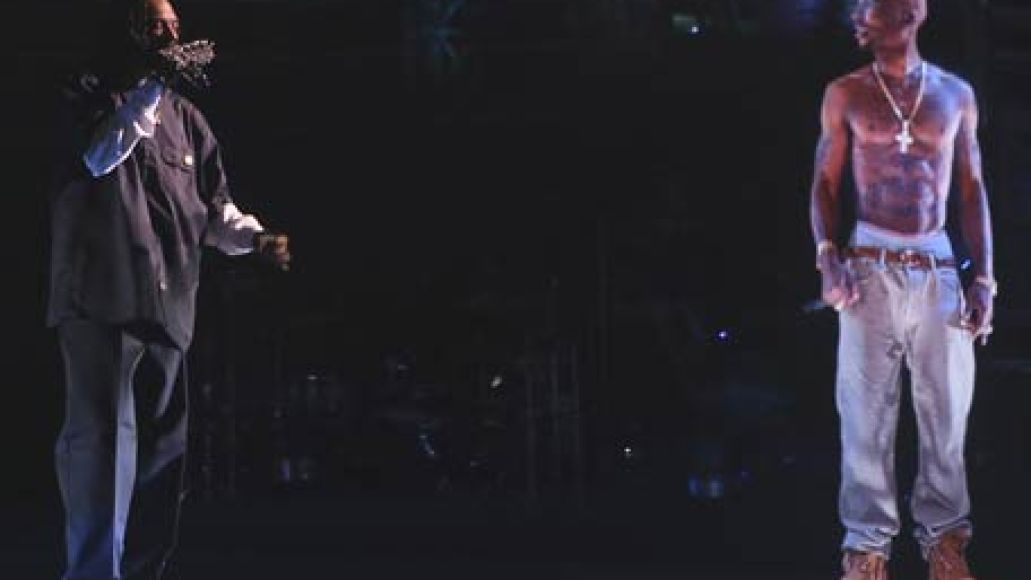 Day three of weekend one of Coachella 2012 is in the books, and you can replay Dr. Dre and Snoop Dogg’s entire headlining performance below. The rumors proved true as the guest-heavy set featured appearances by Eminem, 50 Cent, Kendrick Lamar, Wiz Khalifa, Warren G, and a hologram of Tupac (!).

The career-spanning setlist kicked off with “The Next Episode”, “Gin N Juice”, and “Nuthin’ But A ‘G’ Thang”. Nate Dogg was then remembered with a montage during “Ain’t No Fun (If The Homies Can’t Have None)”, Kendrick Lamar performed his new Dre-aided single “The Recipe”, and Wiz Khalifa teamed up with Snoop on “Young Wild and Free”. Later, 50 Cent came on stage for “What Up Gangsta”, “P.I.M.P”, and “In the Club” and Eminem aided Dr. Dre on “I Need A Doctor” before dishing out his own “Forget About Dre”, and “Till I Collapse”. And what proved to be the evening’s biggest highlight, Tupac’s hologram appeared for “Hail Mary” and “2 of Amerika’z Most Wanted”.

Also streaming in full below, The Weeknd’s Coachella set drew from all three of his mixtapes and also featured a rendition of Drake’s “Crew Love”.

Finally, watch a clip of reunited hardcore band At The Drive-In performing “One Armed Scissor” and “Quarantined”. . Update: You can now watch the full performance.

Coachella video highlights: Dr. Dre and Tupac, At The Drive-In, The Weeknd