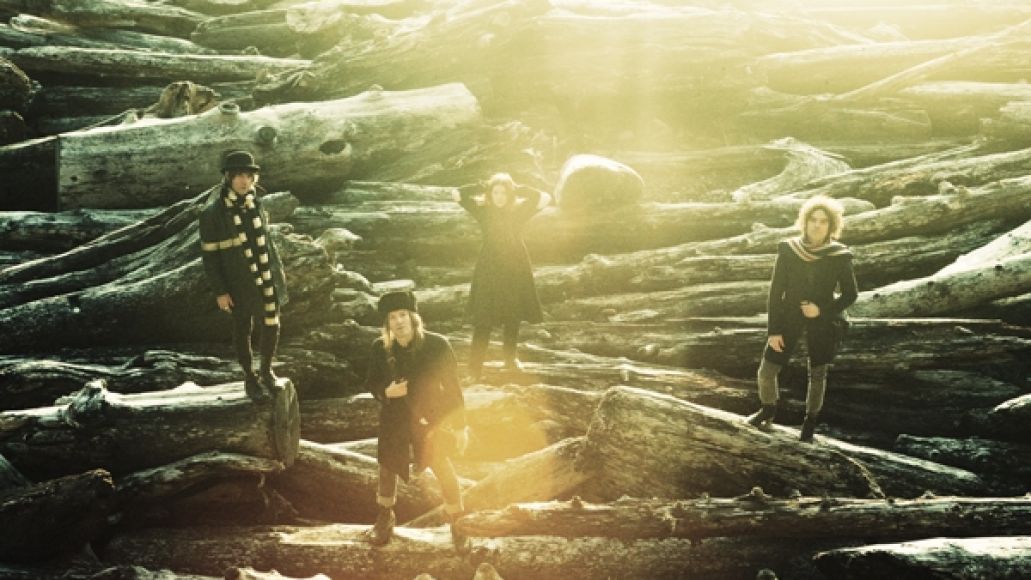 The Dandy Warhols’ latest album, This Machine, has been called the band’s goth-iest by their friends and the grungiest by band front man Courtney Taylor-Taylor. Recently, Consequence of Sound spoke with Taylor-Taylor about the group’s eighth album, working with David J of Love and Rockets, and what it means to have songs on the album written entirely by someone other than himself.

You’ve described your new album, This Machine, as “stripped-down and extremely guitar-centric,” but you’ve also described it as “woody.” What did you mean by that?

Guitars are made of wood, ya know. So are drums. Real drums. I don’t really think about onomatopoeic descriptions, the whys or wherefores. It’s woody, but it’s not soft. It’s not particularly metallic-y, but there is something there. Yeah, it’s a woody, crunchy, dirty thing. It’s beautiful.

On your past albums, you’ve never shied away from revealing your influences, especially with regard to The Velvet Underground and Ride. You never sit still. It seems like you prefer to bounce between sounds and ideas throughout the whole of the album, but I notice there’s more of a commonality between all the songs on this new disc.

You felt like there was a commonality to all the songs on this record?

I thought so. When I was listening to it this morning and just walking around the house… I don’t know, I felt like…

Oh my God… Our records, we generally feel, are kind of all over the place before we put them in the song order. This one we really just sat and looked at each other when they were just a pile of songs in no order. There’s 11 finished, individual tracks. We looked at each other and just went, “What in the fuck are we going to do with this?” We felt that it had never been so… You know, the difference between “Sixteen Tons” and “The Autumn Carnival”, it was like, “Oh my God, what are we going to do?” The thing that does sound alike about them is having Tchad Blake, who’s a very interesting mixer, just left alone to do his thing and mix them.

Maybe that’s what it was, because when I was walking around the house and had it just playing, it just felt like there was some kind of connection between all the songs.

Well, that’s great. There’s a million connections. It’s basically the same four people on every one of them (laughs) and one guy mixing at the end of the thing without anybody in there fucking with him. Which is what I used to do during the mixing process. I’d hire these super-talented mixers, and then I’d sit there and micromanage them. So, this was a great thing. This was also the third record Tchad’s mixed for us.

So, you guys understand each other really well by now.

I think so, yeah.

You mentioned “Autumn Carnival”. That was co-written with David J of Love and Rockets (and formerly of Bauhaus). You said that someone told you that it was your goth-iest, but you thought it was your grungiest.

The record and the song and everything.

That’s what I thought. I am sure the quote was referencing the song, but after I listened to the album, I thought that that applies to the whole album.

Yeah, it’s really dark. Everyone keeps telling us, even dudes from The Warlocks are saying this is a dark, goth-y record. It definitely has this Northwest-y thing to it. I’m really glad we got Hickory Mertsching to do that cover, which is really the Northwest-iest painting that you could possibly ever have. It’s that old style John James Audubon style thing but with a landscape in there, too, not just a log and the owl or whatever. 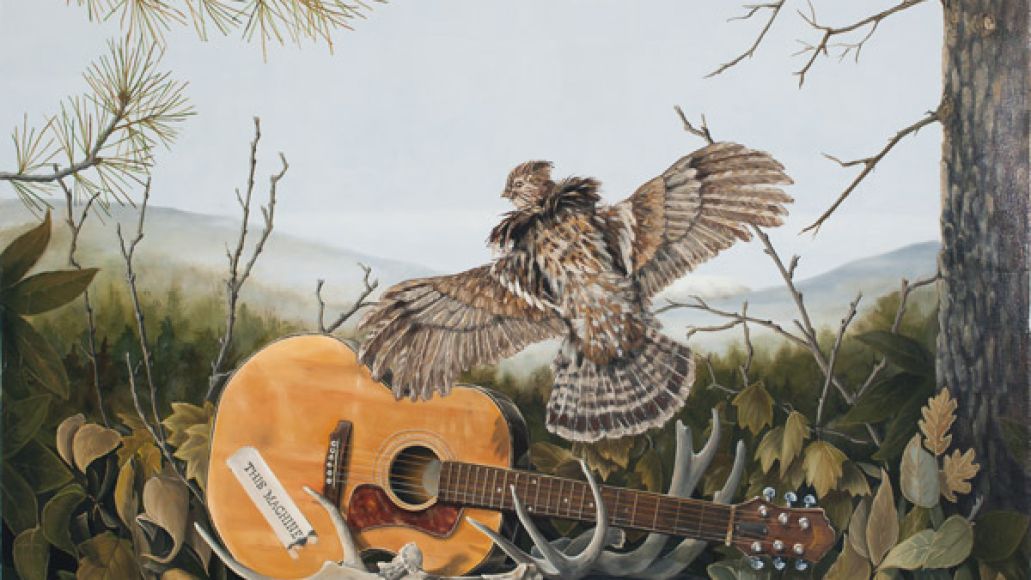 Since you said it was the same four people on this album, I guess David J doesn’t play on the song.

No, no. I’m not a prolific writer; I never have been. Every song I’ve ever written is recorded on a Dandy Warhols record. I don’t have extra songs laying around. There are no “trapped” songs that didn’t make it on the record. I just don’t write much. I don’t actually write at all. I have to wait for them to happen to me, is more like how all of this has been done.

It’s been interesting. I’ve found other people who I am super-impressed with what they do, and I’ve tried writing with them on occasion. It’s nice. It’s a great relief to know–to be able to go in to write a song and know confidently that you are going to come out with something. It’s a great relief to know that I can. I can actually write a song on command if I have someone there to work with and keep each other… I think most of it is just keeping each other focused, because I’ll just get up and wander off and do something else if I tried to write. I’ll get disappointed that everything that comes out of me seems really cliché and obvious, and then I’ll get up and wander off and go, “Fuck it.”

It’s nice writing with other people, and David has certainly written some great stuff. “No New Tale to Tell” is lyrically one of the most amazing songs ever written. Do you remember that one? “You cannot go against nature, because if you do go against nature, it’s part of nature, too.”

When I got a chance to see Bauhaus a few years ago up in Maryland, it was just amazing. I felt like they hadn’t stopped from 1983. It was amazing seeing the same four members again.

Wow. When I saw them they were on tour with Trent [Reznor], and something happened. The light rig went out, so they were playing with the work lights, the white flood lights on. And we were on the back of the stage. Peter Murphy was just having a bald-headed, fucking gothic, old man tantrum. He was livid. And then Daniel Ash was having a pissy cross-dressing tantrum. It was just a mess. It was a mess, so I didn’t really, ya know…

That’s a shame. When I saw them, they were great. But I’ve never had a chance to see Love and Rockets.

That was one of our first tours, was Love and Rockets. So, I got to sing “Bela Lugosi’s Dead” with them. That was the closest to me seeing Bauhaus, actually being the singer for Bauhaus (laughs), for four and a half minutes. That was fucking awesome. And what’s really absurd, you know how Peter [Murphy, Bauhaus vocalist] would take the mic in one fist and the cord in the other and stretch his arms out, pointing his thumbs away from him, holding the cord as far as he could, his arms perfectly stretched out to the sides, and then kind of work his shoulders back and forth and lean forward and do a bow, but with his shoulders right-left-right-left, bobbing forward? That move? I had all of them, because in high school, I learned every Peter Murphy move off of the Shadows and Light collection, and I could do Peter Murphy all the time. So, I had every Peter Murphy move down, so when I sang “Bela Lugosi” with them, they were ready to kick me out of the band by the end (laughs). Gratuitously fucking copying that dude. Peter Murphy is probably the favorite singer of my entire life. He or Andrew Eldridge.

Fuckin’ A, we played with Andrew Eldridge. We played with Sisters last year in Belgium. I got to stand there on the side of the stage and watch that guy sing. Watching him sing is like watching fucking Baryshnikov dance.  It’s like you just sit there and wait for the next spectacular feat of human genius or transcendence. He just walks around; he dresses like an Army/US Marine Corps drill sergeant now; that’s his new look. And the wrap-around sunglasses. And he walks around, and he just points. He’ll pick some weirdo out of the crowd and tilt his head with his asshole wrap-around sunglasses on and point at the dude. Scary guy. The mic comes up to his face, and he goes [makes noise], and it’s fucking amazing. The most amazing thing comes out of his throat, through his mouth, into the microphone, broadcast out to thousands of people, and you see the speakers, and it’s like your spine goes numb, the hair stands up on your arms, and it’s like, “Fuck, this is incredible; this person is not quite like a human.”