A recent trend I’ve had the displeasure of noticing in the past several years is the blatant lack of energy New York, and notoriously Brooklyn, crowds will reciprocate at even the best of shows. These arms-folded, beer-wielding concertgoers stone-face even the most energetic of bands. Never is this the case with Converge.

With a new album due later this year, punk-metal road warriors Jacob Bannon, Kurt Ballou, Nate Newton, and Ben Koller took the stage last night in front of a sold-out Brooklyn crowd at Music Hall of Williamsburg, ripping faces off with new songs and fan favorites alongside aggressive bands Pianos Become The Teeth, Git Some, and Birds In Row.

I swear I’d attest to the sheer sonic impact rippling the drinks in the venue’s basement, Jurassic Park-style. Heavy impact was also felt on my friend’s head from a flying foot sometime during Converge’s legendary epic “Jane Doe”. Both events can’t easily be replicated by just any band.

Birds In Row’s brief set was first, as they patched muddy, relentless hardcore together with spacey passages, and as the first group of the night, a decent job was done to cleanse the palettes of those slowly trickling in. Git Some followed with a brazen, offbeat quality similar to snide New York punks Les Savy Fav, but their abrasive vocals, straightforward beats, and hillbilly attitude seemed to rile up the crowd only slightly.

Pianos Become The Teeth sparked the pit properly, as lead singer Kyle Durfey and bandmates smashed forth their brand of emotional, atmospheric hardcore. Those who knew the material found catharsis, and those unfamiliar surely became fans. 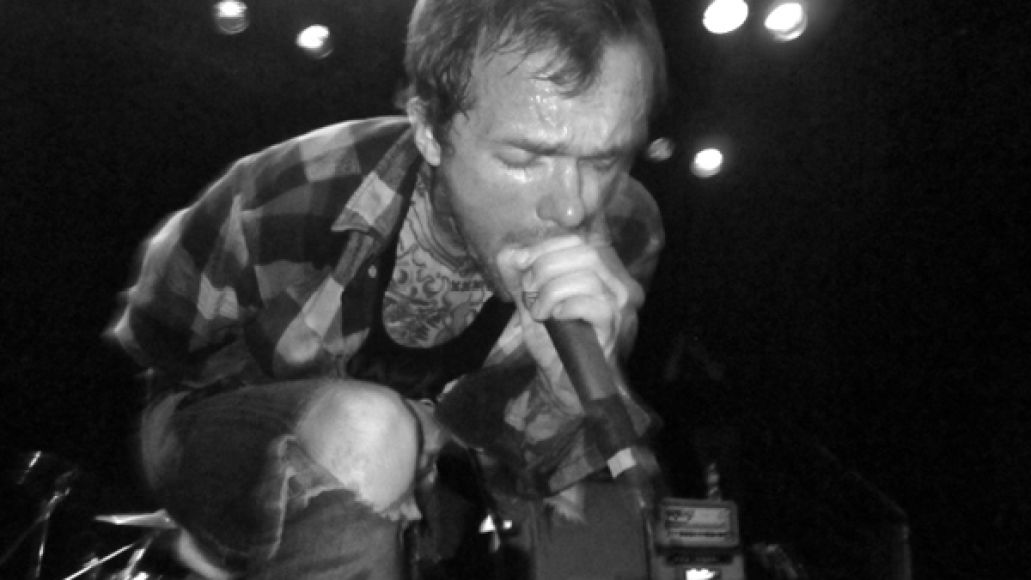 Enter Converge. The hardcore legends reamed through unforgiving powerhouses like “The Broken Vow” and “Reap What You Sow”, leaving snaking, plodding breathing room in songs like “Plagues” from 2006’s No Heroes and “Hell To Pay”, a live rarity. The throng’s responses in “Eagles Become Vultures” and “Last Light” reached a steam-powered, anthemic fever pitch. The Boston/Brooklyn hybrid band didn’t reach further back than 2001 in their catalogue, but the sold-out crowd was more than hungry for Bannon’s familiar cougar-like snarl, Ballou’s knife-edged riffs, Koller’s vicious fills, and Newton’s sludgy low end, as well as new material.

In capturing the photos I did of Bannon and co. sweating and screaming, taking a pummeling was a necessary and welcome job description. And while my friend nurses a slight head bump with an icepack (all is well; no worries), Converge head back to the studio to flesh out their follow-up to 2009’s Axe To Fall and what surely has potential to be one of the most aggressive releases this year.