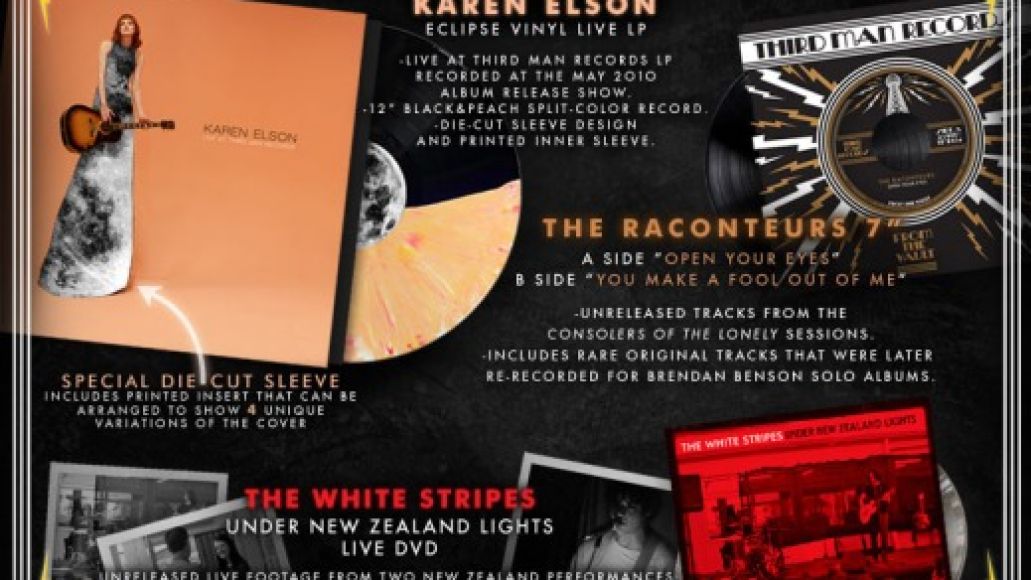 Opting for a more traditional form of distribution this time around, Jack White’s Third Man Records has announced the 12th installment (and second of 2012) in its quarterly subscription series, the Vault. As has become the case for these releases, this new installment is a veritable smorgasbord for true collectors.

The centerpiece of the collection is a new White Stripes live DVD entitled Under New Zealand Lights. The effort utilizes archival footage from two White Stripes performances: their November 2000 in Auckland at the King’s Arms (part of the band’s first international tour), and from their “sweet, innocent” October 2003 gig at Freeman’s Bay Primary School. Along side performance footage, the DVD sees Meg and Jack White offering students a primer on American blues.

Also included is a 7″ vinyl single comprised of two previously-unreleased tracks from The Raconteurs’Consolers of the Lonely sessions. Versions of the two cuts, “Open Your Eyes” and “You Make a Fool Out of Me”, would later surface on subsequent Brendan Benson solo albums (“Fool” on 2009’s My Old Familiar Friend, while “Open Your Eyes” became “Here in the Deadlights” off Benson’s forthcoming LP, What Kind of World). In a statement, White lauded the “Open Your Eyes,” proclaiming it “sounds like a hit. Seems like it could’ve been released as a single and I can’t remember why it didn’t make the album.”

Lastly, the installment will feature a live LP from White’s ex-wife Karen Elson, recorded at Third Man Records in Nashville on May 24th, 2010. Featuring cuts from her debut album, The Ghost Who Walks, the record “breathes a life into the songs that is wholly different from their studio versions.” The package also includes an interactive cover sleeve, allowing purchasers to “effectively play ‘dress-up’ with four different looks for Elson, depending on the orientation of the sleeve,” according to a press release.

Check out Third Man Record’s website to join the Vault.