Apparently, speed metal guitarists and classical string players have quite a bit in common. Despite the seeming disconnect, there’s some historical precedence here: Yngwie Malmsteen and Eddie Van Halen have both cited Niccolo Paganini as an inspiring figure, and Uli Jon Roth has gotten into the habit of playing Vivaldi concertos. The main similarity, other than a flair for virtuosity, is that both are accustomed to playing very fast, very even sixteenth notes with extreme intensity; classical violinists just called it “tremolo.” So, naturally, when avant-metal guitarist Mick Barr (of Orthrelm and Crom Tech) writes a piece for string trio, he sticks to what he knows best: wildly fast, precisely even tremolo.

To see ACME (American Contemporary Music Ensemble) pull off this sort of exercise in technicality is a feat unto itself. Yet, the best part about Saturday night’s performance at The Kitchen was that Barr’s composition was more than an etude in speed and precision. It was a damn good piece of music. Playing sixteenth notes for almost the entire work, violinist Caleb Burhans, cellist Clarice Jensen, and violist Nadia Sirota delved into Barr’s Acmed with passion and drive, turning what could have been a mere side show into a real work of art. 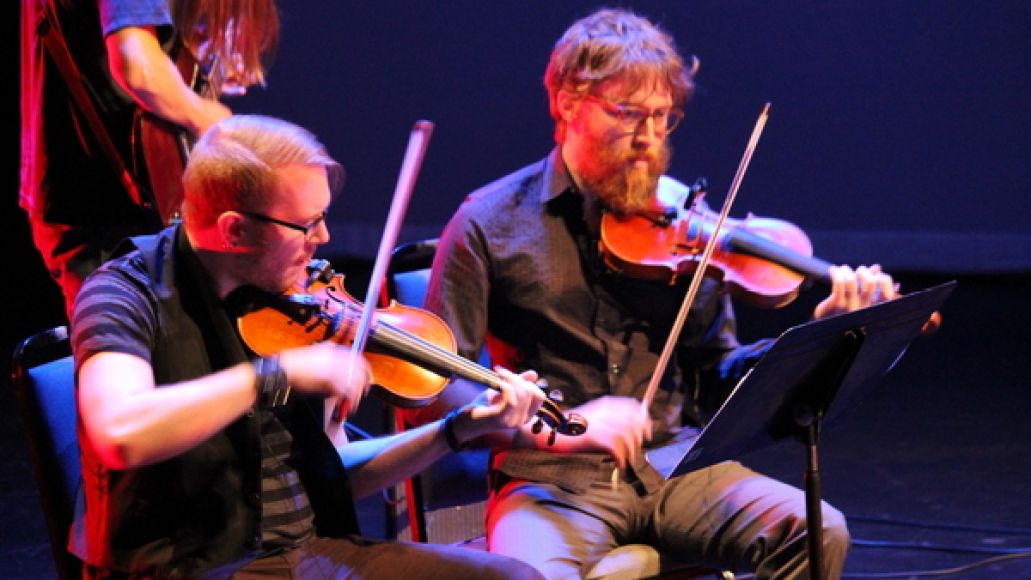 The trio coaxed meaningful phrases out of Barr’s constant barrage of sound, creating arches and grand sweeps of melody. Barr arranges his music into juxtaposed blocks of sound, each stuck in its own melodic and harmonic vortex like some kind of death metal Stravinsky. Yet the ACME players brought out the formal cohesion and line that connected each section, occasionally lapsing into languid tones before restarting the rhythmic juggernaut.

Acmed was the culmination of the first half of Saturday’s program, preceded by two pieces that helped contextualize and ground Barr’s composition. ACME and Barr began the night with Frederic Rzewski’s Les moutons de Panurge, which centers on a long melody followed by improvisation. Rzewski instructs his players not to auto-correct should they get lost in their cumulative melodic buildup, but instead to keep going and embrace the anarchy, creating new canons and polyphonic possibilities. He also leaves space for other improvisatory parts. Fittingly, Barr stuck to fast sixteenth notes on his clean-toned Gibson SG. Although the sound isn’t quite as gnarly as some of Rzewski’s works, ACME increasingly turned the piece into a purposeful mess of sound, capturing the essence of intentional unintentionality that Rzewski desired. 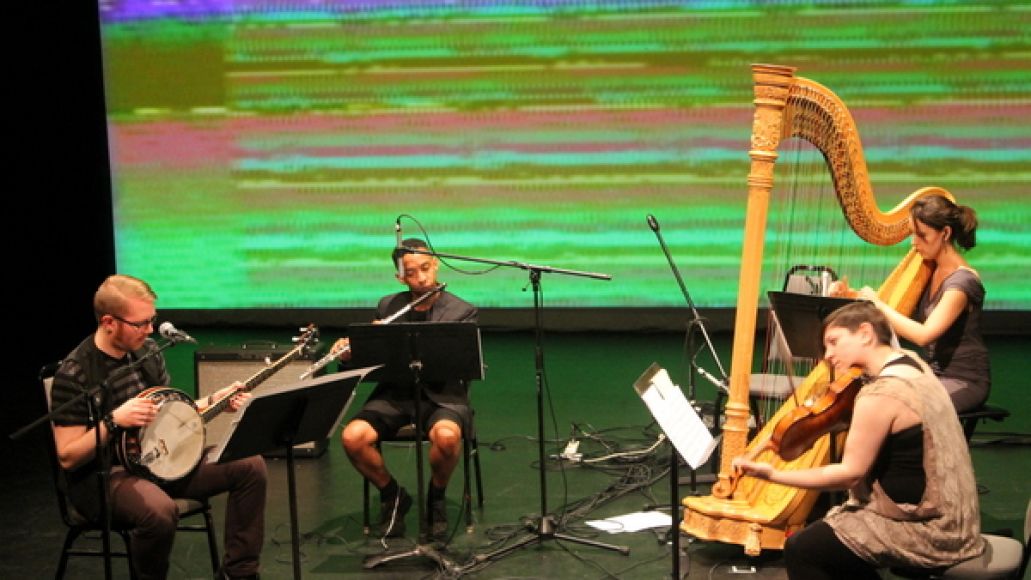 Barr then followed with a solo guitar showpiece that kept up a breakneck pace with volume and distortion set to 11. Flying all over his fretboard, Barr’s melodic sequences could have given off the impression of a masturbatory metal solo, yet Barr is far too humble and reserved to come off as a limelight-loving virtuoso. Instead, he’s a mild-mannered precision-ist with a taste for shredding and an ability to find thorny, angular, dissonant melodic ideas. In the wake of these two works, Acmed made perfect sense, midway between the controlled chaos of Rzewski’s classical language and the ramming speed of thrash metal.

Following intermission, ACME celebrated the release of electro-acoustic composer William Brittelle’s new CD, Loving the Chambered Nautilus. The two halves of the program, though, felt like two different concerts. Brittelle’s music combines pre-recorded synthesizers and drum beats with live string players, resulting in a sort of classical/pop mashup drawing on ’70s minimalism and ’80s electronica. He describes his programmed sounds as “electronic retro-futuristic pop gestures,” but more often than not, the cheesy synths and saccharine melodies came off like a bad imitation of Tangerine Dream scoring the soundtrack to an abstract ’80s movie. 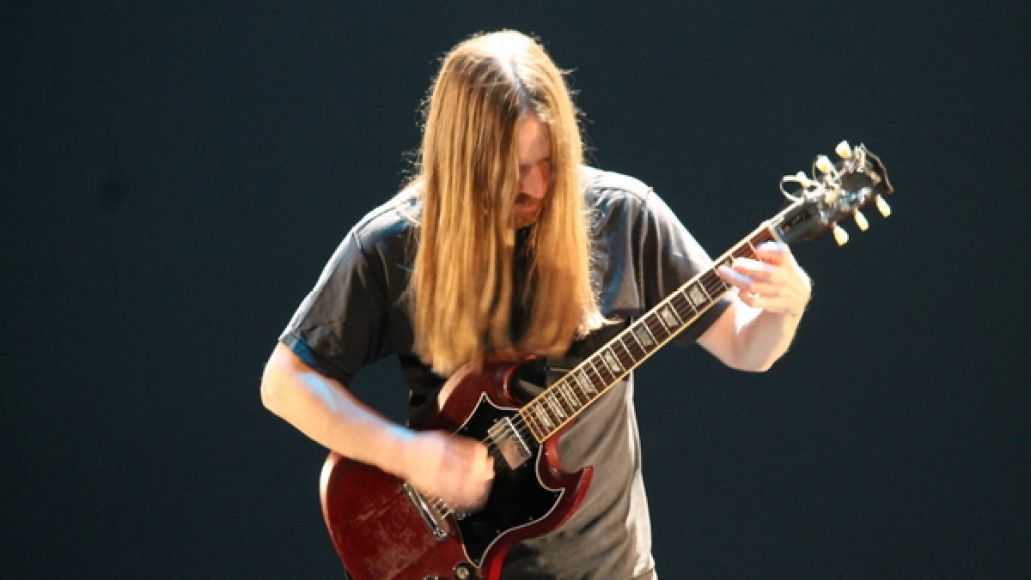 Nonetheless, there were successful moments within his set of pieces. The woefully short Acid Rain on the Mirrordome was a slow, lush soundscape that found ACME meshing perfectly with the electronics, creating a full, cohesive sound. Future Shock (for cello) highlighted Jensen’s considerable rhythmic prowess, with her jumpy melodic fragments dancing around a programmed drum beat in concerto-like opposition. Burhans’ falsetto vocals and looped banjo on the title track were surprisingly enjoyable. Yet too often the electronics were a disparate element from the live musicians. Brittelle writes that he sought to blur the line between strings and electronics in his music, “with both elements coexisting to the point of becoming one,” but it often felt as divergent as Sting trying to sing John Dowland songs.

I’m not really sure how Barr and Brittelle ended up on the same concert-it seems as though ACME just had these two projects in mind simultaneously. While both explore the intersection of popular and classical idioms and styles to varying degrees of success, there was only one point where the two composers came together. During the closing of Future Shock (for string quartet), ACME played machine-gun rhythms with a cacophonous electronic accompaniment. It was Brittelle’s most metal moment, and tellingly, one of his best.