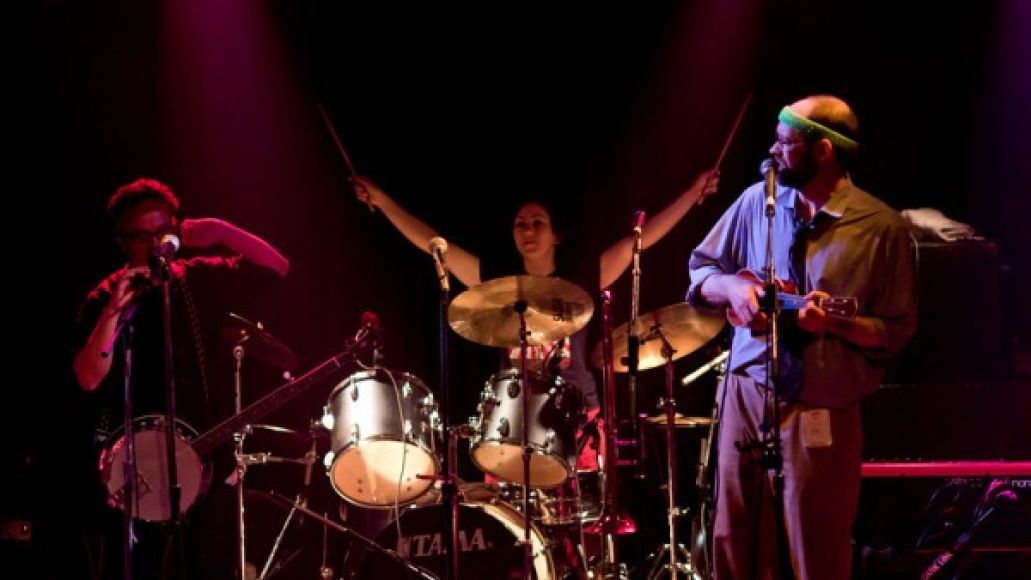 ElvisBride formed when the band members were working together on a play, so it only makes sense that they bring a sense of theatricality to their live show. In the past, they’ve dabbled in such whimsical stage conventions as accompanying short films, planned offbeat banter, and performance art. These hijinks have become as familiar to fans as their scrappy instrumentation and darkly humorous lyrics, and while the bells and whistles certainly are amusing, the Chicago collective is most fascinating when dabbling in sincerity, as evidenced by Tuesday night’s show at the Double Door. The gentler tunes were the ones that stood out. 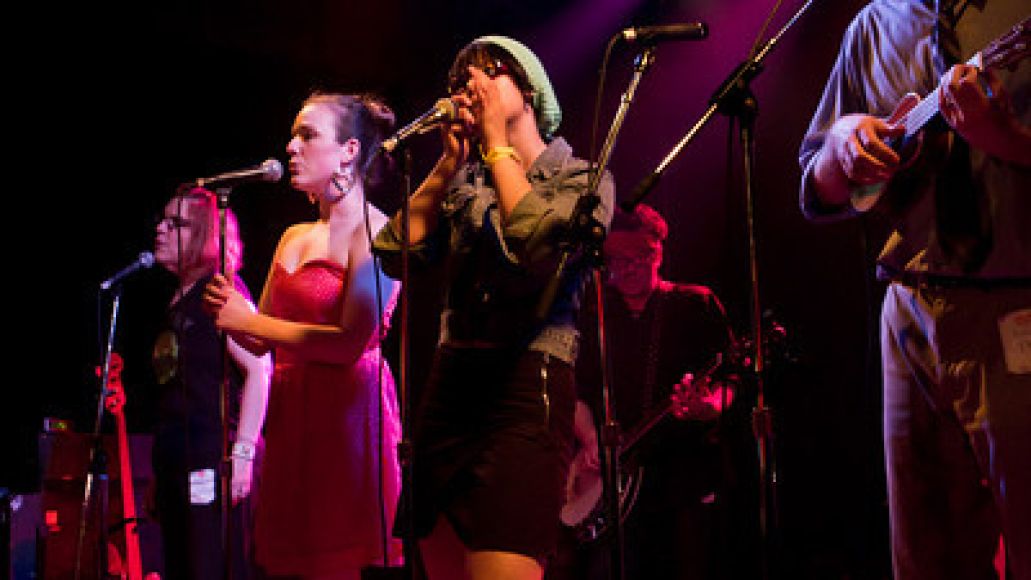 Don’t get me wrong. The bizarre sci-fi wordplay of the “Dr. Computer” saga and the dictatorial preacher of “Shake It” are always welcome.  But the highlight of the night was “Claire”, a newer, less aggressive tune. Troy Martin’s tender ukulele and the double helix of Taylor Bibat’s and Casey Cunningham’s vocal harmonies evoked something youthful and nostalgic, a feeling that usually takes a back seat to the curious comedy at ElvisBride shows. The lyrics still had the band’s signature macabre twist, describing a miniature woman that the narrator delicately keeps inside his pocket, but at the end of the day, it was a love song, or at least felt like one. The same went for the equally pristine “Lost Our Breath”. “This is a song you heard at your prom,” the band quipped before playing it. The audience laughed, but it could have easily been true.

Antics and empathy melded perfectly during the bookends of the evening. Martin took the stage by himself and softly strummed while repeating the words “we can’t begin.” One by one, his bandmates entered and trickled in with their respective parts, with banjo showman Matt Test still missing when the song ended with the completed lyric: “we can’t begin until everyone’s here.” Test then dashed forward in a huff before launching into the proper set and ranting about the spiritual killing of mankind. At the night’s epilogue, the tune received a quieter, reverse treatment, with everyone leaving until Martin was once again alone. The lights thinned to a dim spotlight on the ukulele player as he strummed his final note and thanked everyone for coming, proving that even in theatre, the most compelling moments are often the simplest.