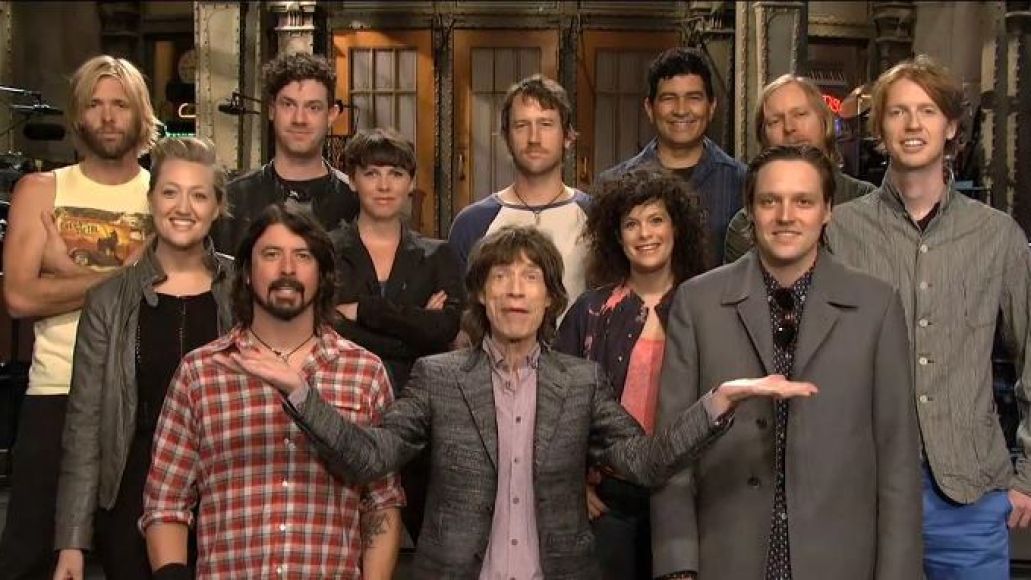 Few would argue that these are the glory days of Saturday Night Live. But if there’s one thing the late-night staple has been solid at as of late, it’s their musical guest bookings. This season alone featured Radiohead, Jack White, The Black Keys, Coldplay, Drake, Bon Iver, Florence and the Machine, Usher, The Shins, Sleigh Bells, Foster the People, and Robyn. And to cap it all off, last night’s season finale boasted the biggest performance of ’em all when Mick Jagger appeared alongside Arcade Fire, Foo Fighters, Jeff Beck, and The Strokes’ Nikolai Fraiture.

Jagger first teamed up with Arcade Fire and Fraiture (who played bass) for a rendition of The Rolling Stones’ early single “The Last Time”. Later, Jagger and Foo Fighters ripped through The Stones’ “19th Nervous Breakdown” and “It’s Only Rock ‘n Roll (But I Like It)”. (Amazing side note: Three hours prior to SNL, Foo Fighters headlined The Bamboozle festival in Asbury Park, New Jersey.) Finally, Jagger joined Beck to perform an original blues composition about the presidential election.

Arcade Fire also appeared at the end of the show to help send off cast member Kristen Wiig. With Jagger, Steve Martin, Jon Hamm, and fellow SNL cast members singing along, the band performed The Stones’ ”She’s A Rainbow” and “Ruby Tuesday”.

Replay all of the performances below (via The Audio Perv).

Mick Jagger and Foo Fighters – “19th Nervous Breakdown” and “It’s Only Rock ‘n Roll (But I Like It)”: