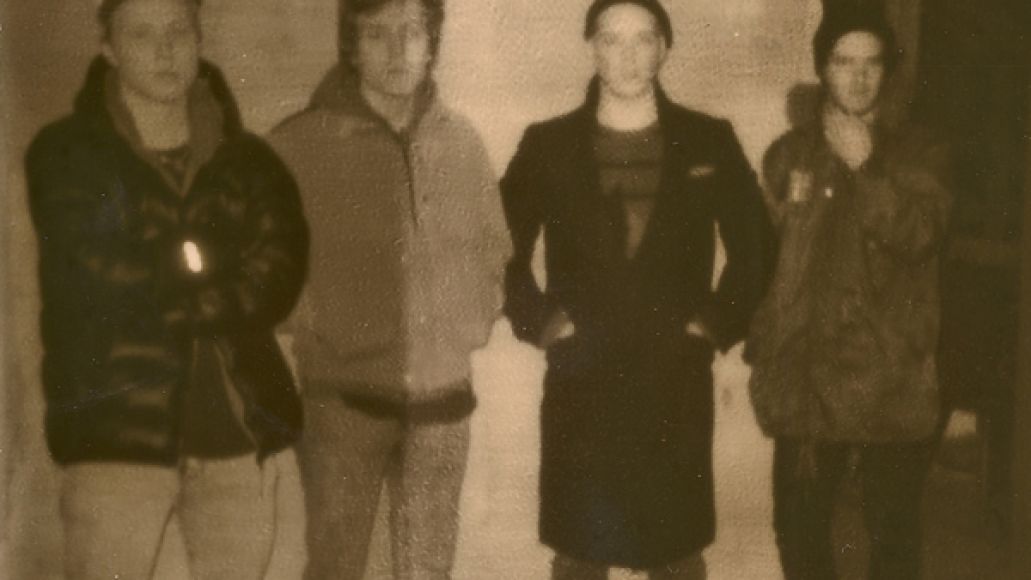 Rock ‘n’ roll has never died– and it never will. Still, it can lose its way ever so slightly, as we’ve seen in recent years with the introduction of Web hype as a career accelerant. A slew of young bands have nabbed record deals, national tours, the whole works on the back of MySpace demos or for perpetuating some mysterious aesthetic that fans and critics eat up like candy. Gone for so many of these acts is the hard work and the struggle normally presented, the pain and difficulties they must face to test their mettle on the road to rock stardom. There’s no agony or character-building resistance when you step right out of the rehearsal room and on to page of every blog.

Swedish proto-punk upstarts Holograms know a little of the disappointment that forges great bands. Sure, their debut self-titled LP (due out July 10th) is dropping via Captured Tracks, but the four young lads have quickly learned that the real heavy stuff starts now.

The band (bassist/vocalist Andreas LagerstrÃ¶m, drummer Anton Strandberg, guitarist/vocalist Anton Spetze, and synth player Filip Spetze) formed while working in a factory, having already played in other acts in the scene before deciding to hook up together. “The aim was to form a band that explored new sounds and new influences,” LagerstrÃ¶m said. Anton Spetze quickly amended that: “I had a synth that you wanted,” he said laughing, explaining the rarity of such a mystical piece of equipment in Stockholm’s punk community.

And the synth’s introduction into the band is overwhelmingly a defining characteristic, something that sets their angsty punk apart from their contemporaries in many ways. According to the band, it’s an old analog synth from the ’70s or ’80s (now complete with broken key), the type of instrument that was picked up by their influences, the forefathers of the synth-punk marriage: The Units, Screamers, and Suicide. Of course, not everyone has an appreciation for the true classics. “Stockholm is a little close-minded,” LagerstrÃ¶m said. ”There’s not that many people that liked us much here, or no one really cared. It’s hard to know how people are feeling, ’cause Swedish fans think they’re cooler than everyone. Still, it’s a good school to go through, to learn to accept that and do your own thing.” 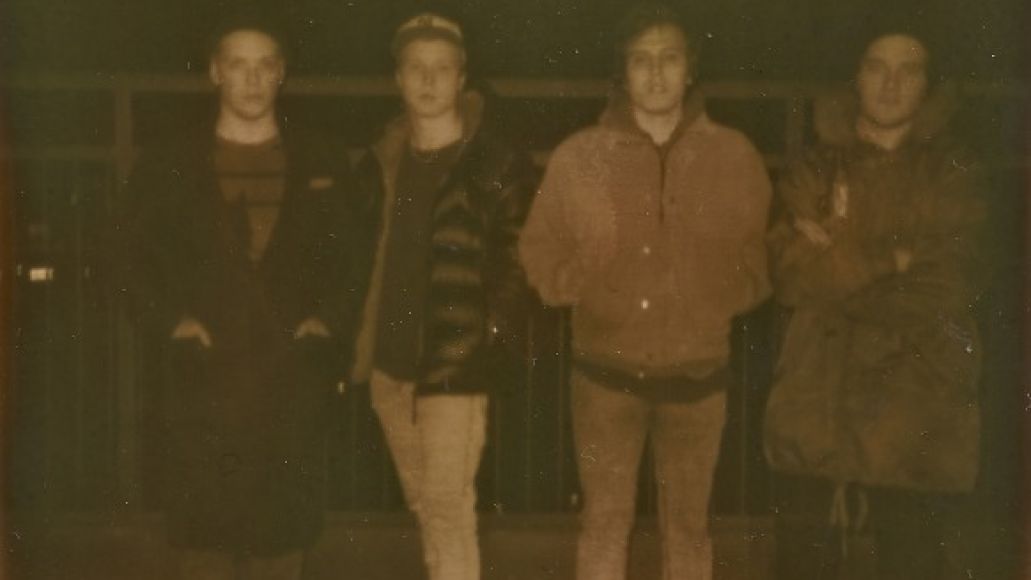 The hardships of being rock stars extended beyond their home country and its snooty fans. A recent European tour ended with the band out 3,000 Euros and stranded somewhere near France for a short while. They’ve also been out of work as they gear up for more touring, living, as LagerstrÃ¶m said with a mix of disappointment and resiliency, “on the edge of poverty,” uncertain how they’ll pay rent until they tour in the U.S. this September. “Still, I’d rather I don’t have money than go to a shitty job,” LagerstrÃ¶m concluded.

Call it a reaction to the elitism (or the effects of being broke), but the band looks at America as a beacon, a destination where their music can find a home; every pitfall and adversity will be worthwhile when they land on its glowing shores. While they have yet to make waves back home, their approach and sound should be welcomed by U.S. audiences in search of something truly refreshing. Where other bands play coy to manipulate and draw attention, the band is unapologetically direct in their discussion of their sound (though they purposefully refused to reveal the secret behind their name, offering only that they’ve been asked “Where’s Tupac?” far too often).

While their colleagues will discuss music at great lengths, talking sentiments and fears and how they shaped all that into true art, Holograms as a unit finds difficulty in distilling their process. “Inspiration is the hardest thing to talk about,” Anton Spetze said. “We all like Bruce Springsteen or The Gun Club, but it’s never been like, ‘Let’s sound like this group.’ We just want to make fucking songs.” LagerstrÃ¶m agreed with his bandmates statement, illuminating is own apprehension and unfamiliarity with the wounded songwriter archetype. “I’ve never talked about my songs, and I’m really self-conscious about it. I think it ruins the mystery behind it, and it’s nicer when people have their own interpretations. I just know I don’t want to make songs that are self-indulgent.”

To avoid such a fate, the band approaches their music by opening themselves up to a host of influences. Their sound started with a base of early ’90s Swedish indie-pop, with the band finding something worthwhile in the underlying emotions of acts of that not-so-forgotten era. “There is lots of angst and honesty and heart,” Anton Spetze said. “They were doing really melancholic things, but they were full of energy. We look to capture those feelings and to capture those kinds of emotions. We go for what sounds best, and to fit the synths in organically so that it sounds more real.” Working in that framework, the band utilizes the ever-crucial synth as a building block, something basic and essential that never demands the majority share of the spotlight. The album’s lead single, “Chasing My Mind”, exemplifies that perfectly; every guitar strum, every drum crash, and every bit of vocals are simultaneously sustained by and enhanced by the unmistakable, vintage hum of the synth, growing and shrinking in parts to shine as necessary. “There’s a dynamic that we have,” Anton Spetze said, “that could get lost or disappear if we went back to just drums and guitar.”

The band also makes use of the synth to parallel something the song is working to accomplish, be it a lyrical message or some musical statement. “Memories of Sweat” has a Gothic vibe akin to Christian Death, with the synth layered miles below a hardcore maelstrom of Robert Smith-ian wails and the tick-tock of guitars. The idea to bury the meaning came from LagerstrÃ¶m’s favorite muse: whatever book he’s reading at the time. “I was reading this book, Confessions of a Mask, about a Japanese author who’s a homosexual in the 1940s. He’s obsessed with death and sex, and he hides his feelings about war and dead boys.”

Album closer “You Are Ancient (Sweden’s Pride)” is far more deceptive. On the surface, it sounds like some Oy-tastic love letter to Sweden, built on to the rumble of pub rock guitar that pops like low-level machine gun fire. Yet the synth and the guitar parts shake and falter, hinting to the listener that not everything is as joyous and wonderful as it may seem. “I read a lot of books about Swedish history, and there’s a right wing movement on the rise,” LagerstrÃ¶m said. “It’s scary, so this is sort of a jab at them. I feel like nationalism in the world is not something to be proud of. Like, why would you be proud of a country built on blood?”

LagerstrÃ¶m’s mix of self-doubt and openness about his work tells a greater, decidedly rock and roll truth about the band: They only do things as they see fit, no matter how inconsistent their actions may be. “I want to write to challenge myself,” LagerstrÃ¶m said. “Not to write about how I went to this bar and started a fight, so I guess that makes us pseudo-intellectual. But people care about lyrics and being socially conscious. I don’t care; I write about what I wanna hear. So I don’t think people see us as an intellectual band, and that’s not a problem.”

With their potentially career-altering U.S. tour still a few months away, the band look beyond that to their next release and whatever may follow after that. Like great rock bands before them, they’re turning the obstacles they’ve faced and the hard knocks they’ve endured into further inspiration. “We want to get more exotic in our sound,” Anton Spetze said. “More of a dystopic or futuristic vibe, even if our equipment is 40 years old. Still, it’s not like we’re going to make our Kid A record. Well… never say never.”