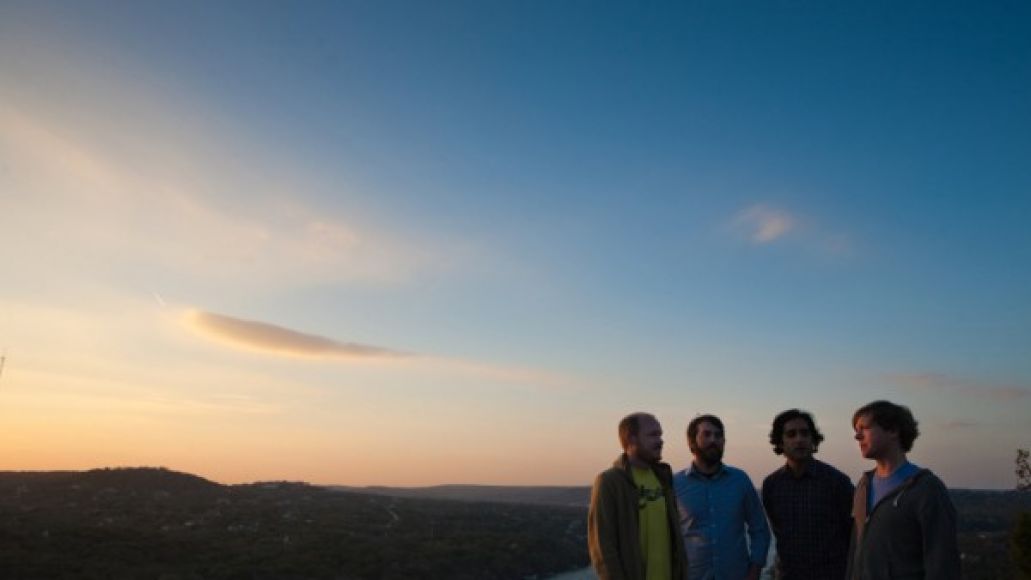 This summer, Explosions in the Sky will close up their tour for their sixth studio album, Take Care, Take Care, Take Care. And yet, the Austin collective is as busy as ever. For the first time in their career, they’re issuing music videos, closing festivals they once used to ignite, and scoring future films. There’s a lot happening for this instrumental four-piece.

Recently, Consequence of Sound’s Phillip Roffman had the opportunity to reflect on the tour with guitarist and songwriter Munaf Rayani. They talked about nostalgia, emotions, and what’s to come for Explosions in the Sky.

“Postcards from 1952” was your third music video to be released from Take Care, Take Care, Take Care. In this video we see some of the most significant moments in life: a mother admiring her child with a photograph, a kiss between a couple, the early steps of a child… Why did you choose this song to embody those images? Also, why did you choose The Huffington Post to launch the video?

We had been talking to a few friends of ours who are pretty creative people (Peter Simonite and Annie Gunn). They elected [to produce] “Postcards from 1952” and gave it a go creatively. We brainstormed and we thought about a couple of things, and they just really flourished those ideas and brought it to life. In our opinion, they knocked it out of the park. We chose The Huffington Post as the platform to present and launch [the video] because they had never really done that before. It was very lucky for us that they considered doing that. It went well and reached a number of people who don’t necessarily listen to that style of music or the greater genre of indie rock. We were glad to reach an audience that wouldn’t have listened to us otherwise.

That’s a good question. I mean the beauty of instrumental music is that it’s up to their interpretation; it’s yours to make what you want it to be. But for us, and the idea of this album, Take Care, Take Care, Take Care, and the approach in which we wrote the songs and what we ultimately came up with–you know, we kind of just wanted to move forward along the lines of what we have been doing. Luckily, we’re a band that’s past a decade old. I mean, we’re moving into our thirteenth year. That’s a feat in itself to us. You know, when we started to play music, we never thought it would go on this long. The fact that we’re here and we get to do what we do like this– what a feeling.

At the same time, we didn’t want to rewrite things we had already done. This album was a way for us to progress. The title Take Care, Take Care, Take Care was more of this longing feeling of “things are changing” and one has to move forward with change. Some might interpret this as a “sign off” by us– which is far from what we intended. But more or less kind of like um… a moving along. We were there and now we’re going to go there… You know, we left a little note behind in a house we just moved out of. I hope what they experience is as beautiful as what we’ve seen before.

What is one of your fondest bits of nostalgia or memory in the music you make?

We’ve been in some pretty spectacular instances over the last little bit. Getting to open for and play amongst some musicians we really admire like Fugazi, early in our careers. And what a silly term, “career”, but that’s what it’s become. Still, that was a very monumental moment in our lives, not just musically but generally speaking, too. Later in life, we got to open for The Flaming Lips, and that was yet another big occurrence for us. We sharing the stage with people who inspired and molded our thoughts. And not just opening for these acts but then playing on festival stages in which you know spectacular musicians are abound. You know, people who have written things that have moved us, and now we’re “invited to the table that they sit at,” metaphorically speaking.

All these moments are pretty overwhelming, and we have to take account for what it is we’ve done and what it is we’re doing. To break it down into its most simplest thought, we just put a few notes together and because we’ve done that, it evoked a certain emotion in us, and even more remarkably it evoked a certain emotions in others, and even more remarkably, it allows us to do it with our lives.

What is the most significant moment in creating these certain memories or bits of nostalgia?

That’s a good question and probably a tough one. The most significant moment, in our [earlier] days was sitting together and saying, “This is what we want to do,” and quitting our regular jobs. You know, that is a very scary moment in any young person’s life, in that you’re going to pursue this dream exclusively with the thought of no return. It really is a gamble. Sometimes you roll a one, sometimes you roll a six…and luckily we got one of the better numbers.

Miami is being reached for the very first time by Explosions in the Sky at Grand Central [previously, Explosions in the Sky only made it as far as the Everglades with Langerado Festival back in 2007]. This is an extremely intimate environment. Beyond intimacy, beyond emotions, what else do you guys play for?

Well, when we’re playing live, we hope to achieve a trance-like state. Not just for us, because the idea for us is to truly get lost and yet catch this stride when we can just look at one another and just know changes or know what we’re thinking like: “Go this way now.” Once that is achieved on stage, then hopefully it can pour into the crowd and then those who are there aren’t just listening…but experiencing. You know, we try our best not to have a separation. Mind you, yes, we are on stage and the people are in the crowd. But ultimately the idea is that we are all one. So my melodies aren’t necessarily being played by me but hopefully being felt by everyone. This goes for Mark’s melodies, Michael’s, and Chris’s drum beat. Yet, the idea is that it’s not us that’s playing…it’s you. 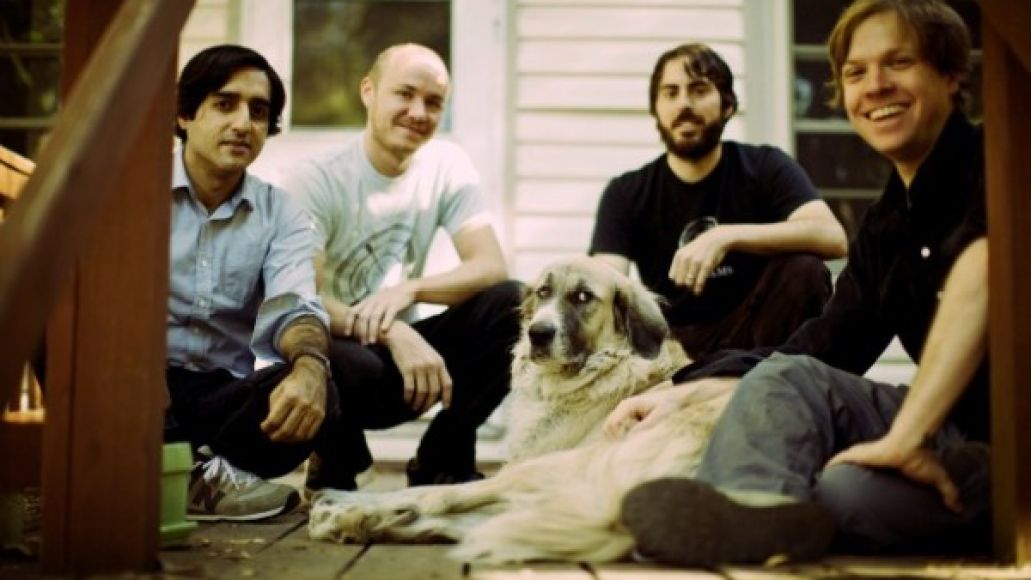 What brought you to Miami?

This is about a year and a half in for Take Care, Take Care, Take Care, so the idea was to start getting into places that we hadn’t been in a long time or at all even. We tried to go off the beaten path. It’s one thing to draw a large crowd in New York, Chicago, or L.A. It’s another thing to accomplish that same feat in, say, Arizona, Colorado, or even Miami. Since the inception of the band, we’ve been our biggest promoters. In order for us to promote ourselves, we have to go door to door.

It’s pretty serendipitous that I am speaking to you now because a film is currently being made by filmmaker David Gordon Green. We’ve done some music with him before– or he’s borrowed some music of ours, like in his film All the Real Girls— which was a truly beautiful movie about love and loss… and then a couple of years after that he did a film called Snow Angels that starred Sam Rockwell, and that too, what a beautiful film, where we had the opportunity to score the last minute-and-a-half of that.

We will be scoring his latest film Prince Avalanche [due out in 2013]. [The film] was a very small ordeal, but I think it’s going to have a big impact. This particular picture is going to be exceptionally beautiful in that we’re making it with friends of ours. There’s no hired gun on this. We’ve formed this friendship with David Gordon Green in the last eight years and just have been a big fan of his filmmaking style, and in turn he’s been a big fan of how we write music. Now, there’s a moment in which we’re really combining these forces. When it does come out, I hope it means something to somebody.

We hope to score more pictures, it’s in our mind constantly.

Based on your itinerary, you’re hitting up nearly every music festival around the globe this year. Do you prefer the festival approach?

It has its pros and cons. The beauty of an intimate room is that we’re right up next to each other. You could be standing three feet from the head of my guitar, and that’s a certain beauty that cannot be achieved at a festival stage. Yet, the beauty of a festival stage is that there’s probably a major percentage of that darkened crowd that hasn’t heard us. It’s exciting for us to win them over. Everyday we’re trying to gain a new fan or have a listener listen to our music for the first time and appreciate it. Festival settings for us, especially in this last year or two, have been an interesting point of reference in our careers.

When we first started playing festivals, we were the 2:30 p.m. spot, you know? As the years progressed, we moved from 2:30 p.m. to 3:30 p.m. to 5:30 p.m. to finally on some of these festivals, we were closing the second stage or we were the sunset slot for all of them. This makes us feel pretty incredible. How did we do it? Because everyday…we’re baffled. Still, we’re not trying to cause too much of an alarm or cause scrutiny as to where we stand because we’re truly enjoying the moment we’re in now. We are forever grateful.

Sigur Rós shifted their sound with minor English vocals; Explosions in the Sky has incorporated some form of narration within their songs, which can be seen in “Have you passed through this night?” off of the album Those Who Tell The Truth Shall Die, Those Who Tell the Truth Shall Live Forever. Does the band ever think about doing some minor vocal stylings beyond narration?

Probably not actually lyric things or anything of that nature. We’ve tried to incorporate some humming, whistling, and chanting to serve as another level of melody. But over the course of time we’ve been playing, we’ve done our best to hone our skill and become stronger in what we’re already strong at. I think the introduction of actual lyrics would detract from the emotional qualities of the music on its own. Again, the beauty of instrumental music is that the story is yours to make. Everybody’s story is a little different.

What a fantastic phenomenon in humans being genuinely and deeply effected by tone, melodies, guitar lines, and drum beats. These are visceral things that draw on classical music like Mozart, Beethoven, and so on and so forth… these guys aren’t singing and yet they are still playing music that could make you cry — that could make you pissed! We are light years behind these guys, but if we can stay on a course and try to achieve what they achieved, we’ll be the lucky ones.

Phillip Roffman is CEO of Subculture, a South Florida-based company that brings entertainment to suburban communities that lack the excitement and flavor most metropolitan areas experience. Follow him on Twitter @SubcultureUs.

Interview: Munaf Rayani (of Explosions in the Sky)