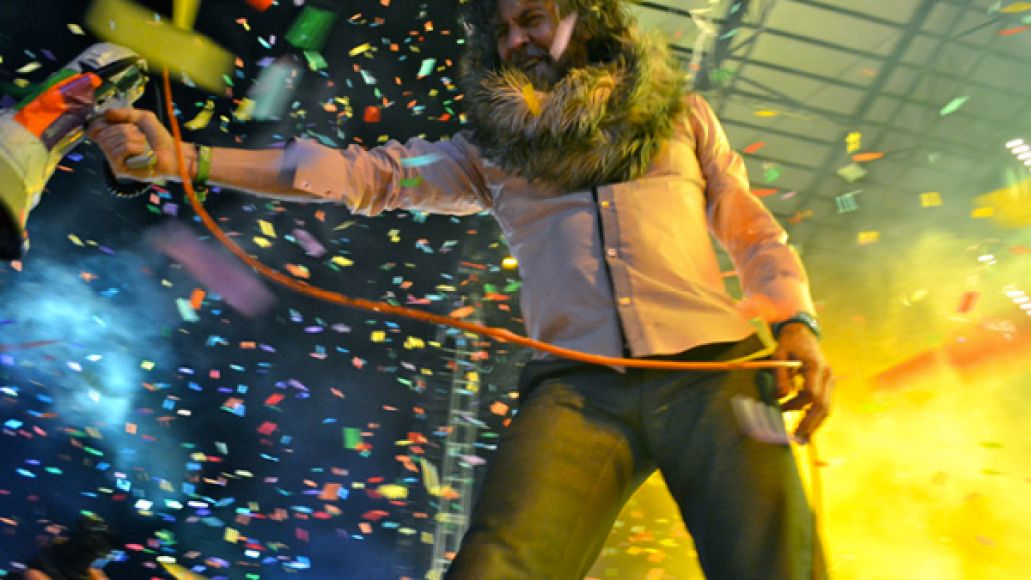 Got 24 hours to kill? Well, why not spend it with The Flaming Lips as they attempt music history. As previously reported, Wayne Coyne and his band of merry weirdos will try to break Jay-Z’s Guinness World Record for Most Concerts in One Day by playing eight shows in eight cities. MTV will be streaming the whole thing online as part of this year’s O Music Awards.

The Lips will kick things off in Memphis at 7:30pm ET before boarding the good bus ‘Endeavor’ and heading towards New Orleans. Each performance will feature some of the band’s heady fwends, which Coyne detailed in a recently posted (clearly unpracticed) video. They include: Gary Clark, Jr. (Clarksdale, MS), Grace Potter in the Nocturnals, who will join The Lips for Led Zeppelin covers (Oxford, MS), Neon Indian (Jackson, MI), Jackson Brown (Hattiesburg, MS), Phantogram (Biloxi, MS), and Gives (Baton Rouge, LA).

At the clip’s end, Coyne teases some surprise guests for the final set with Grimes in New Orleans. It cuts out just after the first sound, but it certainly sounds like a “K”, and Ke$ha seems a logical guess. However, Coyne clearly suggests “perhaps even” another mega-guest: Roger Daltrey.

While on the bus, the band will also be joined by Jackson Browne, Neon Trees, Karmin, and Jackass star Chris Pontius as they hand out awards for the 24 O Music categories.

You can watch the video below, and head over to the O Music Awards site to catch the stream. Record setting or not, it certainly looks like it’ll be one for the books.

Webcast: The Flaming Lips attempt World Record for Most Concerts in One Day