Edmonton, Alberta duo Purity Ring unlocks something primordial and ancient with keycards and retina scanners. Singer Megan James and producer/instrumentalist Corin Roddick don’t use synths and reverb to shroud emotion, they use technology to serve up emotion that is bloody and still beating. It’s as if only Roddick’s trap beats can coax James’ nascent voice from her diaphragm. Shrines isn’t trying to capitalize on some moment where rapid hi-hats and deep bass mix with dream-pop vocals; it manipulates two elements to make something malleable, elusive, sexual. It’s also legitimately one of the only albums that I can both sleep and run to.

Maybe it’s because James lives so wildly in her dreams. “Sleep is a welcome gadget,” she sings but the songs here aren’t hypnagogic coos, or feckless rooftop philosophies. At first glance, the song titles on Shrines look like gibberish, but almost every one is a little portmanteau: “Bellispeak” (belly speak), “Lofticries” (lofty cries), “Obedear” (oh but dear)– little winks at the otherworldly rabbit hole that houses Shrines, and initial clues that the world of the album is just a little askew.

James’ words paint surreal pictures from dreamscapes and fantasy worlds, like a Bruegel painting or the J. Lo vehicle The Cell. Bodies are just vessels for buried emotions and crippling spiritual questions: These songs rend James’ flesh. She tears her ankles bare, sews hands into her bed, sticks red toothpicks in her dirt-filled heart, drills holes into her eyelids, lets liquids flow into fractured skulls, shucks all the light from her skin, while ears ring and teeth click ad nauseam. What reads like a gothic cry for help actually sounds confident and cathartic when sung in James’ coy soprano. On “Fineshrines”, when she asks for someone to “cut open my sternum and pull my little ribs around you,” it sounds downright sweet.

Not a song on the album goes without mentioning anatomy, whether it’s maimed or no. “Saltkin” is thick with fantastical sex, as she shamefully admits that “still my sweating lips wield my starving hips.” There’s much fear and fragility  that underscore the sensuality and violence on Shrines, like on “Belispeak”, when James begs her grandma to “lend me your wispy frame, and guard my precious powers in its cage.” And then, all those big-ticket emotions are blanketed with existential dread and paranoia. It fogs every track, especially “Obedear”, where she laments that the “sky is low” and to “gather up its harms and gods with grateful arms.” James tangles lofty prose, severe themes, and grave repercussions into a precarious web of impressionistic words — barely able to stand on its own.

Enter Roddick, the glue that keeps this whole thing together. Underneath James’ deified visions of herself run Roddick’s beats– appropriated from Lex Lugar’s FruityLoops folder and dub-step labs in the UK. The sub-bass runs low and hits hard in the chest, like a constant reminder of how corporeal James’ lyrics are. Roddick plays around with James’ vocals, perhaps adding some slight auto-tune here, a chorus effect there, or sparingly adding vocals that are one octave below, much like The Knife or Burial did. He’s always careful to stay out of James’ way, keeping her vocals are front and center in the mix, but his backdrops are crucial to keeping the album alive. Whether it’s the cloudy hip hop beat on “Grandloves, or the veritable banger ”Amenamy”, it’s all meticulous and dynamic — if it weren’t for the incessant side-chaining.

Side-chaining, or those volume swells on every track that mess up your equilibrium, are signature moves by Daft Punk and Justice, adapted by many including Deadmau5, Flying Lotus, and now Roddick — who ducks the synths whenever a kick drum hits. He just leans on it far too much on Shrines. It’s the only element of the album that feels fleeting and trendy, rather than serving the high stakes and huge spirit driving the album.

But James’ penchant for the arcane and mystical would fall flat if not for some of Roddick’s ephemeral elements here and there. Combining French house production techniques with narcotic Flocka beats are what pop dreams are made of, and they own it with style and confidence. That calls to mind 4AD label-mate Grimes, and her album, Visions. Both blaze new paths in pop music, avoid trafficking in nostalgic reference points, and are carnal in their own ways. But where Grimes spars with technology to bring her music into the future, Purity Ring absorb technology to channel something anti-future. No computers, no grids, just bodies and creatures trying to figure ourselves out first. Unless, of course, that is the future. 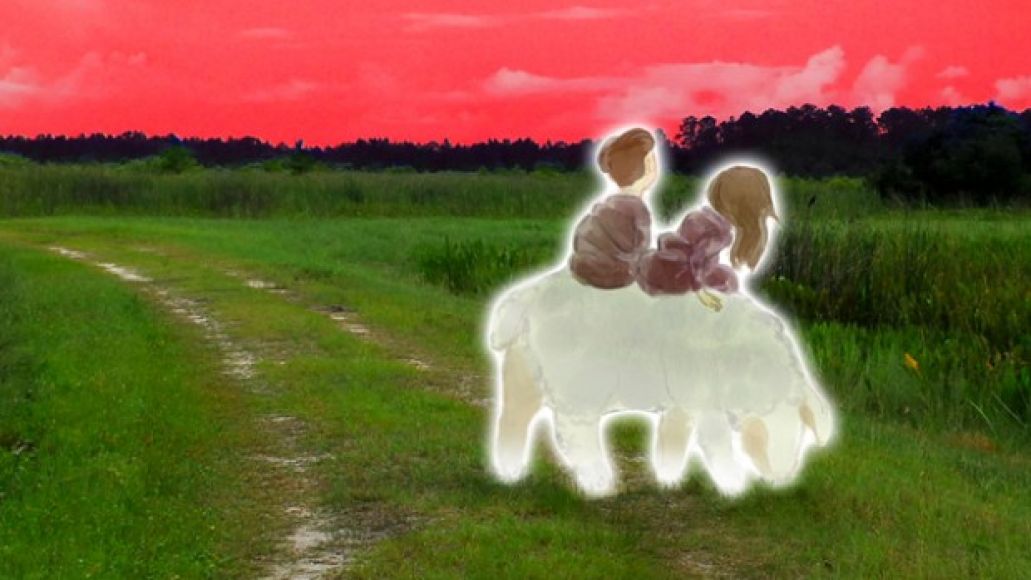