It was probably a bad idea to read Retromania right before attending New York’s inaugural CBGB Festival. Like reading a movie review and forming your own opinion before you actually see the damn thing, I internalized Simon Reynolds’ story about “one of the saddest spectacles I’d ever seen,” a.k.a. The New York Dolls at John Varvatos’ clothing boutique, where CBGB’s used to be. He painted a vivid picture that uncannily resembled the scene at Bowery Electric on Thursday night, where bands like The Waldos and ex-Dictator Andy Shernoff’s solo act performed covers and acoustic versions of former songs. It all seemed macabre next to a “Cherish Buddies Gone Before (their time)” poster, listing deceased musicians like Joe Strummer and Joey Ramone as Waldo frontman Walter Lure performed “Live Under a Chinese Rock” while doing the Charlie Brown. It wasn’t sad, necessarily, but it was a little weird, especially standing next to the inebriated guy next to me screaming “Punk rock blasphemy!” and giving the finger to Lure, who cavalierly gave him the finger right back.

Despite its subconscious influence, Reynolds’ meticulously informed treatise on pop nostalgia only got me so far. Using it as a field guide was like formulating a thesis without any research and then trying to find data that support it, which as any teacher will tell you, just won’t work. So I tried to abandon my preconceived notions about balding, fatting, ageing hipsters trying in vain to recapture the glory days (or, as one concertgoer more concisely put it, “old timers’ Yankee Stadium”). Instead, I tried to make a point of actually listening to the panelists, watching the rock docs, and putting my hands up to whomever was onstage with an open mind. And sometimes, I actually learned something: “Deal with the gig,” a self-described “old punker” told me before shooting back a glass of amber-colored liquid and adding, “Can I give you some fatherly advice? Don’t leave your wallet in the dressing room.” 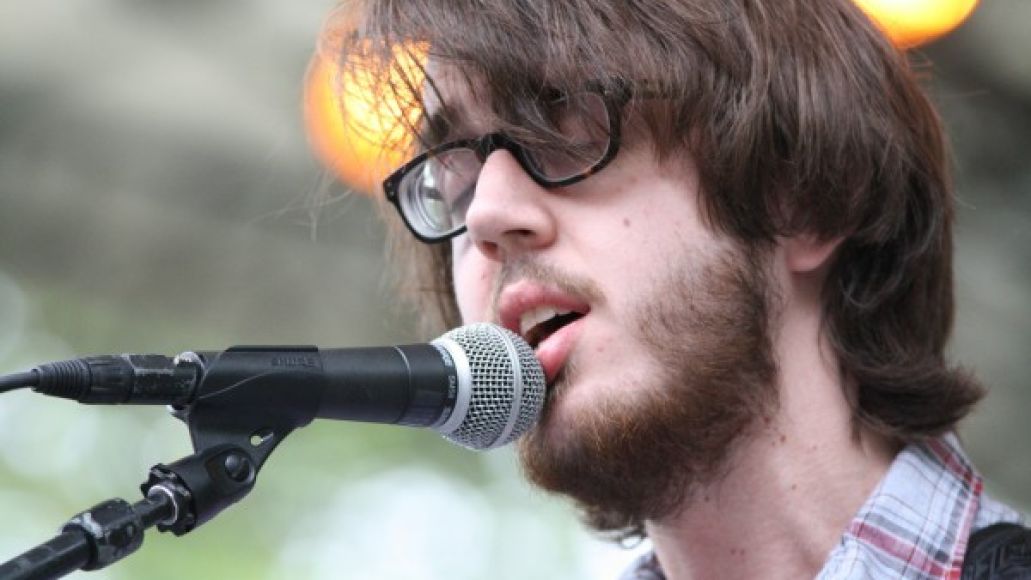 It helped that the organizers of CBGB Festival weren’t trying to bring back the venue, endorse the movie, or generally try to go back in time. They billed the conference as “a fantastic mixture of emerging artist showcases, music business conferences, rock and roll film screenings and industry panel discussions and a whiskey fest to be remembered!” and that’s for the most part what it was. I don’t know if I’d go so far as “fantastic”– you still can’t smoke indoors, Cloud Nothings’ set wasn’t mic’ed properly, and I left my debit card at a Williamsburg bar– but I had fun. At the very least, it was eye-opening in a way I hadn’t really experienced at hipper-than-thou festivals like Googa Mooga, Pitchfork, and the Fader Fort (which, as anyone lucky/bullheaded enough to wait in several hours-long lines in the blistering Austin heat will tell you, is like SXSW as seen on The Real World). I mean, where else can you watch Punk’s Not Dead with an older couple wearing oversized CBGB-OMFUG t-shirts and eating vegetable chips while a few blocks away people get stabbed and bitten at a Cro-Mags show?

I knew that I was missing out by never going to CB’s, as everyone who had actually gone there called it, but sometimes I wondered if I was missing something altogether at its eponymous festival. At Andy Shernoff’s solo set, for example, he played a song called “Let’s Get the Band Back Together”. When he sang, “I am the leader of a rock and roll band,” I tried catching the eye of someone, anyone in the sparse audience to share an “Isn’t it ironic?” eyebrow, but everyone was too busy hanging onto each other and singing along to notice. My skepticism reached new lows during “Find Something Beautiful”’s titular three-word chorus, punctuated by emphatic boot stomps and accompanist Brian Hurd’s supernatural harmonica before the denouement, “And set it on fire.” Shernoff has been an inarguably talented songwriter for longer than I’ve been alive, but the trite, didactic lyrics (granted, he was the song’s co-writer as opposed to the mastermind) and acoustic strumming were certainly a far cry from his former outfit’s proto-punk touchstones like Manifest Destiny and The Dictators Go Girl Crazy. His ardent, whiskey-breathed fans made me consider the possibility that he was just being too ironic, too punk, for even my hipstamatic self to “get”; but I also like to think I can discern good and bad songwriting. And “Pussy and Money” this just wasn’t. 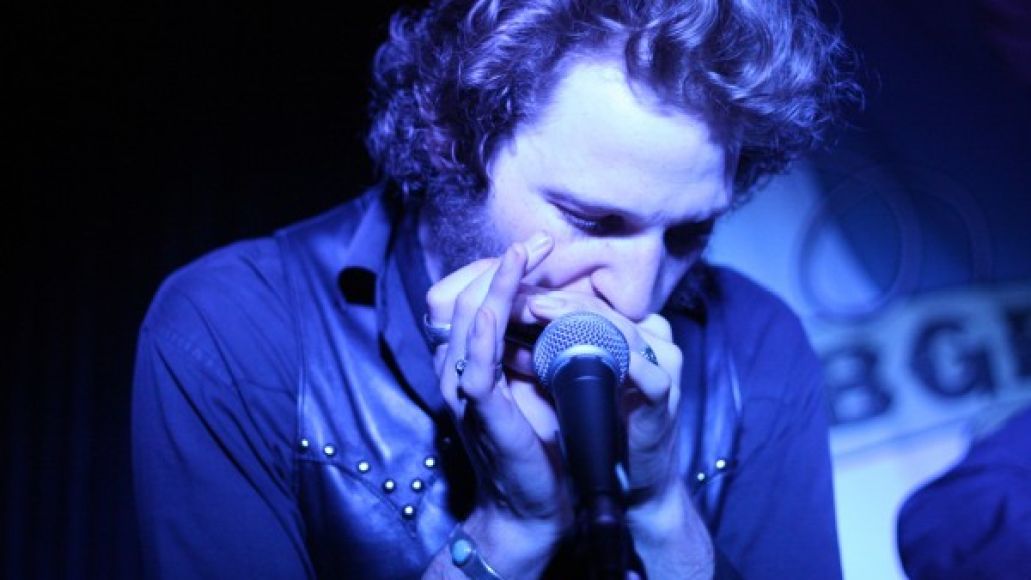 This disconnect extended to Friday’s panel “Do You Want A Record Deal?: No, That’s OK, I’m Good.” CBGB Festival’s website billed its panelists as industry veterans “informing/guiding young artists on how to succeed in today’s ever-changing music business.” And some were, truly, guiding and informative: In one panel, former Warner SVP George White expertly helmed polarizing discussions about Spotify (the service could definitely pay artists more, but it introduces people to and potentially makes lifetime fans of lesser-known bands) and mp3 quality (Reynolds and audiophiles might disagree, but the fact is that 128 kbps is still an improvement over cassettes and Walkmans).

Once Grammy-nominated singer-songwriter Linda Chorney– who pretty much said everything by wearing a shirt that said, “Who the f$%& is Linda Chorney?”– took a director’s chair, however, talk turned to self-congratulatory yearning for the days when you didn’t have to pay people in India to bump up your Twitter numbers. To me, who judges bands based on their Facebook likes, it was a surprising and unwise dismissal of the power of social networking, especially coming from someone who utilized an online message board to get nominated. It also stood in stark contrast to Krist Novoselic’s ringing endorsement of Facebook and other online forms of association, calling it the “millennial makeover.” At least it made me appreciate and respect the former Nirvana bassist’s embrace of new social media. 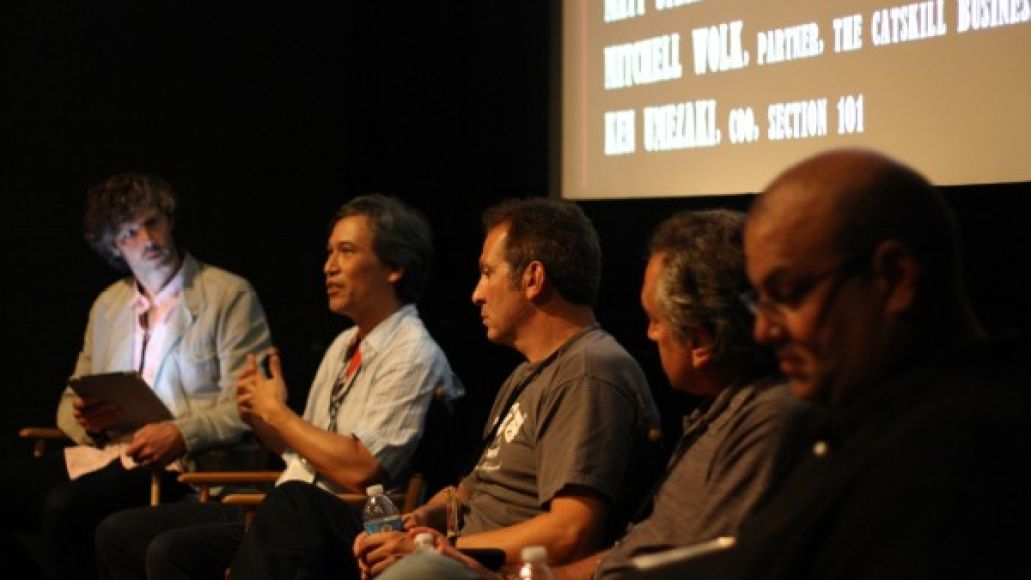 After the show at Bowery Electric and certain panelists’ inability to see the light in the glow of a computer screen, I felt jaded and disheartened. So on Saturday night, I gave the finger to the Lower East Side and headed to an off-CBGB show in Williamsburg. Mostly, my reasons can be analogized with this review of Punk’s Not Dead: “This film, as solid as it is, doesn’t get us inside today’s dive bars, Elks Lodges, and warehouses throughout the U.S. and abroad to feel, hear, and (whoa!) smell those fiery, new local music scenes.” That’s kind of how I felt. I didn’t want to see more former punks wearing porkpie hats or newer bands I’d see in a month at Lollapalooza. I wanted to smell those “fiery, new local music scenes.” I wanted to go to Glamdammit and see The Nuclears and The Flamejobs, and I wound up having a better time there than I had at any official CBGB show (minus Guided by Voices at Central Park Summerstage, because obviously and also Robert Pollard’s high kick).

The Nuclears played exactly the kind of unzipping-Tom-Cruise’s-pants-with-your-teeth testosterone rock  that I had been missing all weekend. Frontman Nick Vivid, who moonlights as a producer and technician by day and whom I had met before Novoselic’s talk, left his shirt onstage to channel The Animals for songs like suspiciously, similarly titled original “Get Outta Here”. The only acknowledgement he gave of his former daylight self was when he smiled and waved at me on his way, microphone in hand, to the bathroom. As his band mates bent over backwards to solo onstage, hair plastered to sweaty foreheads, Vivid pinballed between packed throngs of fans that included glimpses of false eyelashes, fishnets, and glittery flapper dresses on both men and women. They were probably there for Twig the Wonderkid and The Flamejobs’ Cramps covers set at midnight, but at least there was a PBR open bar and some bitchin’, original rock and roll to sustain them until then. And isn’t that the true spirit of CBGB? 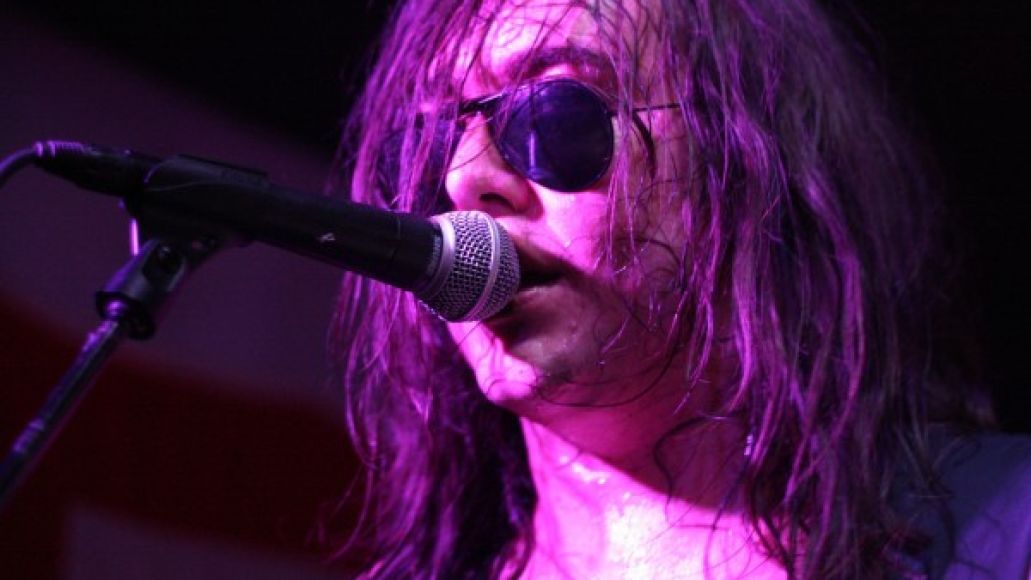 The Nuclears // Photo by Harley Brown

Festival Review: CoS at CBGB Fest