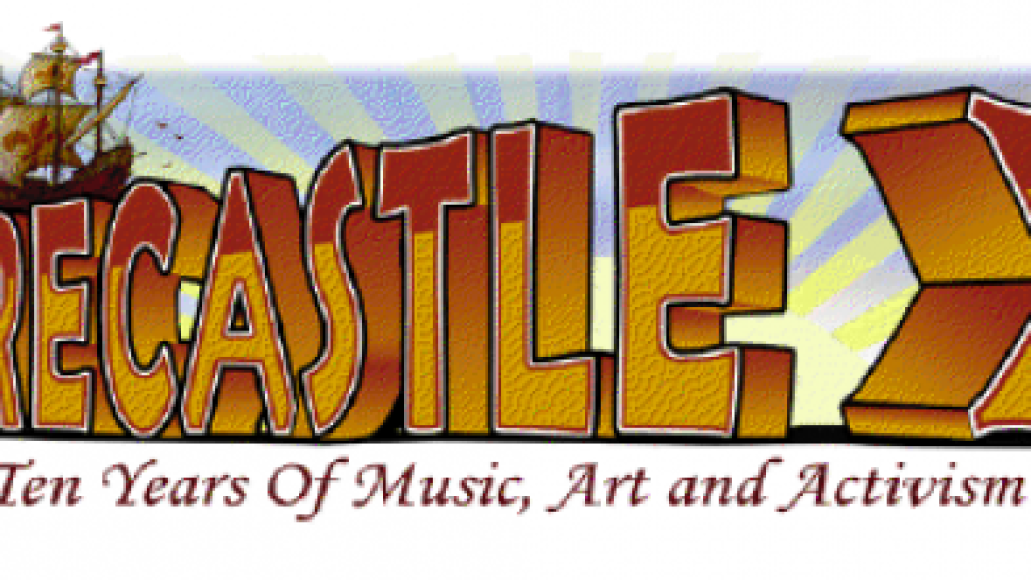 They say that if you lose a sense, your other senses get stronger. For example, if you’re blind, the story goes that you hear better than most people. It seemed apropos, then, that your intrepid reporting team here at Consequence of Sound ended up sharing our hotel for Louisville, Kentucky’s Forecastle Music Festival with an entire convention of blind people: They spend their lives listening hard, and though we’re able to see, we also put a lot of focus on the aural—especially this weekend.

Luckily Forecastle is focused on sound as well, and for their tenth anniversary, they turned on the Kentucky charm with local favorite sons like My Morning Jacket and cellist Ben Sollee. With other popular acts like Deer Tick, Wilco, and Justin Townes Earle, Americana and country rock would’ve been an appropriate theme for the weekend, but the festival also featured plenty of EDM, including music from Flying Lotus and Bassnectar. That split personality makes it hard to sum up the festival accurately, but what can we say? The crowd appeared happy, and while we love a good upright bass, we also danced our faces off to Girl Talk. It may not make sense on paper, but it was freaking awesome. 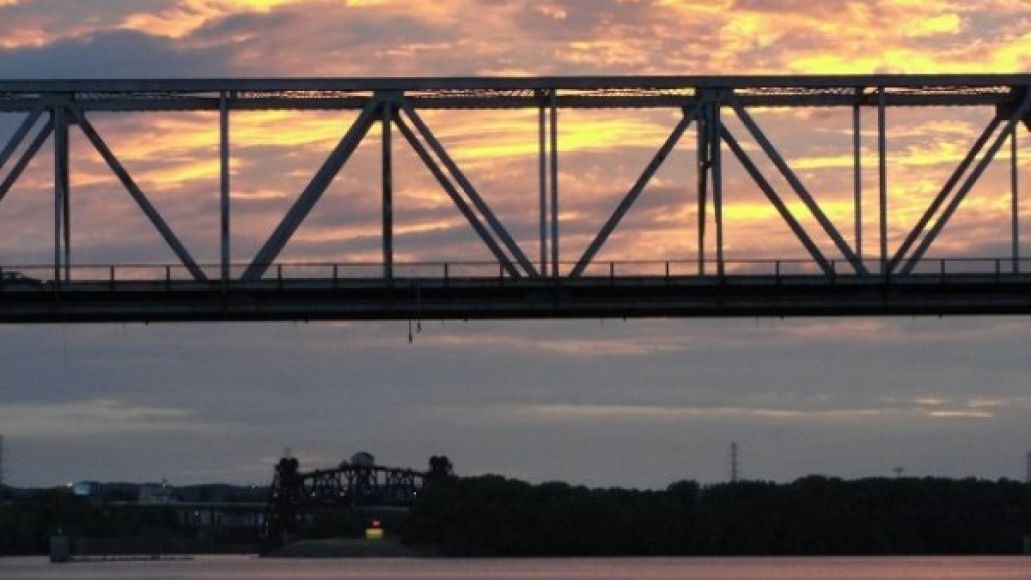 Our favorite thing about Kentucky, though, might’ve been the sunsets. We’re diehard Chicagoans, don’t get us wrong, but on our inaugural voyage to Louisville, we were struck by the natural beauty of the place. Waterfront Park is maybe a bit small for the festival—the sound from cross-stages bled through pretty badly at times—but it’s awfully pretty, with footpaths over a natural fountain (which you better believe people climbed into) and scenic bridges that span the Ohio River. At night, the sun sets over all of this, and the blaze of colors that ignites the sky is truly awe-inspiring—especially when you’re viewing it from in front of the main stage, listening to Andrew Bird sing about clouds.

So sit back and soak up some aural and some visual goodness (don’t worry, we took lots of photos) from our weekend at Forecastle. It may’ve been our first trip down to Louisville (and it was for a lot of bands too, apparently), but we’ll be coming back real soon, y’all. 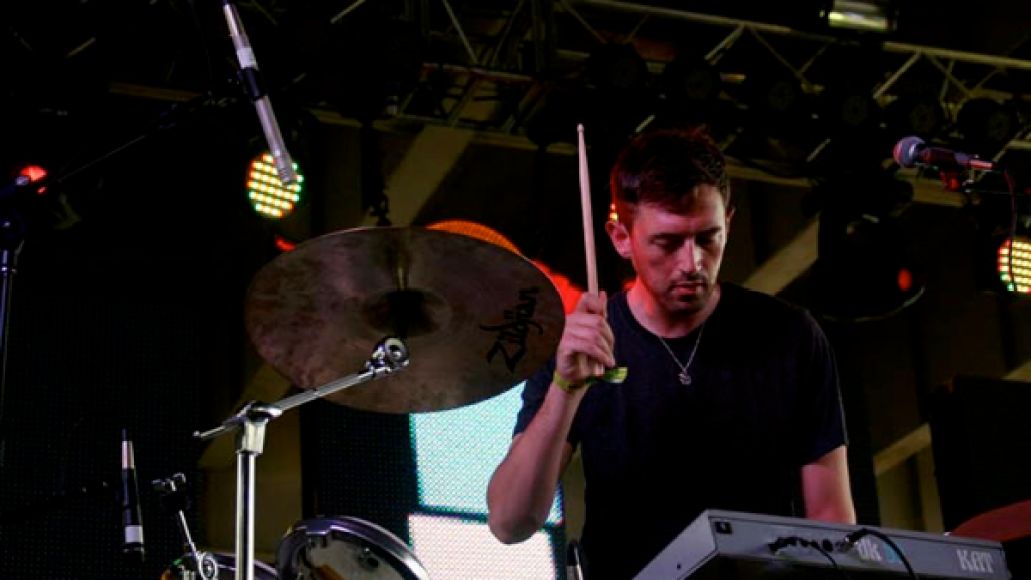 Brooklyn’s Tanlines went against the odds: They cracked open the first day of a festival, amidst dark, grey skies, and under a highway overpass where evening traffic lurched by overhead. ”This is a very nice way to start our day,” multi-instrumentalist Jesse Cohen observed. “It’s cloudy, but you can’t tell, right?” There wasn’t an ounce of sarcasm in his tone; in fact, it was his charming optimism that kept the energy high. While vocalist and guitarist Eric Emm pivoted around his microphone, mirroring the sentimental-yet-neurotic swagger of David Byrne, Cohen cracked jokes, danced about his rig of keyboards, electronic drums, and pedals, and flooded each track’s bottom with layers of instrumentation. The two performed the majority of their debut LP – this year’s delicious Mixed Emotions – with the ultimate highlight being the closing three-hit punch of “Real Life”, “Not the Same”, and “All of Me”. These days, guitars take backseat to sticky synth lines, and this duo’s work just fucking begs for Goo Gone. Basically, they set the bar high for everyone else to come — which just so happened to be everyone else. -Michael Roffman 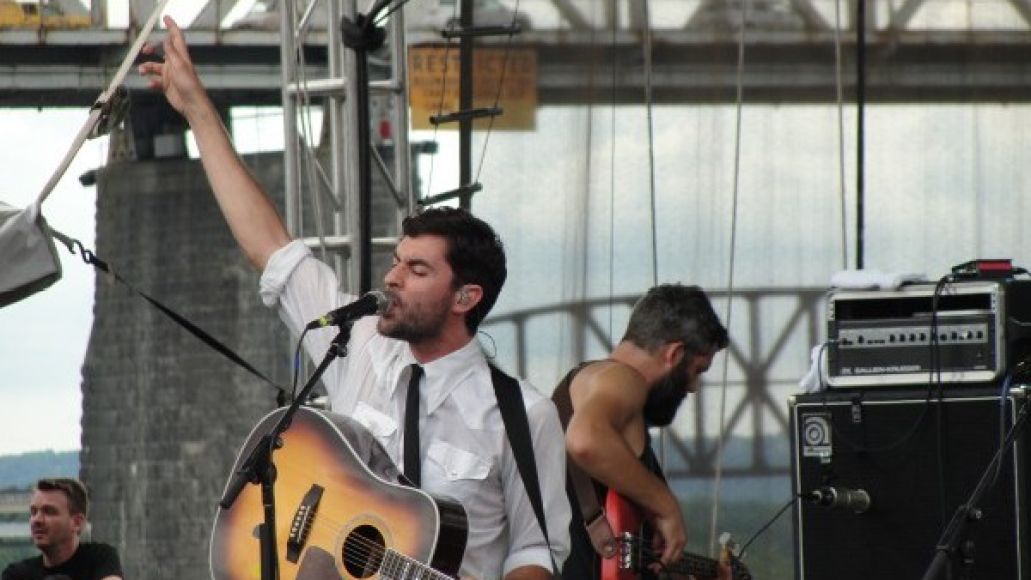 Seattle, WA’s The Head and the Heart took the Boom Stage just as the sun peeked through the dense cloud cover. A six-piece wearing its emotions on its collective sleeve, Head and the Heart was a little down-tempo generally for the party-ready crowd. They did get a positive reaction whenever they incorporated a brawling, bar-room keyboard style that morphed their standard indie-folk into a countrified stomper, which included a kicked-up version of “Couer D’Alene”. “Lost in My Mind” saw the drummer wailing on his kit with a maraca and one shirtless bro fist-pumping ecstatically along. Head and the Heart was joined on stage by Kentucky cellist Ben Sollee for “Winter Song” and closed with “Rivers and Roads”, which soared on vocals from the under-utilized Charity Rose Thielen, ending things on a literal high note. -Megan Ritt 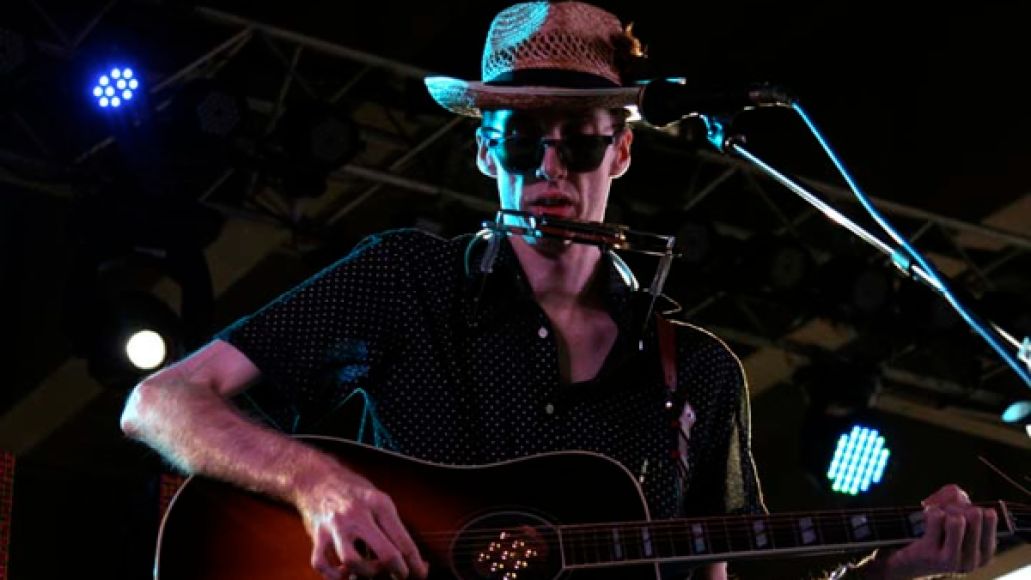 Bradford Cox’s side-project doesn’t particularly scream “outdoor music festival,” but the eccentric songwriter reveled in his unconventional setting: “I’d like to start with a song from Kentucky.” Behind some shades and covered by a chic straw hat, he strummed through Roscoe Holcombe’s take on the classic folk song, “The Moonshiner”, adding some unique flavor to his set. From there, he dove straight into a near-12 minute rendition of Parallax‘s hypnotic “Te Amo”, segueing straight into Logos classic “Walkabout”. Of course, he couldn’t not say something about performing underneath a highway overpass: “I feel like I’m playing in a parking lot of a mall — or a movie theater on a Friday night. Know what I mean?” Plenty did, as the hundreds that roped the stage shocked Cox with thunderous applause, especially when he decided to replay “Modern Aquatic Lovesongs”. Feeling his levels were too low, he protested: “I can only play the blues, but the digital blues.” Well, that’s one modern thing to champion. -Michael Roffman 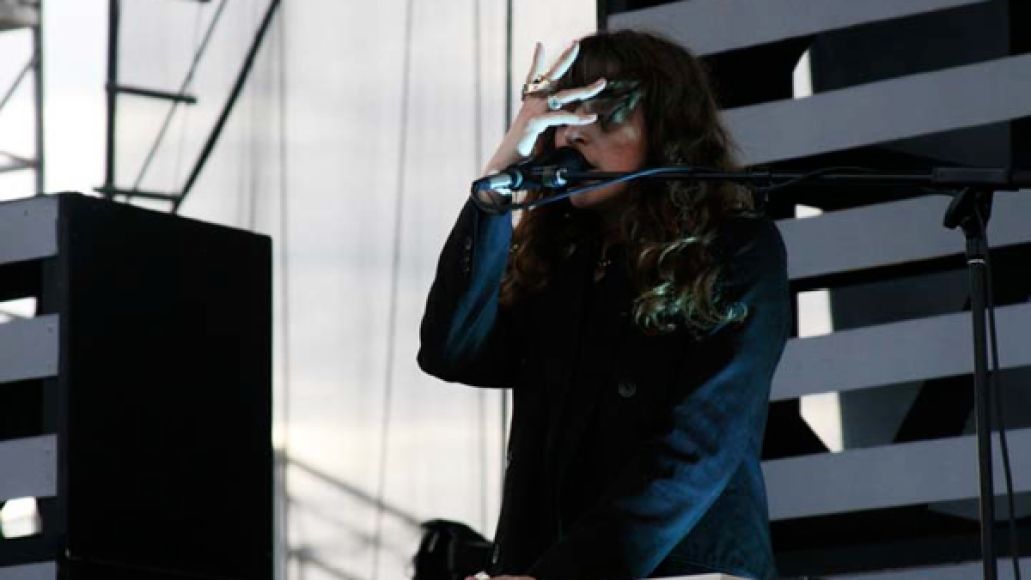 It was the set up of a lifetime: a stage next to the Ohio River (we’ll ignore the crab shack), a dying sun that ignited the skies in pinks and purples and oranges, and, well, Jan Hammer’s “Crockett’s Theme” on the PA. With Beach House, Victoria Legrand and Alex Scally have been crafting up dream pop since 2004, but in Louisville, KY they actually grasped the dream. Okay, so maybe that’s a big, lame overstatement, but it all felt really choice and quaint and picture perfect. It doesn’t help that the two opened with Bloom‘s “Wild” and Teen Dream‘s “Norway”, two fantasy themes that sparked rampant emotions with vivid immediacy. Somewhere in the middle, Scally warned that they “don’t do that cheesy crowd participation stuff,” and nobody seemed to mind, anyhow. That’s just it, though. It really isn’t about them; it’s about where they take you, and that’s why their latest LP, this year’s Bloom, might be their best yet. Tracks like “Other People”, “Wishes”, and especially the tear-tugging balladry of “Myth” toggle the mind across so many images, give a runaround through myriad emotions, and slowly envelope you. That translates even better on stage, and when there’s a Kentucky sunset bleeding away behind it all, there’s little one can do but gasp. -Michael Roffman 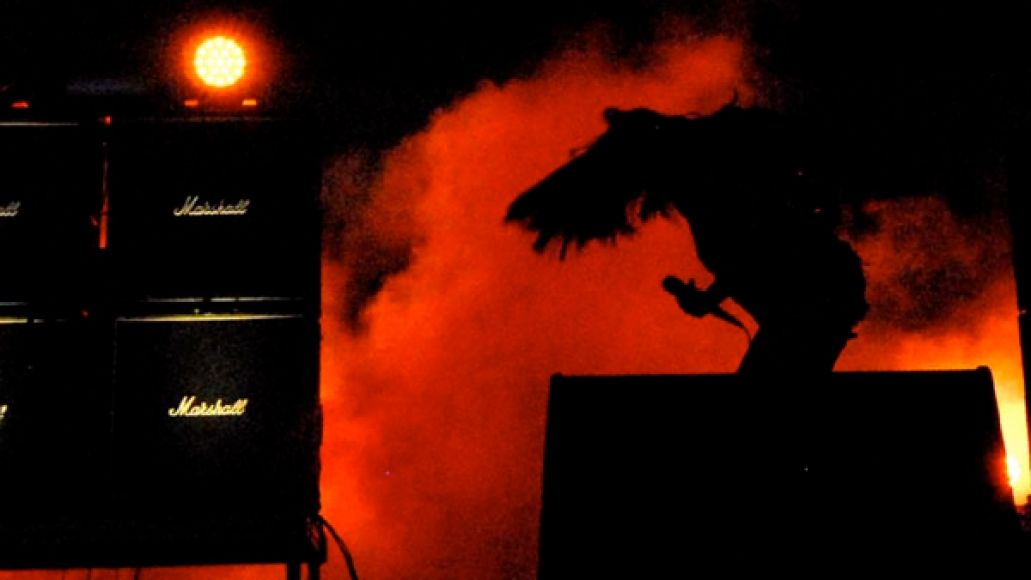 Eleven things I learned during Sleigh Bell’s set at Forecastle: 1. Alexis Krauss really wants this band to be a headliner, and they’re actually not too far off. 2. Their sophomore LP – this past February’s Reign of Terror – sounds even better live. 3. Tracks “Born to Lose”, “End of the Line”, and “Comeback Kid” add some perspective to Krauss, who gives new hope to the ADHD generation by never staying in one place for more than two seconds. 4. She knows how to scream, speak-sing, and shimmy. 5. She also knows kung-fu. 6. “Rill Rill” is for Sleigh Bells what “Patience” was for Guns N’ Roses — don’t think too hard on that one. 7. Guitarist Derek E. Miller still prefers things hardcore, at least judging from his Freddy Krueger-endorsed grinning during old flair like “Crown on the Ground” or “Tell ‘Em”. 8. Pretty sure “A/B Machines” is keeping this band from ever getting a real drummer. 9. Sleigh Bells’ smorgasbord of sound is the indie rock version of “hair metal” — meaning Krauss makes it really easy to just give two shits about the context of any of it and instead goes all or nothing for getting loud, vicious, and dirty. 10. The whole band also wouldn’t look out of place on LA’s Sunset Strip circa 1986. 11. Fingers crossed this hasn’t happened in an alternate reality. -Michael Roffman 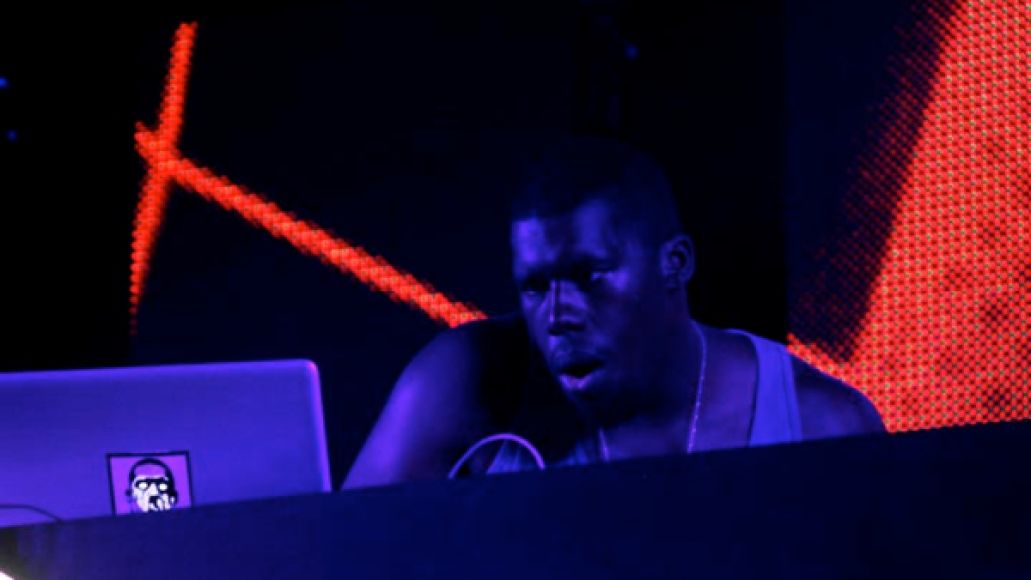 It’s possible to walk away from a Flying Lotus set unimpressed, but it’s impossible for one to do that and yet also say things like, “I love music.” That’s a harsh, declarative assessment, yet one with some weight to it. It starts with the artist: Steven Ellison, aka FlyLo. He’s too likable of a guy to shrug off — you know, sort of like the reasoning Jack Nicholson’s The Joker gives when he asks, “You wouldn’t hit a guy with glasses on, would you?”. Ellison doesn’t wear glasses, but he’s got the best smile of his genre, he air drums between transitions, and he’s savvy with samples. Throughout his hour set, again under the highway overpass, Ellison fiddled about with every sort of genre, hit, and what have you. Whatever you take away says a lot about your own tastes. For example, what I recall: Kanye and Jay-Z’s “Niggas in Paris”, Pharoahe Monch’s “Simon Says”, Beastie Boys’ “Intergalactic”, Portishead’s “Machine Gun”, and Radiohead’s “Idioteque”. That accounted for, at most, five minutes. The rest? Dance floor bliss, adored by hundreds who remained hungry for more. As Ellison stopped the beats and gazed about at the deafening applause, he calmly remarked: “That’s love right there.” He’s a quiet guy, but when he speaks, it’s nothing but the truth. -Michael Roffman 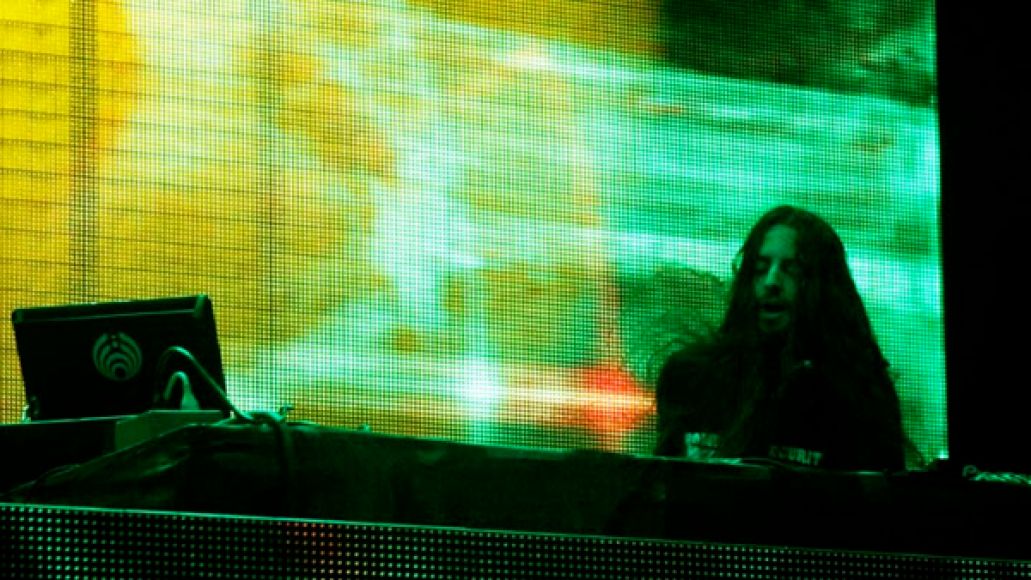 Flying Lotus was still playing as the lights came up on the Mast Stage, but Friday night headliner Bassnectar conquered the crowd in seconds. “It’s Friday the 13th—you guys feeling good?” he asked, and without waiting for an answer, slammed right into “The Matrix”. As is his trademark, he let the lyrics play a bit before editing them into oblivion: “We drop the bass in your face” gradually became just “drop”, which he’s got enough sense of humor to let hit on—you guessed it—the drop. The first time it hit, big and fat and deep, a flock of glowsticks exploded in the air overhead, showering down on the crowd. By the time the track ended, Bassnectar was a one-man festival, pumping beats into nearly every soul on the premises.

The formula works, and Bassnectar applied it all set long, breaking tracks down into their smallest composite sounds until all music seemed to exist for the sheer purpose of remixing. He played his remix of Ellie Goulding’s “Lights”, the Amp Live-featuring “Ugly”, and other sampled cuts that ran the gamut from Daft Punk’s “Technologic” to Blur’s “Song 2”. Bassnectar’s music at its height both looks and sounds like an artistic rendering of a seizure, all flashing lights and adrenaline-squeezing jolts of sound, high-pitched glitches, and squeals that shimmer as the vortex of sound builds higher and higher—all over a fuzzy bass beat that vibrates your teeth and rattles your spine. He gave the revelers simple directions: “Jump!” “Bounce!” “Scream if you’re happy to be alive right now!” And they jumped and bounced, and they screamed mightily into the night. -Megan Ritt

Festival Review: CoS at Forecastle 2012