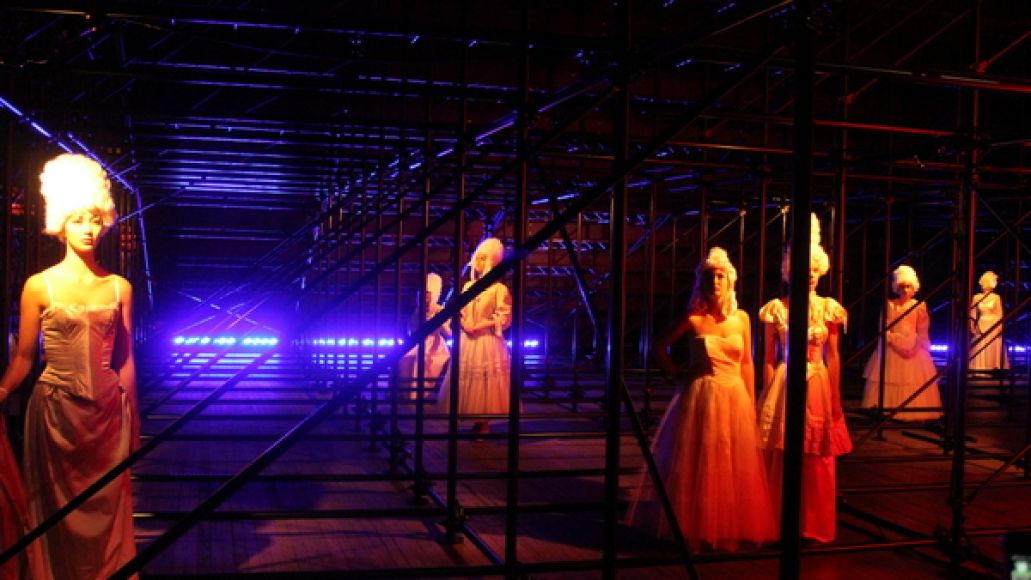 When a big-city orchestra like the New York Philharmonic programs a concert of exciting, bold, and risky avant-garde music, there’s always one Classical/Romantic piece, bubbling with tonality, to appease the subscribers and those who still bristle at the mere mention of Arnold Schoenberg’s name. I’ve seen too many performances of Brahms’ Symphony No. 1 just because I wanted to also catch some Webern or Stravinsky, Cowell or Ives, Carter or Ligeti. When programming an entire evening of spatial music — i.e. pieces that take advantage of a three-dimensional performance space and explore movements of sound — there aren’t any obvious choices from the accepted canon that fit.

It takes a visionary to realize that the finale to Act I of Mozart’s Don Giovanni, in which three different dances play simultaneously, is an ideal choice for a concert built around Karlheinz Stockhausen’s Gruppen, a work for three orchestras. Alan Gilbert, the Philharmonic’s music director and one of three conductors Saturday evening, has that inspired vision. 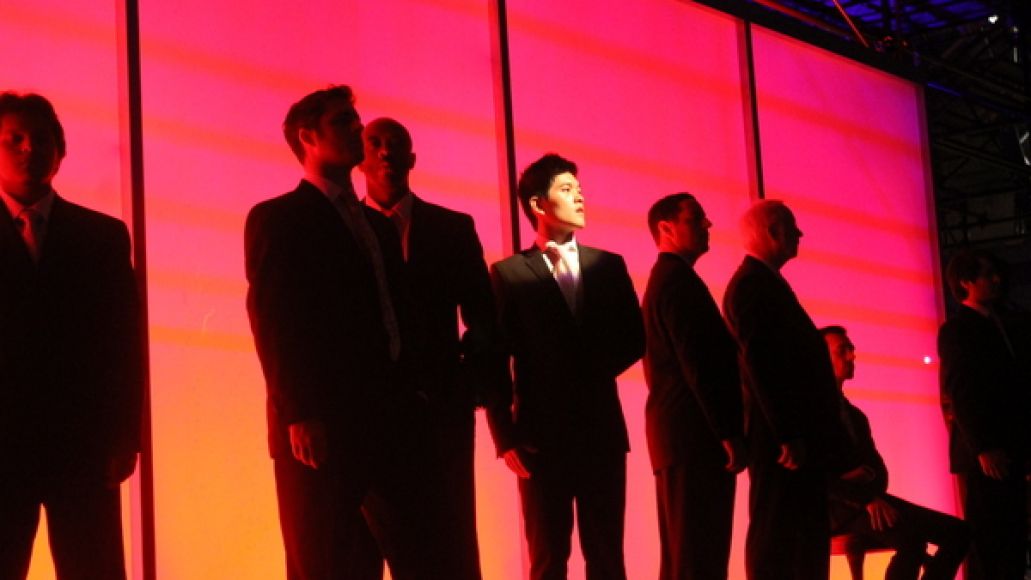 Yet the Mozart, which utilized the enlarged performance space to theatrical rather than musical effects, didn’t highlight the possibilities of music in space as much as works by Boulez, Ives, Giovanni Gabrieli, and the star of the evening, Stockhausen’s Gruppen. Each of these pieces took advantage of the cavernous space of the block-sized Park Avenue Armory in unique and divergent ways, surrounding and subsuming the audience with sound.

Gilbert began the evening with Canzona XVI by the Italian madrigalist Gabrieli, an instrumental piece originally written for an equally spacious room, St. Mark’s Cathedral in Venice. Gilbert conducted brass ensembles on all the three stages, weaving a tight polyphony of consonance in this 400-year-old piece, acclimating the audience’s ears and mind to the sounds and nuances of music in such a large space coming from a variety of directions. 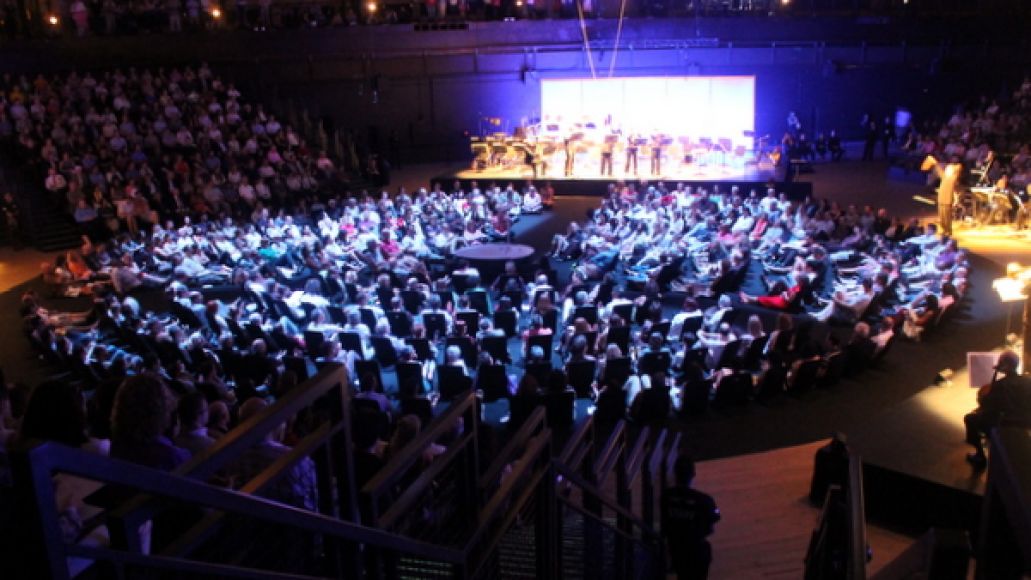 The directional orientation of the music became the driving force behind Boulez’s Rituel in Memoriam Bruno Maderna, written to memorialize the man who conducted Gruppen alongside Boulez and Stockhausen at its 1958 premiere. Gilbert placed eight small chamber groups on balconies, atop bleachers, and throughout the three stages, directing the piece from a center podium more like a coordinator rather than a conductor.

Each ensemble occupied its own timbral world, emplacing categories of orchestral sound into the enormous space of the hall. A mantra of tuned gongs anchored the piece, which centered around a snap-like two-note motif that each group traded and gradually accumulated before cutting off abruptly. Yet the piece had a welcome mellowness and delicacy that is not always found in Boulez; despite its dissonance, the relatively long durations of notes and the pregnant silences between sections created something meditative and hypnotic, and nearly transcendent but for perhaps too much repetition. 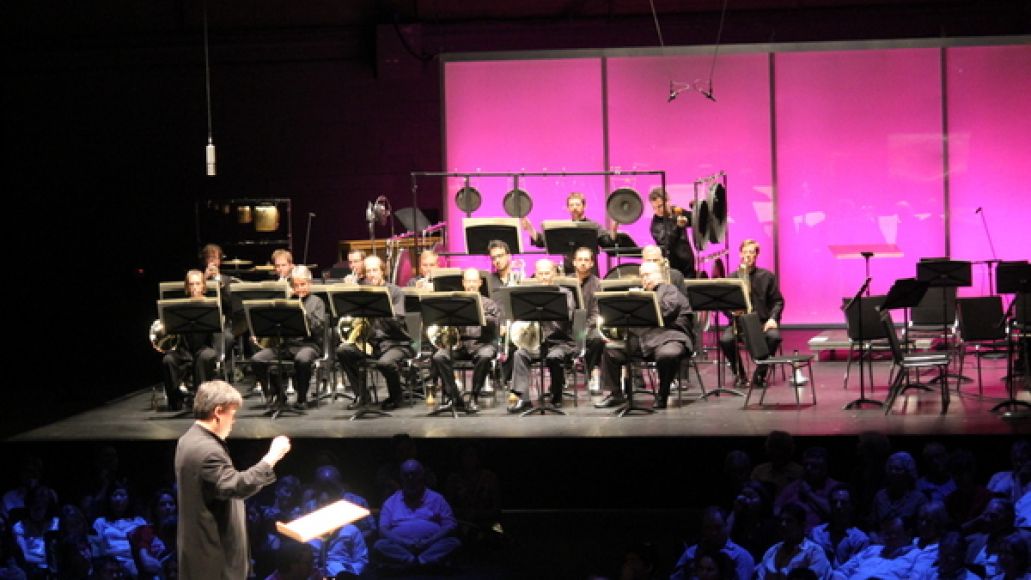 After such a thorough exploration of music moving in and through space, the Mozart opera scene broke down the restraints of an opera stage, rather than further plumbing the sonic space. The work’s librettist, Lorenzo da Ponte, might have loved this performance, as it was truer to his dramaturgical intent than the confines of the stage, more cinematic in a way, as if Don Giovanni, his loves, and his revenge-seekers were actually moving through a large ballroom. While their voices occasionally got lost in the great expanse, the singers took full advantage of the space, ending with an epic Don Giovanni vs. the world standoff in the center of the room.

Mozart might have been a crowd pleaser, but the main event was Stockhausen’s Gruppen, the thorny and complex but fascinating landmark of the 1950s avant-garde. Rarely programmed because of its performance requirements (not to mention difficulty), Gruppen came alive in the three-orchestra setting in a way that it never could (or has) on recording. Sometimes one group would finish another’s musical thought, sometimes a single idea or sound would be quickly tossed around the room. Frequently one orchestra built on another’s intensity, drawing the audience’s attention to and fro like a tennis match. 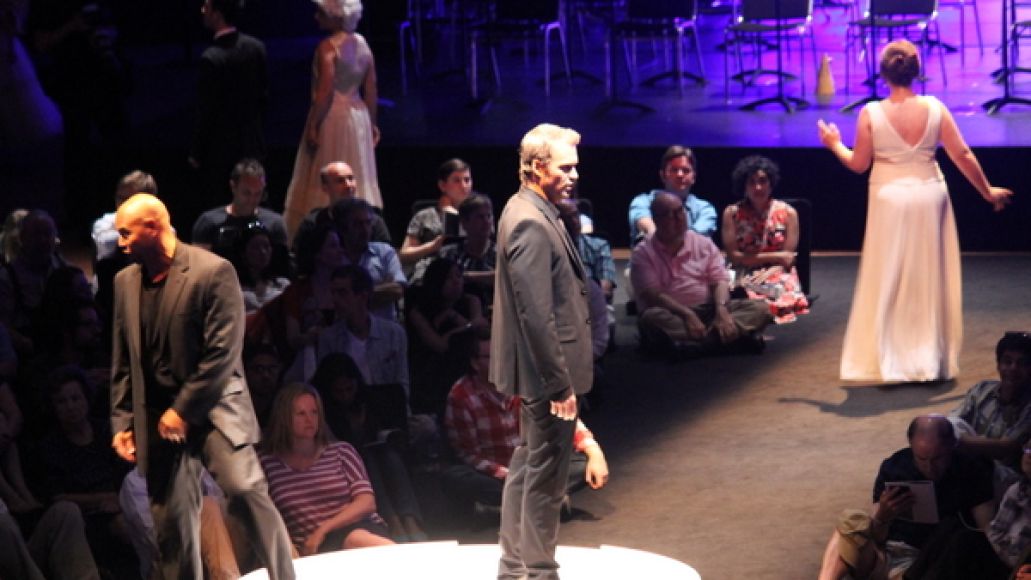 Stockhausen’s music is highly dissonant and flies by in extremely fast passages, and he ups the modernist ante by writing at different speeds, producing a near cacophony. Yet Gruppen as a performance is different than Gruppen as a composition. Certain sections stood out as sound moved from stage to stage: a passage for trumpets on each stage at differing tempi felt like a competition, while large swells of full orchestral sound whooshing across the room felt like a coordinated gust of musical wind.

Charles Ives’ contemplative The Unanswered Question cooled the extreme dissonance of Stockhausen. Despite its honor as Ives’ “greatest hit” for modern-day performances, the piece was still changed by having three string orchestras play the plaintive background chords, over which a solo trumpet’s question and a series of increasingly frustrated flute answers duel. The trumpet wafted in from a balcony at the top and back of the venue, filling the room. Ives calls the strings “the silence of the druids,” as they are often relegated to a hushed ensemble onstage. Yet in the spatial soundscape, they became the omnipresence of the gods, enveloping the room with their harmonic pondering. 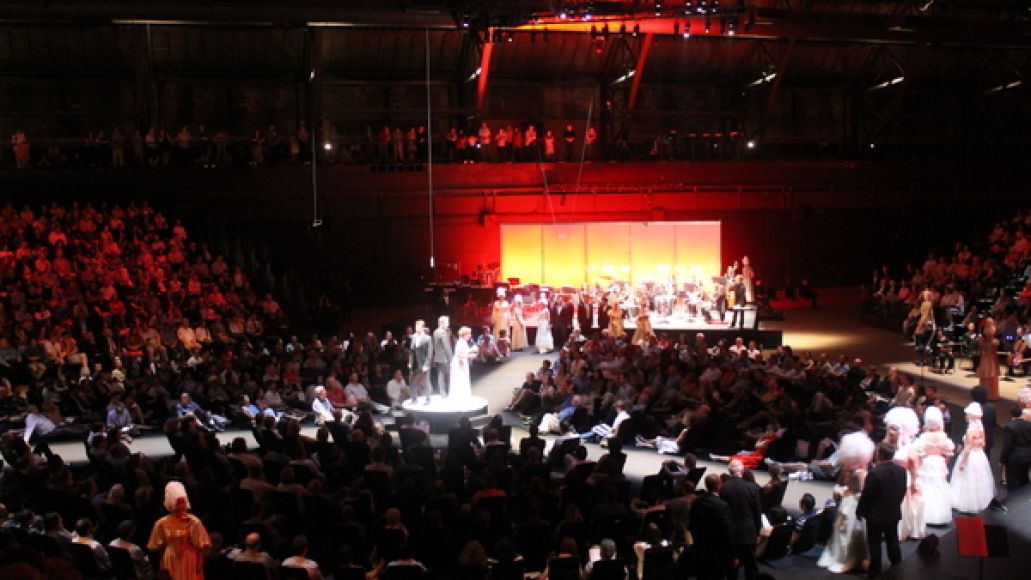 Gilbert managed to find five pieces from disparate composers, eras, and nationalities that each test the possibilities of spatial music. Yet the Philharmonic’s masterful playing of some exceedingly difficult passages was equally vital to the evening’s success. Following last year’s fully staged performance of Ligeti’s Le Grand Macabre, Gilbert and the NY Phil are proving themselves to be a leading orchestra of contemporary music performances, and new music lovers can only hope these trends permeate their regular season programming too.