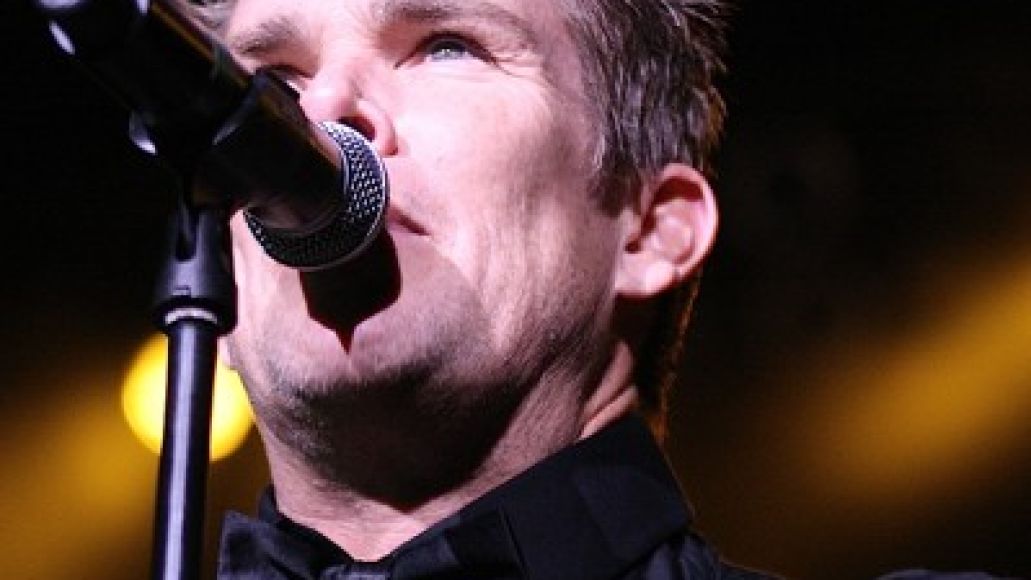 At the tender age of 12, one of my closest friends decorated her birthday cake with a picture of Mark McGrath. If you spent any time around popular culture in the ‘90s, you’ve probably seen it: the smirk that launched a thousand Candie’s ads, frosted tips, and Fruit of the Loom boxers down to there. I knew that picture well because it was also plastered above my friend’s guest bed, along with wall-to-wall cutouts from the pages of Twist and Seventeen of celebs like Sisqo, Josh Hartnett, and James Van Der Beek. McGrath was her one true crush, though, and that night she requested a slice of cake from the region directly below his sculpted abs to our shrieky, prepubescent delight.

So it was kind of a mindfuck to actually see McGrath’s crotch in person, 13 years later, two feet away from my camera. “It smells like Bob Marley’s favorite habit, and I’m not talking about his guitar collecting!” he bellowed, awkwardly stride-skipping to the other side of the stage. “And it smells like some people over here want to hear the number one song from 1999!” It felt like I had been sucked, Tron-like, into a boombox spinning Now That’s What I Call Music Vol. 2-7. 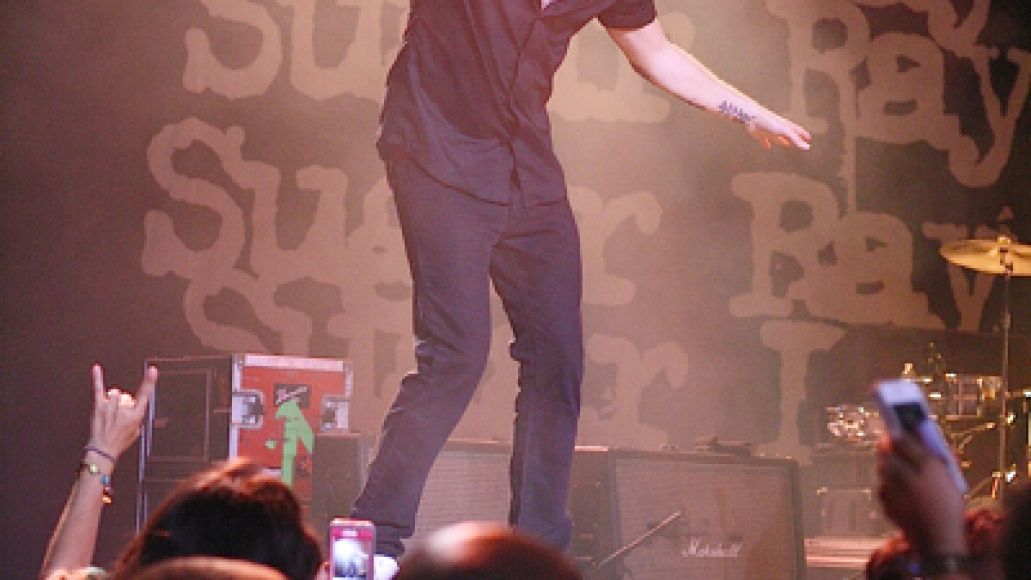 We had come to Holmdel, NJ to see Lit, Marcy Playground, Gin Blossoms, Sugar Ray, and Everclear (!) at the the inaugural Summerland Tour. I picked a venue in New Jersey as opposed to the more proximal and hip Roseland Ballroom because I was hoping, as one reviewer wrote on a message board, that it would be a “typical Jersey rock concert, people get drunk and argue over which one of them is the father of Snooki’s child.” It turns out it was a fitting venue for a different reason: According to Everclear frontman Art Alexakis, who co-curated Summerland with McGrath and introduced Sugar Ray, the 8,000-strong audience at the PNC Bank Arts Center was their highest turnout for the tour.

The friendly, primped woman next to me, who introduced herself as Maria, certainly seemed to be from a parallel universe. She snapped pictures with her flip-phone and drank a Smirnoff Ice over the lip of the barrier between her and the security guards. She could almost pull down McGrath’s pants if she reached far enough. “She’s putting on lip gloss for Mark!” Maria squealed when I bent down to switch lenses and, sure, apply some Chapstick. “Isn’t he gorgeous? Will you send me pictures?” Of course, I replied.

“She’s going to send us pictures of Mark!” Maria told her friends, all of whom were about a foot shorter and 20 years older than I. One of them, who arranged her facial features somewhere between brokenhearted and apoplectic when my press escort told her to move out of my way, lit up immediately. They were probably the first to scream when Sugar Ray broke into “Every Morning” and “When It’s Over”. “It is so fucking rad to hear you guys sing along,” McGrath said, reaching out to touch the audience’s ecstatic hands. “I’m surprised at how many of their songs I know,” my friend told me after we belted out the wicky wicky wa, wicky wa guitar part of the chorus to “Fly”. 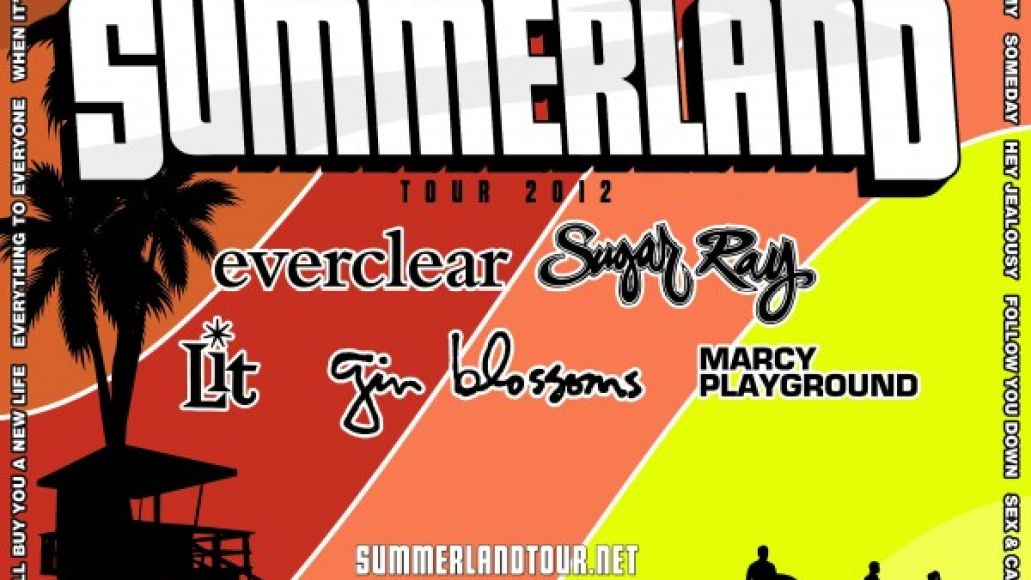 In theory, this was supposed to be just another reunion tour, no different from those of Aerosmith or The Beach Boys or My Bloody Valentine. In reality, as anyone who’s watched that scene in Empire Records where Corey and AJ dance on the roof to Gin Blossoms’ “Til I Hear It From You” can attest, it’s so much more.

“Every decade has their nostalgia tour. The Turtles have their ‘60s tour, Ringo [Starr] brings back the ‘70s, Poison and REO Speedwagon represent the ‘80s, but no one has galvanized the beautiful music of the ‘90s. There was such a hangover with the ‘90s at the end of the millennium. The music industry imploded and they weren’t building any new rock stars. You’ve got about 50 million records sold among [these acts]. The value is there,” Mark McGrath said in an interview earlier this month. Despite his brazen exclusion of other “beautiful music of the ’90s” like, you know, Dinosaur Jr., The Afghan Whigs, and Green Day, all of whom are currently touring and coming out with new material, he’s right. It is remarkable that this sect of bands from the ’90s never toured together before now.

I braved traffic, tolls, and Staten Island for Summerland not to revel in my nostalgia, but to examine it from a critical perspective. And I found out  it’s a lot harder than I thought. After Sugar Ray left the stage to the “Fresh Prince” theme song (McGrath didn’t know many of the words yet continued to sing along, Solo cup in hand, after the rest of his band left the stage), I asked my friend, “Was that a good show?” 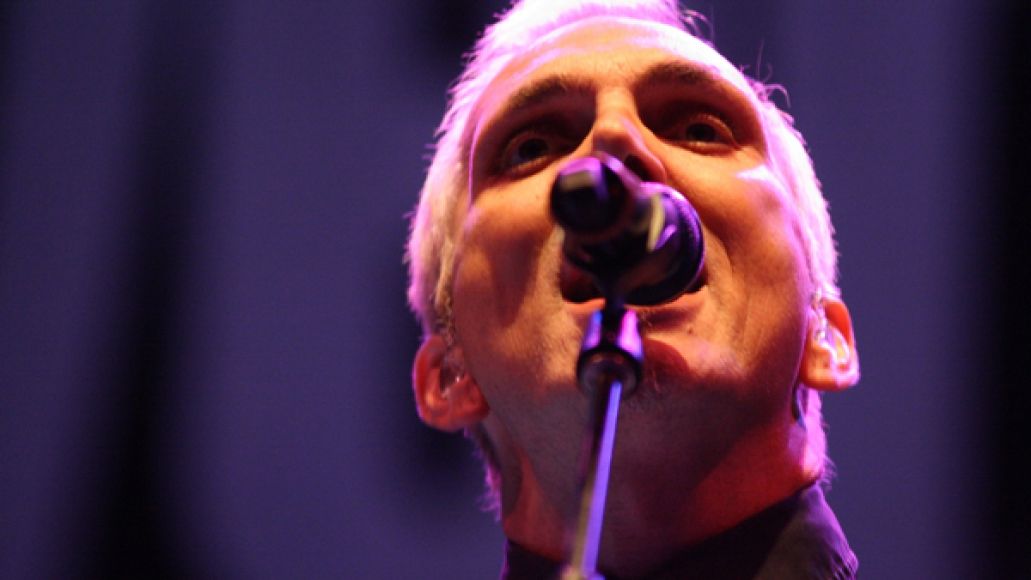 It was a legitimate question: Sugar Ray faithfully rendered their hits and easily pleased the audience. They didn’t seem to mind, as I did, that they committed rock sacrilege by covering The Ramones’ “Blitzkrieg Bop” and The Beasties’ “(You Gotta) Fight For Your Right (To Party)”. They pulled two attendees onstage– one of whom was named Nadir, as in, “It’s difficult to tell if the Summerland Tour represents the apex or nadir of the current 1990s revival”— to karaoke to The Black Eyed Peas’ “I Gotta Feeling”. And they’ve been doing that shtick for. Every. Show. On the Summerland Tour.

The point is, even if Sugar Ray’s performance was “fair to middling,” as my concert companion duly noted, the urge to sing along to these songs that soundtracked my primordial musical youth was as visceral as performing a bodily function. Even now, as I type this, I compulsively turned up the volume and pounded my fists on the desk to “Under the Sun” (another from 2001’s Sugar Ray that, unfortunately, didn’t make the live cut), singing along to the “Naa naa naa”‘s because you just can’t not. And that, in a nutshell, is the premise for the Summerland Tour. You just can’t not go. You’d be denying your former self the privilege of killing all your favorite bands with one stone, not to mention hearing them over the amphitheater’s soundsystem: POD’s “Alive”, Stone Temple Pilots’ “Plush”, and “Bound for the Floor” by Local H (remember them? Because I sure didn’t, not until I heard the telltale “copacetic”) were just a few of the gems that passed the time between sets. 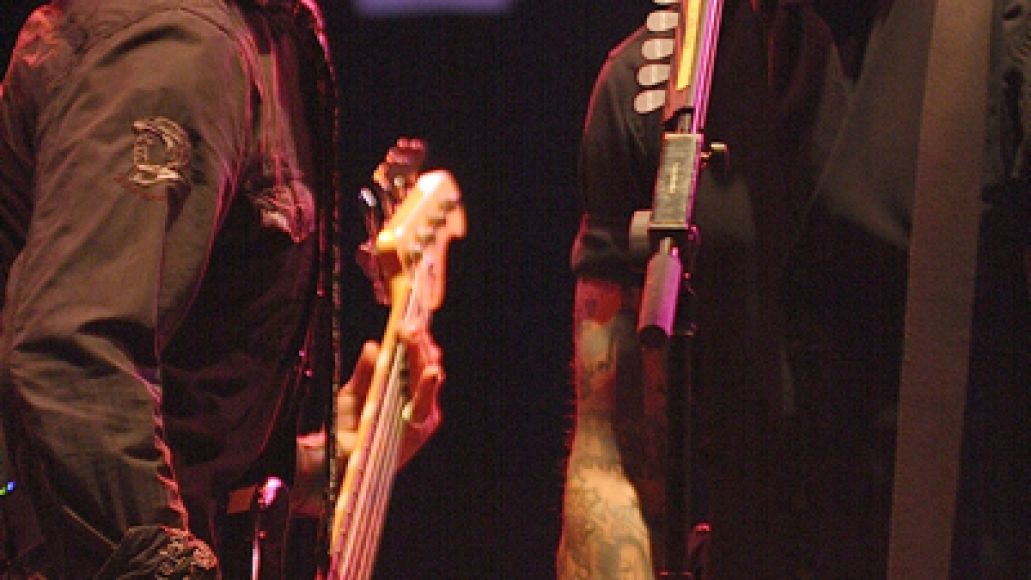 The interstitial songs were still preserved in the amber of rose-colored glasses– or shall we say, like “a new car, perfect, shiny, and new”— and I wish I could say the same for the living, breathing Alexakis, whose band took the stage promptly at 10:15 p.m. His soul patch may have stood the test of time, but his vocal chords have not. The rounded, raspy affect that used to resemble Caleb Followill’s circa Youth and Young Manhood sounded blunted and loud, rendering “Father of Mine” in unflattering shades of off-key. Everclear’s lyrics still ring as true as their name, as I discovered when I got a little verklempt during “I Will Buy You A New Life”. Maybe that was because he wound up like a heckled pitcher beforehand, saying, “This song goes out to anyone who’s ever been in love. This song goes out to you fans of the ’90s, you. This song goes out to Mark’s acid trip that inspired Summerland,” etc. as concertgoers sat down or trickled out of the amphitheater. In keeping with the covers/guests theme, and perhaps as a last-ditch attempt to keep too many people from leaving, Alexakis pulled on Lit’s A. Jay Popoff to sing Led Zeppelin’s “Rock and Roll”. Which is what made us leave.

There’s a lot more to say. Scott Johnson from Gin Blossoms sang lead on “Fly” and Everclear also played “Heroin Girl” and songs from their new album, Invisible Stars; underage drinking was such a concern that my legitimate Minnesota driver’s license had to be cross-checked with a reference book and a blacklight; and due to unforeseen circumstances– like arguing with the toll operator about why, exactly, I had to pay for the New Jersey Turnpike, Garden State Parkway, and Lincoln Tunnel when they’re all part of the same goddamn highway system– I missed Lit and Marcy Playground. 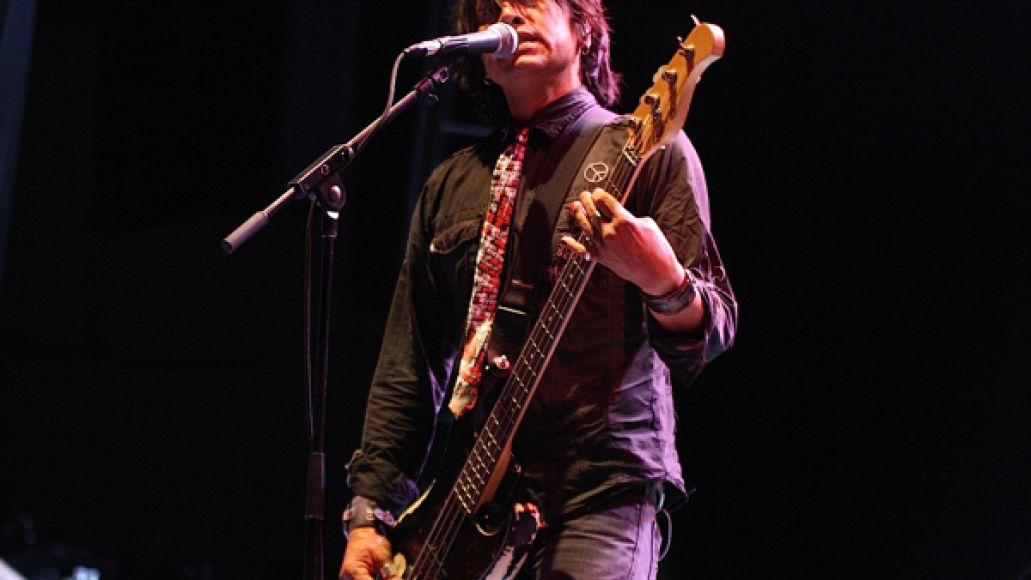 Of all the evening’s disappointments, that was the biggest. I would have loved to sing along with the rest of the audience to “My Own Worst Enemy” or “Miserable” and attempt to harmonize with John Wozniak on “Sex and Candy”, to experience the same timeless, out-of-body catharsis I felt during Gin Blossoms’ “Hey Jealousy”. But there’s a reason you’re supposed to read the book before you see the movie, and why nostalgia is primarily a temporal yearning. If and when I listen to 14:59, I’m going to remember McGrath’s wince-inducing emceeing when I’d rather remember him as eye candy/Candie’s/cake who wrote killer hooks on “Falls Apart” and, come on, “Abracadabra”.

Maybe it’s for the better that Lit and Marcy Playground were spared my judgment. That’s the thing about nostalgia: Nothing, not even the thing itself, stands up to memories of hearing songs, even if in reality they weren’t nearly as glossy and perfect as movies about music in the ’90s. As Popoff said, “The ’90s were the perfect time for people that were just maybe old enough to get into music.” So let’s keep it that way. Unless, of course, Summerland nabs Smash Mouth next year.